This incredible instrument, hanging in a private home for the past thirty years, came to my attention in February, 2003. It appears to be all original (except for a top repair patch), but unfortunately is missing the nut and bridge. Luckily, it was well played, as the heavy fret wear from the strings provides the only clue as to the original stringing. However, I still can’t say with absolute certainty what instrument Knutsen intended it to be, nor how he originally tuned it.

At first glance, it appeared to be a 14-string harp mandolin with a shorter neck. While 12-string mandolins (three strings per course) were once a somewhat common variation, the two additional strings on this would seem superfluous. Neither did the scale length of 12" match up with Knutsen’s mandolins (normally 13-3/4" to 14"). Nor did I suspect Knutsen of attempting the rare piccolo mandolin with so many strings (and which have a 10" scale besides). My only hope (and thought) was "please let there be fret wear!" Alan Frazier, the owner, gamely threw himself into the investigation by photographing the frets through a 50 power microscope to look for any telltale grooves created by the strings. Unfortunately, it turned out that someone had filed down the frets toward the treble side, erasing much of the evidence. However, with a reference ruler included, I was able to assemble the entire third fret in Photoshop and, after some lengthy number-crunching, calculate with a high degree of probability the arrangement (and even gauges) of the original strings (presented below). Finally, after much careful consideration - including the unusual length of the neck, the number of strings, and now the string layout (6 courses) - I concluded that this instrument was most likely Knutsen’s version of the well-known Spanish bandurria.
As it differs from the traditional bandurria in a couple of ways (besides the obvious Knutsen harp-mandolin shape), let me explain my line of reasoning by discussing clues provided by historical context, and the features of bandurrias (and relatives) themselves.

The bandurria is the instrument played by the infamous "Spanish Students," a touring group who took our country by storm in 1880 and ultimately inspired the subsequent Mandolin Orchestra craze. As the bandurria was considered a musical counterpart to the mandolin, Americans chose to simply use the Neapolitan mandolin (and later flat- or arched-back mandolins) to recreate the sound in mandolin clubs and orchestras. Even so, the bandurria was well enough known that some American manufacturers made them on a custom or limited basis. Specifically (and Readers, please let me know of any others).

The Martin Company built three of them in 1904 for a San Francisco retailer.
Lyon & Healy built the Lakeside brand bandurria in my collection – the Lakeside name dating it from approximately 1900 to the mid ‘twenties.
And, perhaps most significant to our story, Knutsen's Los Angeles neighbors during the same time period, The Schireson Brothers, built bandurria and laud-type instruments ca. 1911-1920s. The Spanish laud is similar, but tuned an octave lower, and traditionally has f-holes surrounding a teardrop-shaped soundhole. The six courses are sometimes tripled (18 strings total). 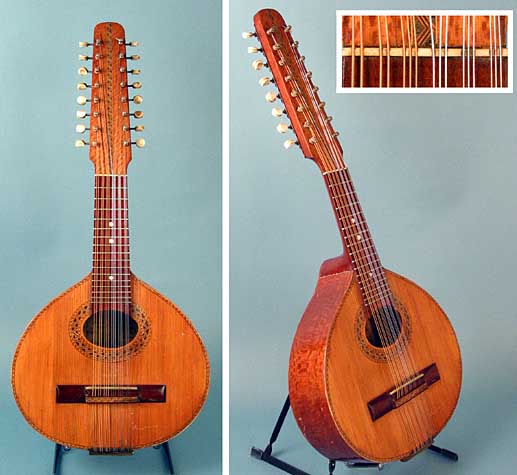 The Knutsen instrument has fourteen strings arranged in six courses. But what a strange arrangement! The tripled strings may have occurred on the fifth and sixth courses, or perhaps more likely, on the first and fifth courses. Regardless, the tripled fifth course is definite - but whereas in bandurrias and bandolas the strings within courses are tuned in unison, Knutsen’s fifth course consists of two low (normal) strings with a high octave string. Finally, where bandurrias’ 6th-1st courses are tuned low-to-high, Knutsen’s 6th course (whether double or triple) seems to have been strung and tuned an octave higher than normal (as in a ukulele re-entrant tuning). It’s as if he was asked (or chose) to build a combination of bandurria, tiple and mandolin. Nevertheless, I am sticking with "harp bandurria" as this remains the most similar instrument when all the evidence is weighed.

Click on a picture to enlarge
(all images of HBA1 copyright Alan Frazier, all other images copyright Gregg Miner)