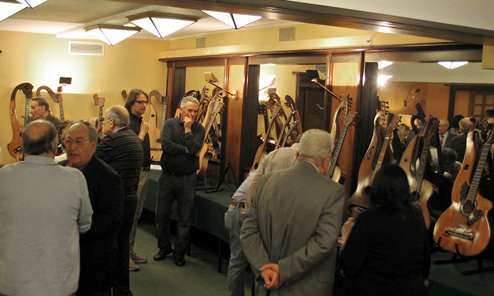 We left off at lunchtime after a relaxing yet exhilarating free morning on Day 8 – but now things were going to get a whole lot more exciting!

As I said earlier, Franco wasn’t just helping Jaci and me enjoy a first-time vacation trip to Genoa, he had specifically planned a full harp guitar itinerary for me, which included putting me to work!  He apparently figured that my visit would be a good excuse to garner a little more interest in Taraffo and his music, via the “forgotten harp guitars” (forgotten in Taraffo’s own city to all but some dedicated guitar builders and collectors).

He may have hinted at this in a preparatory email, but I obviously missed the gist, as I was told I needed to prepare a lecture that Sylvia would translate live for the audience.  Luckily – as any Gathering-goer knows – this is the kind of thing I can take and run with!

I was told we were not to help but to just show up on the dot, but I still went early so I could photograph instruments before things got too crazy (it still did, and in the melee, my tripod was kicked over and our $800 Canon was destroyed…luckily Jaci had her smaller Canon as backup).

Once Franco had all the instruments set up to his liking, I took a series to later stitch together to show them all.

I was snapping photos even then.  Here are some new instruments for the site:

A 1916 Gazzo, brought by Carlos Pierini, of the local Guitarland store.  A bit beat, with a strange patch and chewed-out soundhole (from a pickup?), but still useful for our research.

Another Gazzo from 1919, loaned by Beppe Gambetta.  We didn’t discuss it, but obviously, the bridge and headstocks are replaced; the fingerboard as well.

Not a harp guitar, of course, but I wasn’t about to hide it under the table.  This prize is also owned by Carlos Pierini, who has been researching it.  The necks are likely intended for standard and terz tunings?  The maker is Victorin Drasseg, from Bregenz, Austria, and he dates it to 1820-1840.  I found another from 1841 listed in a museum.  Carlos’ placard also mentioned “Staufer shop,” though I’m not sure what the connection is, beyond the Staufer-style headstocks.

Here is an important 1898 Oreste Candi (Genoa; brother to the even more important Cesare Candi), loaned by Fabrizio Giudice.

This 1916 Gazzo has been on the Gazzo page for a while.  It was loaned by Renato Ceccherelli.  Originally having 6 basses, someone long ago decided to add a 7th by adding the interesting extension and moving the 6th there along with the new 7th.

I was thrilled to see this little gem there.  A rather crude, handmade Gazzo copy that was nevertheless used very successfully by a local musician, Giorgio Bianchi (1913-1979; his full story appears on the Gazzo page).  When meeting the owner, nephew Mauro Pittaluga, he seemed genuinely tickled to tell me “I own the harp guitar you made fun of on the site!”  Happy to oblige, Mauro, and yes, I call them like I see them!

Mauro also displayed a beautiful book he produced with all the family photos (those that include instruments have already been up on the site).  A priceless snapshot of the period!

This instrument is by a new maker for our encyclopedia – unfortunately, I didn’t grab a shot of the placard, and notes are buried somewhere…so I’ll have to get back to you on this one (Franco, can you help me out here?).  It was very wide, about 19″ and was for sale.  Had the headstock not been replaced with an inappropriate modern set-up, I would have been all over it.

I finally got to see Beppe’s reproduction (by Antonello Saccu) of Taraffo’s guitar.  Actually, it’s not intended as a true reproduction, as Beppe wanted it to look like a Gazzo but play and sound like his Taylor.  So steel strings and a modern bridge and headstock alter the vibe just a bit!  Another difference was that Taraffo was short and Beppe is some 6 feet+ tall – I had to stand on tiptoes to demonstrate this.  Still, the stand (copied from the Rinaldo Taraffo instrument) is amazingly authentic, as is the sub-bass carving.

This gentleman, Michele Taddei, is a local postman, and sort of an Italian John Doan.  He commissioned this instrument from Antonello Saccu in 2002.  The low strings are a series of 3 or so arpeggios/scales.

Back to the show…Franco discusses the instrument and stand of Pasquale Taraffo’s brother, Rinaldo.

Franco next had Beppe tell a bit about his own Taraffo interests and activities.  Beppe then introduced me – an honor!

I was lucky to see Beppe at all, as he was scrambling to prepare for a huge 2-day guitar festival which he had set up himself.

Here I am, immediately going “off script” while Sylvia achieves new heights of translation.

I did some additional show and tell on specific instruments.  Here of course I am explaining why this isn’t a harp guitar (while asking “Who owns this? I want it!”).  Perhaps that explains why I look overly-animated (and eerily like one of those kids in that horror movie “The Ring”).

This shot includes most of the instrument donors.  On my left is Mauro (the Bianchi hand-made instrument) and to his left, Marco, who you remember from Episode 8, who came with that nice Giacinti.  To his left, ignoring the camera is Marco Bazzotti of Milan, a guitar researcher who is a great friend and help to our harp guitar cause.  Far right is Fabrizio Giudice, who you may remember did a transcription of Taraffo’s music (below).

He signed a copy for me.  Unfortunately, he and the publisher opted for just 6-string versions of the famous solos (argh!).

The “Taraffo Club”: Antonello, me, Franco, Beppe, Enrico (he and his father also spoke about guitarists who followed Taraffo, some of which Enrico has interviewed), and Fabrizio.

As I mentioned way back, Franco managed to get us coverage in the next day’s paper.  Here is a translation.

All in all, a great success and momentous occasion.  Bravissimo to all who participated!  And a huge thanks to Franco for the first-ever “gathering” of harp guitars and aficionados in Italy!

Next week: A Tearful Goodbye: Our last day, including last site-seeing,  friends, and yes, a couple last harp guitars.