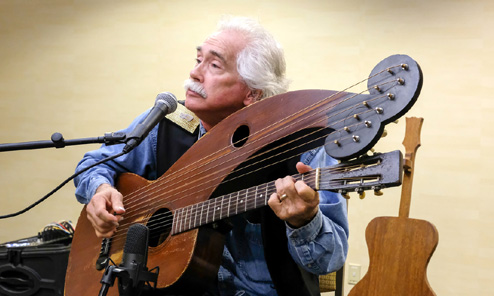 Just like my last blog, guest-penned by Martin Pleass, today’s is another guest spot by Martin’s U.K. partner-in-crime, Tommy Loose. Even though he’s across the globe in China (his day job), he still managed to get this in! 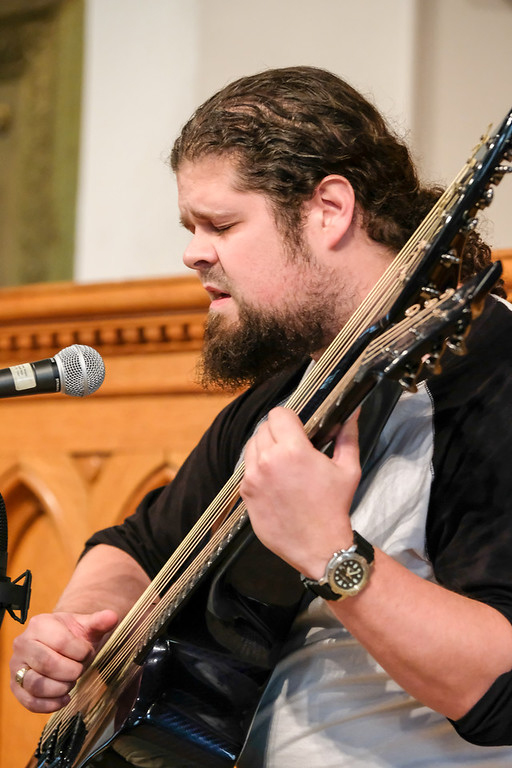 You may remember Tommy (above), last year’s “Newbie” who not only played on stage for his first visit but later contributed an HGG15 write-up (as only he could). We enjoyed him so much we asked him back as a feature this year. Maybe he felt guilty, because he wrote another blog for us. This one’s an interesting take on a popular subject: Harp Guitar Workshops. Enjoy, then be inspired, then see you next year in North Carolina!

I got my first harp guitar back in 2011. It wasn’t the most stable of instruments in terms of tuning or anything else really, but it was most certainly good enough to get me on the right track. I couldn’t wait to unpack it and start learning some cool harp guitar tunes. My daughter, who was 4 at the time, instantly asked me to play her something when she saw it. My heart sunk a little when I realised that wasn’t gonna happen just yet, but I got to work….YouTube!

Upon visiting the site, I searched Andy McKee. After all, he was the only person I’d seen play one at this point. But after a few minutes and Googling, it became very obvious that he was far from the only player of this wonderful instrument. It didn’t take long for me to stumble across a gentleman by the name of Stephen Bennett, who as it turns out, had been playing one for quite a while. There were comments under his videos from numerous top level players, so I figured he must be quite the ‘go to’ in the HG world. Turns out, I was right (that happens every now and then – but not with enormous regularity).

So you can imagine what it felt like being in a room with a handful of other budding harp guitarists with the man in question, absorbing an expertly-led chord related session on a fresh morning in Connecticut. It was a great location for this year’s Gathering. I attended last year in California, which was a far, far (far) longer flight, so 7 hours rather than 12 was definitely welcome. Although after only watching 2 Harry Potter films rather than 4, I felt a little empty inside. Perhaps I’ll take a few of the books with me next time and read the first one whilst I watch the second film and so on. There’s always a solution.

I always love going to workshops for a number of reasons. I’ve given a number of them myself over the years and continually try to attend other peoples’ to see how they go about doing it. My main concern is making the content relevant for everyone, as everyone is always at a slightly different level, which is never easy to know before hand. Within 5 minutes, it become clear that Stephen was an expert at starting from a manageable level, then gradually jacking up the level of detail from there. Very much not ‘so, there are major chords, but LISTEN TO THE DOMINANT 7 SHARP 9b45th! ISN’T IT PRETTY?!’ 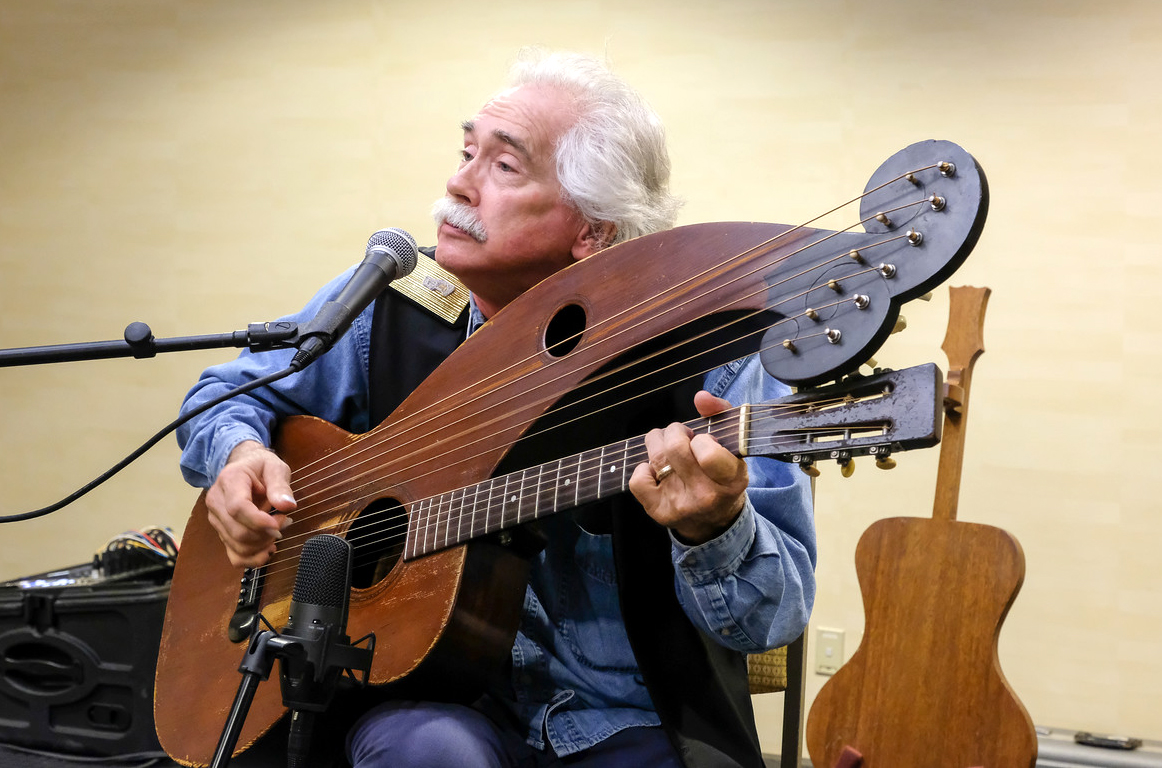 Holding a person’s attention is getting ever trickier in this day and age. However good you are at anything, people soon wander off into their own heads after a while if things are inclusive and interesting. Or check their Facebook. Thankfully, this was also a very strong aspect of Stephen’s session. Every 5 minutes or so, he’d ask someone in the group if they new a certain voicing, or if they had tried using a voicing in a certain progression, or challenging them to play a chord they might not know (when he threw some notier jazz-esque chords at me, it gave my brain a bit of a nudge as if to say, ‘remember these? Haven’t played these lately have you! LISTEN.’) But in all of the asking and demonstrating and chatting, there was no air of, ‘I know more chords than you because I’m me.’ Far from it. Whether it was working through the construction of basic major and minor chords (the handout sheets were very useful and laid out extremely logically) or working up to the, as Kim Person beautifully put it, 13th ‘Bow Tie’ chord, the explanation was concise, user friendly and put into a handy context.

As the session progressed, something became very clear. This was very much not a harp guitar exclusive workshop. Of course we all had our HGs with us at the time, thus SB encouraged the use of bass notes within the chords to add depth and flavour. But 6-string players would have gotten just as much from this. That’s what I’m coming to learn more and more about the

Gathering each year. People from all backgrounds, walks of life, levels of ability and players of even the simpler forms of stringed instruments all have something catered towards them. It would be only too easy to make the HGG a ‘how many strings have you got on YOUR Harp Guitar? 33? Is that ALL? *Spits on the floor* PEASANT! My mate Benoit has more than that just on his first set of super trebles…’ fest. Thankfully, it’s not 🙂

If anything else could have been added to this workshop, it would surely only be that Stephen could have clearly filled another hour or more just talking about the basics. But time is the enemy for us all, which Stephen anticipated, thus piling in a heck of a lot of info into the 90-minute period. Possibly the highlight for me was his description of chord build, from basic major to 13th.

Whenever I wear a jacket from now on, I’ll always think of Stephen. Of course, that’s ALL I’ll be wearing … 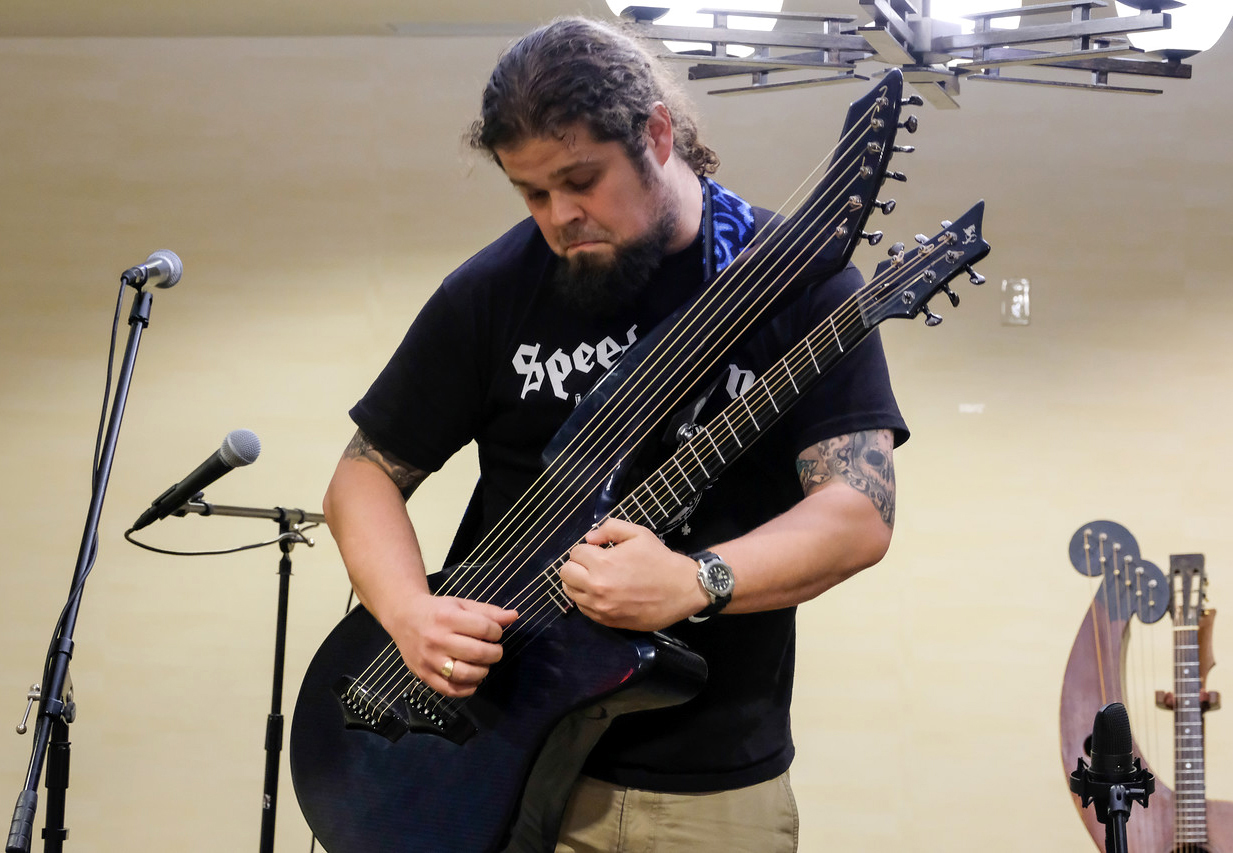 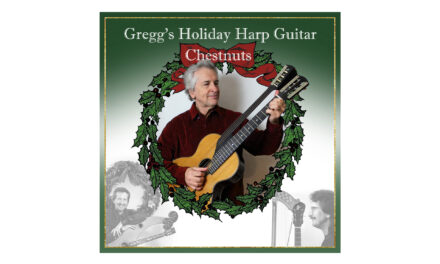 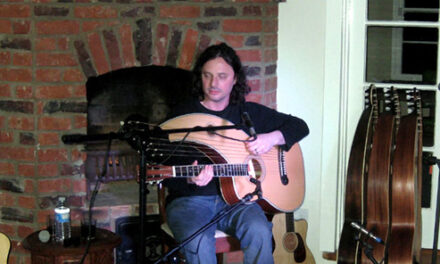 Holloways to the Right and Left of Me 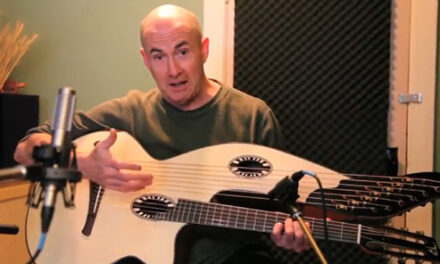