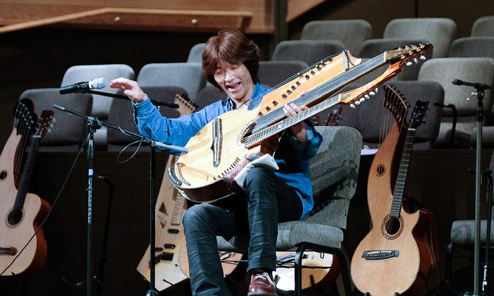 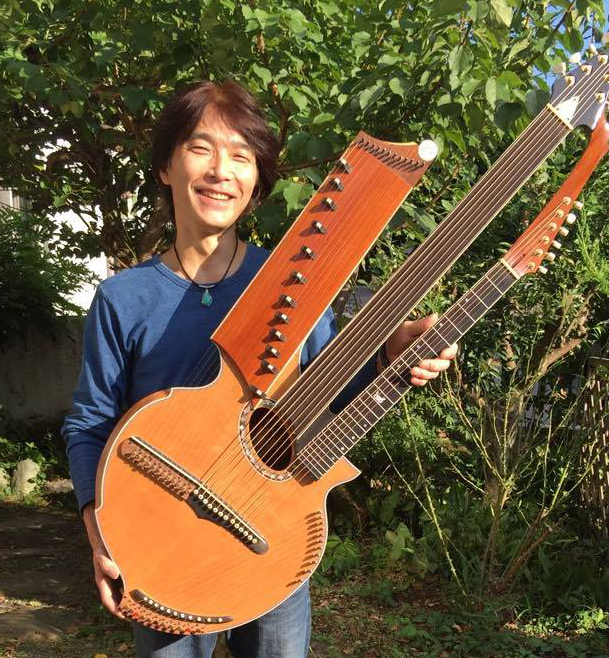 The worldwide harp guitar community and friends beyond the music world are mourning the loss of “Hiro-san” – our dear friend Hirokatsu Takai – who passed away December 18th, 2018. Hiro had suffered a ruptured brain aneurysm just after finishing a performance at his favorite club ten days prior, and never recovered. He was an all-too-young 55, at the height of his consistently amazing musical powers on the instrument he invented, the Koto Harp Guitar.

His music and performances were infused with, and inseparable from, his beautiful nature, and Hiro will be remembered most for his gentle soul and unrelentingly kind, generous and loving spirit. Every single person he met at the three Harp Guitar Gatherings he attended became his instant friend, and no performer – no human being – has ever made the impact that Hiro did at our event and through other channels in-between.

Hiro is survived by his beautiful family: wife Masami, daughter Mio and son Himuro. Please enquire to my wife Jaci if you’d like to send a card or a gift. 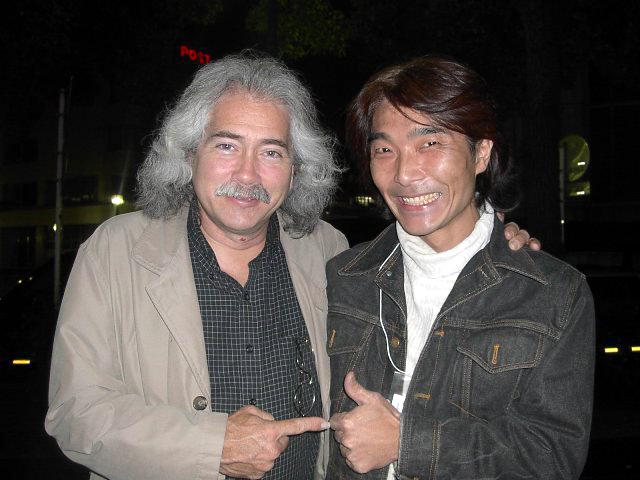 I first learned of Hiro through Stephen Bennett. They had met in Japan in 2004 at “National Fingerpicking Day” and the guitar contest during the Morris Guitars-sponsored festival. Stephen was a judge, Hiro won the competition. Stephen was surprised that “he’d altered his guitar so it had some koto strings. I asked the other judges if this was ok, as it wouldn’t have been allowed by Winfield contest rules, but in Yokohama, it was fine.” What a first impression! 2004: And so, later that year, when Stephen, John Doan and I were putting together the seminal harp guitar compilation Beyond Six Strings, one of the submissions was by this intriguing artist on his unusual instrument (a brand new form of “harp guitar”). Our consensus was to include Hiro’s piece, but poor translating skills on both sides made the logistics too difficult at the time. You can see and hear a YouTube version of it here: “The Kano River in the Storm” 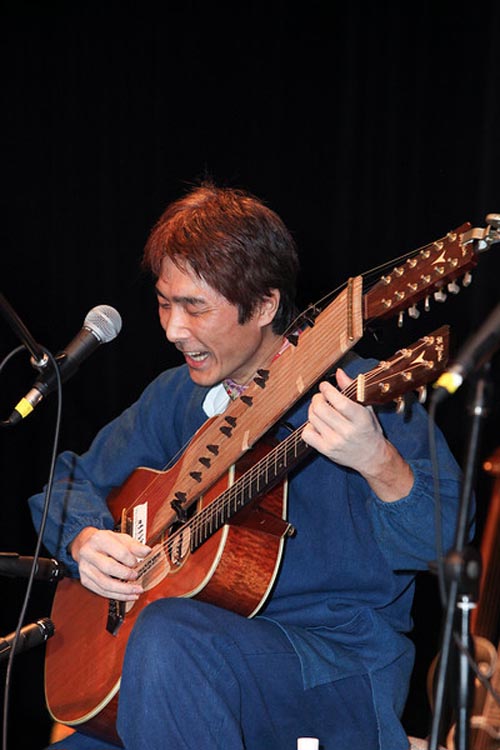 2009: Having kept in touch (and with five years to practice our communication), in 2009 we booked Hiro as our special international feature at HGG7, the 7th Harp Guitar Gathering (the first and last that we held on Halloween). 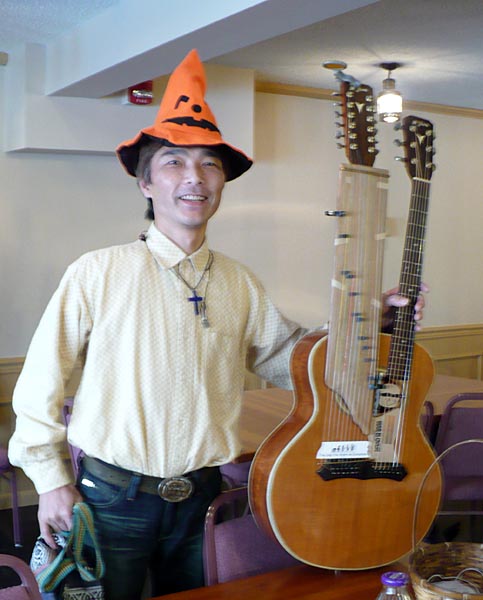 Hiro was beside himself with joy, as were we all, captivated by his music and taken in by his pure and loving heart. So many memories and adventures! 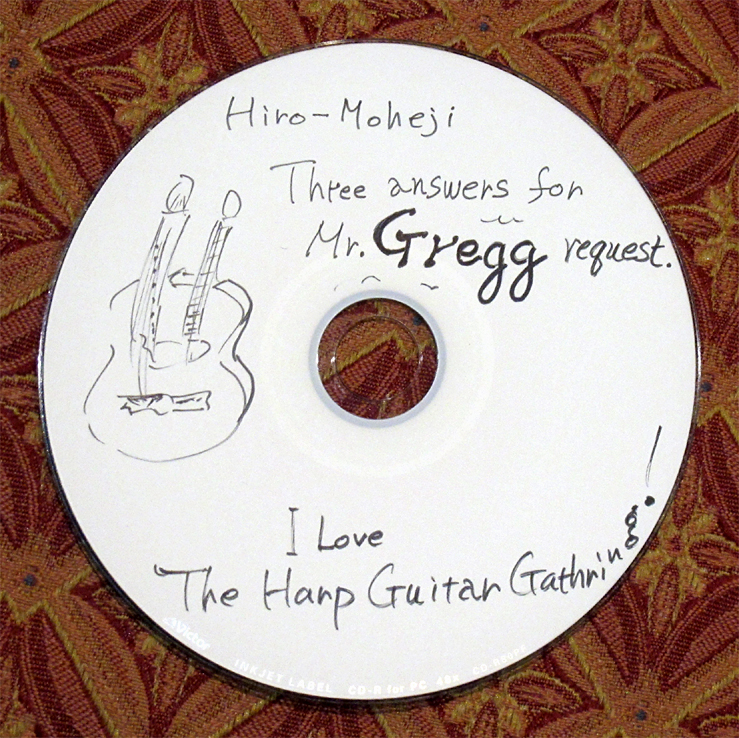 2011: Now producing CDs on my Harp Guitar Music label, I was  determined to create my own  meticulous method to collaborate with Hiro through his best friend Shinichi Yoshida. Throughout 2011, we undertook the inclusion of one of his pieces for the compilation Further Beyond Six Strings. HGM artists and affiliates know well my reputation of “tough love.” Hiro discovered this as well, as he went through several full iterations of his track, the final eventually occurring after he had rebuilt his original koto harp guitar to deal with its nagging intonation issues. (Pictured is just one iteration he sent – 3 new takes on a hand-illustrated CD.) For better or worse, he ultimately chose to forgo the original piece’s most haunting effect – koto harp guitar with bottleneck slide. Though I urged him to stick with the slide, Hiro made the call to rearrange it as a fretted piece. The results were of course still beautiful: his perseverance paid off and I was thrilled to see him join the “Harp Guitar Collective” (and so proud to earn my new appellation “my beautiful producer Gregg-san!”).

The piece was originally titled (per one of Hiro’s inimitable translations) “Sad eyes of separation who leave or send” – for me, a standout on the hand-crafted CD he sent Jaci and I after HGG7. Hiro and I subsequently shortened it and he embellished it further as it morphed into the demo versions. The final fretted version that appeared on Further Beyond Six Strings was then called “Prayer for You.” 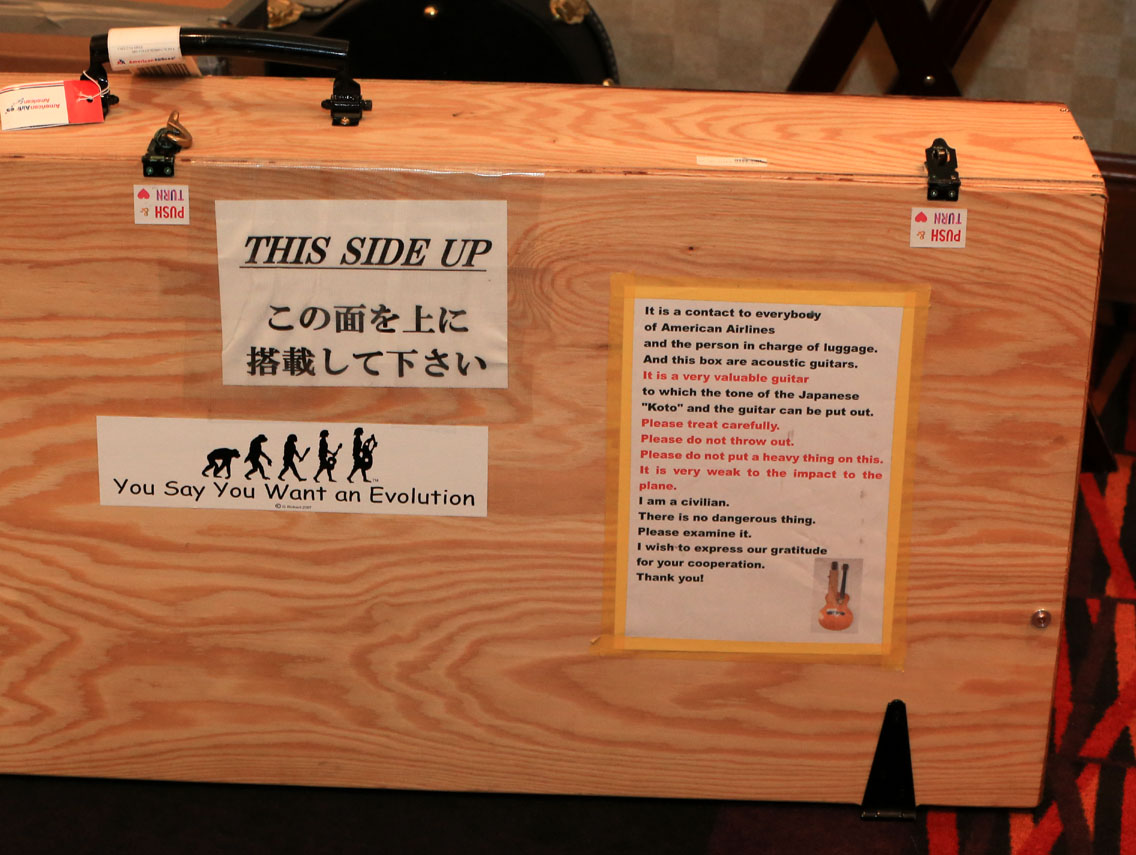 2012: While we chose to splurge a bit on new Featured Performers for the Gathering’s 10th anniversary (we were as surprised as anyone that we made it!), we knew we had to celebrate the occasion by including Hiro. Once again, he charmed new friends and fans and left unforgettable memories.

“Please listen.”
During opening dinner, Hiro reads the first of many carefully-prepared English announcements for the weekend. 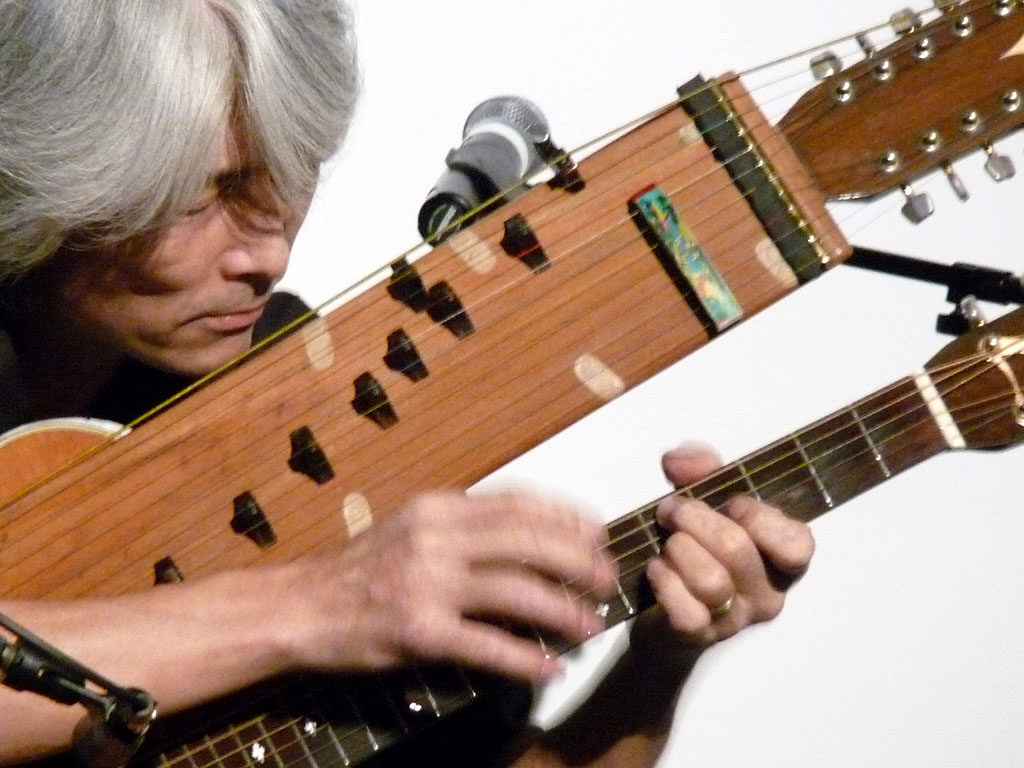 His improvised duets in front of a live audience with another late great – Tom Shinness – were particularly moving.

At HGG10, we surprised Stephen with a special CD release.

When I conceived of this 2012 Tribute to Stephen Bennett album, Hiro was of course at the top of my invite list.

His “Yokohama SB” is as joyful a piece as one could wish for..

2017 and HGG15: Another anniversary year, and my own first time hosting. I was not to be denied!

So for the third time, Hiro – under his new stage name TakainoMoheji – made a triumphant appearance. 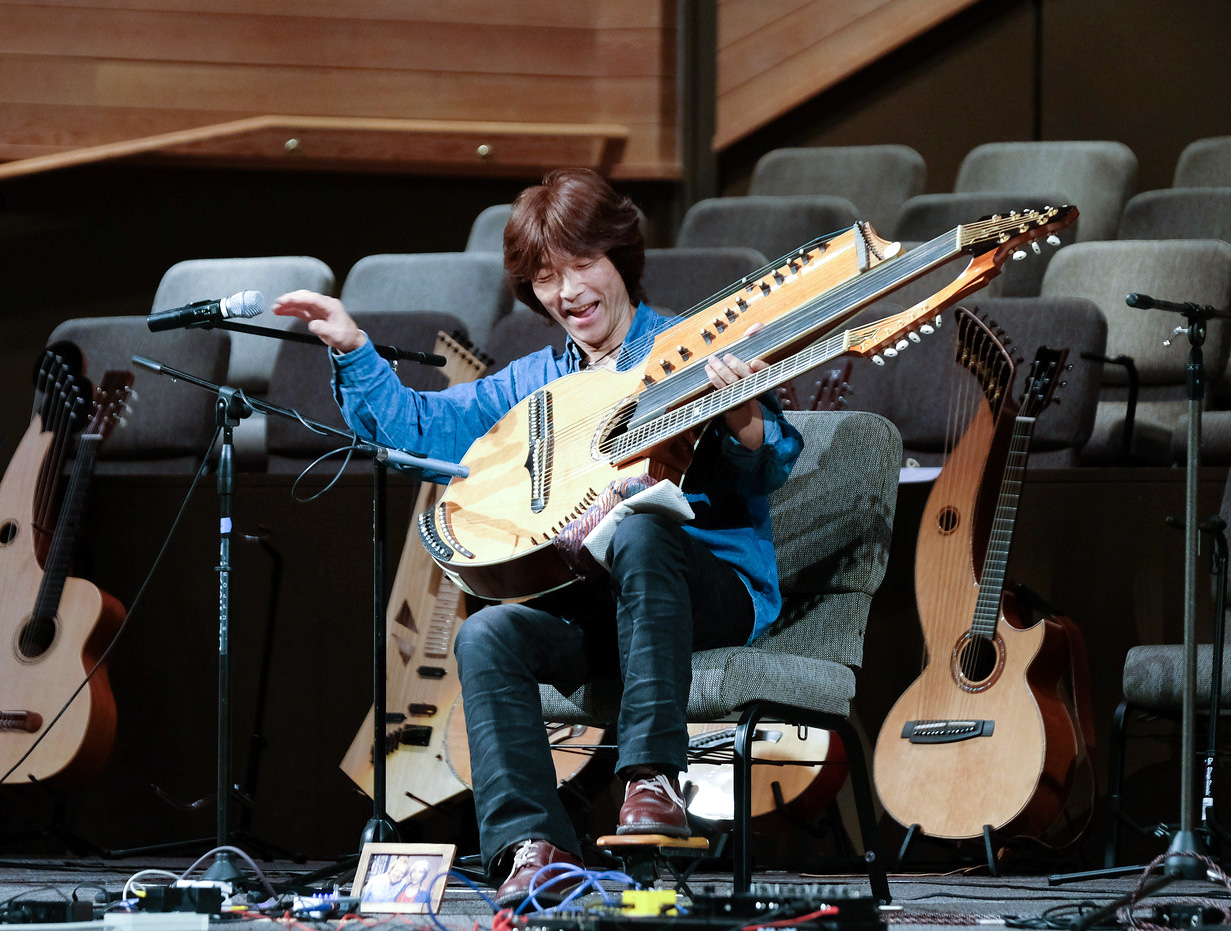 It was also the debut of King Ghidorah, the new custom koto harp guitar built by Benoit Meulle-Stef. And it did not disappoint, nor did Hiro, with new pieces and techniques more marvelous than ever before. 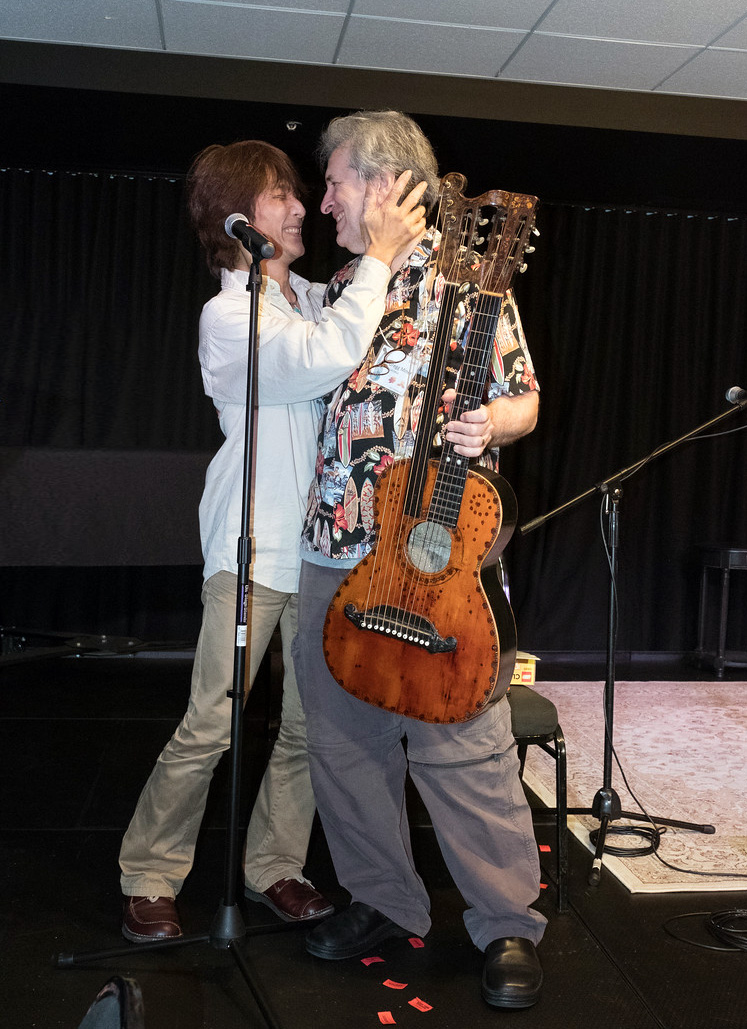 Two children. He always loved joining in the non-musical events. I don’t remember what was going on as we were preparing to raffle off “Hula Lula,” but we always had way too much fun.

Then of course, there was the impossible bounty of gifts that (as Stephen would say) Hiro somehow kept pulling out of his suitcase like Mary Poppins. Hand-selected and gorgeously-wrapped treasures for so many of us, even more meaningful now. 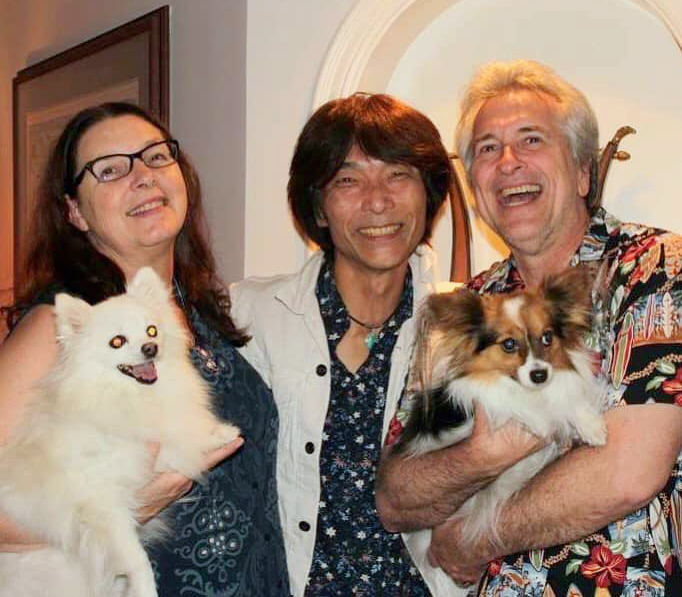 Besides the Gathering, Hiro was anxious to come to our home to finally meet our “children” and see the Miner Museum. We are so glad that he was able to visit.

Well, there is so much more I could write, and I haven’t really even said what I’m feeling – which is an unfillable void. I know just how many of you feel it too. Please feel free to include your own stories, memories, thoughts or photos in the Comments section below, as this will remain a permanent archive on Harpguitars.net. Hiro himself was a huge supporter of everything I – you – we – did…his oft-repeated exclamation was “I love the Harp Guitar Gathering!” He did, indeed. Because he loved the music, and he loved all of us.

2009 again: We were in Hiro’s room at the close of HGG7. Hiro had an early flight the next morning and we had to make our goodbyes. This, Hiro was simply unable to do, holding me in his arms sobbing. Finally, we taught him our American expression “until next time.” He remembered this always, and we would never in our lives say “goodbye” – only that. And so now, the whole world says to you, Hiro-san: 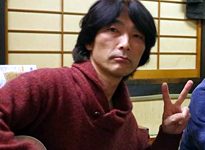 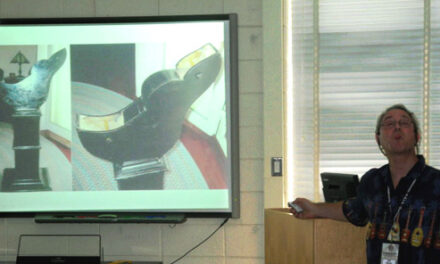 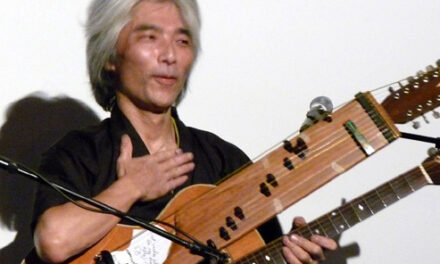 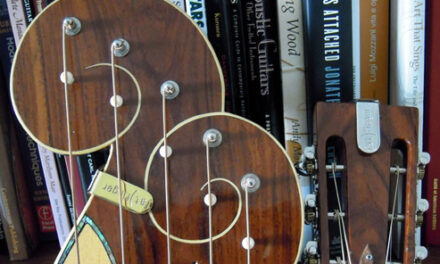