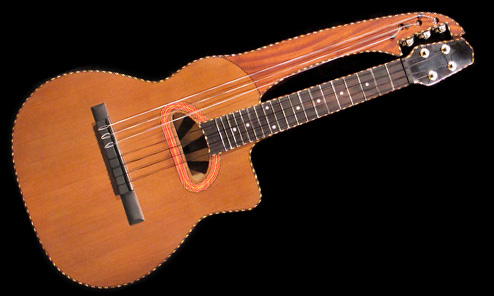 Wow, I just realized that this is actually my very first new harp guitar commission.  OK, not exactly a guitar… (I’m starting small).

The question for you, the reader, is: Well, what is it?!   Sorry, you have to guess (if you guess wrong, the links won’t work).   And no cheating!

OK, here’s the story.  I’ve only fairly recently warmed up to the idea of new instruments, being a “vintage snob” and a collector more than a player.  So at the end of HGG6 in Portland 2 years ago, Ben (Meulle-Stef) was telling me that attending luthier Michael Dunn (from Vancouver, Canada) was planning to retire.  Well, it turned out that (like most of us) Michael wasn’t retiring cold turkey, or soon – he was just deciding to become more selective about his projects.   But at the time, I panicked!

See, Michael has long been one of my favorite luthiers.  First, with all his Selmer-style Gypsy jazz guitars, each one different than the last, with surprising wood selection every step of the way (and they’re great guitars).  And of course, I’ve gotten a huge kick out of all his Knutsen-inspired harp-ukes in all sizes and colors.   So, I figure, better get on his list before it’s too late.

But I decided to give him a challenge.

I’m thinking, I don’t need a Gypsy guitar, as much as I’d love one.  And a Knutsen-y thing would just look odd next to all the originals.  So what?   Hmmm…could I possibly combine the two…?

Can you guess or honestly envision it?!

I asked Michael to imagine “What if Maccaferri had built a uke version of his harp guitar?”
And boy, did he get it right!

The trick was to scale it down but create a realistic, usable instrument.  We decided on tenor scale (17″) , though the proportions would create a baritone-size body.  Here it is compared to a standard Gitane Selmer copy:

Easy enough?  (not really)  But the real puzzle was getting the 3 sub-bass tuners in there to roughly emulate what Maccaferri did on the harp guitar (he did his own machining).

Michael says “The 3 heads are Waverly tuners that have their pointed ends sawed off and mounting holes redrilled to squeeze them into the small space.  The complexity of that total head shape  kept  me awake nights…”

Woods are a nice red padauk for the back and sides, red cedar for the top, and mahogany for the front of the arm.

The bridge is stained sapele, while the reflector is ebony and holly.

Ah, the reflector…this was something I insisted on, one of Michael’s trademarks on his Gypsy guitars, a modification of the baffle/sound reflector set-up seen on some Selmer guitars.  The tone is great coming off the soundboard, but there are also interesting and dynamic “sound eddies” coming out of that unique soundhole.

The rosewood and maple rope binding (everywhere – even that little space behind the arm tip!) is of course a nod to Knutsen.

All in all, Michael feels instrument #589 “is a good meld of Maccaferri, Knutsen and Dunn.”  I would agree!

P.S. Up next for Michael?

“I am working on a 25-string Carlsonesque instrument right now, and a 14-string Gandharvi (Indian slide guitar) which in essence is a 12-string Weissenborn with 2 chikari strings.   I have just taken the order for instrument #600.  It will be a “Cubist” guitar….I intend to outdo myself this time !!!!”

…and I thought he was retiring…

Mario Maccaferri and His Harp Guitars 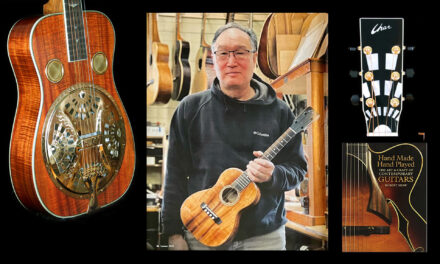 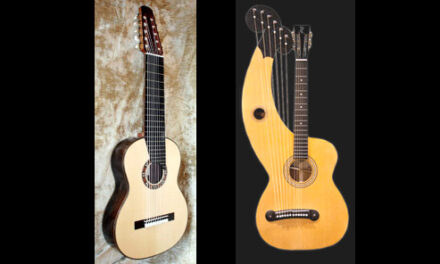 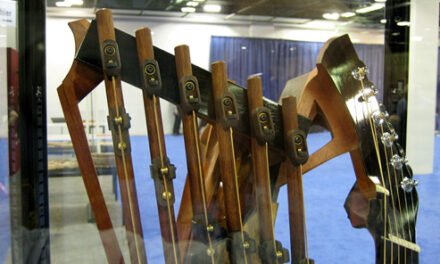 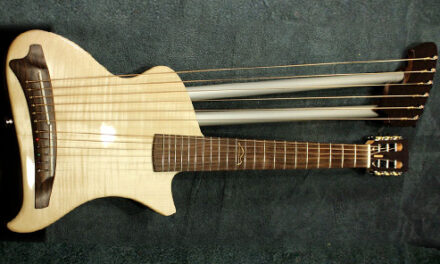