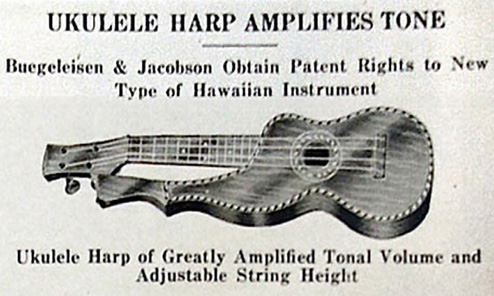 One of the more exciting Knutsen finds of recent years (which I just now finally added to the Knutsen Archives) came from ukulele collector/historian Tom Walsh.  He kindly sent me a couple scans of news releases from The Music Trade Review, dating from 1916 and 1917.   Soon after, I was alerted by my peers that this important weekly trade magazine was now archived online (courtesy of The International Arcade Museum® and NAMM).  Though their PDF search engine is very hit and miss, I found an additional two notices (and wonder if there could be more).  Unfortunately, one of Walsh’s submissions was from an undated December issue, and after spending an hour or two manually hunting for it, I came up empty (it’s a slow, tedious search page by page; perhaps someone else might have better luck?).  So I can’t yet put that one in the proper timeline.

Regardless, the four notices all concern one topic, and one that took me and my fellow Knutsen researchers by complete surprise!

Namely, that Knutsen was supplying his harp ukuleles wholesale directly to the large New York distributor Buegeleisen & Jacobson (B & J).  Interesting in itself, but the real kicker was the mention of a new patent!

This was something we’ve been pondering for years.  Several Knutsen steel guitars and harp ukes are known that have a “Patent Applied For, C. Knutsen” label.  There are multiple variations of these labels, in fact – along with a c.1913 label with “Patent Aplod” handwritten in (this latter of course occurring after the expiration of Knutsen’s last verified patent of 1898).

But according to Tom Noe’s thorough Patent Office search, no additional Knutsen patent was ever granted.  We have long wondered whether the patent application feature on these labeled steel guitars was for the square, hollow neck or the “convertible bracket” feature (a behind-the-neck brace affixed by a wingnut) seen on the earlier steels.  No evidence exists on this mystery (and it is not possible to search for patent applications – only granted patents).

Adding to the mystery was the later discovery of P.A.F. (Patent Applied For) labels in first one harp ukulele, then another, and now, the majority of them (11, at latest count)!  What was Knutsen playing at?  Was this another new patent application, perhaps for the design of his hollow arm harp uke, as Tom and I theorized?  Again, no records exist.

And now we have our “smoking gun.”

These B & J news releases specifically state that the patent application was for an adjustable neck, allowing the player to raise or lower the action.  So why hadn’t we previously deduced this?  Well, because there was no compelling reason for any of us to have seen this feature as noteworthy.

The “invention” was really nothing more than a slight alteration to a feature present on all Knutsen’s “harp” instruments from the beginning – the L-bracket joining the headstock to the arm, and the butt joint on nearly all these instruments.  Originally meant for stability, the bracket could always be adjusted slightly to act as a crude “truss rod.”  The butt joint allowed more flexibility to the neck.

Before long, Knutsen would simply add a longer slot in the L-bracket, and attach it with a wingnut (or in the case of the harp ukes, still a slot-head screw).  The neck-to-body butt joint would become shallower, and often include an L-bracket “pivot point” as a stronger “hinge.”  The true “convertible” harp steel guitars would even have that area of the neck scooped out so that there was very little neck-to-body contact beyond the 2 little L-bracket “hinges.”  Some ukes have a loose neck – only the single tiny bracket is holding it on – and it may be that Knutsen deliberately did not glue this joint, in order to allow better adjustability (I wouldn’t put it past him).  But I’ll tell you it sure is aggravating when the neck pivots while you’re playing!  The uke’s adjustment is not meant to be “convertible” (as in Spanish style-to-Hawaiian style on the guitars) but provided for a one-time “action adjustment,” so a permanent screw is used.  Strangely (which is to say, commonly, for Knutsen), some of the harp ukes don’t have the sideways-mounted L-bracket, but a straighter, stabilizing bracket on the back.  My guess is that these were the result of discovering that the neck and arm were not aligned properly when completed (D’oh!).  I suppose Knutsen could’ve argued that the player could just bend the metal brace with pliers and achieve pretty much the same result.  But however he managed to bracket the neck and arm together, in this regard, it’s really little different from any of Knutsen’s original harp guitars or harp mandolins.

So why try to patent it now?

First, note that I said “try.”  Though the first two B & J announcements imply that the patent already exists, we’re sure it was never granted.  And in fact, by the final ad (May 12, 1917), it is listed as “Patent applied for.”  Nice that they finally corrected it.

Well, Tom figured it out (as only a retired patent lawyer could have!).  The patent feature was indeed an “adjustable neck” feature (which, until now, we did not know applied to the harp ukulele at all – as I said, it would have been the last thing we imagined).  But he noted that the patent didn’t have to necessarily incorporate the precise mechanism behind such a feature.

Not only that, but Tom explained how one could exploit a loophole and keep a “patent applied for” going almost indefinitely.  Ergo – Tom now hypothesizes, and I would concur, that Knutsen likely applied for a patent early on for the original “adjustable neck” feature of his first Weissenborn-shaped steel guitars – the aim of which was to raise the action for Hawaiian playing and lower it for simple fretted chord playing.   If he was looking to the future, he would’ve left the wording open to include various or as-yet-unknown methods of neck adjustment.  Indeed, he kept at it – he even abandoned his trademark harp guitars completely, instead offering them only within the context of his new “convertible” harp steel guitars (the “Upper Treble Point,” or UTP models – which are much less practical as a fretted harp guitar than as a lap steel guitar).   Curiously, the UTP instruments have never been found with a “Patent applied for” label – only the New Hawaiian Family label (thus, when one mystery is solved, it presents another to take its place!).

We now believe that the harp ukuleles represented one last gasp to milk this patent application (re-submitted as many times as Knusten could incorporate another small change), with a simple adjustable system that ironically hearkened back to Knutsen’s older instruments.  (NOTE: the Knutsen Archives version of this article includes all of Tom Noe’s detailed comments on the patent game, and how Knutsen could have played it).

Continuing now with the trade announcements:

I believe this is the first B & J appearance, though, as I said, I haven’t yet been able to date it.  The submitter Tom Walsh had it listed as December 1916.

Note the term: The owner, himself – Samuel Buegeleisen – announces it as the “Ukulele Harp.”  Could it be that he got Knutsen’s term backward, and was then corrected for the next appearance?  Seems plausible, and yet they switched it back (backward) again later!

The notice states that his firm “had secured the patent rights and privilege of exclusive production of the new” instrument.  This news floored me for three reasons.  First was the claim that, at the end of 1916, Knutsen had secured a new patent…?! Secondly, secured or not, it tells us what the patent was for – not the design of the harp ukulele, but the adjustable neck feature.  And finally, there’s the implication that B & J themselves are going to produce it.  I’m certain that they really were only signing on as “exclusive” distributors, as no harp ukuleles have ever been found with a B & J label, only “Patent Applied For, C. Knutsen.”  So they weren’t hiding his name, nor re-labeling.  Which is doubly strange when one considers a known Knusten steel guitar with a B & J distributor label (in retrospect, probably not a coincidence)!  Presumably then, the “exclusive” agreement also included assigning any future patent rights to B & J (a bonus that never panned out).

Selling points of the new instrument included the boast that “it meets a tendency of many ukulele players who prefer a variable height of strings.  (The instrument) fully meets this variance of taste by providing an adjustable string level.”

And of course, the expected claim that the “graceful arching of the neck” (by which they mean, the arm, not the neck) increased the resonance and tone.

Interestingly, they describe four “handsome styles” – various levels of rope binding on three koa models, and plain mahogany.  As the majority of Knutsen harp ukes actually conform to these specs (with the inclusion of back binding on the second being a likely error), I imagine that Buegeleisen insisted that Knutsen provide some consistency, though of course, the arms and headstock/tuner details would remain as random as ever.

This dated announcement now says that they have “just placed on the market” a “New Style 4 Harp Ukulele.”  (Lest collectors and dealers be misled, note that Knutsen never put style numbers on his instruments, nor have such been seen in his own ads.  So this would be a purely B & J marketing connotation, and we don’t know which model they were actually referring to…the image is actually of a mid-level instrument)

They again include mention of “a patent device whereby the neck can be arranged so that the strings may be lowered or raised to suit the player” – and the expected hyperbole, “three times the tone volume.”

Three weeks later, B & J is claiming that the new harp ukulele is a huge success. Could there really still be hundreds of undiscovered Knutsen harp-ukes out there?

Four months later – whether successful or not (and I suspect not since so few specimens are known) – B & J feature the instrument in a full-page ad with their other ukuleles.  Strangely, they’re back to calling it the “Ukulele Harp”…?!   They’re also calling it “without question, the finest tone Ukulele on the market.”  Chris must have been proud!  I’m not sure why the woodcut is labeled “404-406” while the list gives 403 to 405 – probably a simple error.  Either way, they seem to have done away with the mahogany model.

Full-page ad that included the above Knutsen entry

So there you have it, Knutsen Knerds (add a hard “K” to each)…another convoluted Knutsen riddle that is now slightly less of a mess than before (except that now there is much re-evaluating and re-dating to ponder)!

I took some extra time during this exercise to properly update the Knutsen Archives while I was at it.  Here at page end, you’ll find all the pertinent comments from Tom Noe that address patent law and how it might have applied to Knutsen. 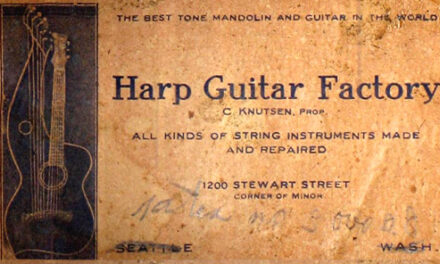 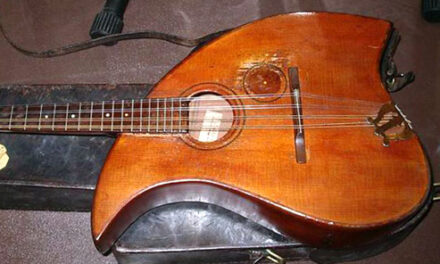 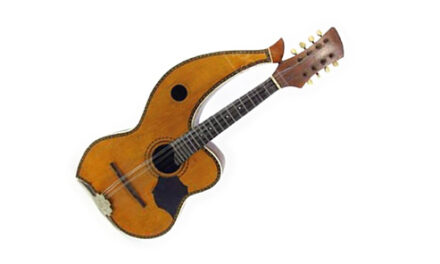