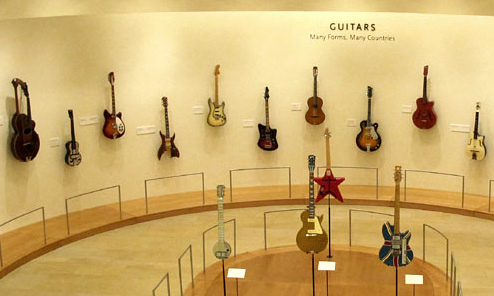 And now back to our regularly scheduled program. 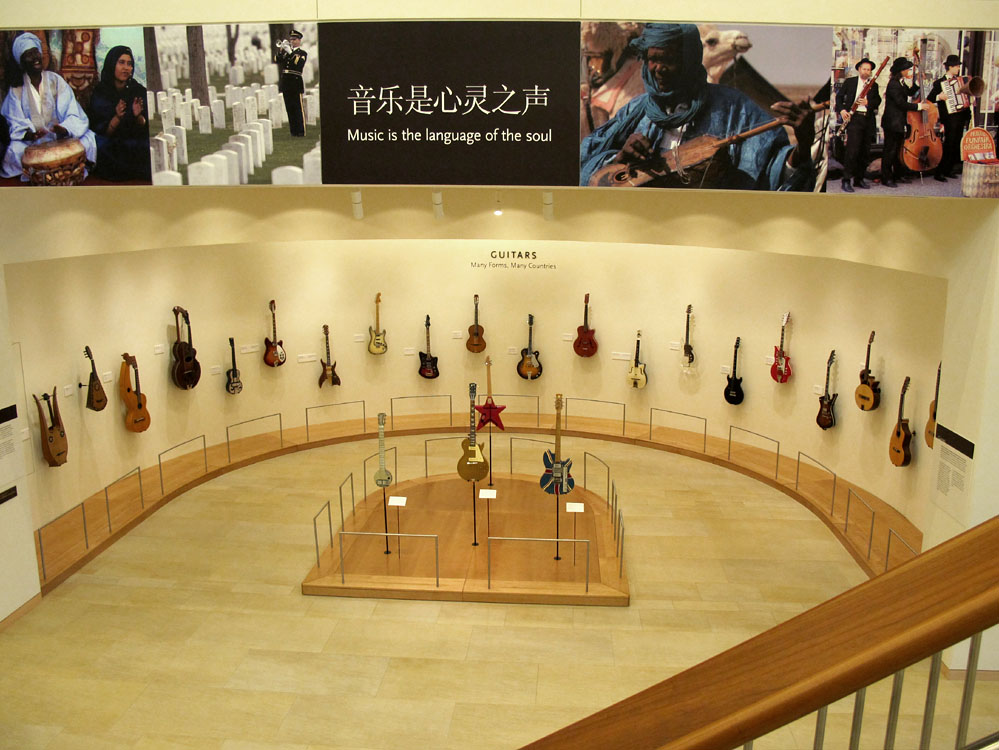 I spent the afternoon of my first day at the Phoenix Musical Instrument Museum looking for any harp guitars or similar instruments.  From my simple description of the museum’s charter in the first MIM blog, you can probably understand that MIM does not necessarily need a full and fabulous guitar collection.  Nor do they have one.  Yet I bet they’ll add a lot more things over the years, as they are a Living Traditions museum, and what is more common and popular than the guitar?!

For now, there are plenty enough for the general public to see a few cool things.  There are “star guitars” in one exhibit (Clapton, Santana, Dick Dale and others), and plenty of “folk guitars” throughout the various exhibits – Latin America, obviously (a whole wing) and much more.

Pictured above is a central guitar gallery at the entrance (view from the escalator/stairs).  It is simply meant to show how the guitar can take so many forms.  It was set up by previous curator Matthew Hill, one of the very few guitar scholars in the entire museum world.  He admits that he didn’t have a whole lot to work with (not to mention time).  I applaud his attempt – for example, right behind the gold Les Paul is a brand new pink electric Daisy Rock Guitar.  I love the (intended) controversy – it does make you think.  In a museum for everyone, with a zillion school children destined to tour its depths, what better than a real “living traditions” instrument demonstrating that someone is finally making rock guitar appealing and affordable for teenage girls? Ingenious. 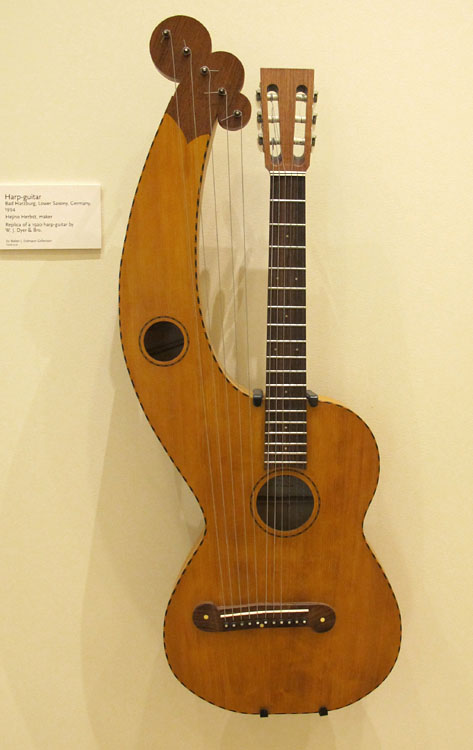 Now, I did have to chuckle at the 1994 “Dyer replica.”  I saw this a few years ago – some crazy knockoff by an unknown German maker.  Matthew was visibly embarrassed, agreeing with me that it was perhaps better suited to eBay than the MIM (they’d have been better off with a Holloway).  Well, until they get a real one, it’ll have to pass as “living tradition” (and be honest – how many of you were building Dyer copies in 1994?).  Perhaps the cartoon cloud headstock will even catch on. 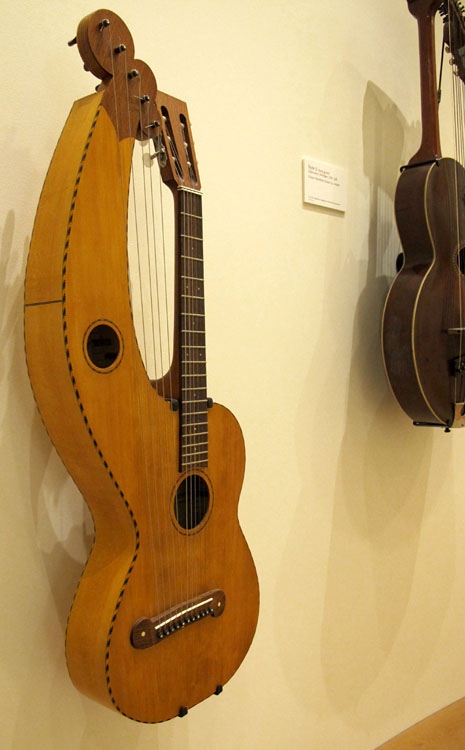 The Gibson next to it is a decent, garden-variety Style U, part of the now-defunct, wonderful Fiske Museum of Claremont, CA that was purchased by the MIM. 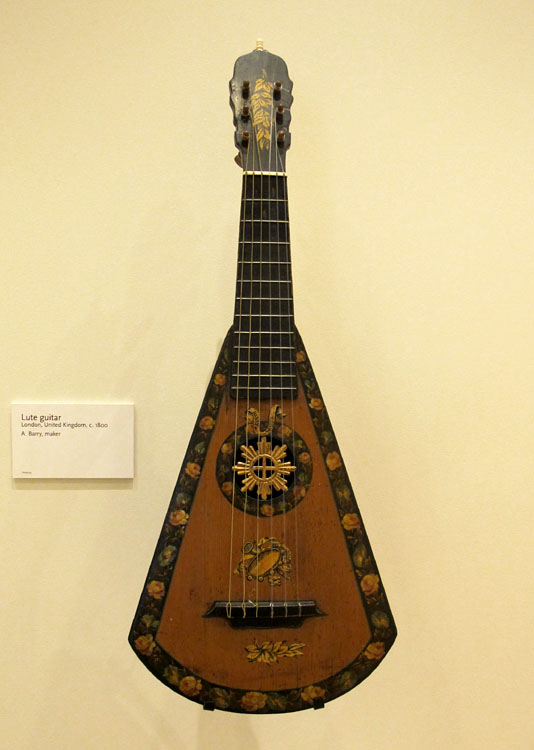 On the other side is this gorgeous “harp-guitar” by Barry.  I of course argued that this confuses the issue for the uninitiated, as it belongs with the open-C-tuned Edward Light harp-lute inventions rather than guitars.  Perhaps used because this one only has 6 strings instead of the more typical 7 or 8?  To confuse things further, it is also labeled a “lute guitar” (Matthew doesn’t remember where he found this specific name – I’ll be tracking it down, as I suspect it’s an error or misinterpretation). 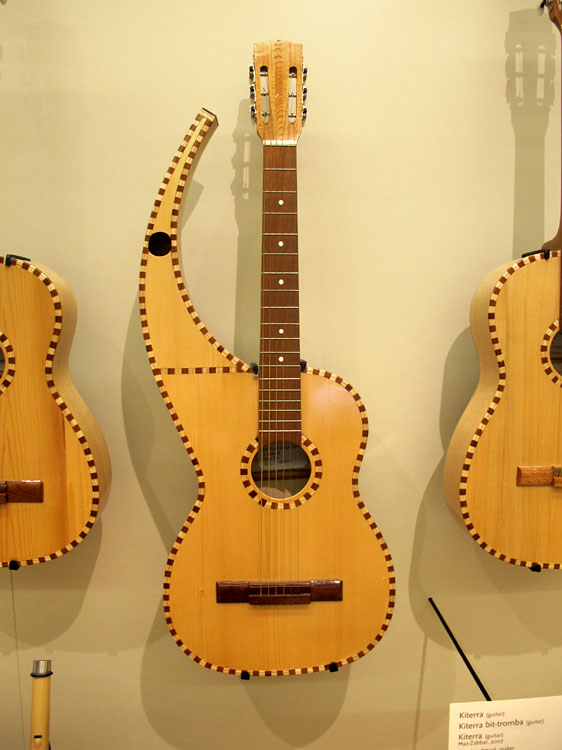 Closer to a harp guitar is this curious hollow-arm Kiterra bit-tromba by maker Crispino Attard, purchased to represent modern instruments being made on the island of Malta.  Nothing super-sophisticated, but in true “living traditions” fashion, one can see and hear Attard himself playing it in the video. 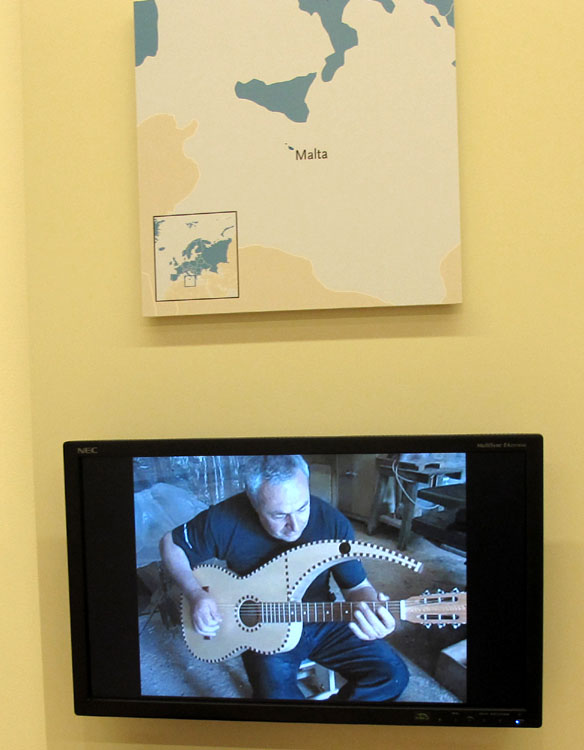 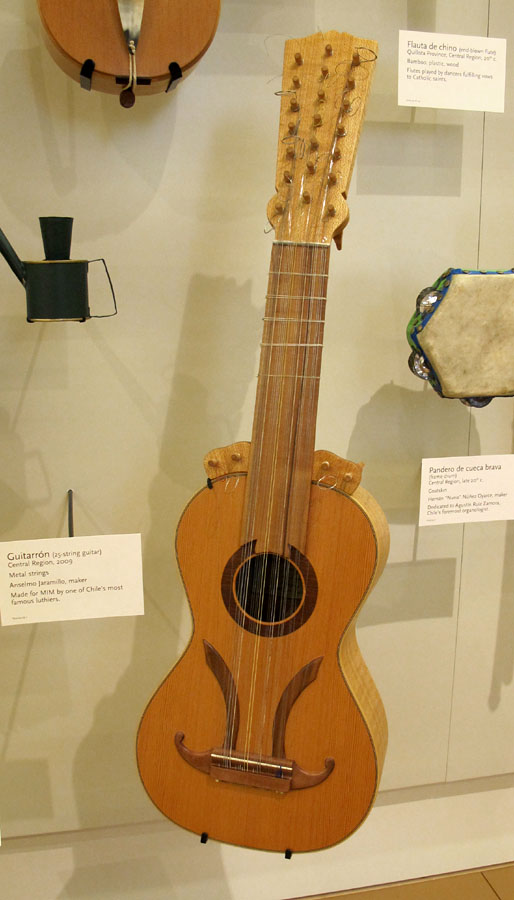 More interesting was this 25-string Guitarrón, made in 2009 by Anselmo Jaramillo, “one of Chile’s most famous luthiers.”  I was not familiar with this variant, which, with its two little harp strings on both sides of the neck, reminded me of the Portuguese viola beiroa, another historical folk instrument being built again. 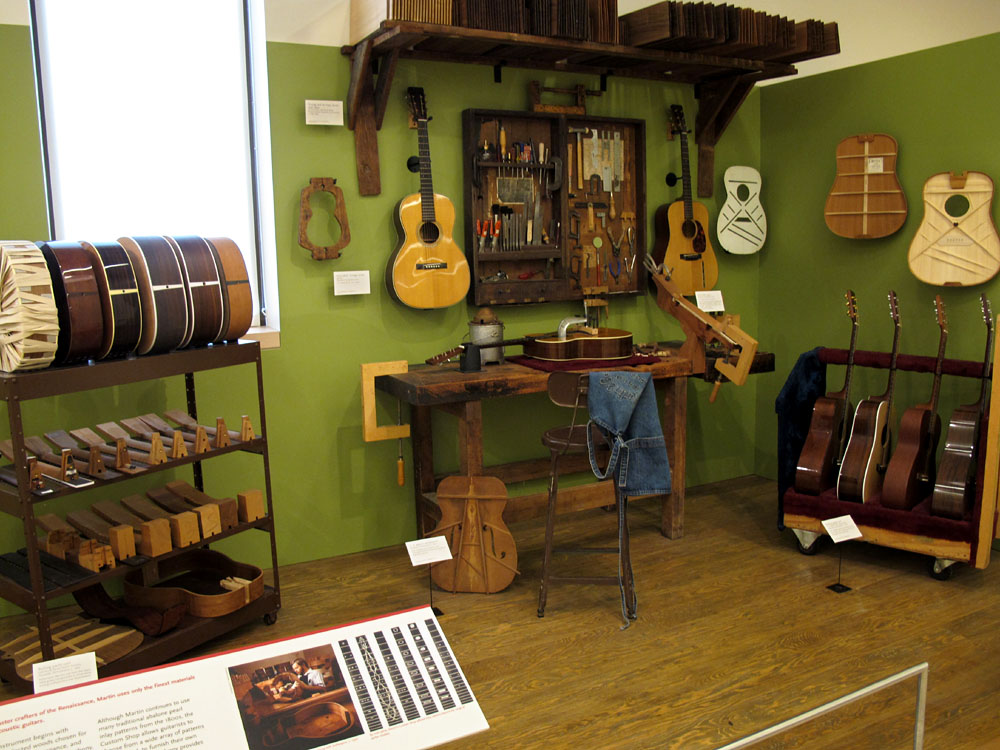 Above is a “recreation” of a Martin Guitar workbench and instruments in the USA hall (Martin is a museum sponsor). 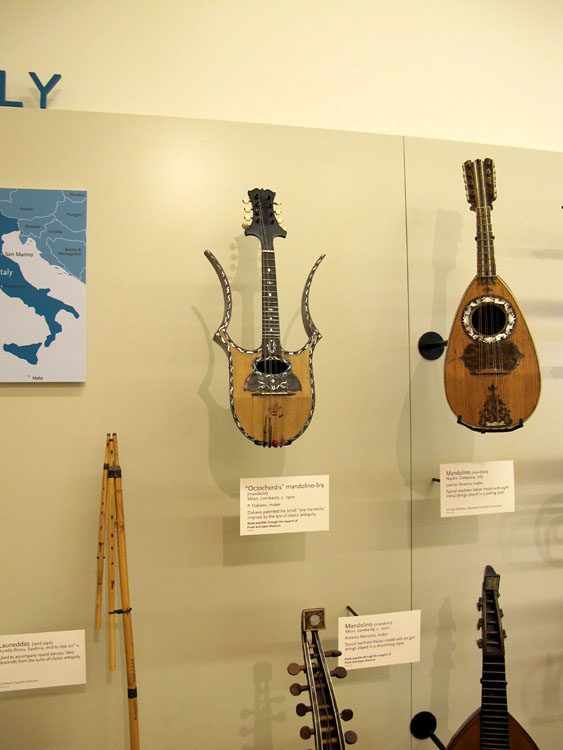 In the Italy exhibit, I was thrilled to see the “Octochordia mandolino lyra” (a piccolo scale lyre mandolin) in the flesh.  Had I known how stinkin’ cute this was in person, I would have certainly tried to buy it (from Canada’s Music Treasures) when I had the chance! 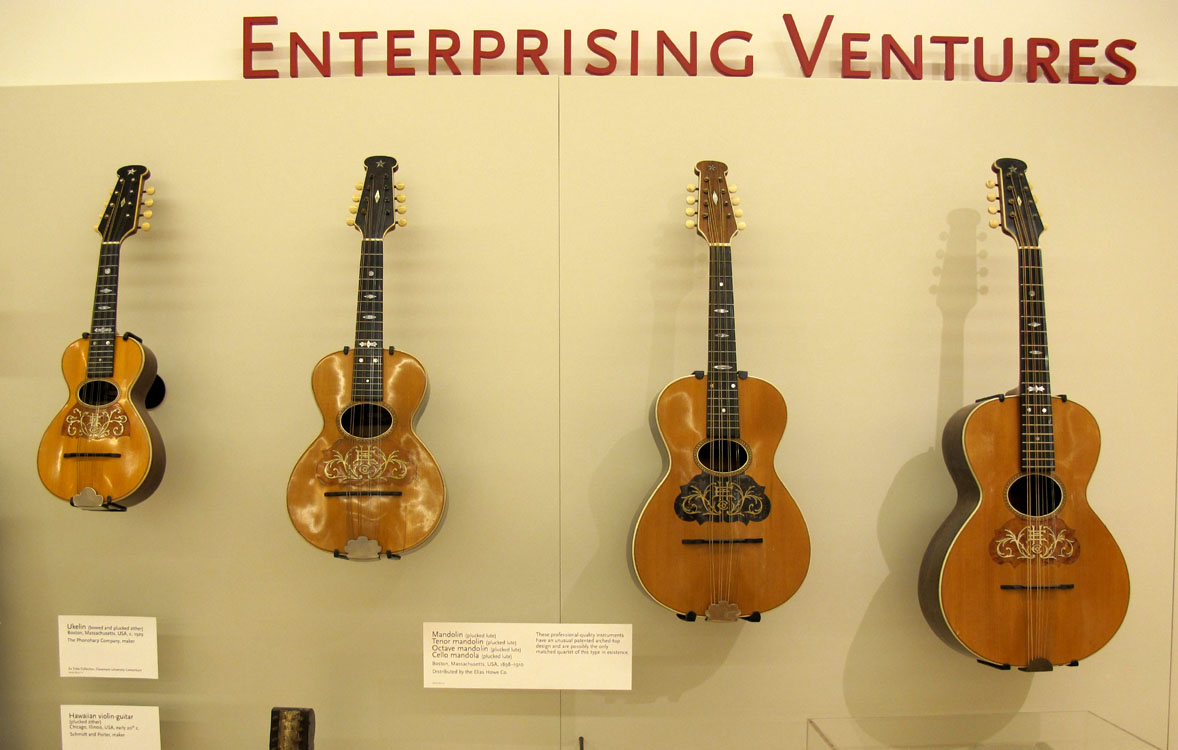 Another surprise (or maybe it wasn’t) was seeing pal Rick Turner’s full set of Howe Orme “mandolinettos,” which the MIM purchased. 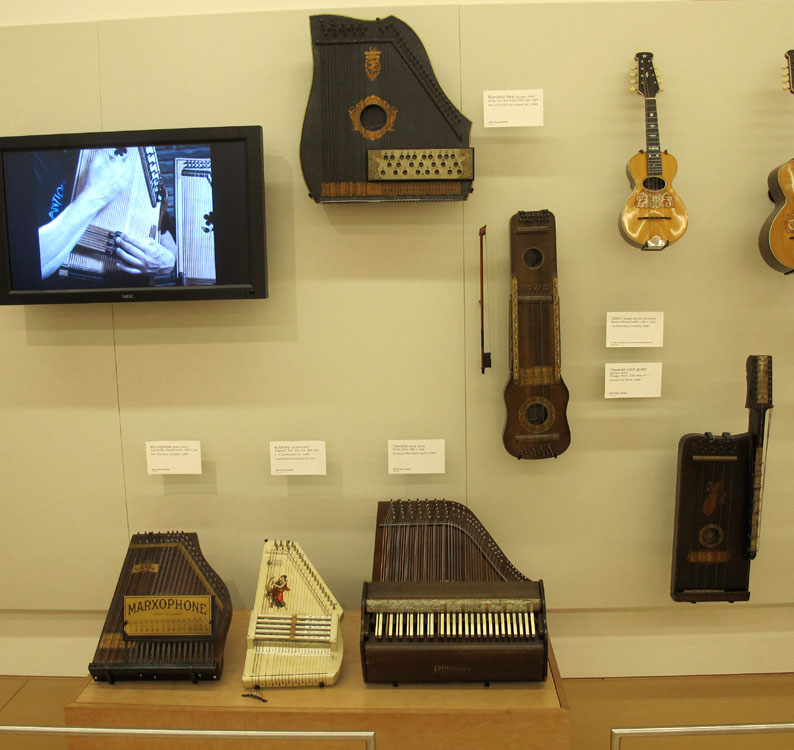 Of course, I knew my old fretless zither pal, Garry Harrison, had donated his entire collection to the MIM – so was glad to see a bit of it on display. 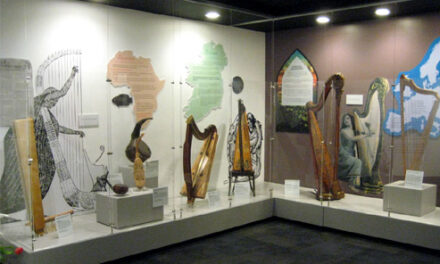 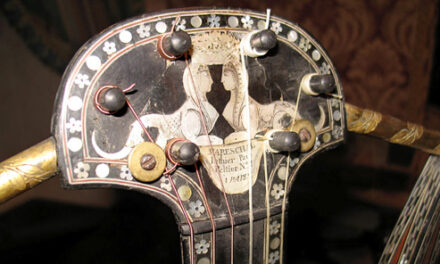 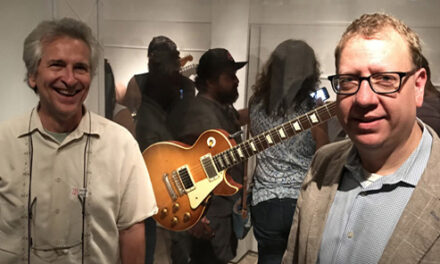 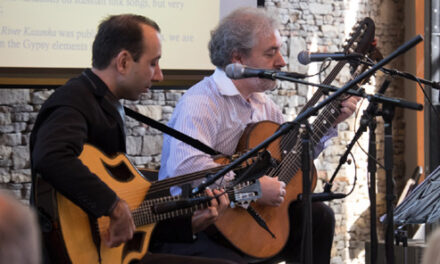