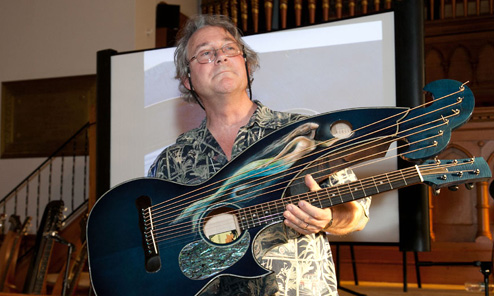 For the 9th annual Harp Guitar Gathering, we invited Southern California builder Kathy Wingert to host.  Reluctant to take on her first harp guitar project (at the insistence of client Frank Doucette), Kathy has since become one of our more prolific harp guitar makers (8 and counting).  So much so that she even has to occasionally answer her fans, “Yes, I still build 6-strings!”

Kathy donated her own presentation time in order to give more time to “whoever traveled the farthest or who proposed the most interesting topic.”

Obviously, with those “rules,” it was inevitable that first up was the mad genius Alan Carruth, who spoke for 30+ minutes on “psychoacoustics” – and (I think) why the laws of physics tell us that most harp guitars can’t work, but how they, in fact, do.  Or something like that (our brains and/or ears are fooling us).  Alan didn’t have a new harp guitar this year, so we were glad that he still made the trip and gave generously of his expertise (he could have gone 3 hours, he said, and I don’t doubt it).

Traveling the farthest was, of course, Vlad Kuzemsky from Trembita Guitars, in Lviv, Ukraine, who brought the two latest builds commissioned by Las Vegas’ (Las Vegan?) Jay Buckey (below, right).  They talked about how the project came about and hopes for future production.

As you know, Ukraine HG #1 (with blonde finish) was donated to the Foundation, and we raffled it off.  The winner, drawn during our Sunday night dinner was John McCormick, who by complete coincidence was one of Jay’s students in Vegas (!!! What are the odds?  Actually 1 in 165, the final amount of tickets entered).  Unfortunately, John will have to now look for a new (harp-) guitar teacher as Jay just relocated to Ukraine, himself.

Here Vlad shows a (somewhat daring) sunburst Dyer variant.  I preferred their all-black lacquered version, which I’ll be listing on Harp Guitar Music shortly.  We’re thrilled that Vlad was able to make the trip, and hope that the harp guitar becomes established as a “new folk instrument” in Ukraine, as they envision.

Other presenters – all of which have graced the panel in the past – included:

Rich Mermer, with his eye-catching new creation, “La Mer”; maple b&s with blue stain, and mermaid painted by a local artist friend (with subtle glitter paint…and yes, the tasteful, delicately glittered “naughty bits” were a highlight of the Gathering)

After the slide show presentations, we opted to try our first controlled instrument demonstration: Stephen played the same 60-second piece on each instrument (on mic) so the audience could hear the differences.  Additional instruments by attending luthiers included Dennis Mitchell and Dave Evans.  It was pretty interesting and enlightening. 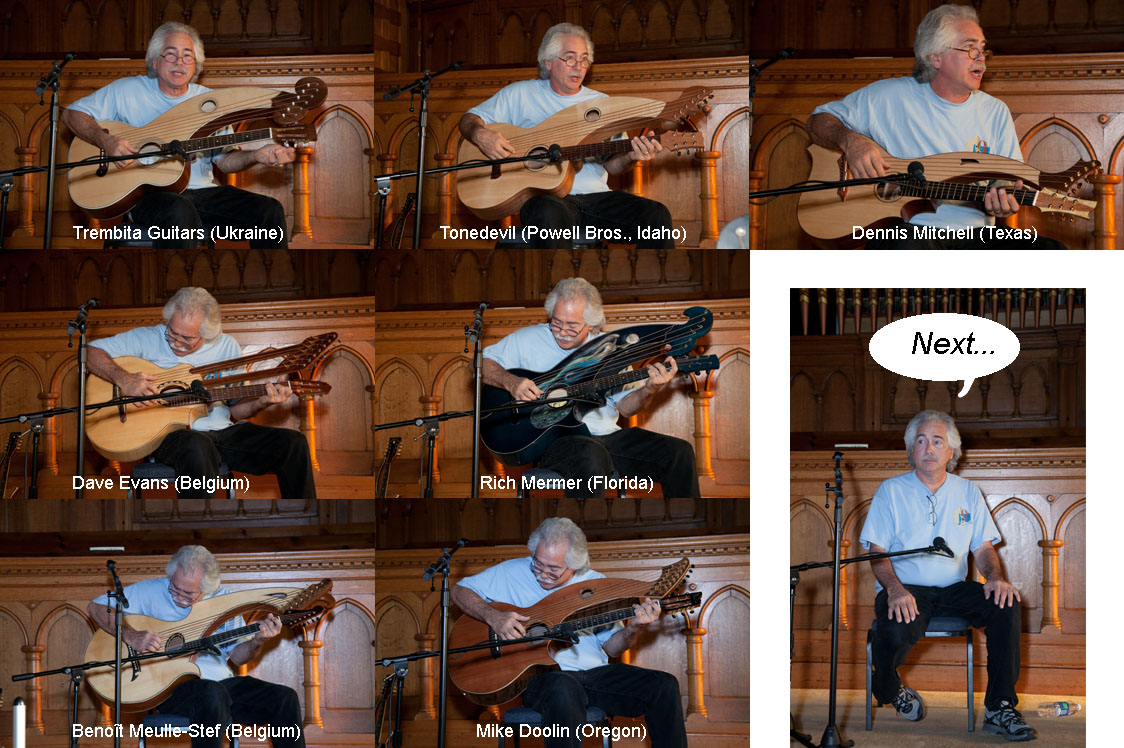 Look at Dave Evans’ “proud papa” expression as SB played his (Evans’) own instrument.  Every builder looked pretty much like this during their “60 seconds of SB fame.”

Thanks, Kathy and all the builders for what you do and for making the pilgrimage to the Gathering to share it with us! 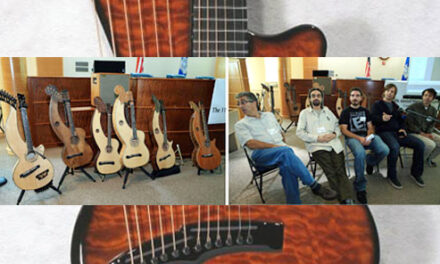 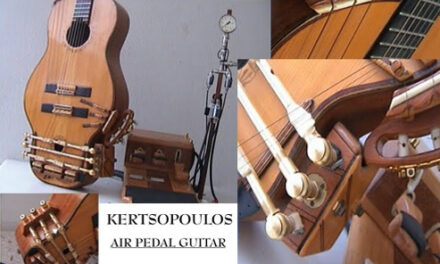 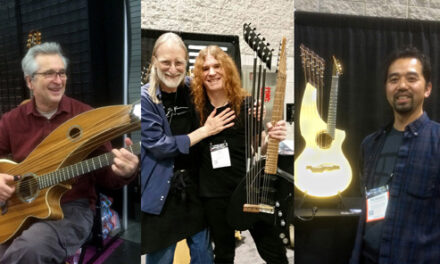 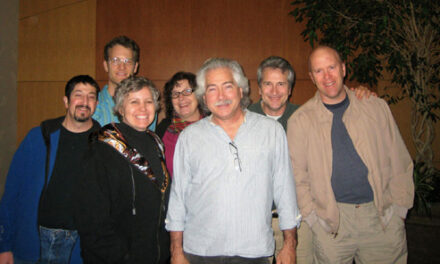