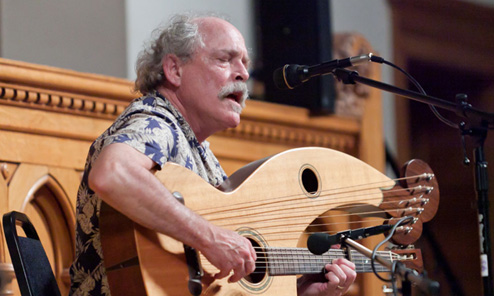 Stephen Bennett originally described him as “a character” and someone who captivates audiences with his stories and songs.  A member of the popular west coast and touring band Marley’s Ghost, in which he plays Dobro, pedal steel, fiddle, and other instruments, the talented Ed Littlefield Jr. is also a solo act.  Inspired by his friend Stephen he now includes one of two Merrill harp guitars into his performances.

Left: Ed during the Saturday night concert; below: Ed during our Friday evening open mic.

Stephen explains: “Though I’ve been hearing Ed in a band context for many years now – and was therefore familiar with his musical abilities – he had largely kept his harp guitar playing hidden from me until recently.  I urged that we invite Ed as a featured performer this year because when I heard what he was doing with the harp guitar, it occurred to me that it was similar to the way my great-grandfather used the instrument.  It’s not the way I play the harp guitar, but it’s something quite like the way most players historically have, particularly in America.”

Indeed, Ed’s American roots repertoire and style seemed to me to be representative of early “folk” singing and harp guitar playing.  Curiously, rather than either basic fingerstyle or standard root>chord plectrum playing, Ed uses a hybrid technique of a flatpick combined with fingerpicking with the 2nd and 3rd fingers.  His voice, however, is as “authentic” as it comes.

Ed regales Joe Morgan and me at the Bennett’s

To those of us who found ourselves in conversation with Ed, it was immediately clear how witty, articulate (and refreshingly opinionated) he was on a mind-boggling array of topics.  Once started, this man can converse.  On stage, he similarly shared a joke, anecdote, or ironic observation with the audience between songs, though keeping his sets – an hour segment on Saturday, then 2 concert sets – to perfect pace and length.  A thoroughly engaging and down-to-earth professional.  And yes, a charming character.

Above: Ed, calm at the center in his feature segment on Saturday

An added bonus was the surprise Stephen had planned for all of us, when Ed came out after our Water is Wide finale ended, playing the classic tune on the bagpipes.  The entire audience stopped, transfixed, as the wood-paneled Methodist church reverberated with the imposing sound – yes, his lone instrument vastly overpowered our 50+ harp guitars.  At the close of Sunday’s show, he stretched this now-anticipated encore into a medley of all manner of tunes, including the Star Wars theme, and his trademark Three Stooges tag.  A wonderful addition to our concert experience – I don’t know how I’ll be able to deal with not hearing it now every year!

(Ed: “Why do bagpipers march? … They’re trying to get away from the music…”)

An even more special moment occurred with Ed in private which you’ll be hearing about very soon.  Meanwhile, Ed seemed excited about being added to the roster of Gathering players on our Players page, so we’ll get going on that as well.  Always nice to add a new friend and harp guitar performer to the list. 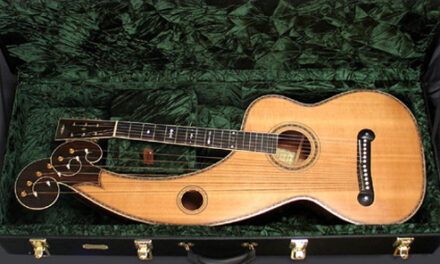 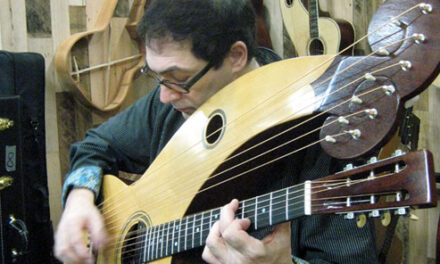 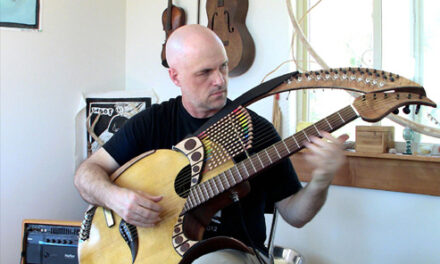 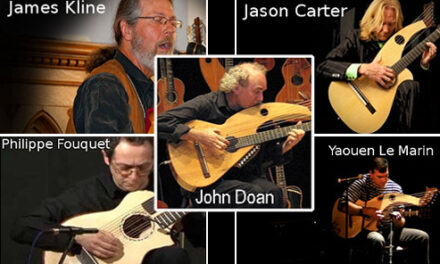