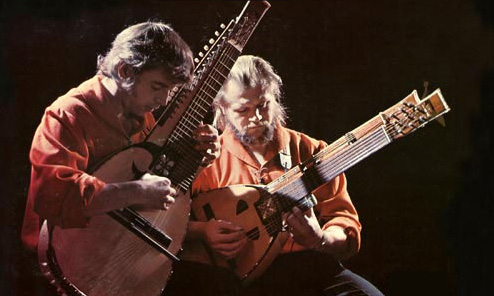 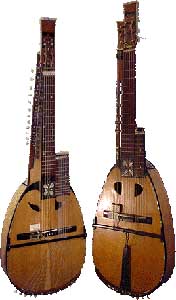 My initial question back in 2004 regarding the Combolin – or actually, pair of Combolins – was of course “Is it a harp guitar or not?”  Though the answer turned out to be “definitely not” for one and “possibly” for the other, I have still enjoyed learning a lot more about these curious instruments that I never originally took the time to uncover.

From the site’s beginning, I had this image of the 2 original Combolins included in the Hybrids Forms gallery, due to the appearance of extra floating strings (I really had no idea what they were!).  They came from a site, now defunct, called skerriesmusic.com.  I was soon asked to remove the photos by David Sinton, a former partner in Skerries Music.  It developed that David himself had no issue, and he promised to supply better photos of the instruments for my exclusive use, something that fell through the cracks and never happened.  I was, sadly, unaware of David’s unique relationship with the Combolins at the time, and ignorant as to their history, something that every fan of The Corries knows well. 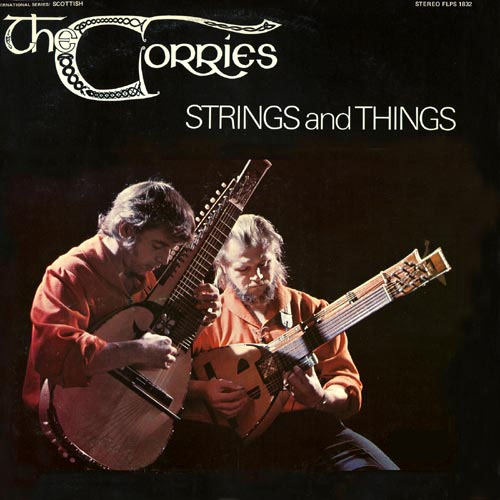 The Corries were a popular Scottish folk group a bit before my time that never crossed my radar.  Originally a trio, they ultimately found fame as a duo consisting of singers/multi-instrumentalists Roy Williamson and Ronnie Browne.  The duo was said to tour with and play 14 instruments between them.  That’s why Roy invented and built for the act the two “Combolins” (“combination of guitar and mandolin”) in the late 1960s.  Eschewing a traditional double-neck guitar and mandolin design, Roy came up with the design you see here, a “headless” mandolin (or bandurria) fingerboard cleverly juxtaposed at the end of the main neck.  The long strings stretching across the body are not a separate bank of playable strings, but the ends of the mandolin/bandurria strings fanning out to their individual tuners on the edge of the body.

But combining the two necks was just the start.  Roy also added sympathetic strings, with a jawari bridge (a la the sitar, or Fred Carlson, if you prefer) to both instruments.  They worked to great effect and lent the act quite a distinctive (and rather non-traditional) sound.  What’s especially unusual is that one instrument has 13 mid-range, sitar-like buzzing drones, while the other has 4 bass drones.  On the recordings, the latter come through quite dramatically!

Roy’s version had a guitar neck tuned open, 13 sympathetic strings (not plucked), and a bandurria fingerboard (like a 6-course mandolin tuned in fourths).  Ronnie’s instrument, with the neck tuned standard, had a mandolin fingerboard and the 4 bass strings with a jawari bridge which were plucked like a tanpura for long, vibrating root and fifth notes.   A CD compilation liner notes describe these as “moveable slides” to “vary (the strings’) pitch.”  While they can be seen in the images and videos, it is hard to know if they were simply “moveable nuts” that “set” 4 open notes that would be plucked for the particular song – or if they could be used as moveable “frets,” for playing simple figures on a given string (I still can’t tell, after listening to the recordings).  This detail would answer whether Ronnie’s instrument at least qualifies as a “harp guitar” or not.  Irrelevant, of course to a Corries fan! 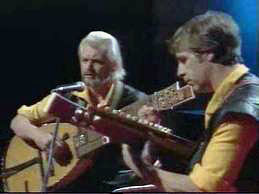 You can hear the instruments on re-issued recordings of the duo, and on a couple of rare clips of television appearances, such as Jock o’Hazeldine.  There are fan’s photo montage videos featuring songs from the old albums as well.

Back to David Sinton.  David – with who I originally had only a perfunctory communication – was the guitarist/restorer responsible for keeping the delicate Combolins playing and resonating at their peak.  When Roy passed away prematurely in August 1990, he bequeathed the Combolins to David.  David took the honor seriously and created combonlins.com (an unfinished website, no longer online), and later spent 2 years completing a charming instrumental album (Caledonian Sunset, 2002) that showcased both Combolins, along with Roy’s 28-string guitar (a 12-string with 16 drone strings) and other instruments.  Writing David again recently, I find myself unable to get a hold of him, nor find him on the web, so hope this blog gets his notice.  I’ve many more questions and would love to see the Combolins preserved with some better photographs and additional details.

I’m obviously not the only one entranced by these unusual instruments.  In 2008 a Corries fan, Benny Tetteh-Lartey, was inspired to build his own version – the Combuitar (at left) – the process of which (and songs on) can be seen on his YouTube channel. 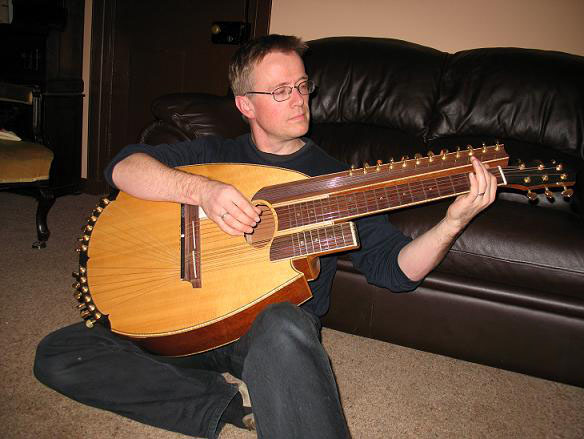 And more recently, roving Harp Guitar Reporter/Googler Benoît stumbled upon a brand new Combolin on the Facebook page of Scottish builder Mark Shiner (above, with his creation).  Shiner builds all sorts of interesting instruments at Selkie Strings.  This appears to be a more modern version of Roy’s instrument, built for musician Mike Walker (below).

I don’t yet know the story behind this one and hope we’ll hear something from the builder or player one day.

It appears that there may be new life for the inimitable Combolin! 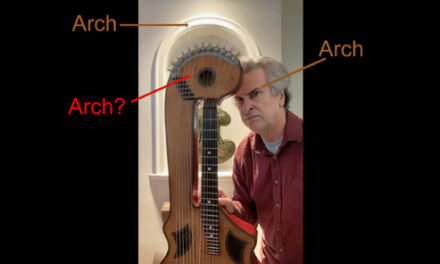 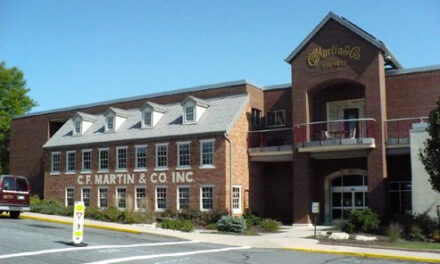