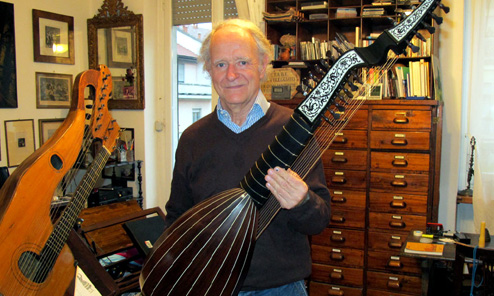 NOTE: My friend Giorgio Ferraris passed away in 2020.

After leaving the museum collections at Castle Sforza come closing time, we took a cab to our hotel for a quick refresh, then another short cab ride to the home of Giorgio Ferraris and his wife Lara, who had invited us for dinner.

I had met Giorgio on the last night of our Genoa trip 2 years ago when he came to Franco’s home, bringing for my perusal his own Gazzo harp guitar which he acquired from in1966 and came from Taraffo’s son.  I learned then that Giorgio is a professional lutenist/guitarist/scholar who holds a position at the Civica Scuola di Liuteria di Milano, teaching lute, guitar, history, and so much more.

Spending just a short evening in his home, I discovered much more (including how out of my humble element I was) as Giorgio disclosed just a few of his many scholarly and musical accomplishments, in between pulling out every one of his many lutes and guitars for our enjoyment (sorry, I forget which maker the beauty at left is).

Giorgio has been involved in the Early Music revival since the 1960s, including much time in England, studying lute with the late, great queen of the lute herself, Diana Poulton.  As a young man, he was shrewd enough to order an instrument (a swan-neck Baroque lute) from Michael Lowe, then and now considered one of the greatest modern lute builders. He showed us that exquisite instrument, plus a second Lowe swan-neck lute, among a superlative collection of historically accurate and artistically and musically stunning lutes of seemingly every possible size and form.  One expert lute he handed us (again, I apologize for forgetting the maker) was so fine, it seemed as if we were literally holding a balloon, as close to “weightless” as a large wooden structure could possibly hope to achieve – as if an optical illusion.

A stunning nearly 6 to 7-foot long “G” (80cm scale) 14-course theorbo was what we saw upon entering his living room, as he was readying for a concert rehearsal with his group, Ensemble Baschenis.  Yes, we’d be getting a free “practice” concert later that evening (Dinner and a Show – who knew?!).

The group is named after another one of Giorgio’s many specialties: he is an expert on Evaristo Baschenis (1617-1677), a painter from Bergamo who is considered to be one of the most important painters of still lives of musical instruments.  This was all new to me, but the 50 some paintings of Baschenis depict actual specimens of the period, all captured in excruciatingly accurate detail, down to the occasional maker’s stamp where visible in the tableau.  These have been thoroughly investigated by Giorgio and other experts, and the instruments fully cataloged and identified to the extent possible by the perspective and views the painting tableau’s offer.  Very cool.  He showed me more than one book that catalogs this work, which he co-authored or was otherwise consulted on.  They also did a traveling museum exhibit at one time that included both Baschenis’ paintings and the actual or equivalent surviving instruments depicted.

Anyway, we had an hour or so before dinner to head to the lower music studio/office level to see Giorgio’s collection.

Odds and ends adorn the long circular stairwell.  He had two unlabeled European harp guitars, and an interesting one that was apparently thinking about becoming a hollow-arm guitar but gave up.

I laid down on the last step to take this shot above.

The first thing I spotted in his music studio hanging up near the ceiling (just out of frame) was a duplicate of that crazy harp-viol that I discussed in the last blog. We puzzled over that a while.

In the studio with his Gazzo (on a reproduction stand made at his school) and an exquisite Michael Lowe swan-neck lute.

The intricately carved head of his other Lowe.

A beautiful back of another (my notes say another Guadagnini of a different era?).

This was a strange one!

I love the shape of this one – a Godone, copied after a similar instrument of the period by Guadagnini.

We were joined for dinner by Alessandra Milesi, the Baroque cellist of the trio.  Lively conversation and sharing of our different but similarly interesting musical worlds ensued.  When I mentioned the Italo Meschi study on my site as being a particularly proud collaborative achievement, Giorgio said he had just written a review for the new book.  (*gulp* – new book?!)

I didn’t even know this had been completed.  My friend and co-author Riccardo Sarti had mentioned that Italian guitar scholar Marco Bazzotti (a new friend I had met 2 years ago) was working on this with a nephew of Italo.  A subsequent email went directly out to Marco (I’m anxious for my copy!).

We were then joined by Marco Capucci, who plays historical (reproduction) mandolins, two of which he brought with him.

Practicing for an upcoming performance of rare music for early mandolin with other instruments.  Giorgio is playing his “road theorbo” (my term), a somewhat shorter-necked Paduan version (again, historically accurate) of his full-length “G” theorbo.

Giorgio gave us all of the group’s several CDs of rare Baroque music, re-created with a – well, let this excerpt from their website explain it.  This is scholarship, passion and discipline far beyond my own:

“Founded in 1993 by Giorgio Ferraris, Marco Luca Capucci and Alessandra Milesi, the Ensemble performs early music that has undergone rigorous philological research on scoring, performing habits of the time and a thorough re-evaluation of original repertories. With years of study, research, concert performances and recording to their credit, the Ensemble has performed on tours in Italy and abroad.
Throughout the years it has developed diverse programs featuring Renaissance and Baroque vocal music, including Renaissance dance and featuring Jewish music from the 1600s and the 1700s as well as a repertory of music for mandolin from the 18th century.
The hallmark of the group is their expressly chosen flexible structure: the basic formation adds other musicians and performers allowing various configurations to emerge depending on the concerts and events planned.
The Ensemble has made four recordings with both Ducale and Concerto of their repertory of music for mandolin from the 1700s, exploring the repertory for both one mandolin or two mandolins, as well as for mandolin and violin.”

With the amount of interest in the States in early music and the rarity of much of the Ensemble’s repertoire, I would like to see some of our organizations book them in the future.  Giorgio says that they would love an opportunity to tour the United States.

A big thanks to Giorgio and Lara for their hospitality, and to Alessandra and Marco (who kindly drove us home) for the music!

Next time: Giorgio gives us a VIP tour of the Civica Scuola di Liuteria di Milano! 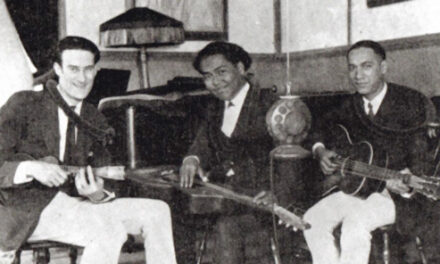 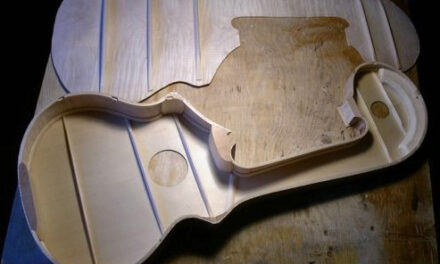 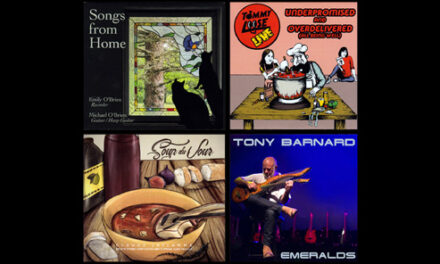