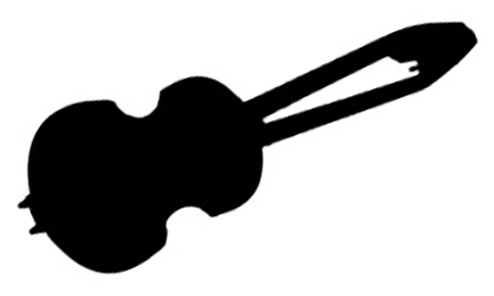 At this midway point in my French adventures, I’d like to take a short break with a long piece about a special mystery instrument.  As viewing it requires Site Membership, I may as well mention that we’re now over halfway through our Matching Grant Fundraiser for the Harp Guitar Foundation, and, thanks to the dedicated individuals listed at the top of the Donor page, we’re (only) about a third of the way there.  It’d be shame to miss out on the full potential of this drive, which ends on the 4th of July.  We have only just over a month, so at this critical juncture please take a moment to read these inspirational words from our illustrious Gathering founder Stephen Bennett.

And after that, perhaps sharing this small piece of rare, special history will help inspire you.

This enigmatic instrument was my personal “Moby Dick” for many long years now – a Don Quixote-level impossible quest it often seemed!  Even now, its intriguing details remain hidden to all but its caretakers, something I hope will one day change as this story makes the rounds and the right volunteer steps forward to assist.

My journey began over ten years ago while re-investigating sources for the “harp-guitar” term (the original impetus for the Harpguitars.net web site).  I found myself once again struggling with a curious entry in the book American and European Instruments by Anthony Baines.  By the way, this well-known 1966 book – a copy of which happened to be in my High School library in the early 1970’s – was what I credit (or blame, depending on my mood) for instigating my lifelong obsession with unusual plucked stringed instruments (I later obtained a copy of what would become my “bible”).  Yes, Baines was my hero, and seemed to know his stuff when describing these rare instruments from various European and American museums.  These included many “important” examples, but also a surprising number of hybrid oddities and obscure “one-offs” – my kind of wacky stuff!

One such entry read “Another Schirzer (sic) model, Gitarre-harfe, 1862, has the body extended upwards on the bass side alongside the neck under three basses. Instruments of these last types became widely used in Russia.”  It took me some time and all my research experience to recognize that this single sentence contains multiple errors and puzzles that only recently did I unravel.

Clearly, this was a true “harp-guitar,” right?  Well, yes and no.  The first problem is Baines’ specific term “Gitarre-harfe” (German for “harp-guitar”).  I still have no idea where he got this name, but came to believe that it must have been a derivative (or more likely an error) of a rare instrument that other scholars had earlier referred to as the “Guitharfe” (which would translate as the portmanteau word “Guitarp”).  The 1862 date certainly matches what the others listed for this invention.  But Baines’ description doesn’t match any known Scherzer instruments (note that Baines also misspelled Scherzer’s name) – in fact, it seems to be a description of a Schenck bogengitarre, a hollow arm harp guitar that usually includes three sub-basses.  Final evidence of Baines’ confusion comes in the next sentence when he explains that “instruments of these last types became widely used in Russia.”  Russian instruments were only of the typical Scherzer “double-neck” type (thin sub-bass support-neck harp guitars), not “body extended upwards” bogengitarres.

Discounting Baines’ contradictory and irresolvable entry, we return to the 1862 Guitharfe I alluded to above.

My initial organology in the early 2000’s was both helped and hurt by a copy of Curt Sach’s Real-Lexicon der Musikinstrumente, the hugely important 1913 German dictionary by the eminent scholar that I had recently stumbled upon.  So far, his is the oldest reference I’ve found on the instrument that he lists as “Guitharfe.”  His description was entirely accurate, as you will see:

“Viennese mathematician Joseph Petzval named his instrument the Guitharfe. Petzval invented it, and J. Scherzer of Vienna built it in 1862. The instrument has two fingerboards, one of which has the customary six strings over a fretboard using the 31-step tone system; the other has 6 bass strings and a 12-step fretboard.”

Unfortunately, the name Sachs gives remains unexplained.  Apparently, it doesn’t appear on the label of the sole surviving instrument, and I have unearthed no evidence or provenance for this being the inventor’s name (though it may very well have been).

Interesting description, isn’t it?  But it doesn’t sound like a harp guitar…it actually sounds like some kind of experimental double-neck guitar.

And so it appears to be. The “Guitharfe” name was a red herring, as was the inclusion of a 6-bass-string neck.  That neck is not the “sub-bass” neck that harp guitarists might be imagining (as I was) – but some sort of 12-fret, 6-string guitar neck of bass scale.  This neck is, in fact, a bit past 32” by my calculations.  The tuning is unknown, so it’s not impossible that it could be played in the manner of traditional sub-basses.  The main neck is presumably standard scale, and consists of a bizarre microtonal, partial fret, 31-step system invented by physicist, mathematician and engineer, Joseph Petzval.  Oh, and as you can see in the silhouette at left, it is shaped something like a giant mutant cello.

Yes, though it took me several years, I finally obtained a photo of it, and it is wild.  But that’s all I managed to obtain; dimensions, provenance, details, stringing – nothing else is yet known (ergo the need for some well-connected volunteer to gain access to the Gesellschaft der Musikfreunde in Vienna and conduct a further examination).

As The Harp Guitar Foundation paid dearly for the single image and limited web-use rights, you can only see the instrument in the Member’s Section.  I’ve also done an in-depth Harp Guitar of the Month feature on it, with additional comments, information and references.  This can be accessed by anyone, and I hope I receive additional expertise from interested scholars who read it.

Hopefully, I can finish the untold story of this fascinating one-of-a-kind historical instrument within my lifetime…another quest! 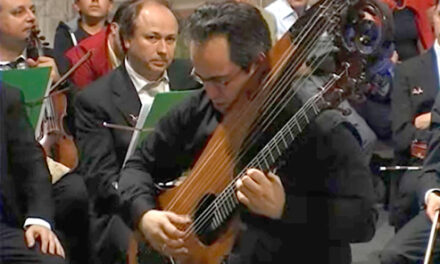 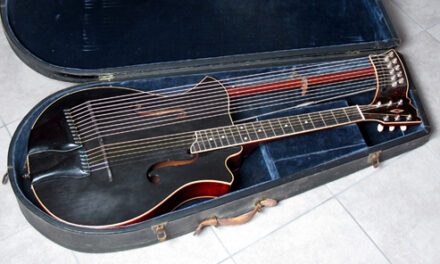 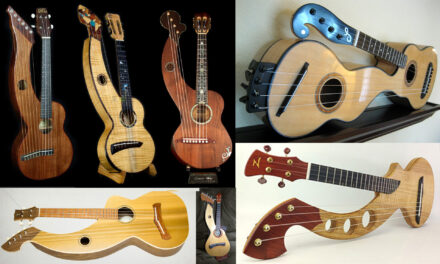