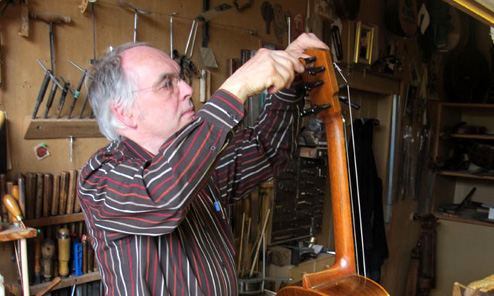 I left Philippe in Amboise shortly after 3 in the afternoon of a spectacular day.  I was headed to a little town called Saint-Chartier, whose claims to fame are: the home town of 19th-century writer George Sand, the Chateau de Saint-Chartier where a huge music festival was held every year up until 2008, and for the last 34 years, the workshop of Sinier de Ridder.

It was a 2-hour leisurely and often meandering, drive through charming small towns and lovely countryside.  As before, I had my windows rolled down and camera at the ready to shoot in a moment any particularly interesting sights through the car windows (irresponsible, yes, but less dangerous than texting).  Some random examples (sorry I don’t know the names of the towns or structures!):

Charming homes line the street, with a slightly older “home” behind

I loved how often you’d just make a simple little right-hand turn, and – ta-da! – a magical vista would appear up ahead…

In the middle of farm country stood an old castle…no traffic, so I was able to stop and zoom in…

A much more impressive, if more modern, estate…again, a quick pullover for a zoom in…

Throughout all of my car travels, I’d see these huge yellowish fields dotting the landscape.  Philippe explained that they were Colza flowers, from which their cooking oil is made.

Before long, those oh-so-comforting words came from the dashboard: “You have reached your destination.”  I was actually in the middle of an intersection, but the town was so small, I couldn’t help but find the address.

This was the home and shop (at left) of Sinier de Ridder, the early guitar experts.  The name is a combination of Daniel Sinier and wife Francoise de Ridder, who have worked together since 1971.

They buy and sell instruments, do restoration work for various collectors and museums, consult for Vichy Auctions, write books (the incredible historic guitar books published by Edizioni Il Salabue in Italy), and who knows what else.  If their names sound familiar to Harpguitars.net readers, it’s because they’ve supplied several photos and also wrote a great article for us on a Lacote decacorde.

They were gracious, accommodating and fun, as they showed me around their small workshop, packed with guitars, mandolins, tools, books, and endless file cabinets of research materials.  Some highlights:

…a very cool Gelas 7-string, with a double top, the two separate and cantilevered.  It was larger than I anticipated and sounded surprisingly wonderful.

According to Francoise, the oldest surviving playable hurdy-gurdy (as I recall)

Above: Domenico Sellas, below: Voboam…nice!

This is one of 3(?) of Lacote’s infamous “enharmonique” guitars with individual movable frets

I do not envy Daniel, who had to replace and/or futz with the 102 sliding frets!

A beautiful, early 5-course guitar made by Delaplanque.

It didn’t get dark until about 8:30, so while Francoise made dinner  (a simple but creative and fantastic salad), Daniel took me for a walk around the town.  From their street, we see the famous chateau in the distance.

The town is a lovely historic blend of the somewhat old, quite old, and really really old

(Above and below) We walked the perimeter of the chateau, which dates from the early12th century, with changes in the Renaissance and again in the nineteenth century.  Most recently, it was bought by a gentleman from Spain who has started additional restoration.  Daniel said he was a nice man, but nevertheless, he put the kibosh on the 32-year-old yearly traditional music festival held on the grounds.  Philippe said he often went; the place would be filled with pipes and hurdy-gurdy music, he said.

(Above and below) His property butts up against a large farm.  I foolishly tried to stare down the patriarchal bull.

He won, clearly having the bigger, well… (a picture is worth a thousand words).

Two mares with their foals
(Check it out – that bull is still hoping for a piece of me!)

After dinner (with a lovely bottle of wine), the couple showed me a couple of last treasures in their home.  This is a super-rare and wonderful Bugatti mandolin-banjo, made by extravagant furniture-maker Carlo Bugatti, father of car maker Ettore.  In the painting, Carlo’s sister(?) holds the very instrument.

It was now getting quite late, and I for one was getting sleepy.  Fortunately, Francoise and Daniel had booked me a room just down the street at their friend’s small 3-story house/B&B.  Leaving my car in their secured driveway, I made the short walk, the rattling wheels of my rolling suitcase on the cobblestones the only intrusive sound (unnerving, really)  in the dead silence of night in the tiny town.  It was only 5 minutes, but for some reason, it was this moment of my entire trip of interesting, foreign adventures that I was most struck by my surroundings.  Alone, in a tiny town I’d never known about, in a country I’d never visited, the denizens all indoors and silent…while I,  the stranger, had the deserted street to myself.  Totally out of my natural environment, yet feeling completely safe and content.  It was like an out-of-body experience but in reverse.  I was hyper-aware of myself, my surroundings, the sudden rush of strangeness inexplicably mixed with “it’s a small world” normalcy, and completely alone with my thoughts, happy and relaxed.

This surreal, dreamlike state turned dark when I was startled by the sudden appearance of an impossibly large rat scuttling across the road in the gloom ahead.  It was so startlingly creepy that a morbid fascination made me stop and peer over the retaining wall of the small canal it had descended into.  Sensing a furtive movement below, I quietly opened my suitcase in the middle of the street, got out my camera, turned on the flash, aimed it in the general direction and pressed the trigger.

Ah!  It was actually a muskrat (my landlord the next morning would confirm it as a “rat musque”).

Despite my presence, it came back up on the street for a friendly game of “flashlight tag”:

My bedroom was comfortable and charming (the upstairs common area)

(Above and below) Well-rested, I enjoyed a nice relaxing breakfast downstairs (more giant bowls of coffee!), talking about muskrats, town history, and harp guitars with the proprietor Vincent and two fellow travelers…

I had another two-hour drive to my next destination, so I packed up, took one last short walk to pick up the car, then reluctantly say goodbye to Francoise and Daniel, who remained waving in their front window as I headed for my final adventure…

Next: A Visit with rare instrument dealer Jean Michel Renard 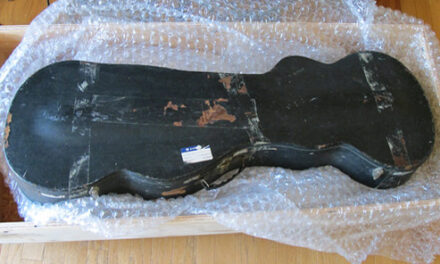 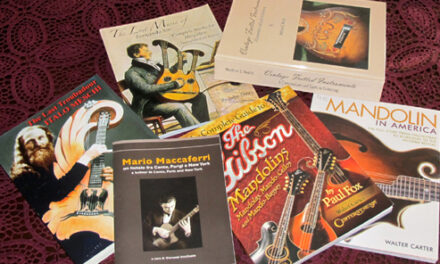