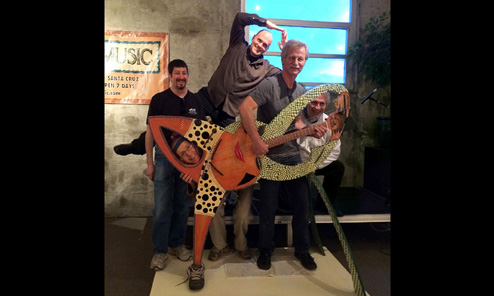 Continuing the saga of the mother of all harp guitars − Fred Carlson’s outrageous  Humanitar − here’s the complete photo journal of our trip to witness the official performance debut of what Acoustic Guitar called “Dali-like playfulness”  featuring Alex de Grassi (and friends).

Photos are by Bina Titus or myself, unless otherwise noted.

Frank and I arrived in Santa Cruz in time for a relaxed viewing of the R. (Rob) Blitzer Gallery’s Art of Guitar exhibit.  Then, with some time to kill, we took a quick sightseeing trip to the old and refurbished boardwalk.  Along the way, we stumbled upon Union Grove Music, where we spotted a Knutsen steel guitar and a Dyer (both in my inventories, but still fun to find “in the field”).  Turns out that the store had these and many more instruments from the old Spitzer Collection.

At 5pm, as my first pre-scheduled blog was going live, we went back to the Gallery to see Fred already hard at work tuning and adjusting the 40 strings on his creation:

Soon we pitched in to carry the platform and its “playable sculpture” over to the stage for a quick soundcheck, where we got our first impression of just how ridiculous Alex was prepared to look in service to his luthier friend:

At 6, Jeff and Bina Titus turned up, just in time for us to run up and pose for a group shot of the Fred Carlson Harp Guitar Fan Club! 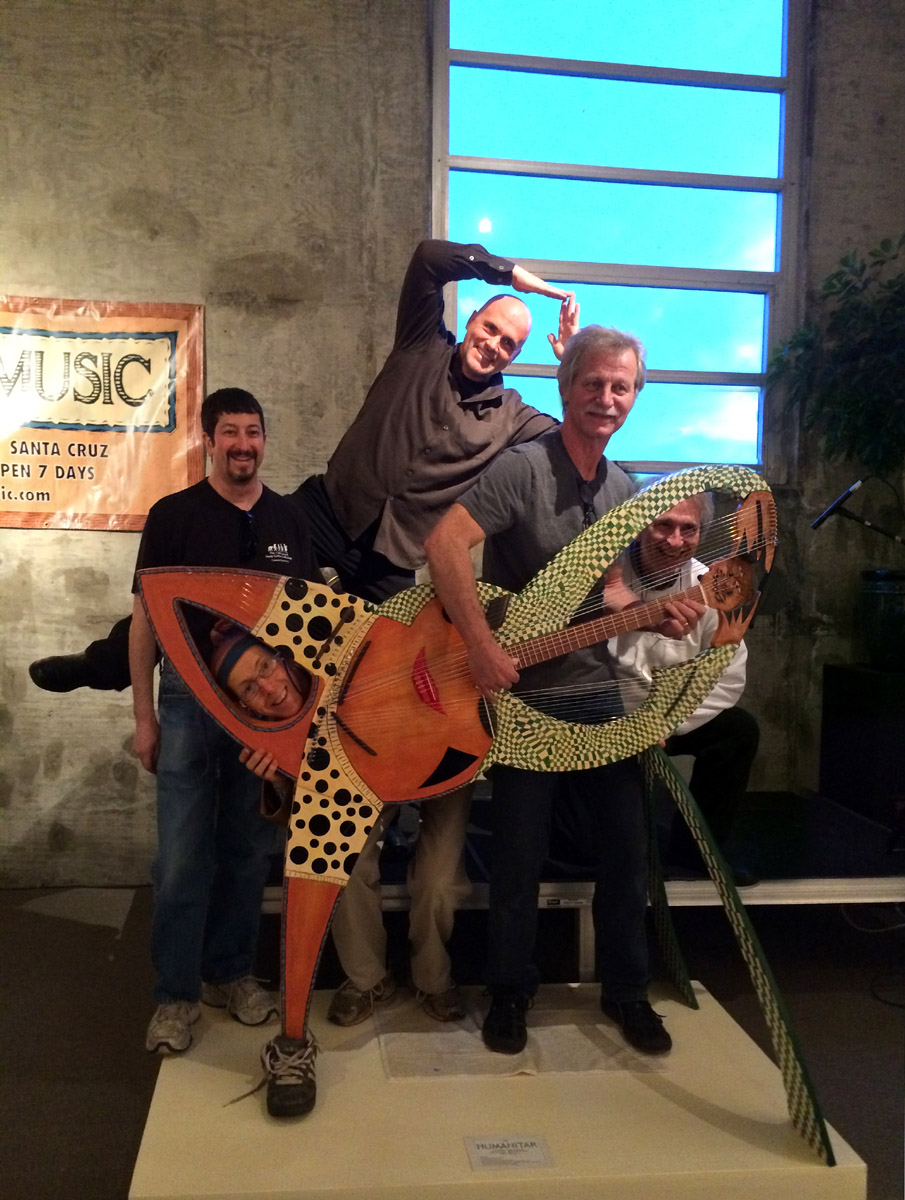 After a pleasant dinner with the Tituses, we joined the crowd mingling in the Gallery:

In the far corner, Jeff had filled Fred’s now-empty space with “Taproot,” his 2012 baritone harp-sympitar

Observing on the walls the exquisite oversize photographs of each luthier taken by Jim MacKenzie and Renee Flower, we learned that they had been assembled into a beautiful book called “From These Woods”, where each of the 18 featured builders received a 2-page spread.  We each promptly bought a copy: 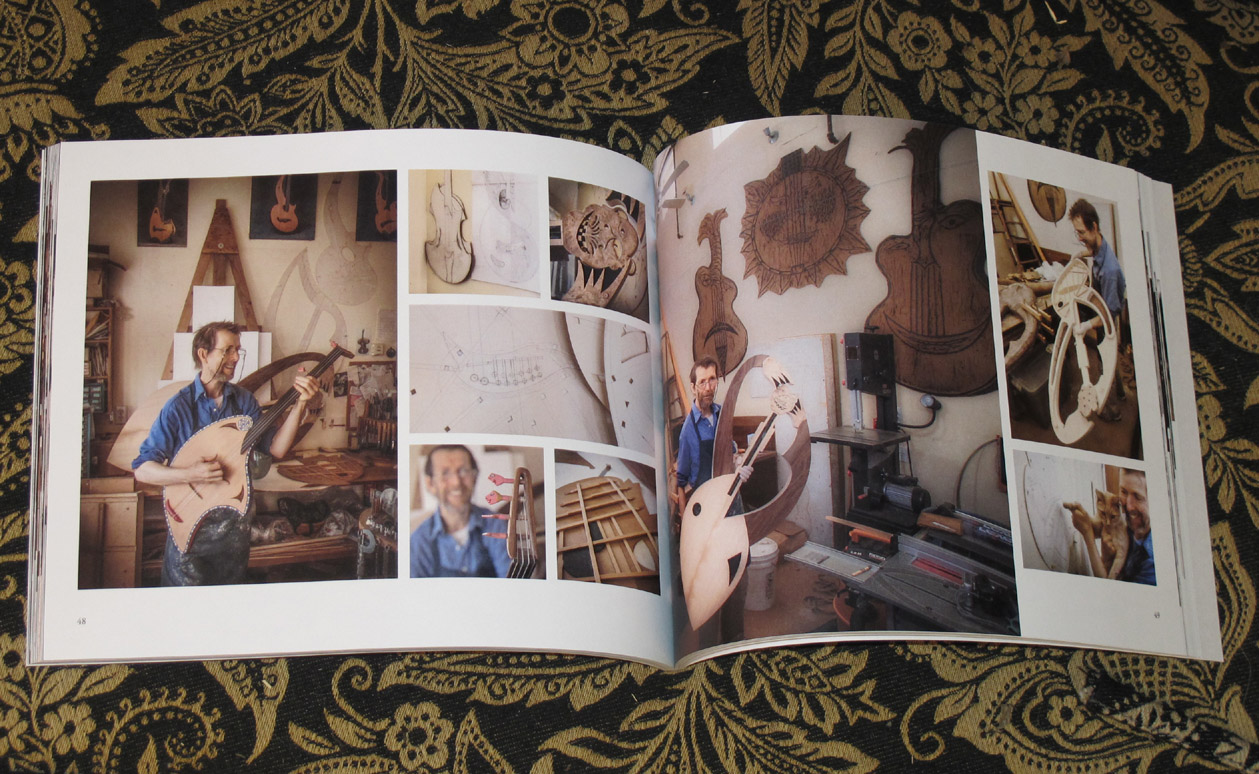 The first half of the 100 seat sold out concert consisted of lovely sets by Evan Hirschelman (playing two Kenny Hill classical guitars) and William Coulter on his custom Santa Cruz guitar: 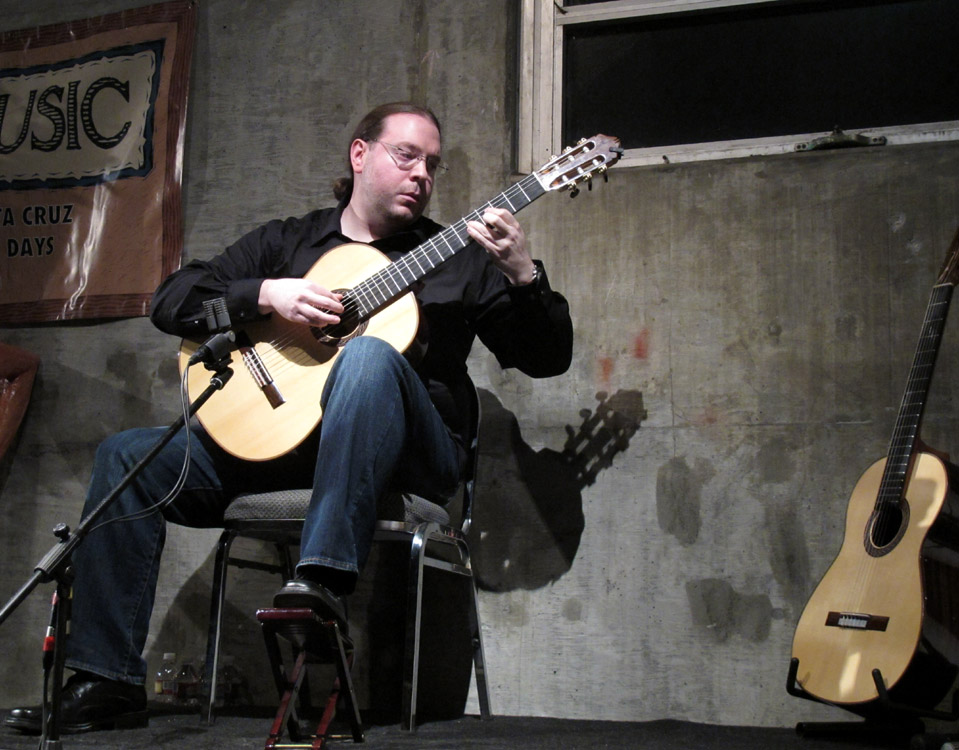 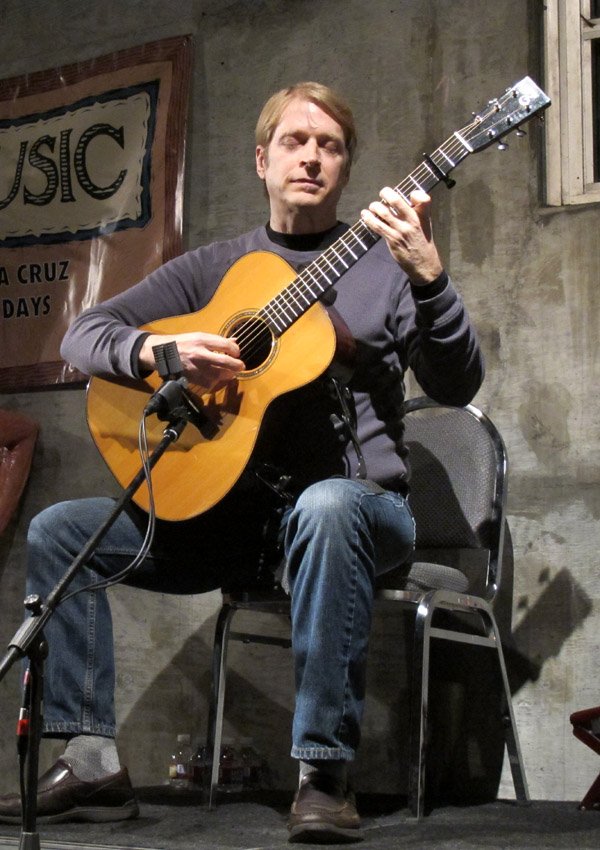 Alex’s set consisted of switching back and forth between his Jeff Traugott and 1990 Carlson sympitar: 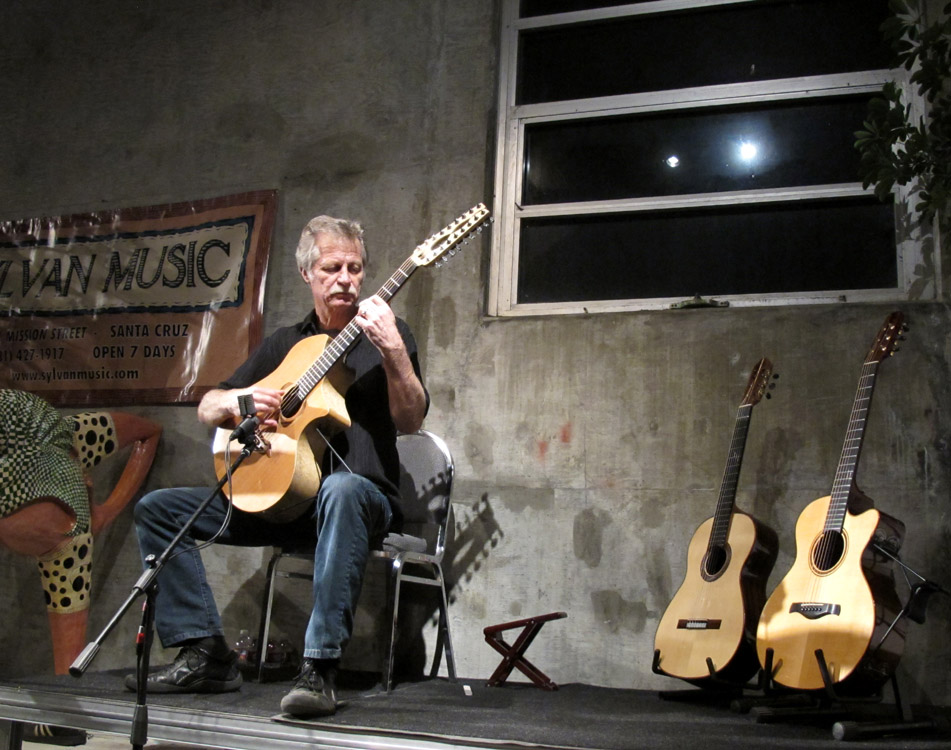 Then the piece de resistance: The humanitar was rotated into playing position, and out stepped the dapper elfin creator himself, in (naturally) matching outfit:

Fred explained the reasoning (essentially “once dreamt up, he couldn’t not build it”), materials and tuning.  (You can see the build process on my previous blog)

He and Alex then proceeded to make a few exploratory sounds, Fred handling the “bowed psaltery” option out on the leg.  The totally acoustic instrument managed to put out a decent amount of sound for all those in the audience:

Then Fred casually walked off, leaving Alex to fend for himself.  The look of panic on his face was priceless (and all too genuine).   He proceeded to give it his most valiant effort, having worked out a couple ideas a few days prior.  Still, the guy has guts!   The audience demanded an encore, and so out came Fred, while Alex called up Jeff to pitch in:

As they clambered all over the thing (Alex later described it as a “musical jungle gym”), it became clear that the more players the better.  Well, not necessarily “better”…more practical?  It was a hilarious bit of impromptu musical theater.

This photo by Jim MacKenzie (from his Facebook page here)

After the melee was over, I got a chance to sit with the beautiful (and colorful) Taproot.  The playable, hammer-able outside harp sympathetics are very cool, but require a delicate touch.  Jeff demonstrated how he could do half pitch trills on them utilizing the ingenious custom sharping levers created specifically for Fred by Brad Hoyt’s dad Jim.  I’m anxious to hear it plugged in, as there is of course the additional feature of the eight piezo pickup finger drum pads. 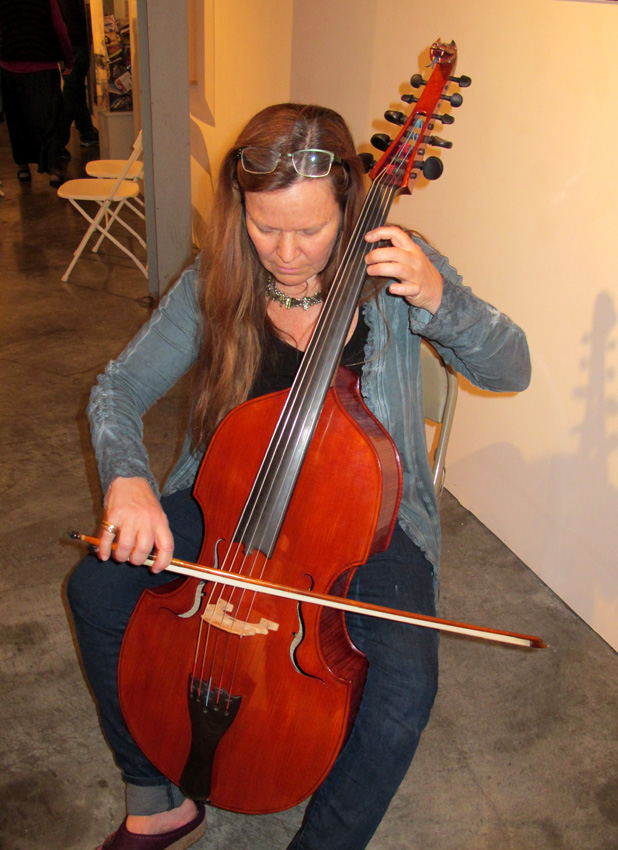 We were even treated to yet another Carlson creation, this one in collaboration with his partner Suzy: a “Hardanger cello d’Amore” built for Kris Yenney (interestingly enough, Kris plays in Nykken, a trio with harp guitarist Verlene Schermer (Benoit Meulle-Stef’s first Mozzani-influenced instrument). 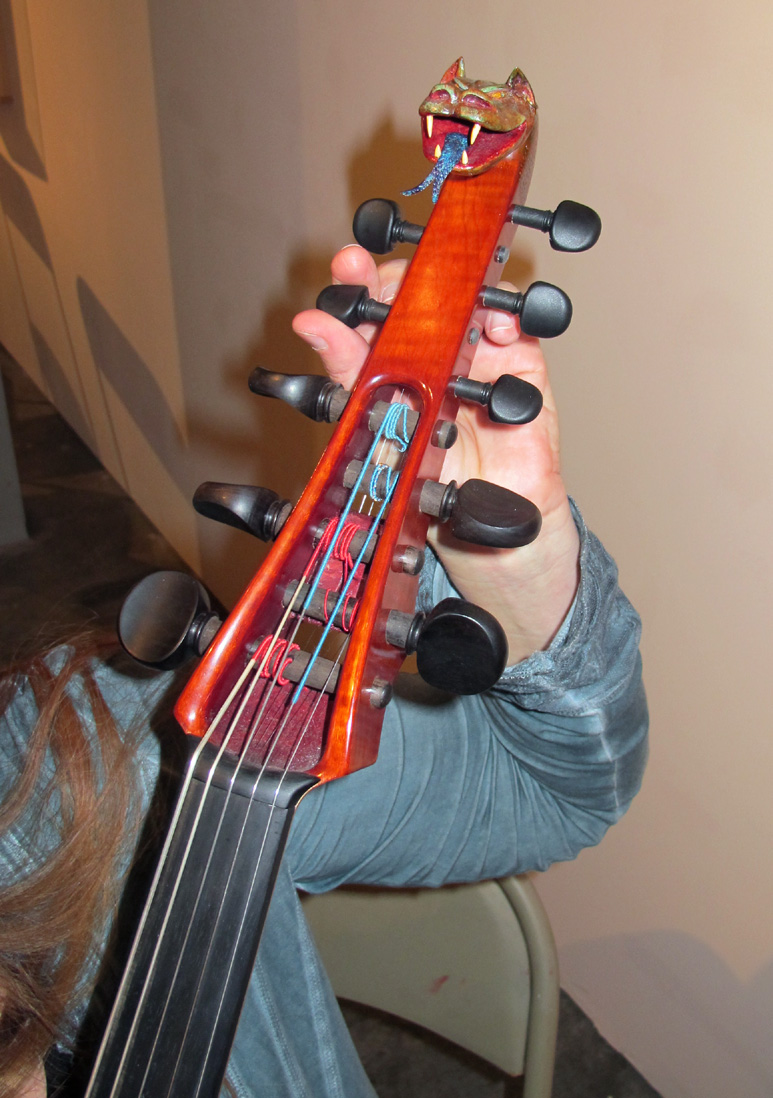 You can just make out the 5 sympathetics threading into the neck.

As all parties had to head home (a long distance for some), we reluctantly said our goodbyes, with brainstormed possibilities for future Harp Guitar Gatherings dancing in our heads.

Frank and I spent the night down the coast a bit in Monterey, and the next day took a leisurely drive down coastal Route 1.

After the overload of the Humanitar and the World According to Fred, it was somewhat of a relief to get back to the more mundane California coast, with its expected stunning vistas at every curve, the resident herd of impossibly humongous elephant seals and browsing roadside zebras (Hearst Castle leftovers). 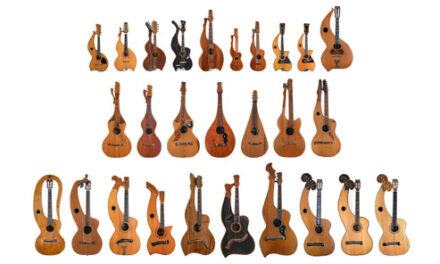 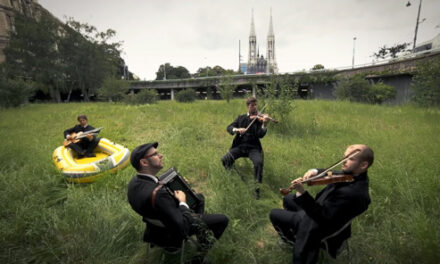 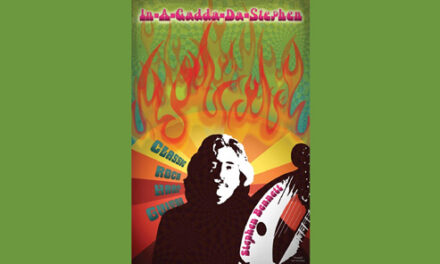 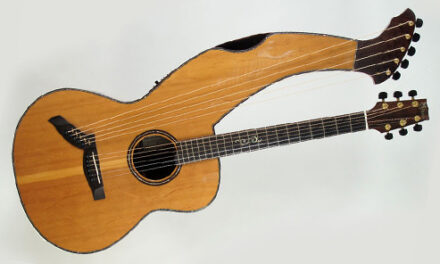