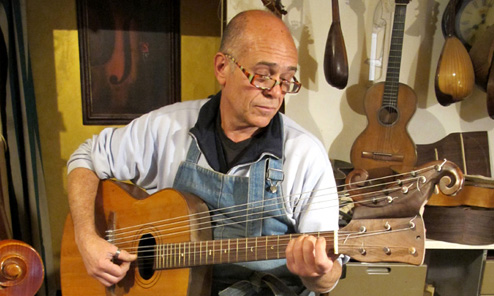 After our not-altogether-uncomfortable flight from L.A. to Paris and amazingly easy transfer to the outlying terminal, we found ourselves on the short flight to Genoa.  Upon announcing our descent, I glanced out the window and was treated to a bird’s eye view of the fantasyland Portofino, where we spent such a lovely day on our very first trip here in 2010.

The extended Ghisalberti family picked us up and we were soon ushered into what has come to feel like our “home away from home,” greeted by the 88-years-young Franco and housekeeper/companion Margarita.  After a light supper and some catching up, we hit the hay pretty early.

The next morning (or was it noon when we finally crawled out of bed?), Franco was out for his walk as we devoured Margarita’s breakfast and a pot of coffee.  We got our first good view of Genoa through the glass doors, and it was a lulu: the Costa Concordia, parked right outside Franco’s patio.

You probably recall this unfortunate disaster of 2012 (the captain’s walking around carefree as they say it might take 16 years until he is sentenced for his part).  Lucky Franco can look forward to a free show as they expect to take a year to dismantle the hulk down to bits small enough to haul off.  Think of the hours of entertainment!  The noise!  One’s heart goes out to the poor souls who happened to find themselves in this section.

The remainder of the day (Sunday) was spent relaxing, eating and visiting with the family (including Giulia and Iroki who had driven down from Milan to see us).

The next morning I was dragged out of bed and a sound sleep (by Jaci…or was it Franco?) for a day of visiting luthier friends, always on the agenda.

First up was Gianmaria Assandri, who by chance had been out of town on both of my previous visits.  I’d received photos of his shop and various harp guitars taken by Franco over the years and expected to find more on this trip.  I wasn’t disappointed.  Above, he tunes up an unlabeled instrument that we’re 99% sure is another by Settimio Gazzo (Taraffo’s beloved luthier).

This simple symmetrical body shape is actually rare and uncommon for Gazzo.  This particular example happens to be unusual for its size – it is the largest found to date at 18” wide!

Three other instruments (which we took outside to hang on a handy photography hook) included left-to-right a 1908 Gazzo (16-1/2” wide, lighter weight and better sounding), a Naples hollow-arm 6-string (reminiscent of the c.1900 Porto from Sicily), and a c.1900 instrument from Valencia, Spain.  As always, I made a point of carefully analyzing the bridge and particular sound of the two Gazzos, which I will be referencing later.

Most of these instruments are in for repair (some are Gianmaria’s own).  There were two more unlabeled instruments hanging in the shop, the one on the right one of the many Gazzo copies by his Genoese followers, and the left instrument showing a different theorboed headstock design.

Gianmaria also builds when he can find the time (he’s always backlogged on repair work); he built this arpeggione (bowed guitar) out of beautiful flame poplar.

During this time, Jaci was out shopping and sightseeing.   And you know what that means!  If you thought she’d exhausted the supply of Genoa’s Doors Interesting to Tourists (well, to us anyway), you’re sadly mistaken.

We were now all to converge for lunch, and the walk took us right through the wonderful town square you’ve seen in each of our Genoa trips.

Old and new friends: Next to Franco is neighbor Luca, who helped translate for us during the week; against the wall are Giorgio and Rosella (Franco’s daughter); next to Jaci are long-time friends and harp guitar patrons Luisella and Alberto Basso, and next to them (and me) are new Franco neighbors Janns and Else, a Dutch couple who lived and worked in Boston for many years before recently retiring in Genoa (after vacationing in and checking out a lot of places). Margarita is at the end.

We then met at the taxi stand where who would we see but our special translator friend from three years ago, Chiara! She would accompany us to visit Antonello Saccu, who always has some new interesting things to show us (you may remember his latest find that Franco shared through my blog of last July.

Next: Antonello’s cluttered shop of wonders! 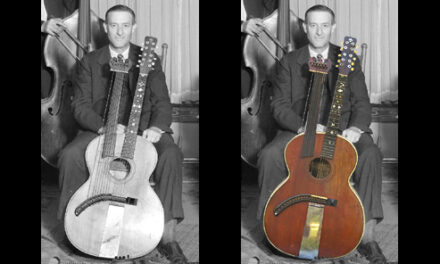 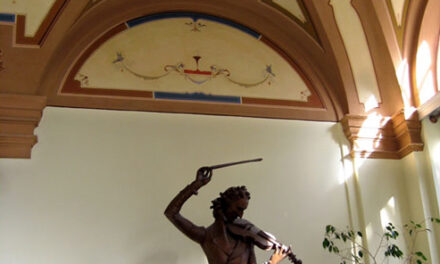 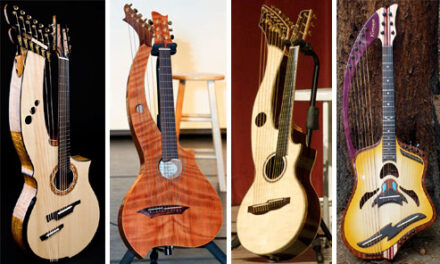 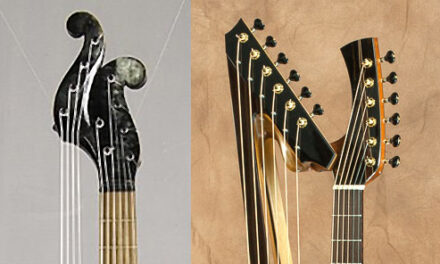