Once again I studiously avoided trying to go to NAMM this year, that insane musical zoo in Anaheim…but there were many people I wanted to meet, some for the first time. There were even a few surprises!  By sheer luck, the one day I could make it (yesterday) was the single dry day during an ongoing series of Southern Cal rainstorms (desperately needed; we’re whining, but not complaining).

As always, I’ll be focusing on harp guitar news, but throwing in a bit of other stuff as well. 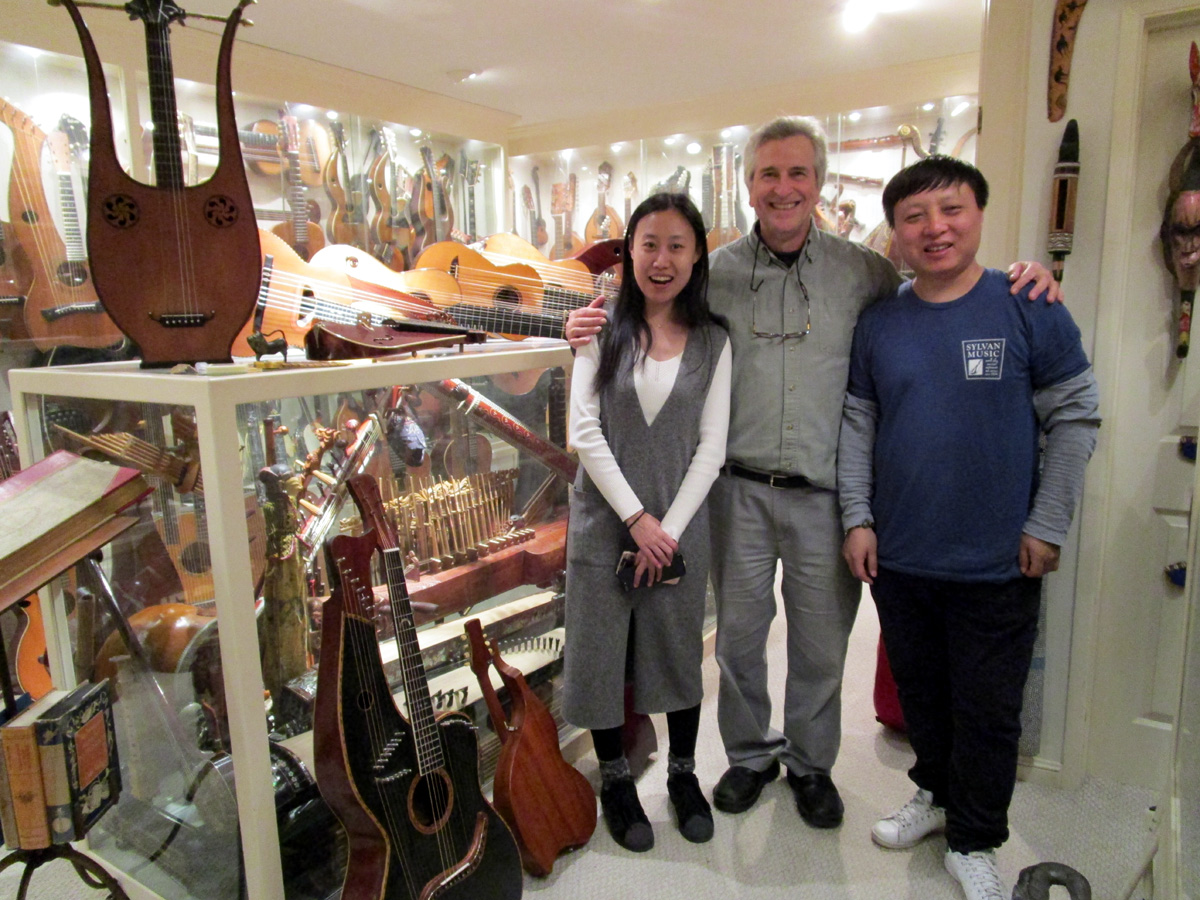 The Monday prior to NAMM, I had a visit from Ranphi and David Li, who run fingerstylechina.com and are now very excited about promoting the harp guitar in their country. 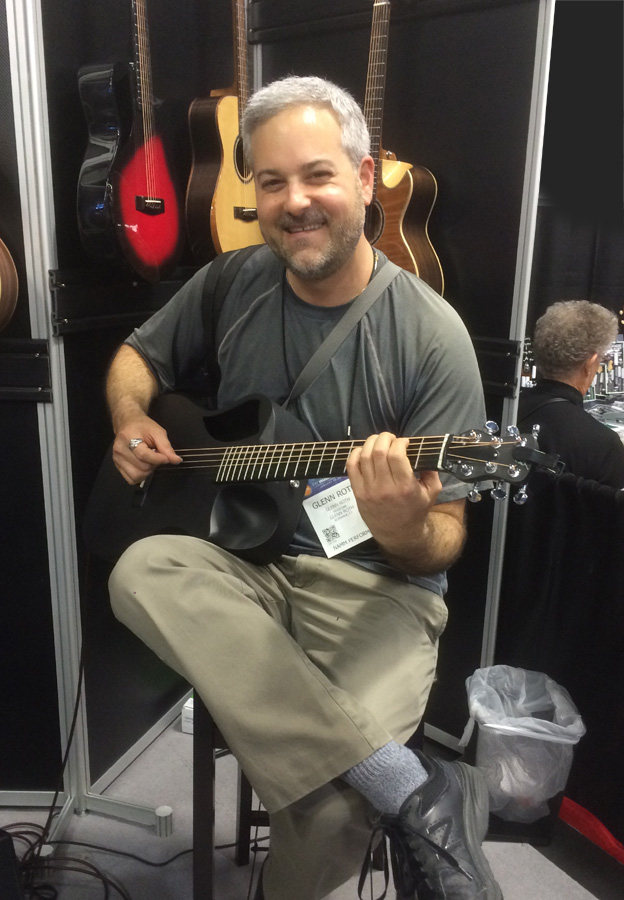 On Saturday morning, the first person I immediately stumbled upon was Glenn Roth, a great guitarist who some of you may remember attended the 9th Harp Guitar Gathering.  We didn’t have a chance to catch up as he was doing one of many demos of the day. 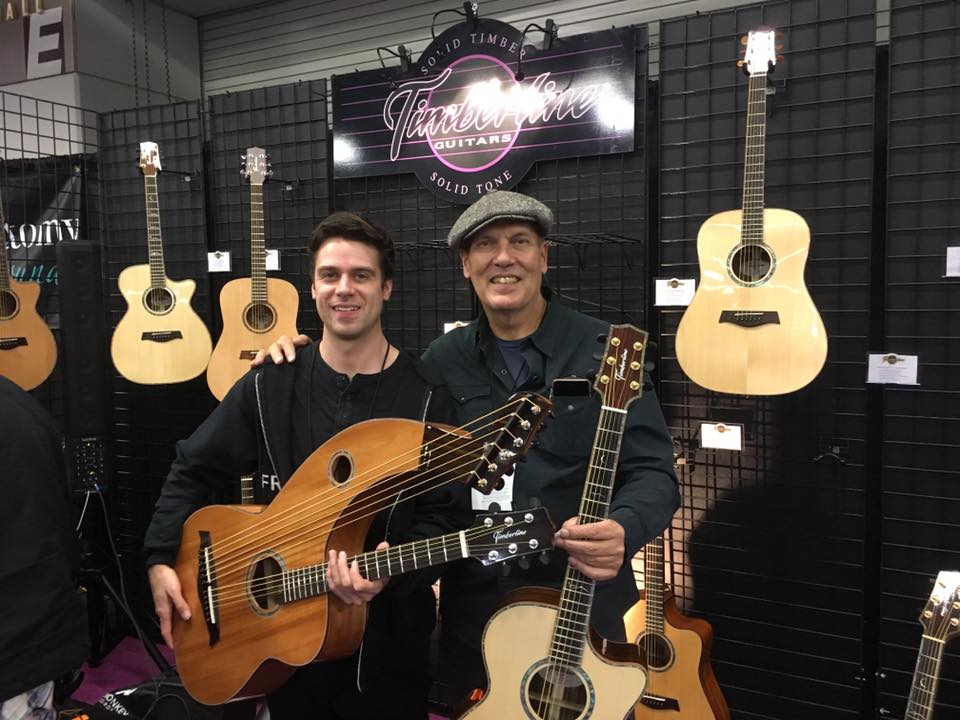 I had once sold sub-bass strings to a fellow named Rob Smith, who I learned owned Timberline Guitars based in San Diego.  They were for a prototype harp guitar for his endorser Jamie Dupuis.  The fellow next to Jamie is John Vonk, his friend and supporter in Hollywood and the fellow who brought him over to my place when Jamie was 20 years old to try out one of the first Chinese Holloways.  Now 26, Jamie has come quite a long way!  I have a feeling we’ll be hearing more from Timberline down the road as well.

I next ran into harp guitarist and fingerstyle guitar giant Don Alder and spent time catching up with him.

Upstairs, they tried a new thing this year, creating a slightly less horribly noisy curtained area for a Boutique Guitar Showcase.  Lots of cool stuff there.  I immediately spotted those incredible Art Gallery-meets-high end guitar Teuffel instruments.  Hey, wait a minute – from the back, the rep looked strangely familiar, though I have only ever seen one photo of the elusive guitarist… 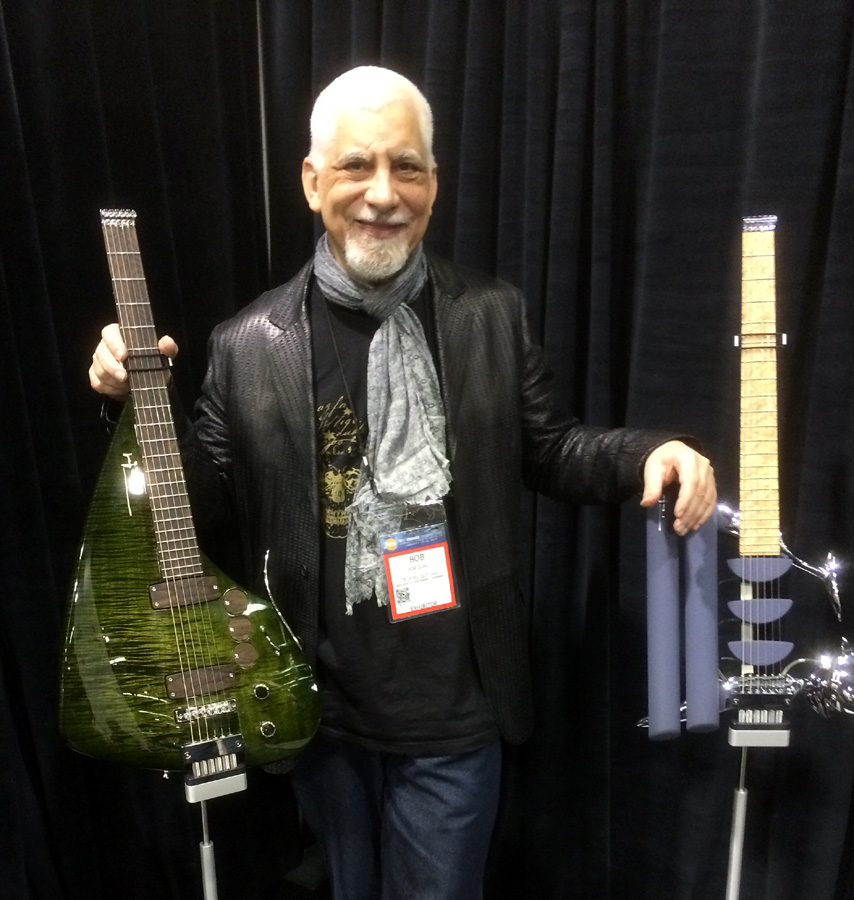 Yes, it was the fabled Bob Gore.  We’ve been sporadically corresponding over the years, as he has an incredible working guitar collection, including several harp guitars.  It was John Sullivan’s #5 that I sold for him a couple years ago through Harp Guitar Music (he kept #2).  It was also Bob who loaned Fred Carlson’s New Dream to both the Museum of Making Music for our first harp guitar exhibit ten years ago and also to Alex de Grassi for a video and his piece for my Harp Guitar Dreams CD.  Other current harp guitars include two Brunners (a travel and a non-collapsible), the original Klein electric with super trebles and a new Sedgwick 21-string (uh, Steve, you didn’t tell me that!).  Bob actually designed two of the Teuffels there (not pictured) – quite an interesting guy, and we had so much to catch up on. 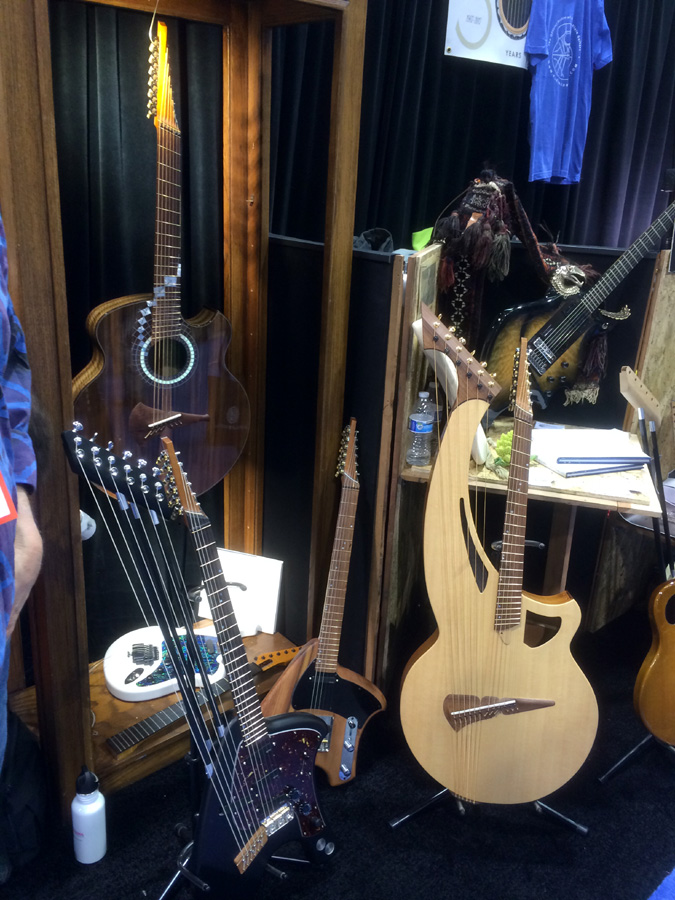 Right around the corner was Steve Klein’s booth.  As you saw in my past blogs, Steve is rejuvenated and is diving back into harp guitars big time.  That’s the acoustic prototype – finished in the nick of time – that he brought to our Gathering three months ago.  In an ongoing collaboration with Dyer Guitars (who were not in attendance), Jim Worland built the body, Steve did the neck and Steve Kauffman did the bridge.  The brand new electric was recently completed by Jim and Steve Klein.  It is much like the original Hedges instrument, with the main differences being a longer lower treble extension and of course the new Klein headstock rather than the headless Steinberger system. 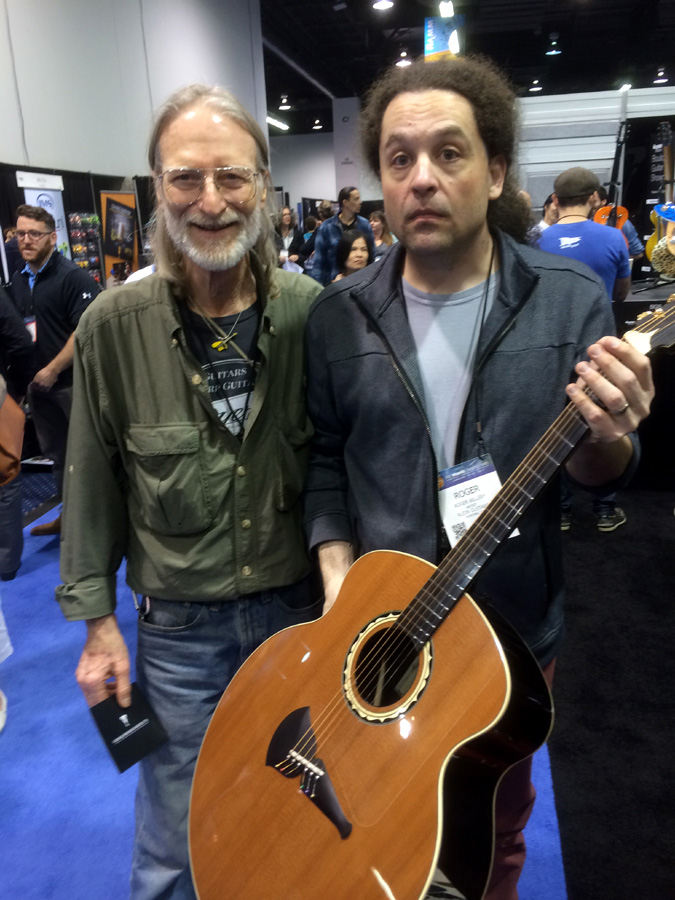 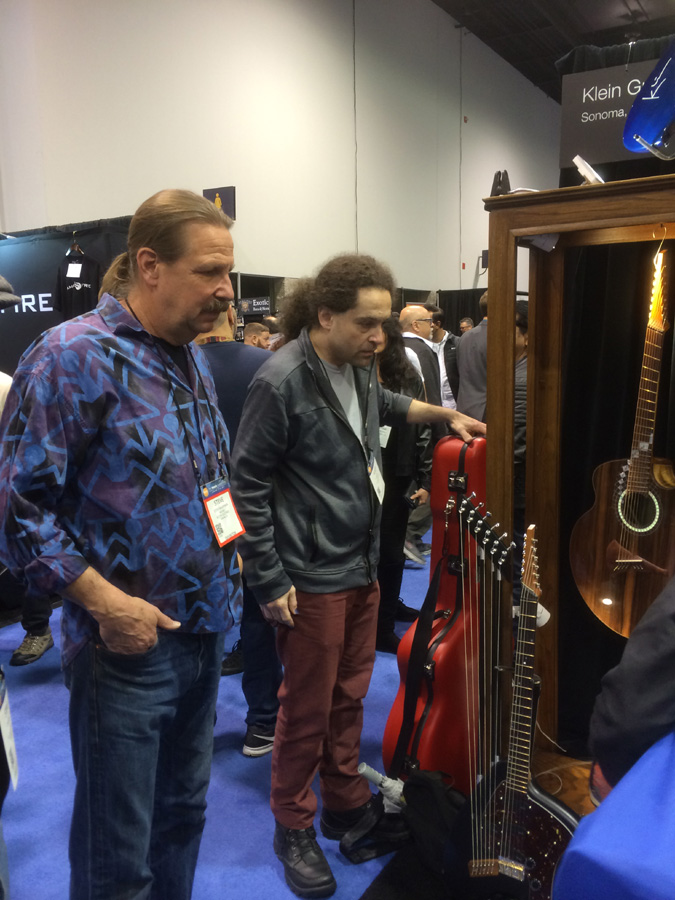 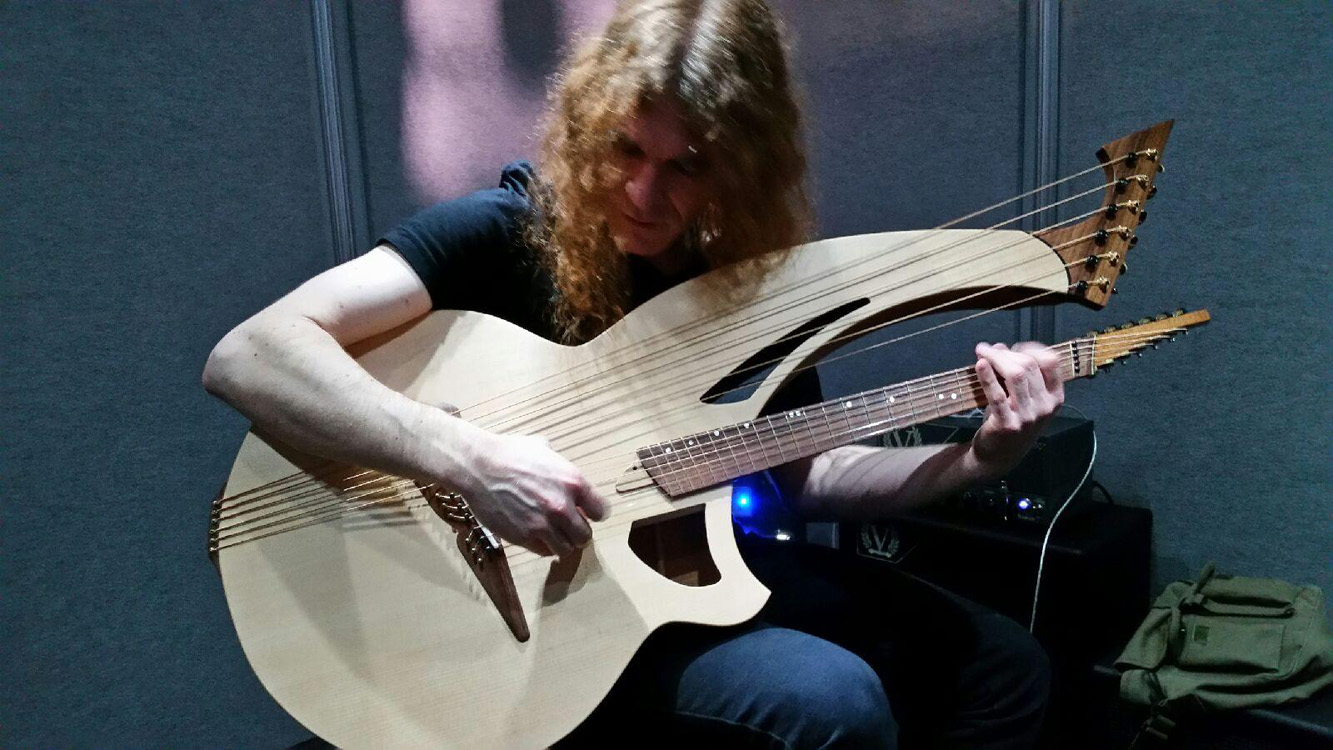 I missed his Klein demo, but later caught up with my old friend Tim Bertsch from Washington.  He loves vintage HGs like I do and came to HGG6 in Portland many years ago. 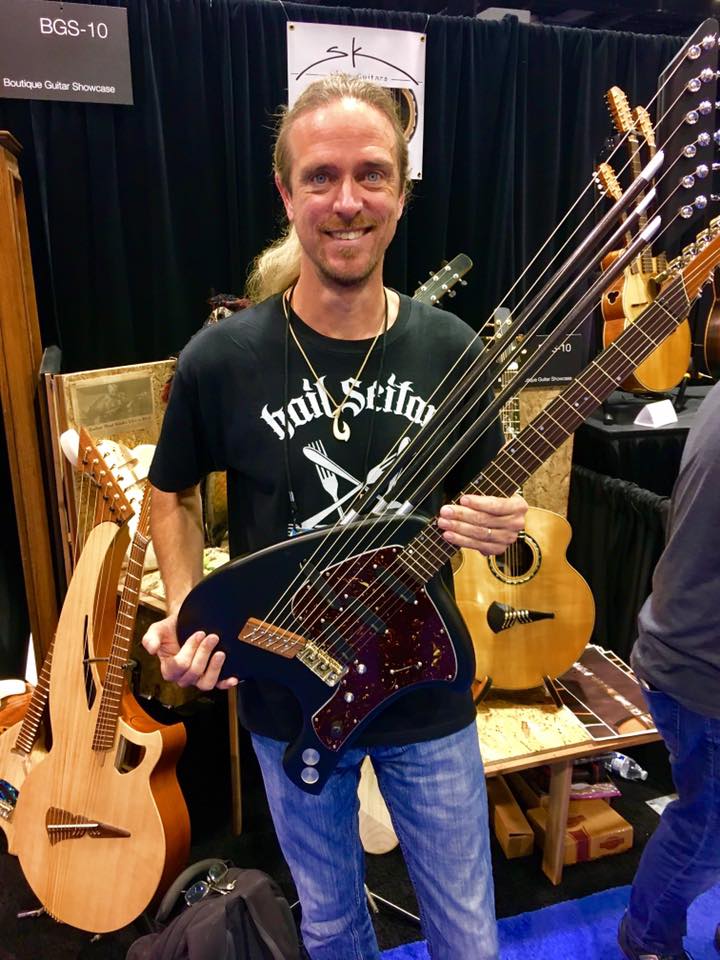 Adam Werner models the electric.  It was Adam who fatefully hooked me up with Steve Klein last year.  Adam and Tim both are going on record as committing to attend HGG15 this October in Carlsbad.  Steve has also committed to being part of the weekend’s luthier panel and exhibit.  I think I mentioned last blog that this is going to be epic! 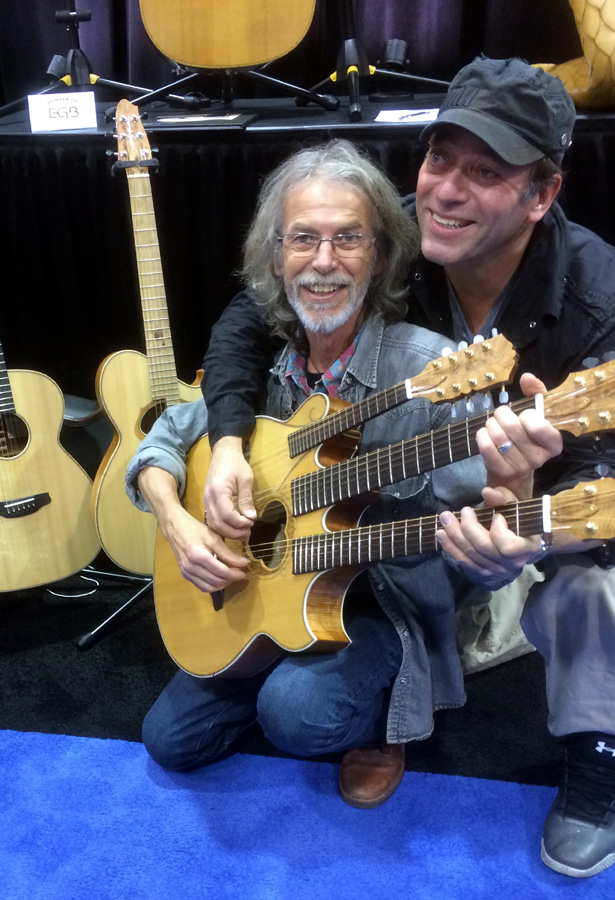 An extra special treat was meeting and seeing the instruments of the legendary Andy Manson from the U.K.  He (and friend) are demonstrating his trademark tripleneck mando/12/6-string – the instrument he famously built (on spec!) for Led Zep’s John Paul Jones. 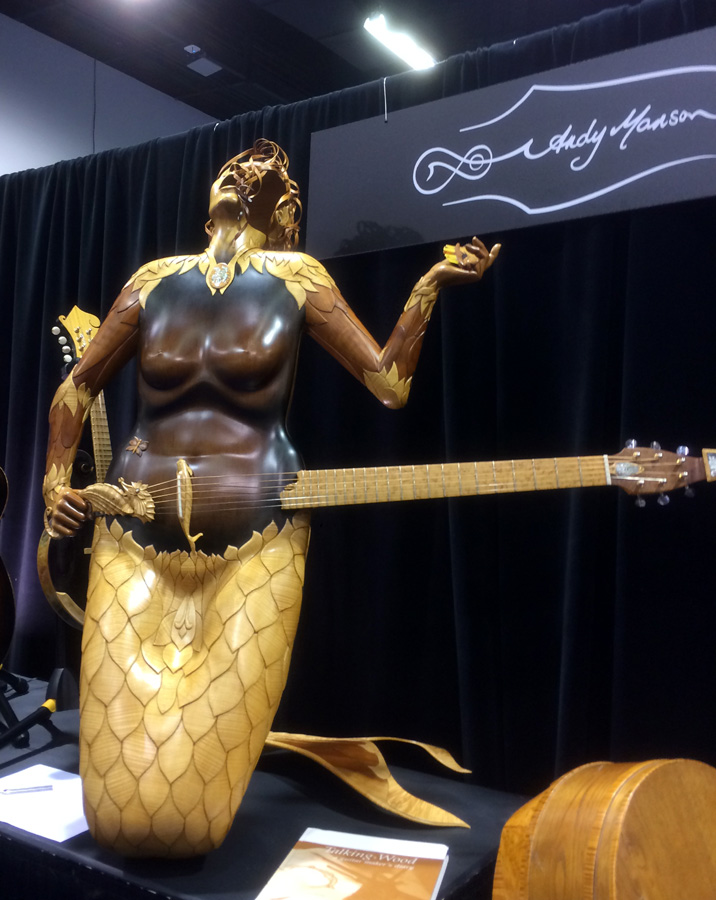 Unbelievably, the owner of his incredible carved mermaid guitar sculpture had shipped it over from Europe for the display.  Stunning on so many levels, it reminded me of Fred’s work (someone Andy admires as well).

Its custom carved solid wood case alone was worth the price of admission. 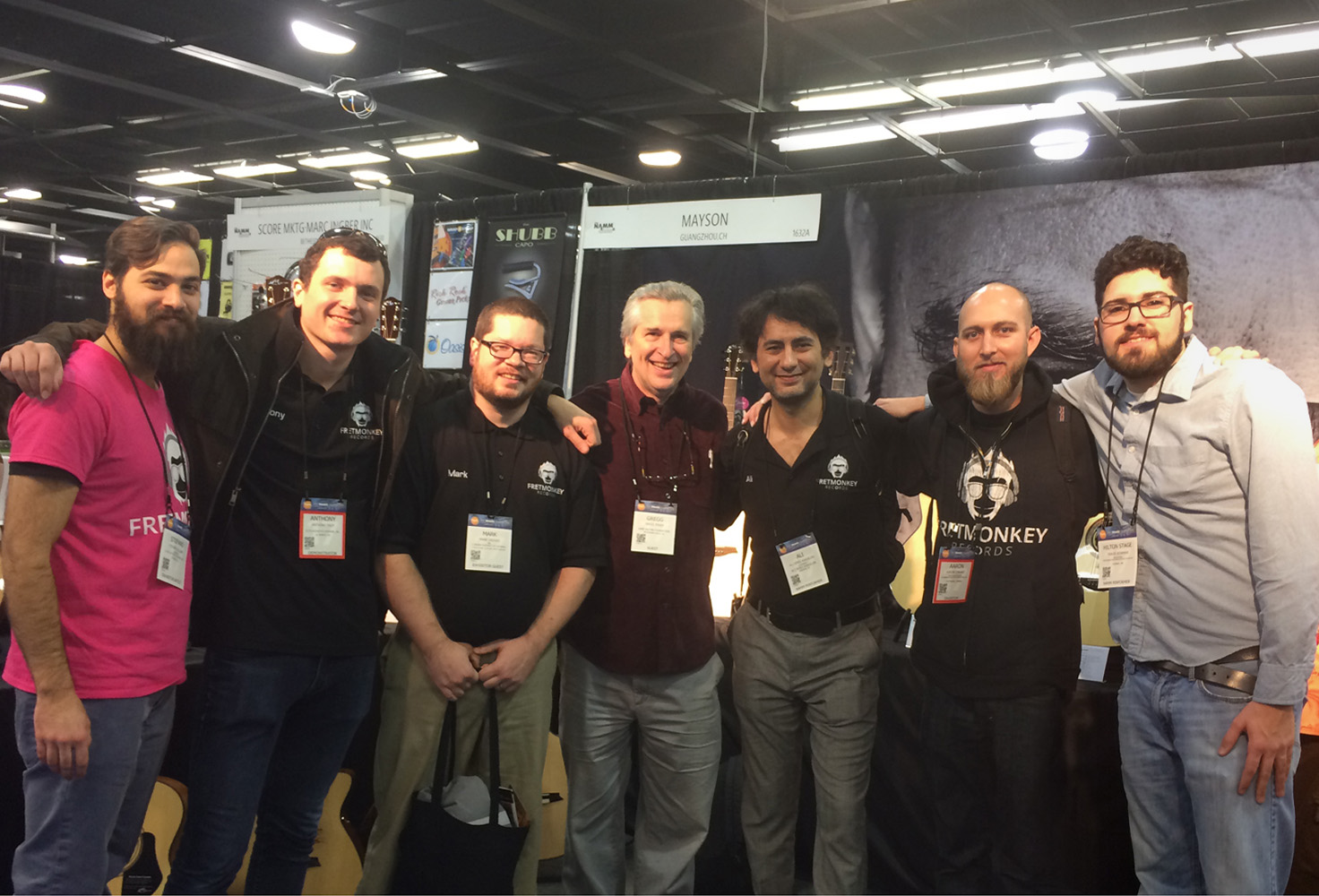 I finally tracked down and caught up with some of the infamous Fretmonkey gang.  Left to right are luthier Stefano Vellone, Anthony Troy (who told me he counts Stephen Bennett as a mentor), Mark Grover (hoping to complete a book of harp guitar transcriptions by an assortment of players – he even did one of mine!), me, Ali Deniz Kardelen (recently recorded his first HG tune), Aaron Edward, and Travis Bowman, harp guitar whiz.

In other harp guitar news, I later ran into Calum Graham (getting his new Noble HG in March) and Muriel Anderson, but missed meeting Adrian Bellue (someday, pal) and hooking up with Alistair Hay and a couple others. 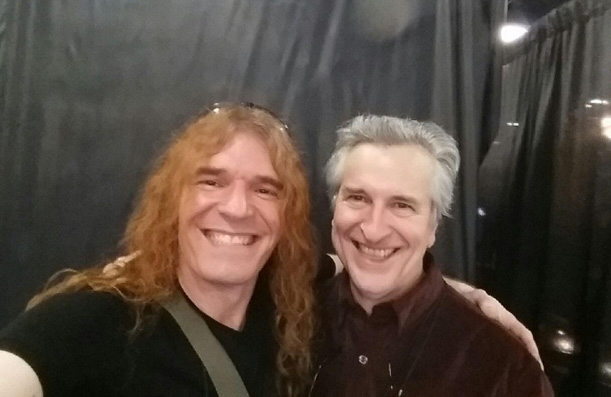 Heading out, I ran into (almost literally) Tim Bertsch, who didn’t know I was there.  He still does straight ahead jazz, acoustic harp guitar, and has been busy with his heavy metal group Jaded Mary opening for big acts all over the place.  We had quite the chuckle when he told me they opened for the Tea Party (he heard about the scandal after meeting the infamous Mr. Martin).

Above, one for serious, below, one for headbangers: 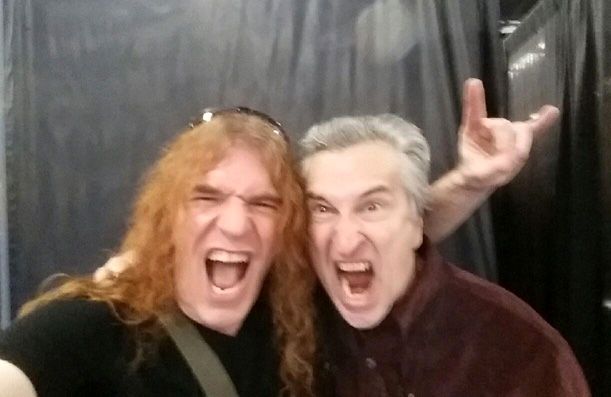 McKee’s got nothin’ on us. 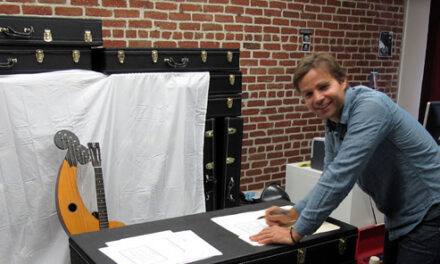 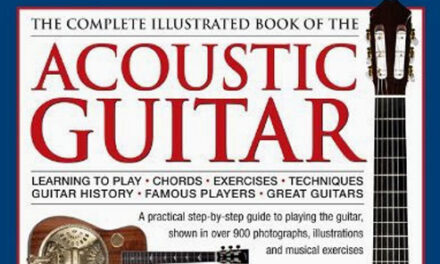 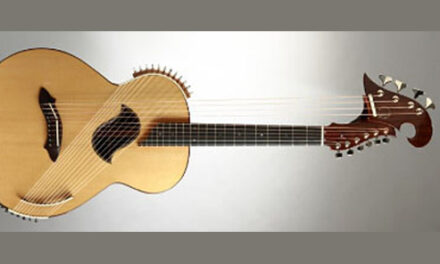