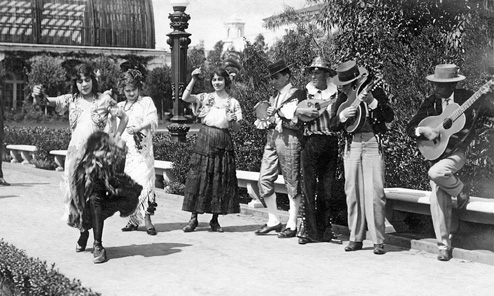 There’s nothing I love better than over-the-top Knutsen eccentric esoterica, and this about takes the cake. 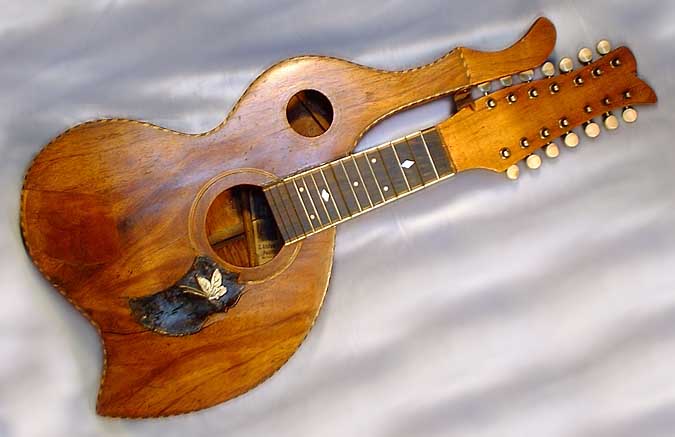 Knutsen put his hollow arm on just about any instrument that caught his fancy, and the Spanish bandurria apparently did.  And so, back in 2003 the first Knutsen harp bandurria turned up, owned by Alan & Rachelle Frazier. It was immediately added to the Knutsen Archives as #HBA1. That one has an incredible 14 strings – and took me some months of investigative work to figure out what in the world Knutsen had actually intended it to be. In the end, I didn’t really figure it out, as the end result seemed to remain “a combination of bandurria, tiple and mandolin.” As the bandurria was closest – and was also an instrument I am fairly certain Knutsen was familiar with – a Harp Bandurria it was!

Alas, all was then quiet on the harp bandurria front for sixteen years…when a Facebook group posted this image below, asking what it might be. There were many guesses, due partially to the poor resolution – no one was sure how many strings it actually had. And (sadly), no one, other than my colleague Paul Ruppa, seemed to know that there were such things as harp mandolins and The Knutsen Archives. 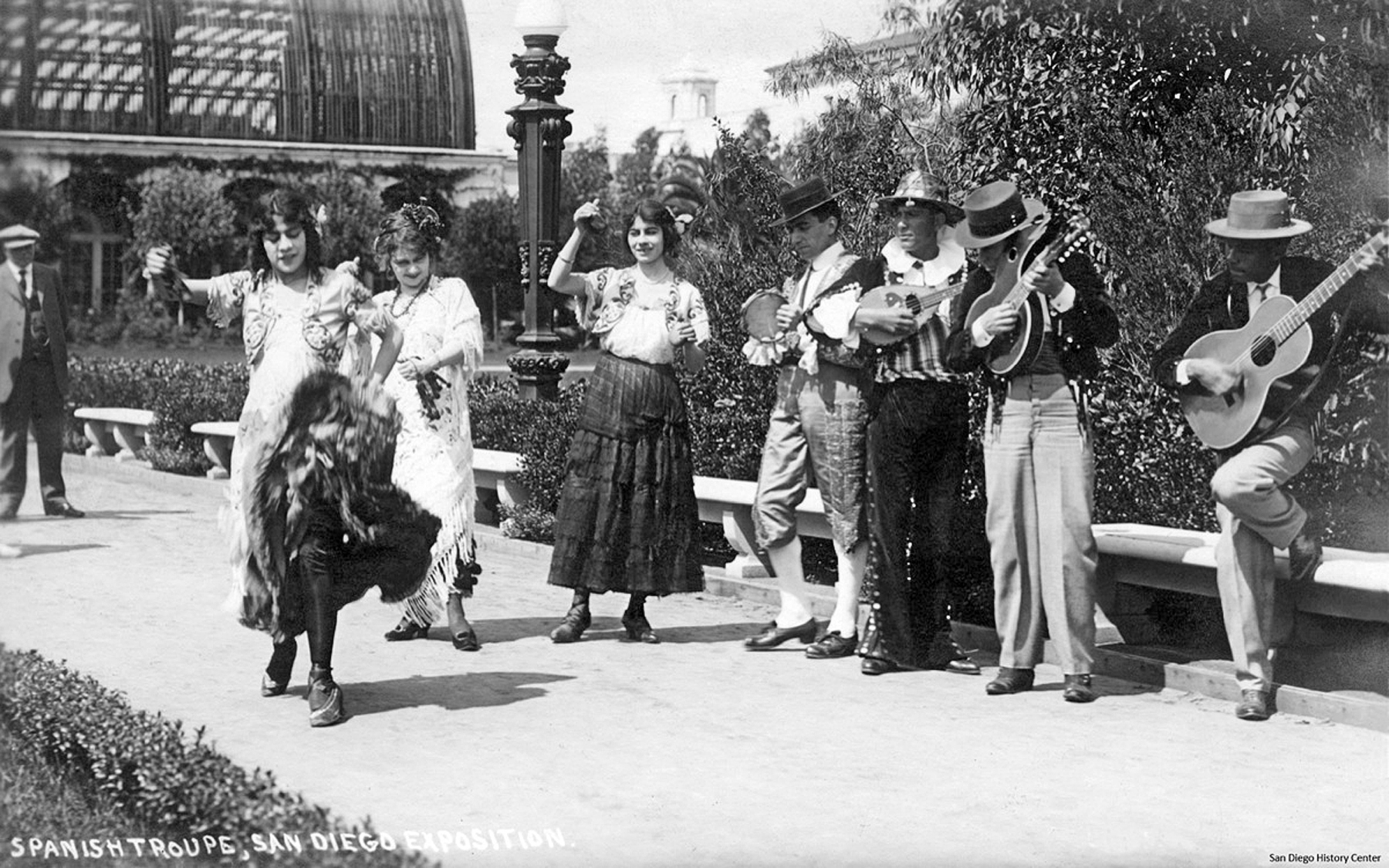 Eventually, a kind user pointed me to the original source (as you might imagine, finding zero sources on FB is a particular pet peeve of mine). It took some careful keyword searching, but eventually he found the link on the Boom California Blog.

And…everything clicked into place! The photo – of an anonymous “Spanish Troupe” – was taken at the San Diego Exposition. This was southern California’s answer to San Francisco’s PPIE in 1915. Actually, San Diego had been planning theirs since 1909, and it opened just before San Francisco’s on January 1st, 1915 and ran a full two years.

Chris Knutsen was then in Los Angeles, switching over to his “New Hawaiian Family” instruments, which were seen at the San Francisco Expo. Well, how not surprising that they were also seen at the San Diego exposition! 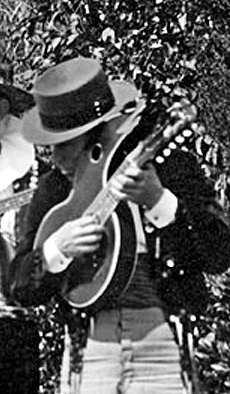 This harp bandurria may have been built specifically for the musician in this group, and presumably sometime just before or during the start of the exposition. I would love to know where and how that happened.

Can you count the tuners?

The 6th one on the top right is hidden amongst the foliage in the background, as it the tip of the arm.

In the image below, I outline the headstock, the hidden top tuner knob and all six shafts on the right side, and also the theoretical arm tip and body flare hidden beneath the player’s arm. 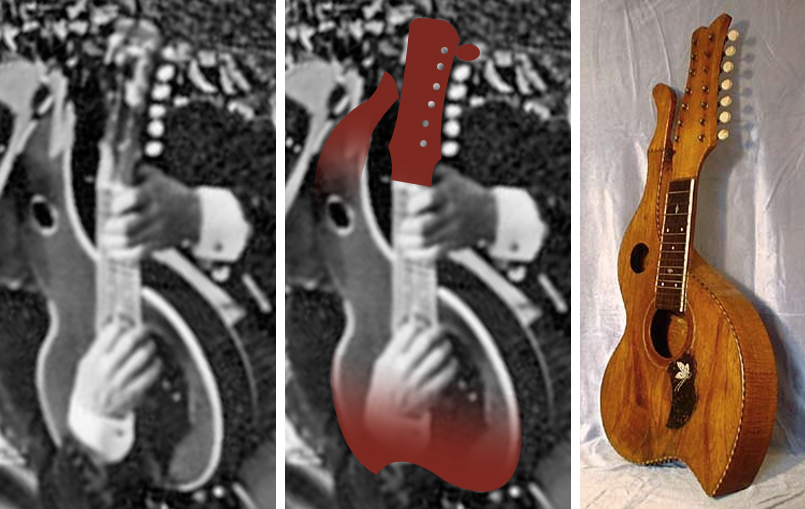 There are six tuners also on the left, so we can go out on a limb here and suggest that, with its short neck, this is almost certainly a standard harp bandurria with 2×6 stringing configuration.

Note that its lower pointed flare is opposite that of the existing harp bandurria, shown next to it.

And also how the player is the only one in the group who can hear what he’s playing!

All in all, a fantastically rare piece of Knutsen-in-Southern-California history. 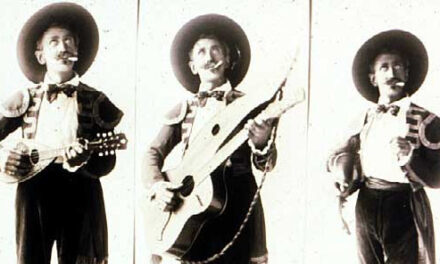 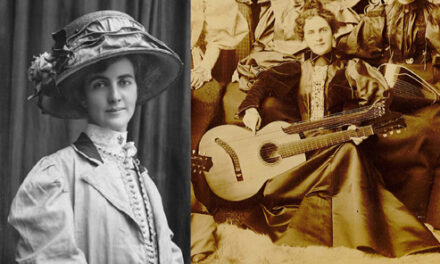 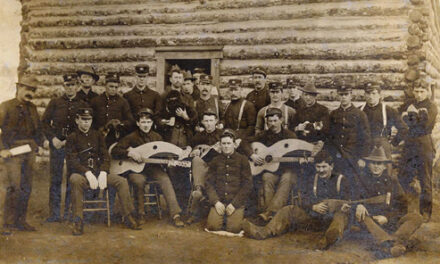 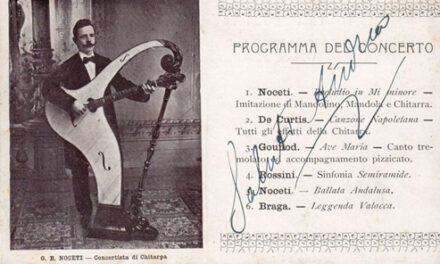