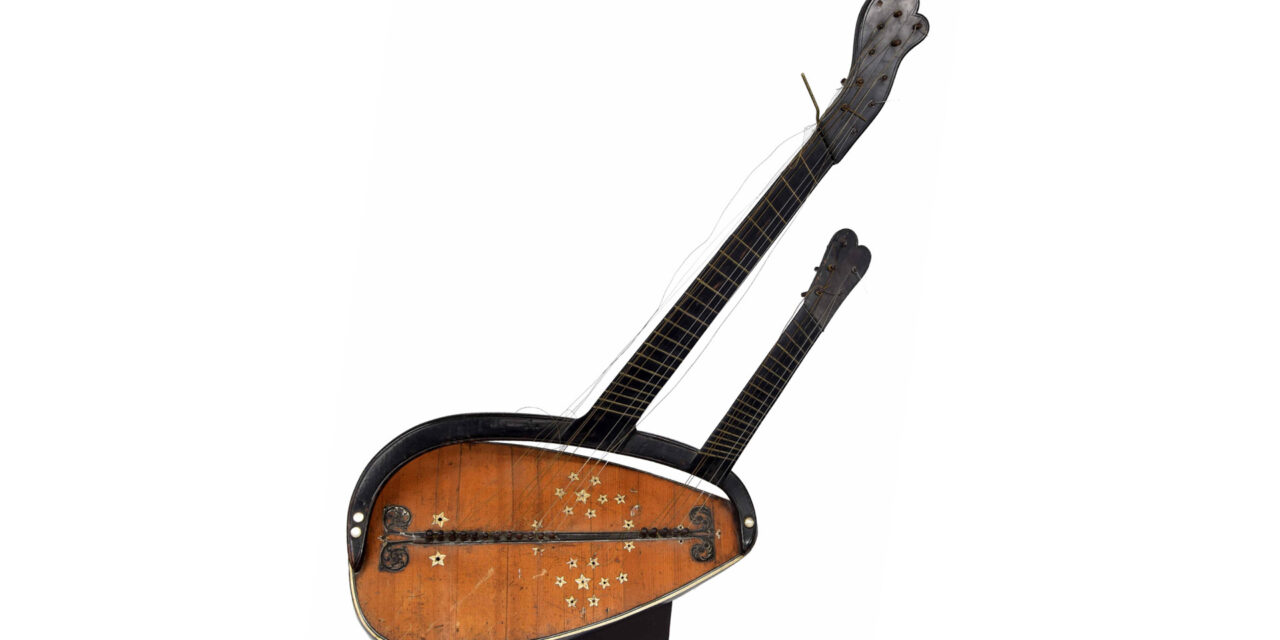 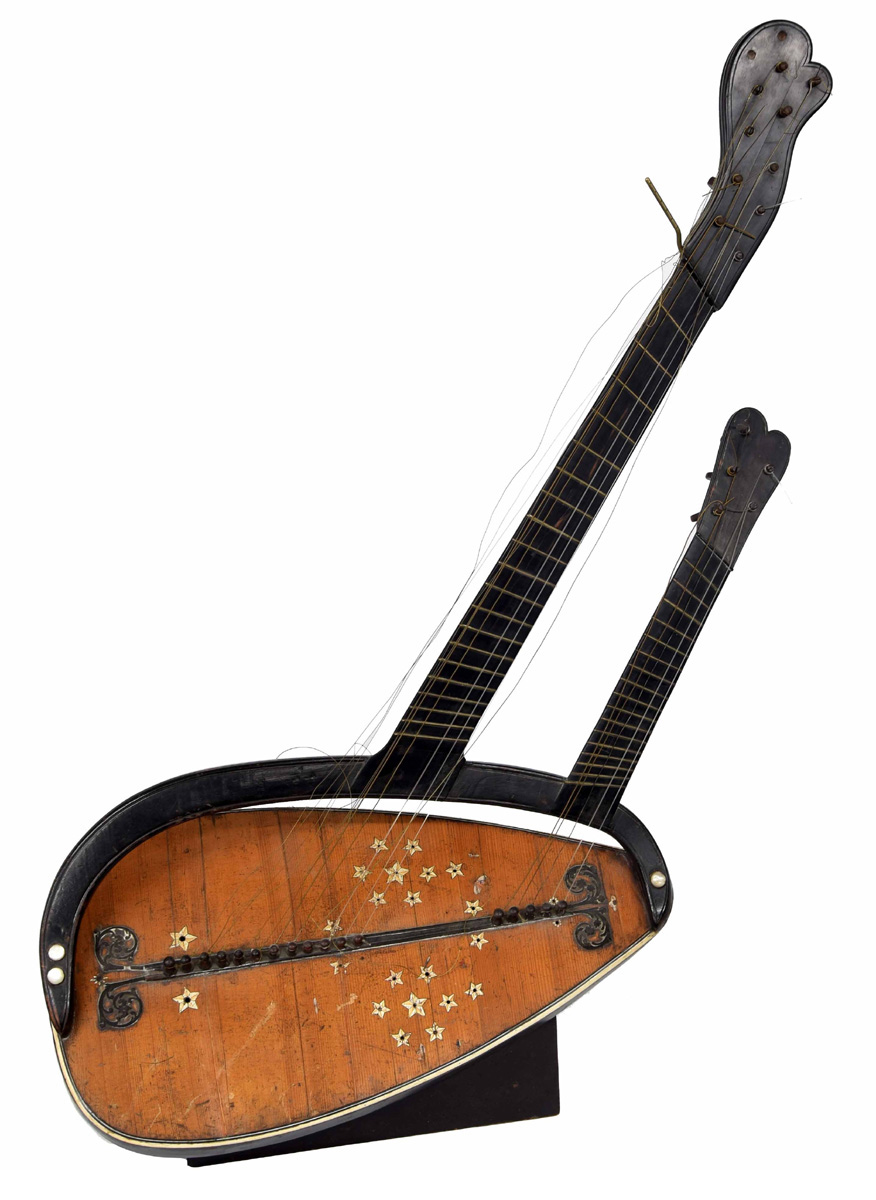 One of the most unusual plucked stringed instruments I think I’ve yet discovered is the mysterious harpekénne made by the luthier Vanderlist in Paris.­ First, I completely missed it when somone auctioned it several years back. It then turned up in another auction (Gardiner-Houlgate) just last month in the exact same condition, and once again I missed it (though I made the winner pay dearly).

It’d be great if the new owner gets around to sharing someday, though these things often seem to disappear into the ether. That would be too bad, as this one warrants some serious study, “novelty” or not! 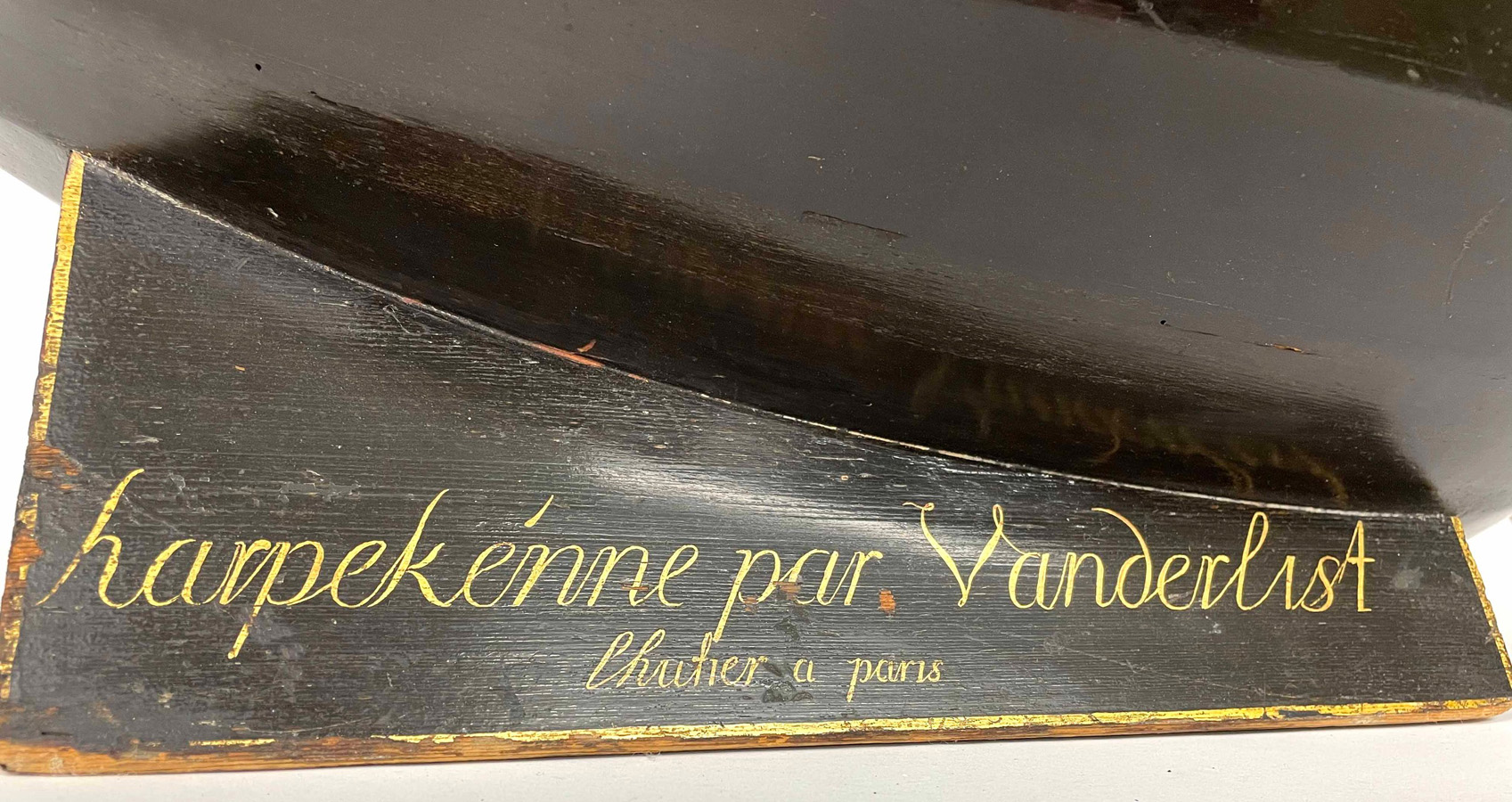 The maker is Vanderlist (thanks to Neil Harrell for locating him in the “Fiddle Fancier’s Guide”), who is said to be an 18th century Paris luthier, so this instrument is earlier than its listed c.1830 date. He was “apparently an excellent workman, judging by a copy of the Guadagnini School which he made.” His address was listed as “Rue des Vieux Augustins, pres de l’egout de la rue Montmarte, Paris.”

My friend Erik Hofmann then did his own further inimitable research and learned that “His first name was Joseph, and the original Flemish name probably ‘van der Elst’ (GM: a Facebook friend Toon Lauwers guessed a contraction of the Dutch “Van der Vlist”). He got married on 30/10/1786 in Paris to one Marie Gabrielle Corroy (I have a copy of the original marriage record). There are several members of the Aubry family present as witnesses, but I would have to ascertain if they have something to do with the dynasty of instrument makers of the same name (it is a current one). He appears in a small number of other official documents in Paris and dies on 13/11/1812, aged 74.”

Those dates, then, help pin the instrument down better, Erik suggesting that it “must be from somewhen between 1800 and 1810. I don’t believe it’s an 18th century work, because of the design of the moustaches, but could be 1795 (maybe).”

“The name “harpekénne” could be a phonetic transcription and in fact mean: “(une) harp qui est né” (par Vanderlist), which literally means “a harp which was born by Vanderlist”, but “born” as synonym of “made” is not unusual at the time. Also, in speaking French “qui est” would be contracted to “qu’est” – and there you have your “kénne”. The fact that he writes “luthier” in a most unusual way (“lhutier”) actually seems to support that idea.” (GM: similarly, Toon Lauwers deduced “kenne” = “knowing,” thus an instrument “acquainted with harps.” 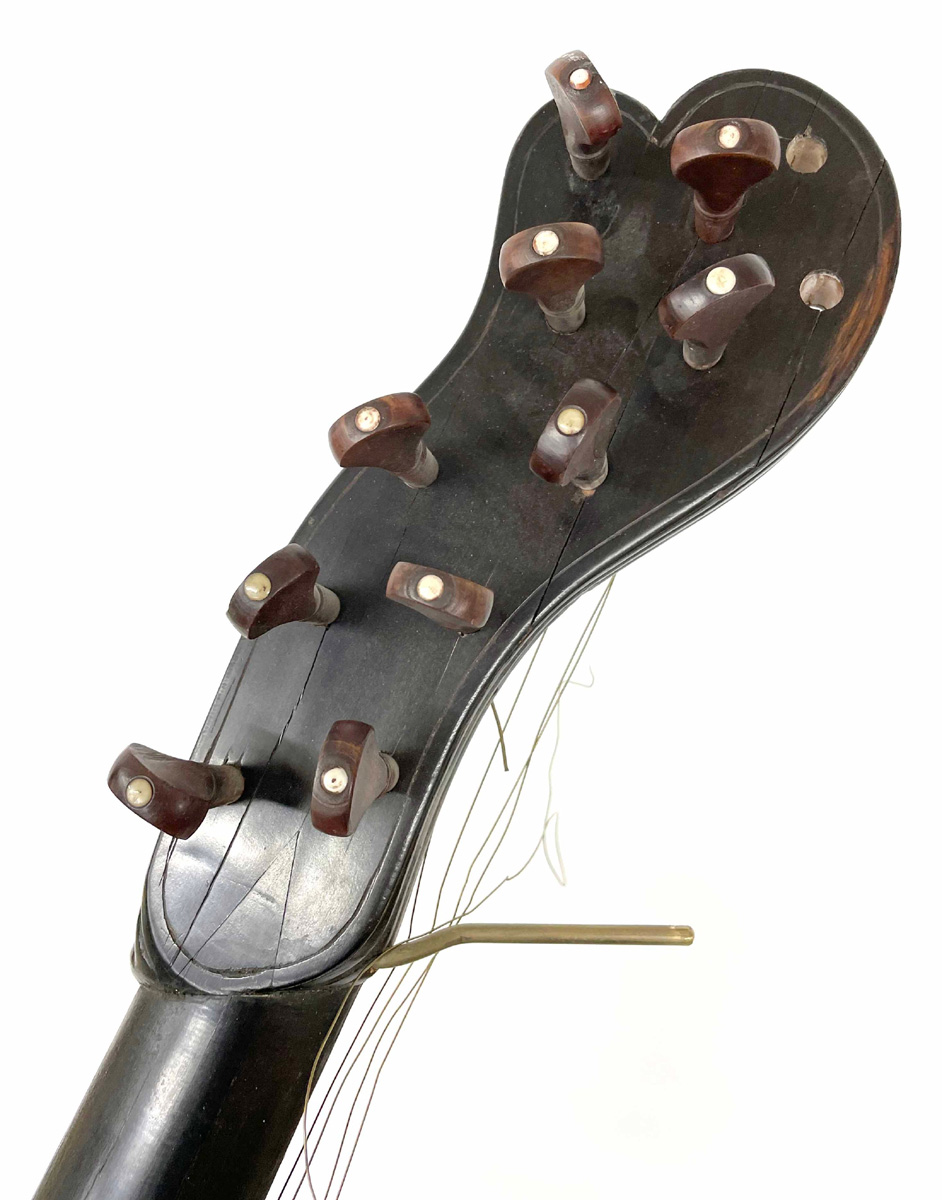 It is a true harp guitar (note the six sub-basses held off on the metal extension nut), but that’s not the point here. It’s the vaguely harp-like geometry and physics of the thing. 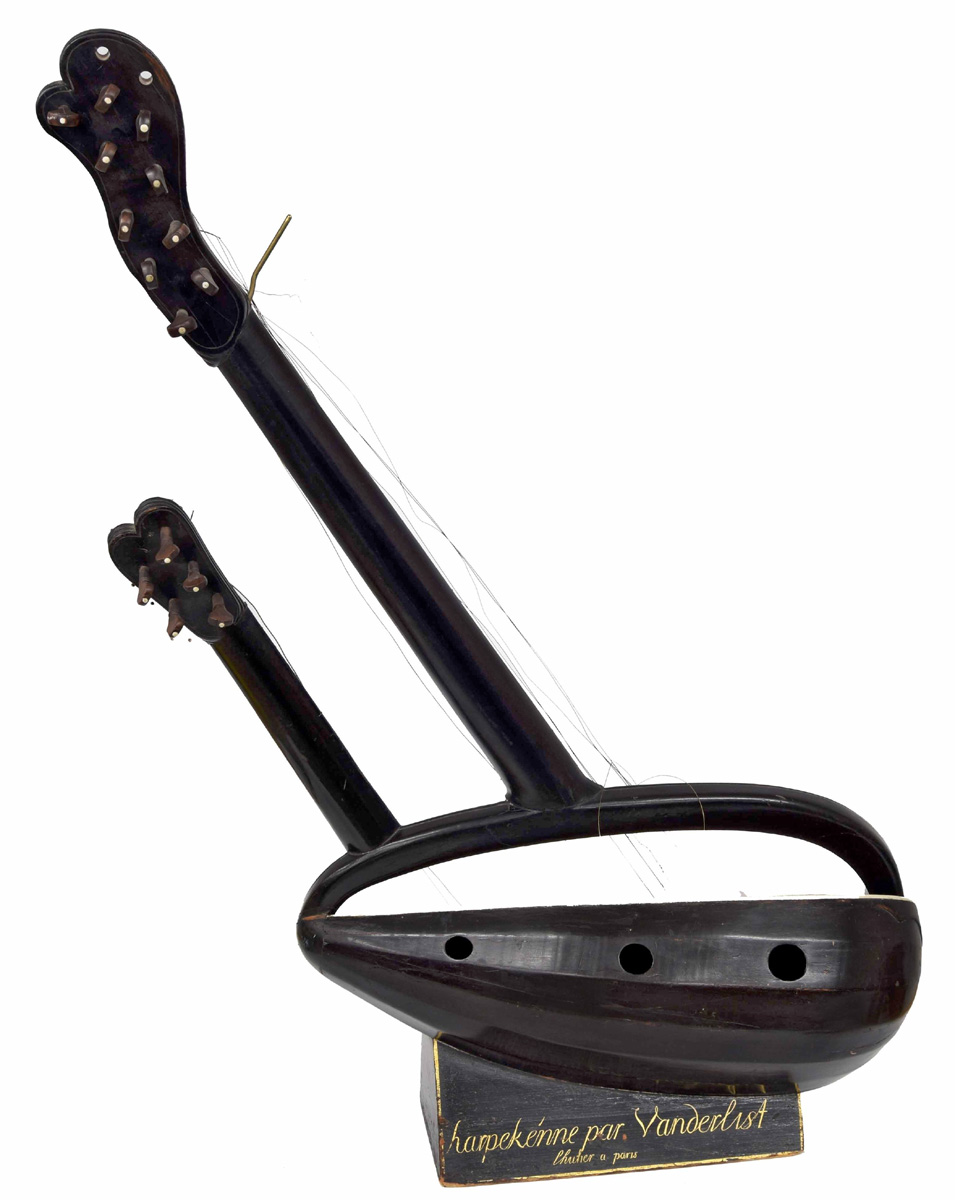 It has a staved lute-bowl type of body (which Erik Hofmann suggests could be a re-purposed hurdy-gurdy body) affixed to the base at steep sideways angle. Mounted to that is an arched brace that forms the “heel” of the two guitar necks – one a harp guitar, the other probably an octave guitar. Crazy, right? 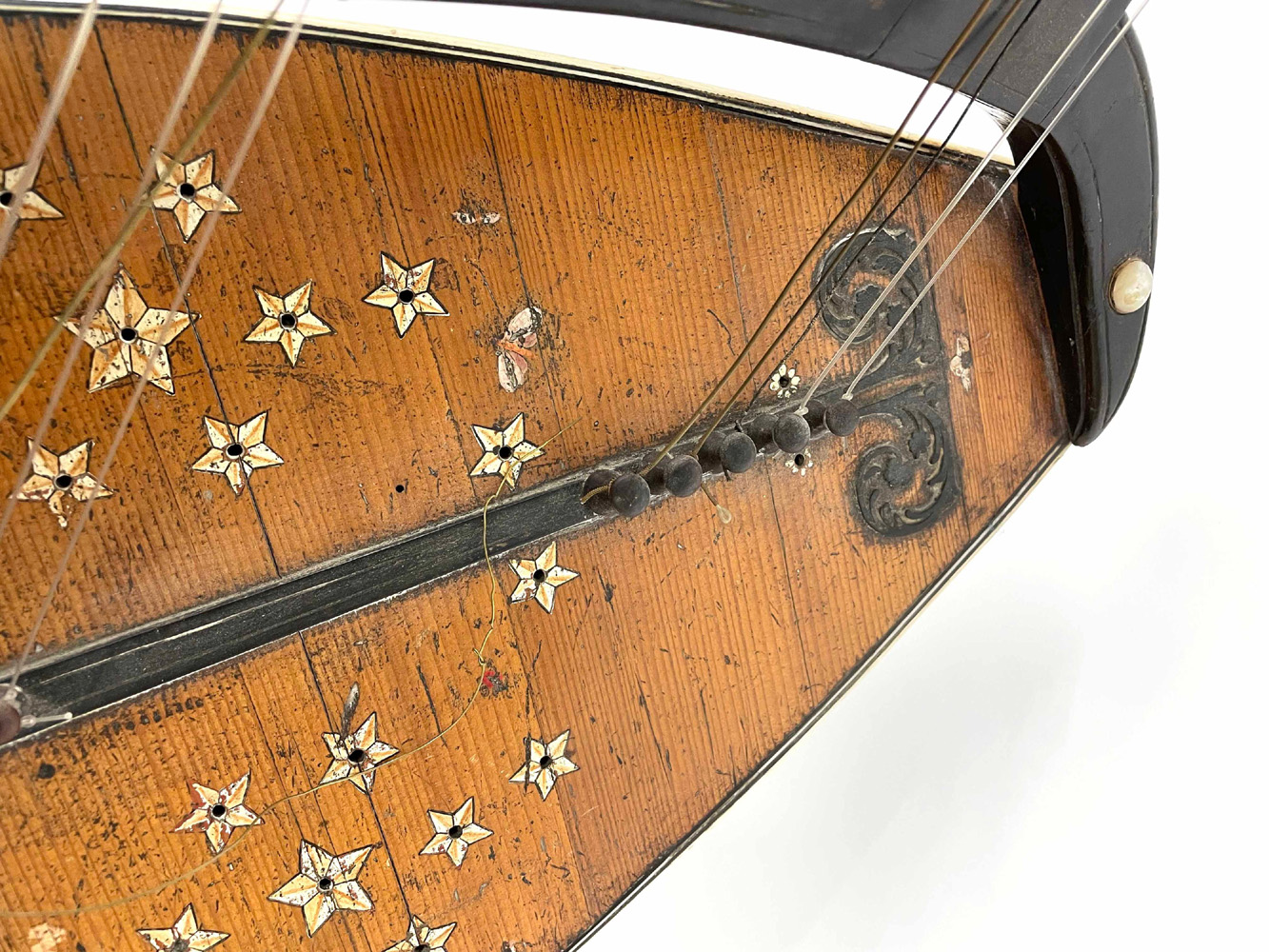 Then we come to the soundboard. Affixed to the elongated lute bowl is a shortened harp soundboard (note the grain direction).

What we’re still missing is the critical side view of this thing. The top is tilted backwards with the bowl at something less than a 45-degree angle, as far as the auction photos can tell us. So, it’s not a guitar soundboard bridge angle, nor a true “true harp guitar” like my Alan Carruth below with its traditional perpendicular harp bass soundboard.

Speaking of the bridge, where is it?

There isn’t one. In fact, there’s no contact point for the strings at the soundboard at all. Those appear to be fixed knobs, not harp soundboard pins. The strings are thus tied around the knob’s waist with the knot forming the contact point, as in a lute. Presumably, when built, Vanderlist had the geometry and intonation all figured out, including the two biased-fret necks! (That because he’s got the strings coming off the soundboard at a wholly unique compound oblique angle!)

Needless to say, this thing has got to get restored and strung up so others can study, play and hear it.

Maybe I’ll get a turn someday in a third auction… 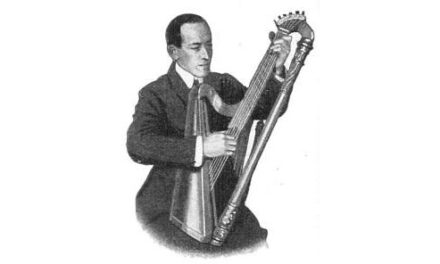 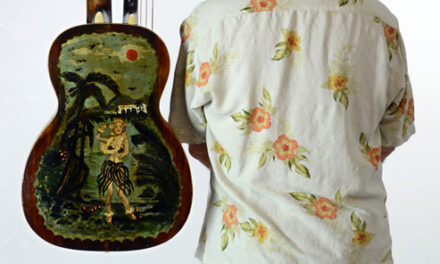 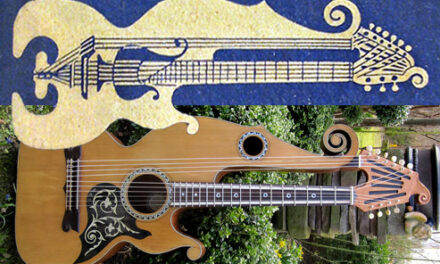 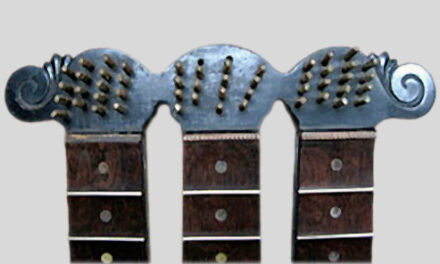