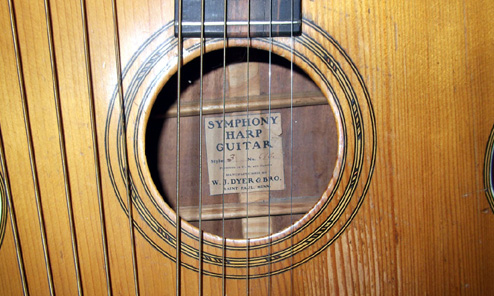 …which is to say, that the sixth specimen of the rare short-scale Style 3 (also “Type 3”) Dyer harp guitar just came to light.

An extra bonus is the nice, clear label: “Style 3” and “No. 610” – which fits right in with the Dyer numbering scheme that continues to coalesce.

Even better is the provenance: No hard evidence, but family lore that puts the instrument squarely where I would predict.  Yes, another original, single-family instrument!  Currently owned (and treasured) by Jim Kempton, it belonged to his grandfather, who “bought it about the time he got married, which was in 1909.”

Note where #610 is placed in the Timeline matrix at the bottom of the Dyer Dating page: In two of the columns (including the last, Timeline D, the scenario I currently favor) it is c.1908 – the perfect construction date one would expect for a Dyer purchase “about 1909.”  I wish the family could be positive, but this is pretty compelling “hearsay” nevertheless!

In other Dyer news, I just listed a cool early Style 7 for sale. 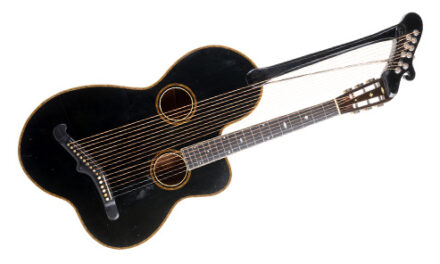