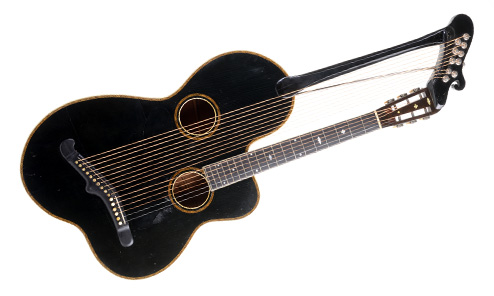 So there I was, halfway through our Italy trip, and just back from three Internet-less days in Milan – when I was finally able to get on Franco’s computer and check emails and a quick eBay update…where I was promptly greeted by this:

What is it?  Only an ultra-rare, one-of-a-kind, c.1915 custom Larson-built harp guitar…with many surprises.  With a hefty opening bid, an unknown reserve, and a closing date that ended after our return, I was (somehow!) able to put it out of mind, to deal with (or not) when I got home…

…when I promptly discovered that the Harpguitars.net Forum was ablaze with gossip about the curious instrument.  Thanks for keeping it quiet, guys!  Bob Hartman was of course all over it, promptly informing the seller that he had, well… (like I said above) “an ultra-rare, one-of-a-kind, c.1915 custom Larson-built harp guitar!”  (Bob, remind me to strangle you next time I see you)  In the end, I don’t think any of that mattered, as the seller, an experienced vintage instrument eBay-er, was pretty aware of its value.  In fact, without knowing what he really had, he had the reserve at pretty much top dollar.

I don’t pretend to understand auction psychology (everyone seems to have a completely different “strategy”), but in the end, no one besides me put in a bid of any kind.  Not even close to the reserve, the listing quietly disappeared, whilst meanwhile all sorts of people made private queries and offers.  I thus had to up my offer in line with the other (alleged) offers.  Bob kindly agreed to let me have first crack (not knowing I was way more broke than he was!).  In the end, I had to sell two recently acquired rare Knutsens to cover it, the most expensive instrument I’ve purchased to date.  The only saving grace was that it was less than the seller’s original pie-in-the-sky reserve, and he agreed to stop the endless haggling and counter-offers (a couple of aggravating weeks worth) and let me have it.

So, why all the fuss?  Well, as the Forum users observed, it was one of the infamous patented Larson “Picasso” harp guitars” (or “goiter guitars,” an old term of mine) with the two offset soundholes and ungainly shape.  This translates into “unusual,” “comical,” or to many, “ugly.”  Clearly, that is just a plus for me! 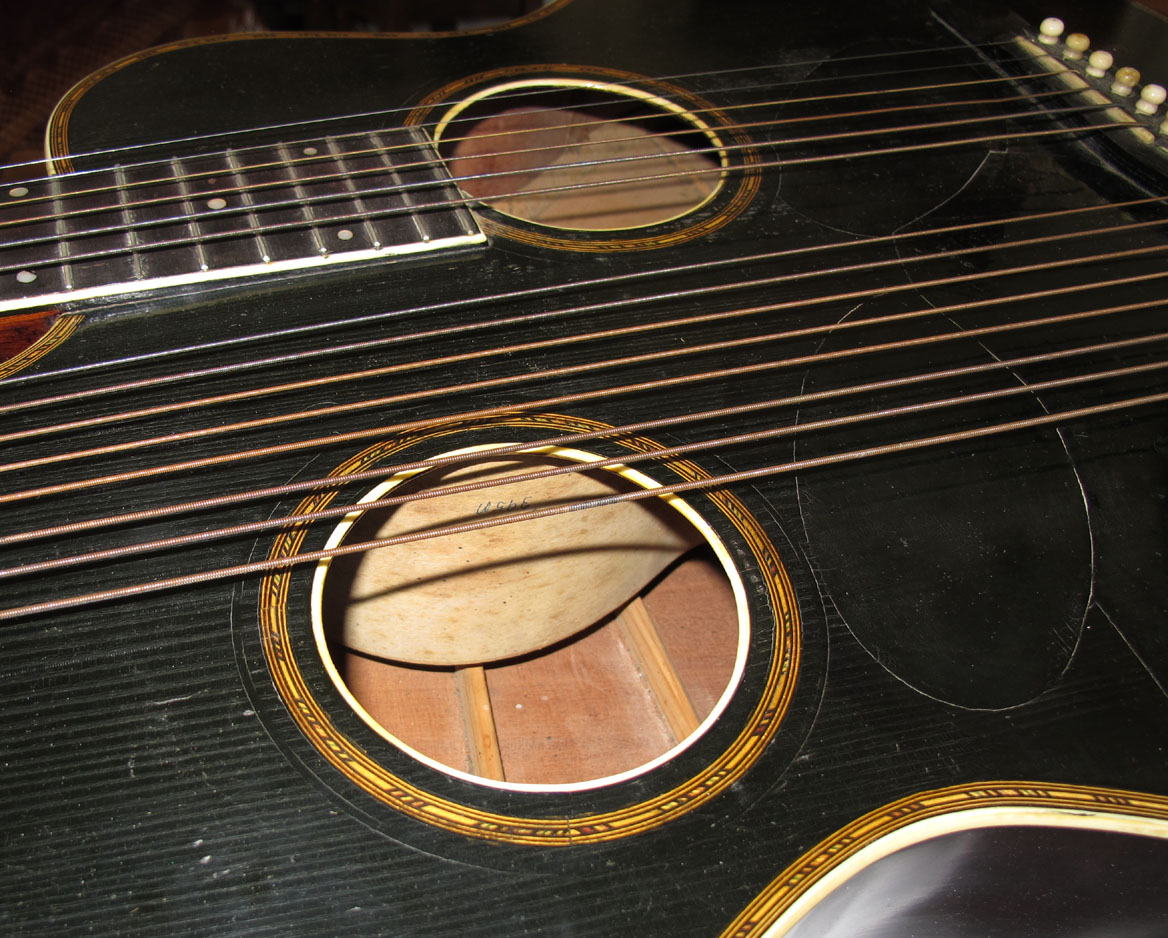 The most noteworthy feature though was the internal second body, which the Forum users finally figured out, but which the seller totally glossed over.  This is a big deal, the crux of the well-known 1912 patent.  Curiously, among the 5 known surviving Maurer/Stahl harp guitars of the double-hole “Picasso” shape (see also “Dumb & Dumber”), none but the hollow-arm specimen have the internal body (which would seem to be the only point of an instrument with otherwise questionable aesthetics)!  This, then (the 6th surviving), would be only the second specimen found with the key feature (if anyone knows differently, please let us know!).  Yes, I briefly owned the other (Bob Hartman>Stacy Hobbs>me>Stacy…long story), and hope to again perhaps – so another reason not to miss this chance.

By the way, John Thomas x-rayed the incredible hollow-arm and presented the images at the 9th Harp Guitar Gathering. I’m waiting for him to publish an article about it before I post the rest of the surprising images.

The other interesting, one-of-a-kind feature was the totally custom design, like none of the others.  As Bob and I both noted, some customer had obviously requested a Larson patent harp guitar built to echo the early ‘teens Gibson harp guitar – including the exaggerated shape, the long bass head extension with wooden support and metal tension rod, and the ten sub-basses.  The final touch was of course the striking black top, something very rare for the Larsons (the back and sides are typical mahogany). 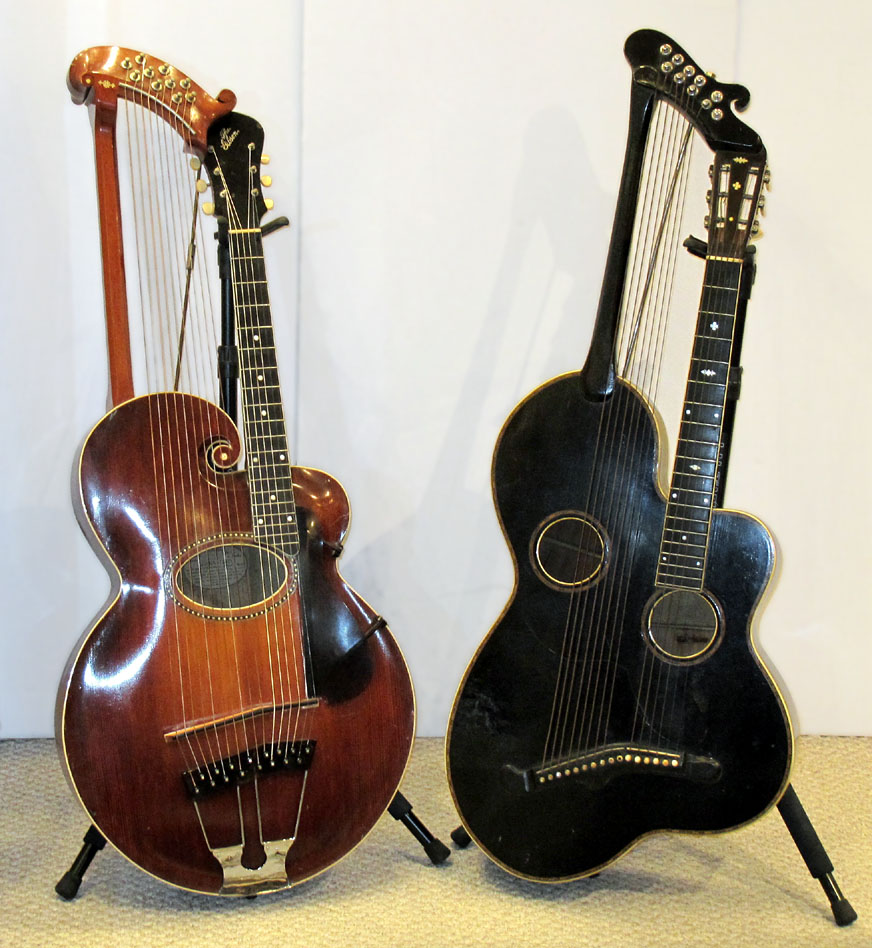 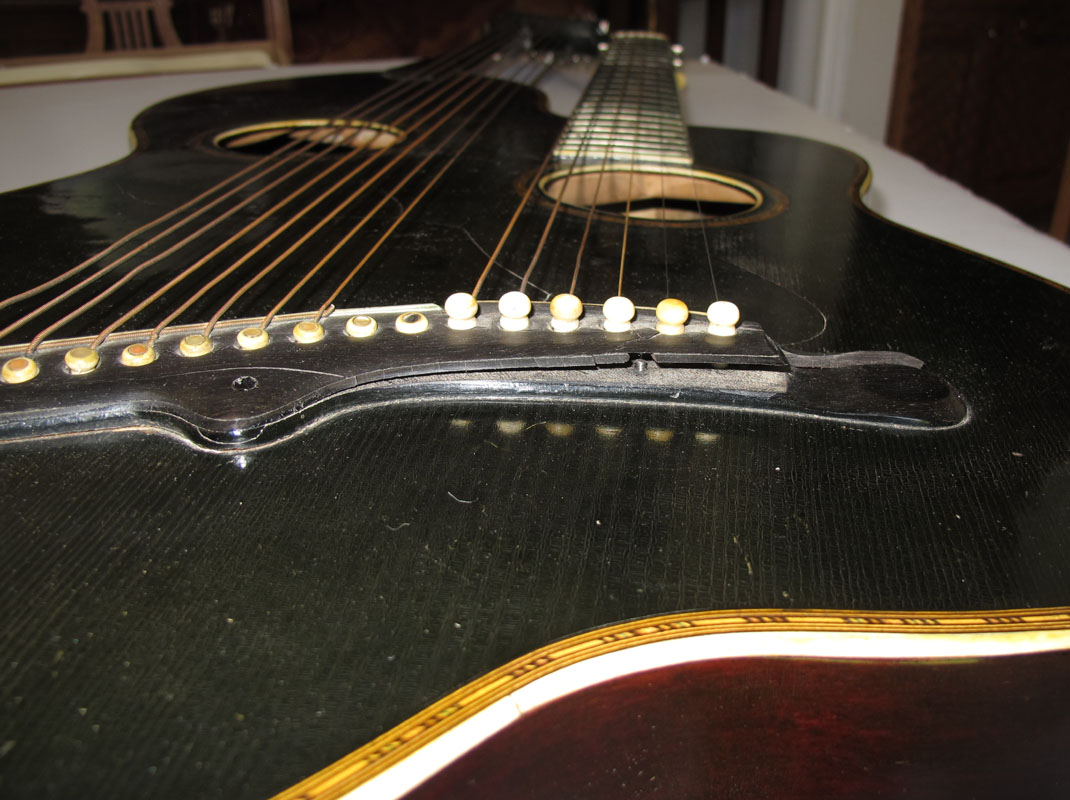 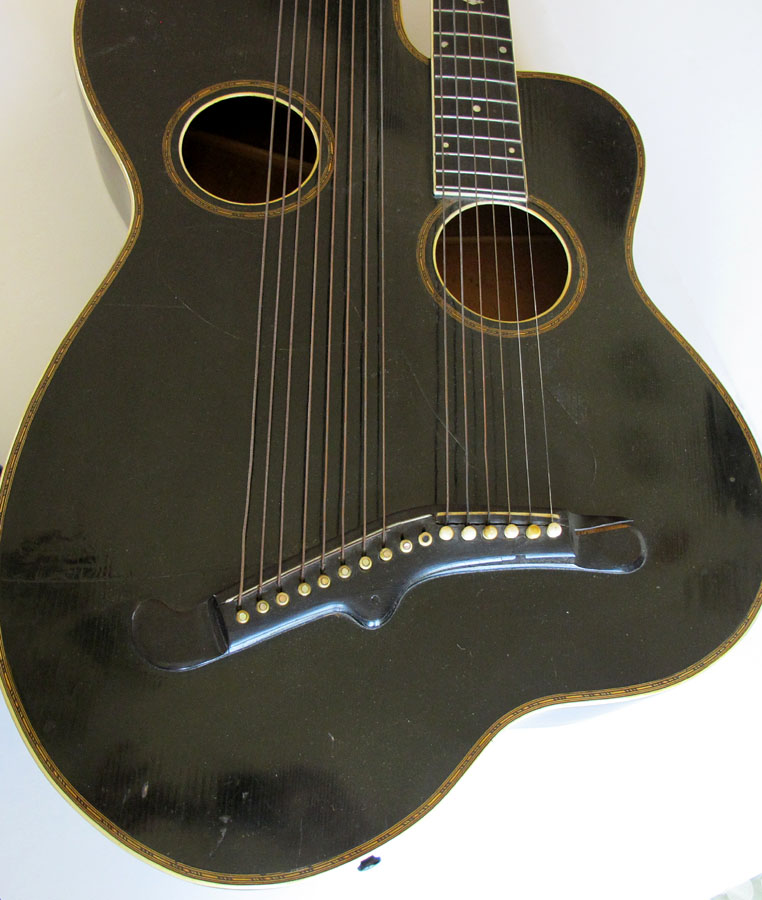 Really?  Yes.  I was initially on the fence about it, as I was put off by the strange pieces of large, thin black plastic(?) “pickguards” inlaid into the top, covering much of its surface.  Three total, with two slightly overlapping.  It actually looks fine in person, with a good color match (shot in natural light at left; in the 2nd photo above, a flash illuminates the edges).  Querying Bob about this curious feature, he told me of another Stahl guitar (6-string) with the same black top and large plastic piece inlaid into it.  When the owner removed it, the spruce top was naturally thinner in that area, and promptly imploded.

I won’t make the same mistake!