Dyer 8 x 2: Cataloging the Most Coveted of Harp Guitars 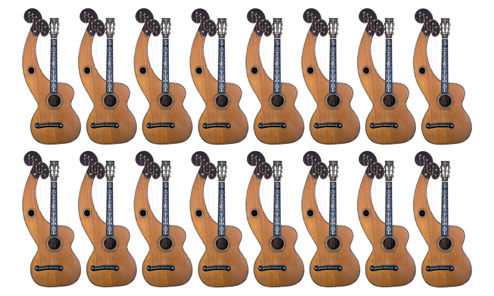 …in which I get us up-to-date on the continuing saga of all the known surviving Dyer Style 8 harp guitars – an instrument that arguably remains the most coveted vintage harp guitar of all time.

And “8 x 2”?  That’s a double meaning in my cryptic mathematical blog title:  Having just listed for sale a newly-discovered Dyer Style 8 harp guitar, and going through the records, I discovered that there are now exactly 16 confirmed Style 8’s in existence.  I also observed (not for the first time) that the discoveries seem to occur – inexplicably, and often – in twos.

This latter observation is statistically curious…this is the fourth time (!)  that I’ve noticed Dyer Style 8 harp guitars popping up (or changing hands) in pairs.  Not in the same place, of course…it’s just that when one surfaces, another seems to immediately follow.  Which is pretty remarkable, considering how darn rare they are.

How rare?  Well, back in 2005, when Bob Hartman first shared with me his Dyer serial number list, there were exactly ten Style 8’s known – eight serialized, plus two with no number (much later, one of the two missing numbers was uncovered).  It seems keeping track was and is not as easy as you’d think!

We now share the slowly growing list of those with serial numbers, whose numbers appear on my Dyer Dating page.  The styles, owners (including when they change hands) and other details are kept in a private list Bob and I maintain.  Unfortunately, we don’t (and can’t) keep track of the count of Dyers with missing or illegible labels; we only know there are a lot out there – though probably not quite as many as those with numbers.

Sadly, I was not remotely in the Dyer loop until the last dozen years. For the record: I got my first from Norm’s Guitars in Tarzana (the original location, which appeared in “Spinal Tap”) – a Style 4 with finish so “alligatored,” it looked and felt like leather.  At $2000 in the early ’90s, this was probably overpriced.  I don’t believe it had a label.  A year later, I traded it in to Gruhn Guitars for a National Tricone, after buying from Gruhn my Style 8 (#690, seen above), which, astounding even for back then, was a ridiculous steal at $4000 (!).  It’s the one in the Gruhn/Carter Acoustic Guitars and Other Fretted Instruments book (though credited to the Gruhn store, it was actually on consignment, having been restored by Gruhn’s shop).  As with everything back then, this was put on my VISA, paid off when I’d auction off one of my cherished Disney animation cels (to this day, when I play the Dyer, I can see Snow White at the window with the forest animals…).

But enough about me and my run-on parentheticals…

Meanwhile, I had discovered the first (really the 2nd) Larson book by Bob Hartman, and eventually started the Knutsen Archives, which necessitated having to learn a lot more about those pesky Larson-built Dyers (heck, unserialized, undocumented Knutsens were easier to date!).  Bob eventually shared his private Style/Serial # list, at which time I started to get involved.

Of course, Bob would always manage to locate and sell Dyer harp guitars that I was not privy to (the bum!).  It was Bob who sold the late Scott Chinery his Style 8 (#809), which I believe is one of the very few kept by Chinery’s widow.  And who knows how many others.

The next Style 8 that I personally saw appear on the market (after my Gruhn specimen) was on the late Bill Camp’s Banjo site, where it sat at $35,000 for several years (over-priced, at the time).

And here is where my “8’s always seem to come in 2’s” pattern started. 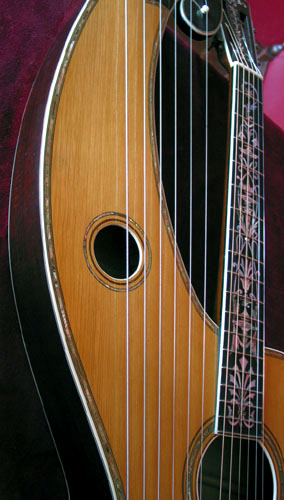 In late 2006, Bill Camp’s son finally accepted an offer on the 8, sold to a Larson collector in Las Vegas.  Meanwhile, Style 8 #264 was finally hitting the market – but privately – and I had first crack at it.  This one (at left) is interesting: It was sold by Mandolin Brothers in 1973(!) and was in fantastic shape.  More importantly, it was unusual in having an extremely shallow body depth of just over 3-1/4 inches (others generally hover around 4”).  Alas, though I could have brokered it for a perfectly reasonable (then) “market value,” my buyer kept trying to low-ball, until finally, I heard that the Las Vegas collector had somehow found out about it, immediately snagging it with a substantially higher (then-record-setting) offer.  So, in less than six months, the only two available Style 8s came off the market.

Would we ever see another specimen?

Actually, yes…two more, in fact.  In 2007 and 2008 (a year apart), numbers 839 and 863 came to my attention through my web site(s), from two private owners curious about value and insuring.  Not interested in selling, as far as I know they both remain with their owners.

But would we see another one hit the market any time soon?

Things were definitely quiet – for two and a half years – when suddenly, two new specimens turned up simultaneously in the month of September, 2010! 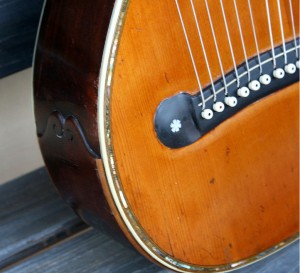 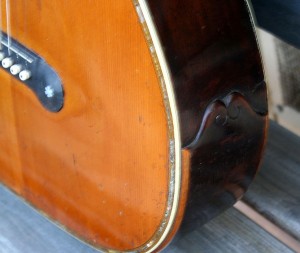 #691 (the serial number directly after my own Style 8) had been restored by Dexter Johnson and was being shopped by Tall Toad Music in Petaluma, CA (with David Grisman as “silent co-investor”).  This is the one with the mysterious “sidewalls” that I blogged about here.  I last saw it for sale at Intermountain Guitar & Banjo (current whereabouts unknown).

#789 – which I sold on Harp Guitar Music within 3 days – came from a couple who had put it in a closet to keep it safe, only to have something fall off the shelf above and knock a big hole in the arm (D’oh!).  Luckily, the piece was still there, and the buyer (a collector/player/investor in Florida) talked Kathy Wingert into doing the critical restoration (I didn’t get to see it, but hear the old arm accident is now near-invisible!).

Well, another 2-1/2 years rolled by…when, again – just when I was despairing that the Style 8 might have to be upgraded from “endangered” to “extinct” – another two turned up!

The first was when the owner ordered strings from me, and it developed that her harp guitar was Dyer Style 8 #769.  This one, too, will remain with the family.

The final, sixteenth-known Dyer Style 8 came out of the woodwork just a couple weeks after 769.  It took some time to hook up with the owners, but I finally snagged #749 for consignment (it’s for sale here).

A few more interesting Style 8 tidbits: It’s certainly interesting to note that all but one of the known serialized specimens were built after the 600-series transition (my current vote on guessimating the time frame of this transition is c.1908).  The single unlabelled specimen from Bob’s early books (at right) was probably a rare early one, as it has only five sub-basses (they soon switched to six, though 5 may have always been a custom order option).  Another clue that it’s an early one is that, strangely, it has the simpler Style 7 type headstock inlay. 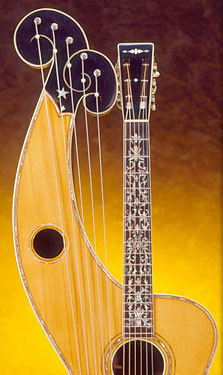 Just one other Style 8 has this simpler headplate inlay – the latest Style 8 known, #913 (Interestingly, it also reverts back to only 5 sub-basses).  This one, owned by Hank Risan (and seen in Bob’s last book), additionally has a “prototype” vine neck inlay.  Prototype meaning that it was the first time this pattern was seen on a Larson-built guitar; it would later be seen in a c.1932 Maurer/Prairie State catalog.  It may have been the last time it was seen on a Dyer, as this is towards the end of our current serial number series.  Circa date?  No way to know – theoretically, this instrument could have been built anywhere between the late ‘teens and the late ‘twenties.  However (as you’ve already read in my billion-word Dyer Dating article), I think that Dyers – at least new orders – went the way of the Dodo somewhere around 1920. 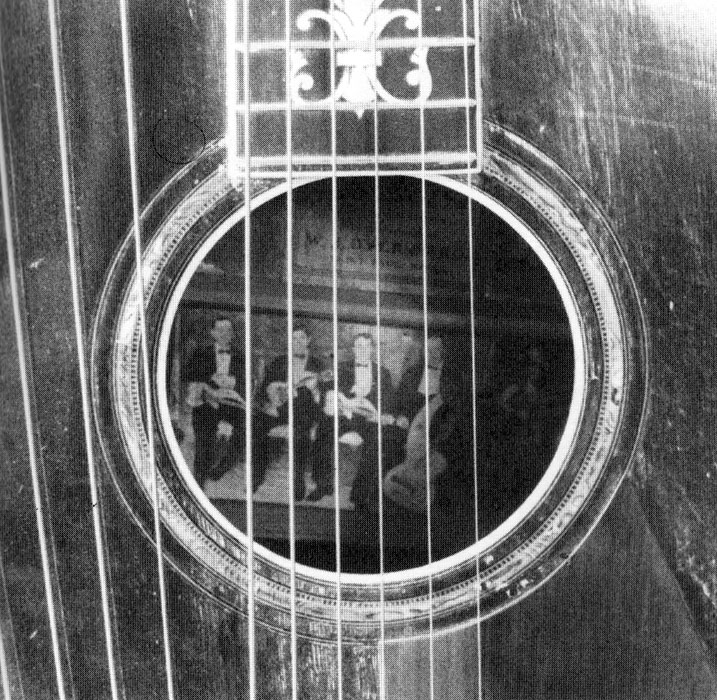 Of course, my favorite Style 8 mystery remains #843, which may or may not be the infamous “Valentino Dyer.”  This unusual dark-stained Dyer appeared in Bob’s second book, though the serial number was not recorded or added to our list until recently.  I was always intrigued by its special, second “photo label” until I realized that the original owner likely just cut the image out of their November, 1910 Cadenza magazine issue and pasted it in there because they thought it looked cool.

OK, I think that gets me – and you – up to date on the Style 8 Dyer harp guitar saga…

…until the next two show up! 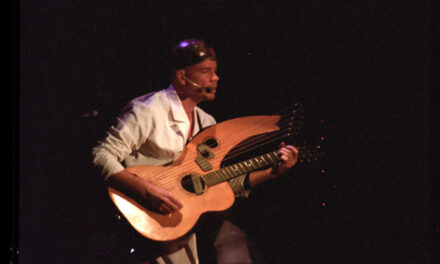 The Legend of Michael Hedges’ Dyer Harp Guitar and the 5-to-6-and-Back-Again-Subs! 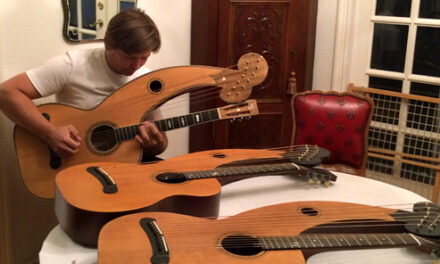 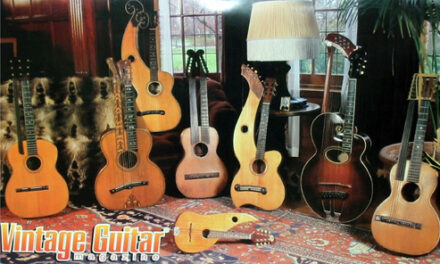 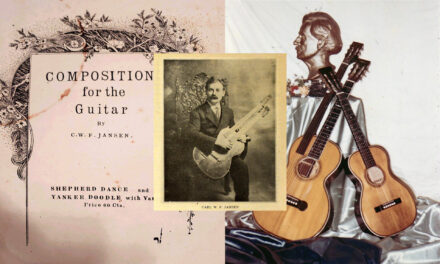