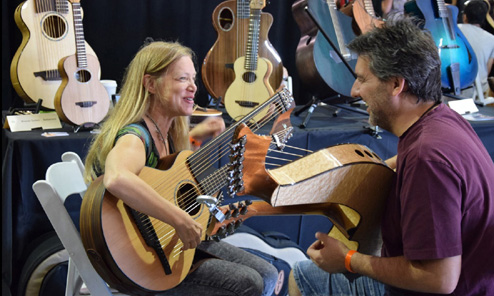 I’ll let others report on the event from their own perspectives – I’m sure there’ll be lot of forum chatter about the pros and cons.  My hat’s off to the guy just for having the guts to try.  Compared to our own Harp Guitar Gathering (which is plenty work enough, thank you), it was obviously a monumental job, and there was a lot of conversation, music and fun.

I had planned to go up just to check it out and then play a quick 20-minute demo for Duane Noble (which I never got to do, due to that demo stage running behind – could’ve definitely used a host there).   Then when Ken Bonfield had to drop out of leading some sort of “harp guitar workshop,” I stepped in wrangle that.  Luckily, all my harp guitar friends volunteered to help out!  (With photos also – pics herein are by me, Michel, Claude, Luke, Kathy, Jim, and the Powells)

Getting up there about 10:30 Saturday morning, I soon got lost in the main luthier building, which had the feel of a giant circus tent – a 3-ring circus, actually, laid out concentrically, with spokes in the wheel every so often as radial aisleways.  It was fun but surprisingly disorienting, rendering one’s internal compass useless. 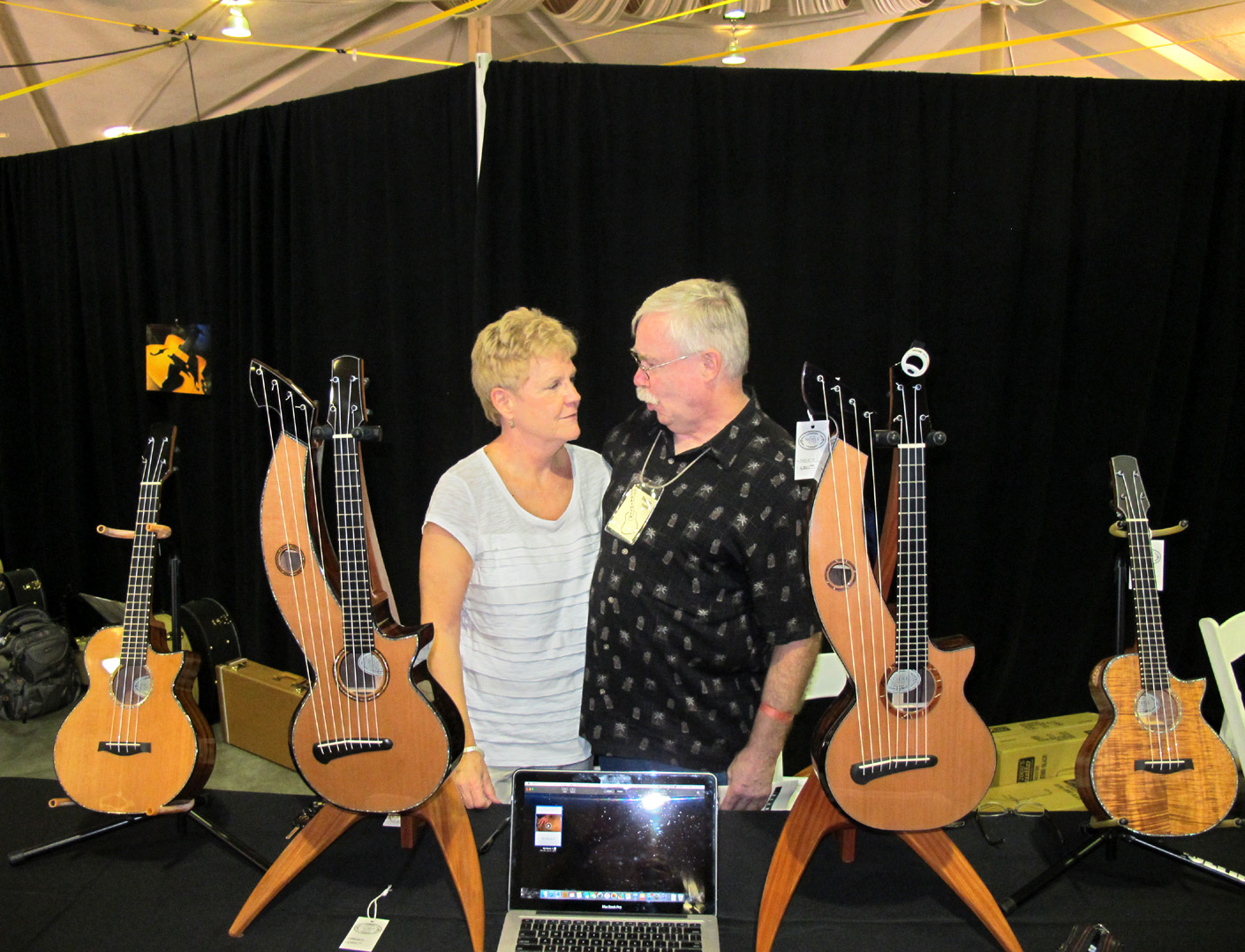 Lolly & Duane Noble at his table of ukuleles and harp-ukes 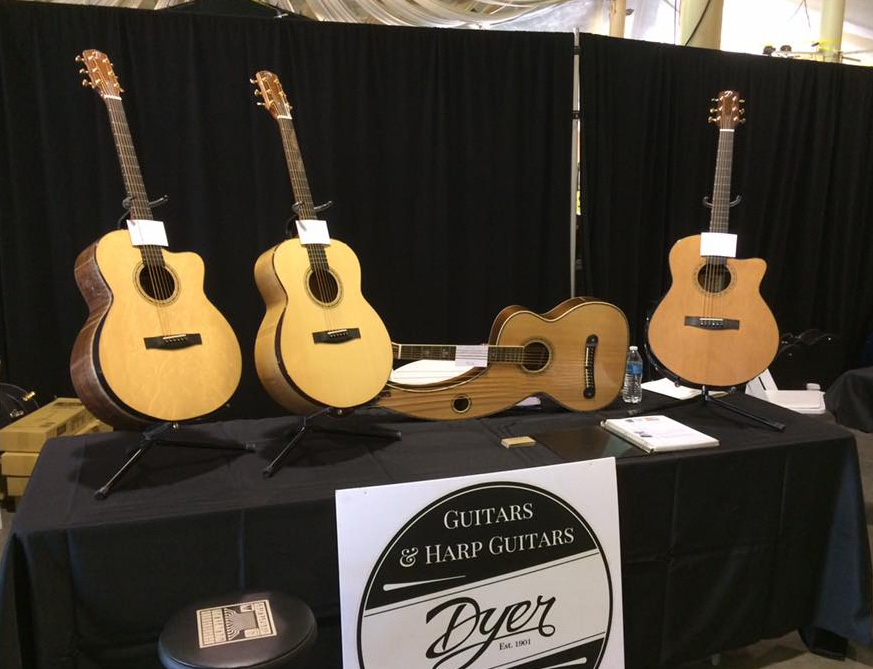 It took me forever to find Duane’s table, and after once stumbling onto Jim Worland’s Dyer table (at right), I never found myself there again.

Of course, you’re stopping every few feet to say hi to someone that you know or knows you.  That was the best thing about the show for sure – running into old friends and making new ones.  Guitar people really are a decent bunch (and harp guitar folks even more so). 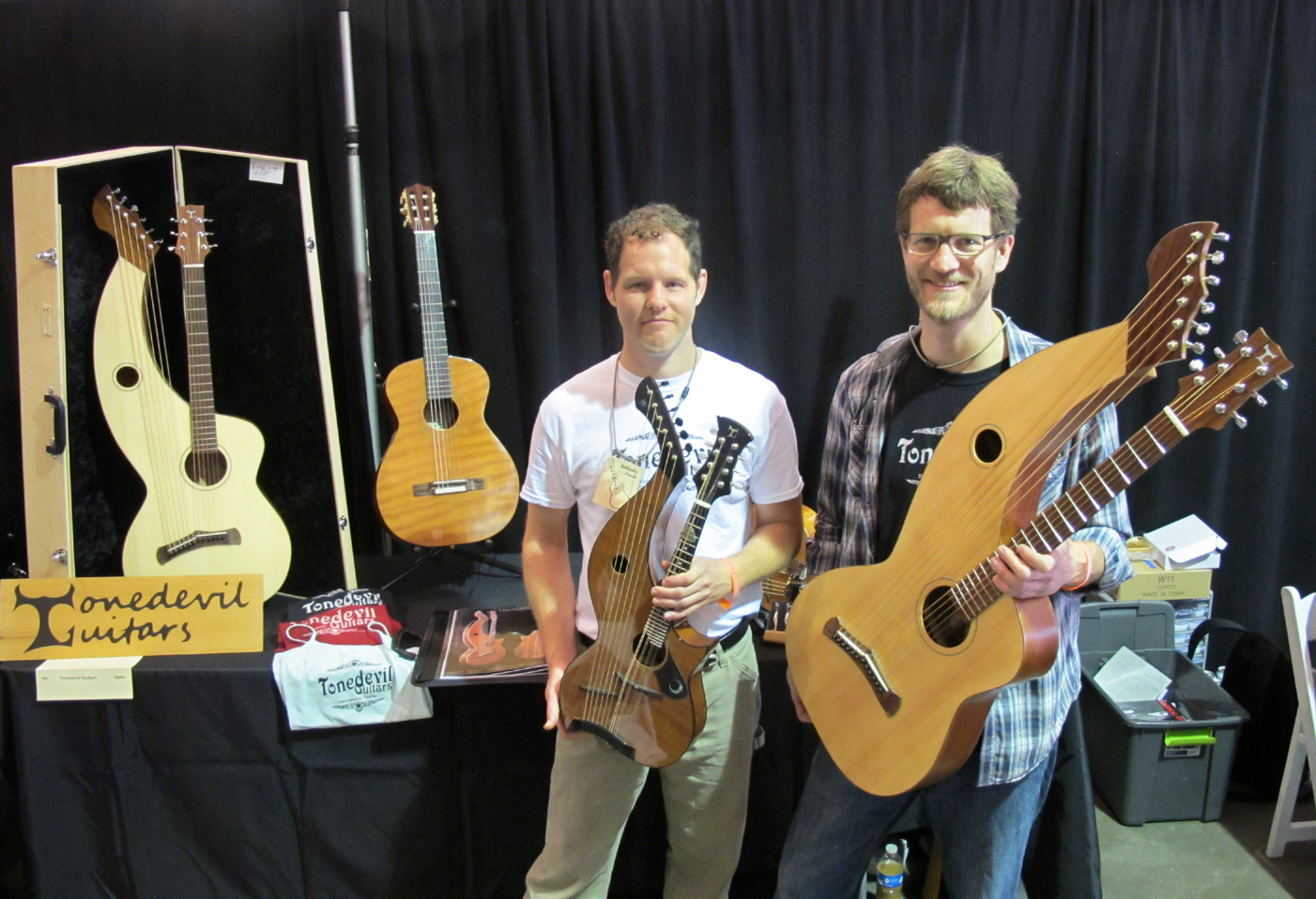 I was proud to see the Powell brothers, Anthony (“Tone”) and Dave, at their first guitar show.  Their full line of harp guitars and harp-mandos got a lot of attention. 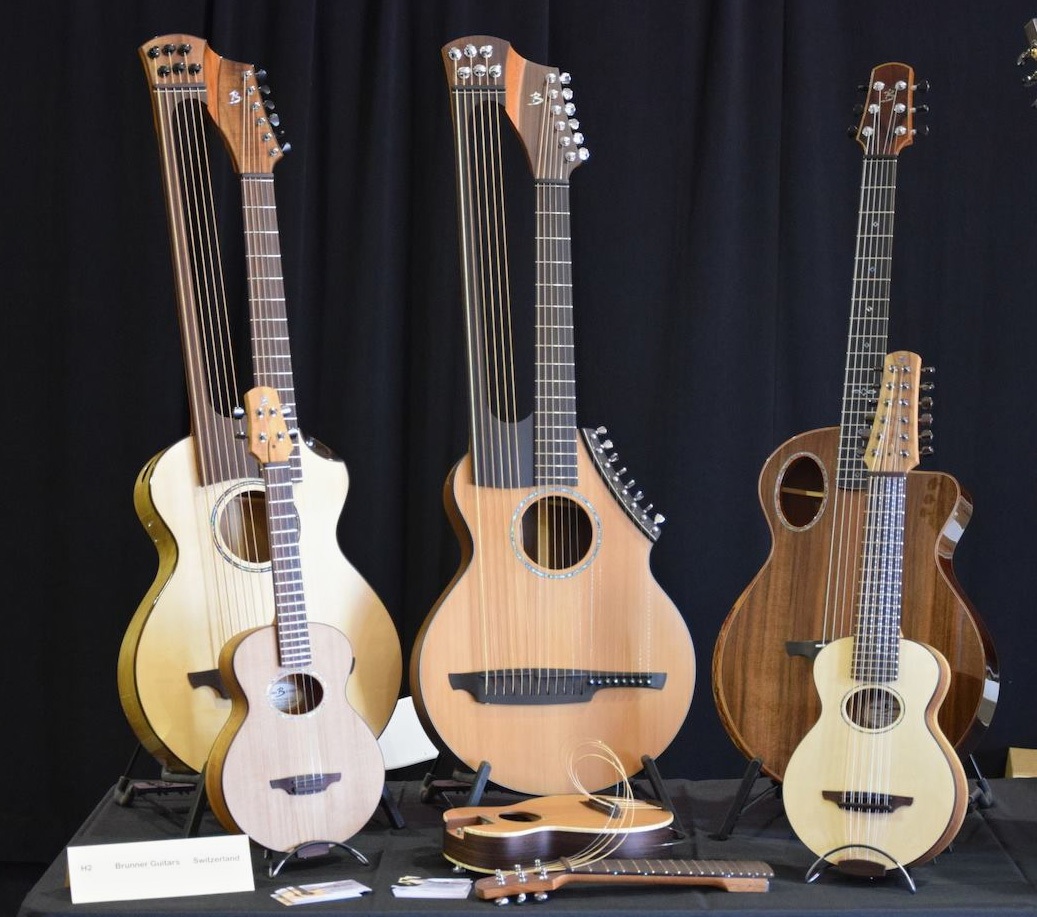 Luke Brunner had come from the Swiss Alps with a half dozen removable-neck instruments, including his latest harp guitar models.  The uke and octave guitar were new, and small as they are, they become smaller still…forget the overhead, these go in the seat pocket in front of you! 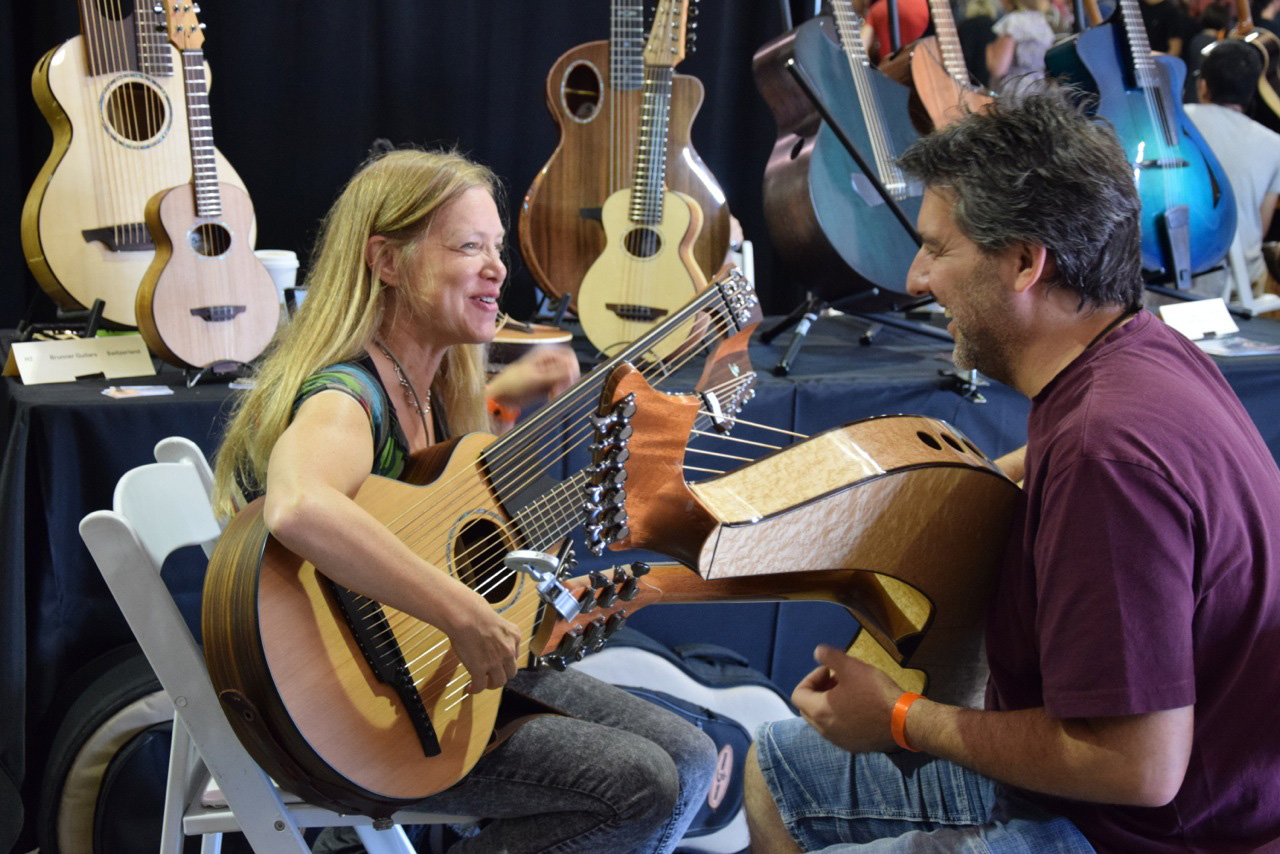 Within moments, Muriel Anderson had strolled up, followed shortly by Claude Laflamme.  Apparently, Muriel has now ordered her own personal instrument like the one she is holding (after the video of her playing it at his house earned a couple million views, how could she not?). 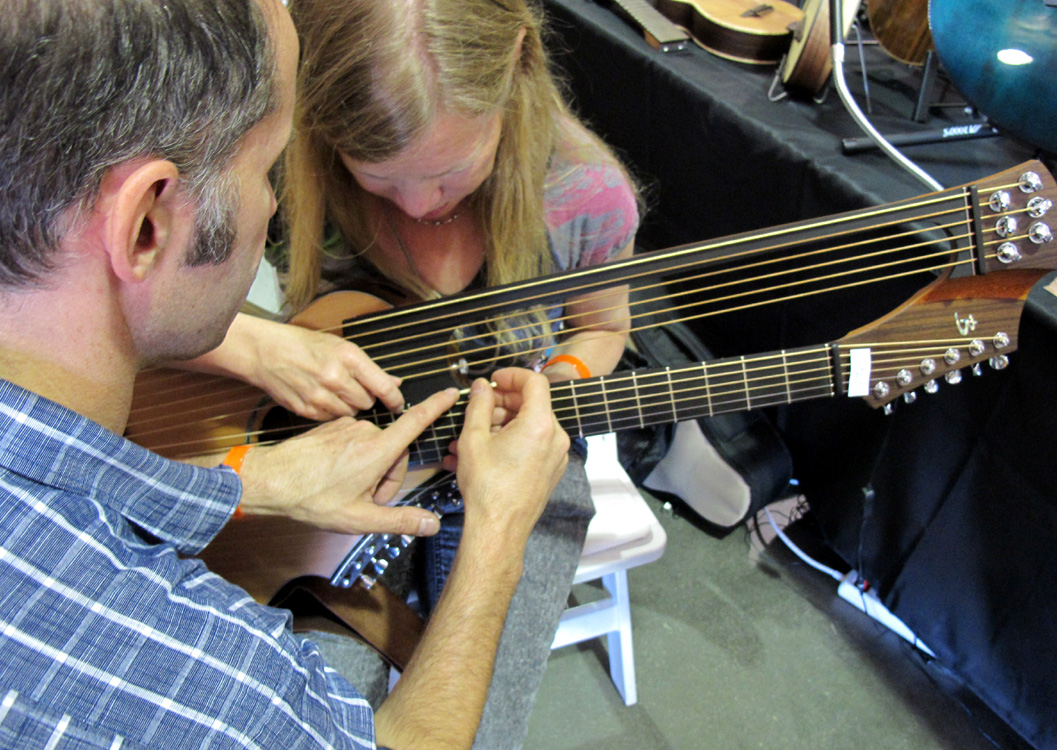 I was cracking up because, like me, Muriel needs a 12th fret marker, so Luke had to quickly paint one on so she could play this in the show.  Hey, you two – is this what will make it the custom “Muriel model”? 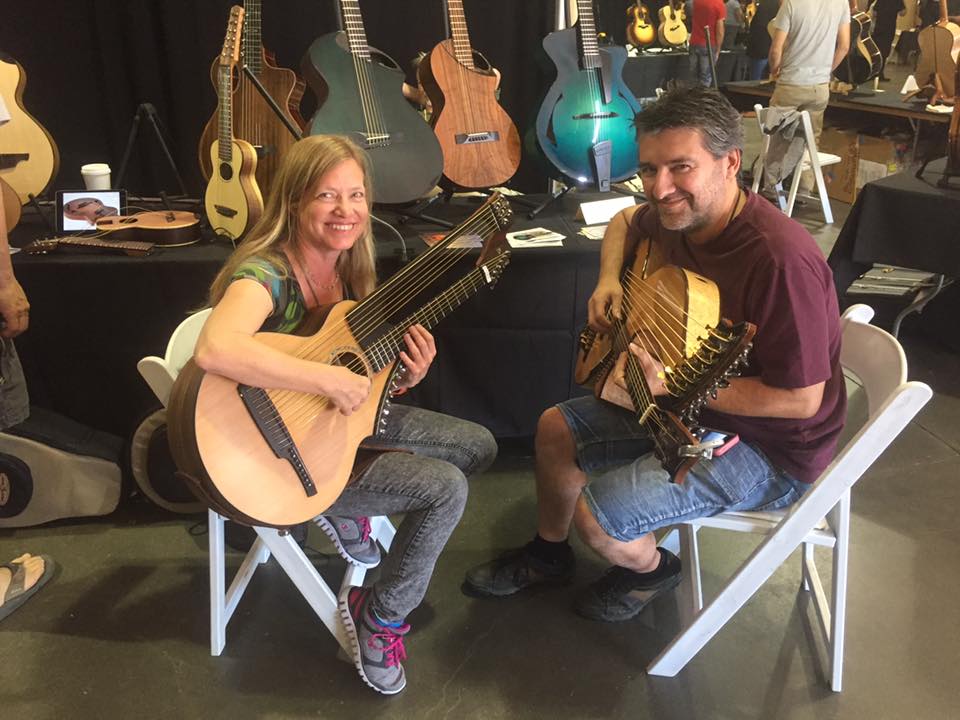 Claude, naturally, has his latest Pellerin 21-string.  I took this with his cell phone. 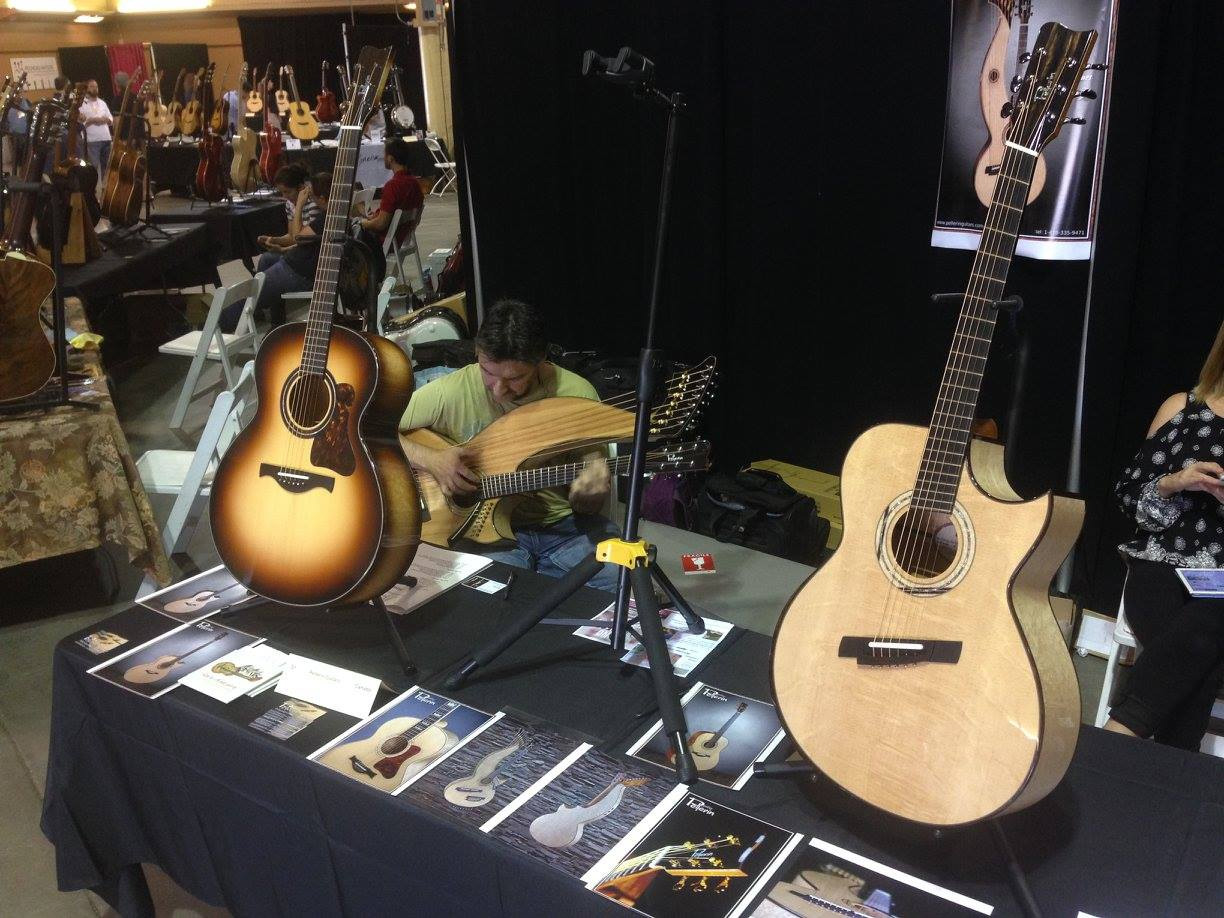 Michel Pellerin’s table was in the row behind.  Michel had 2 new 6-strings and Claude’s harp guitar. 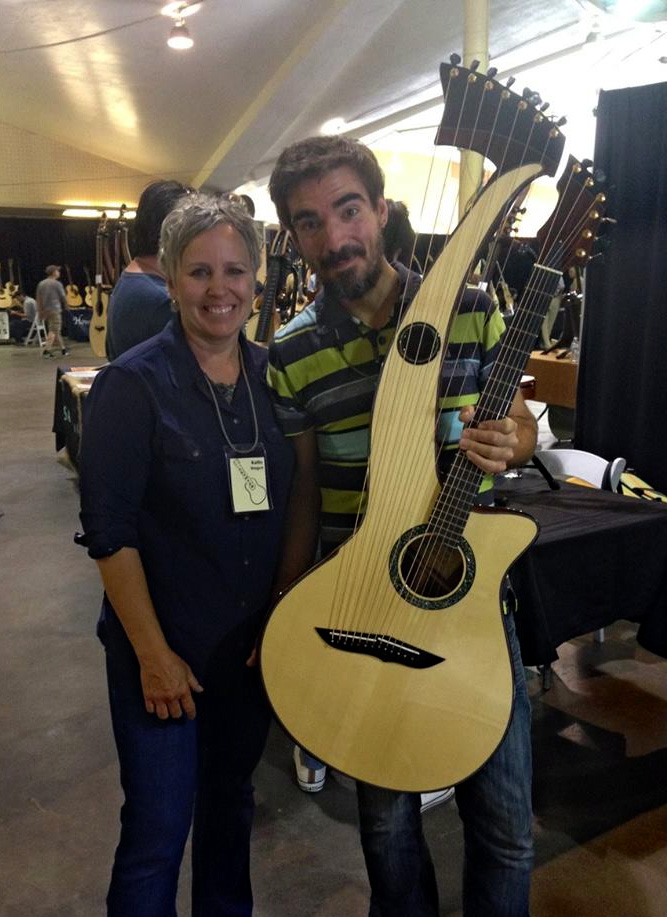 Here’s Michel with one of his idols, Kathy Wingert.  If you check her Facebook, you’ll read about the drama of her just-finished harp guitar.  Typical of her, another couple all-nighters with the thing just getting strings the morning of the show.  She never misses a deadline. 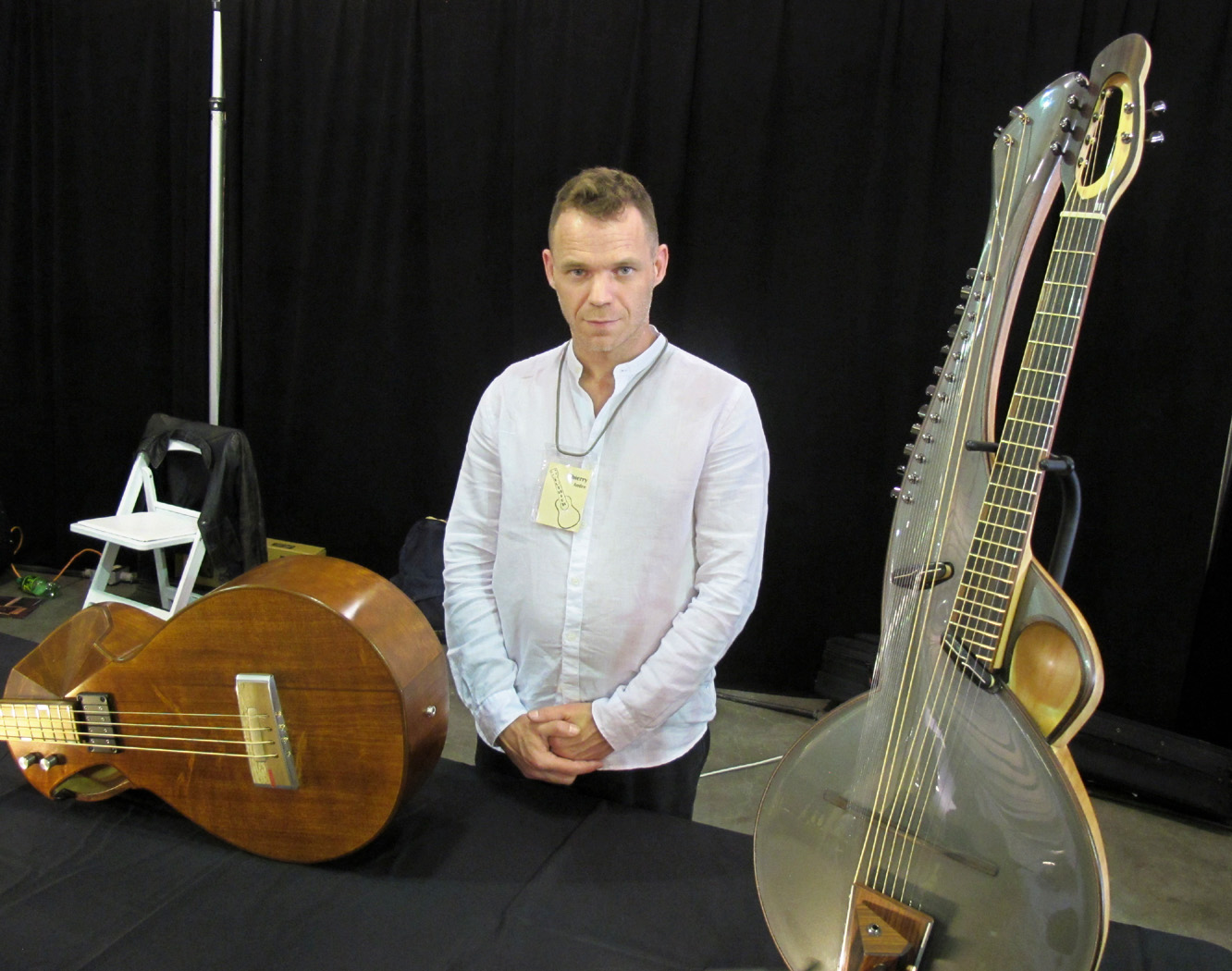 This is Thierry Andre from Quebec, who’s built a couple of very original instruments that I’ve blogged about in the past.

This is the second one of these fascinating sculptural, carved harp guitars he’s made.  It has two subs and twelve closely-spaced sympathetic/plucking strings.  He chooses not to use jawari bridges, preferring a non-buzzy sound, and says these do reverberate well.

I was anxious to hear it and planned to include him in the show, but we couldn’t coordinate it.  I love the finish; finding the carved grain of the top not to his liking, he finished it with graphite-impregnated lacquer. 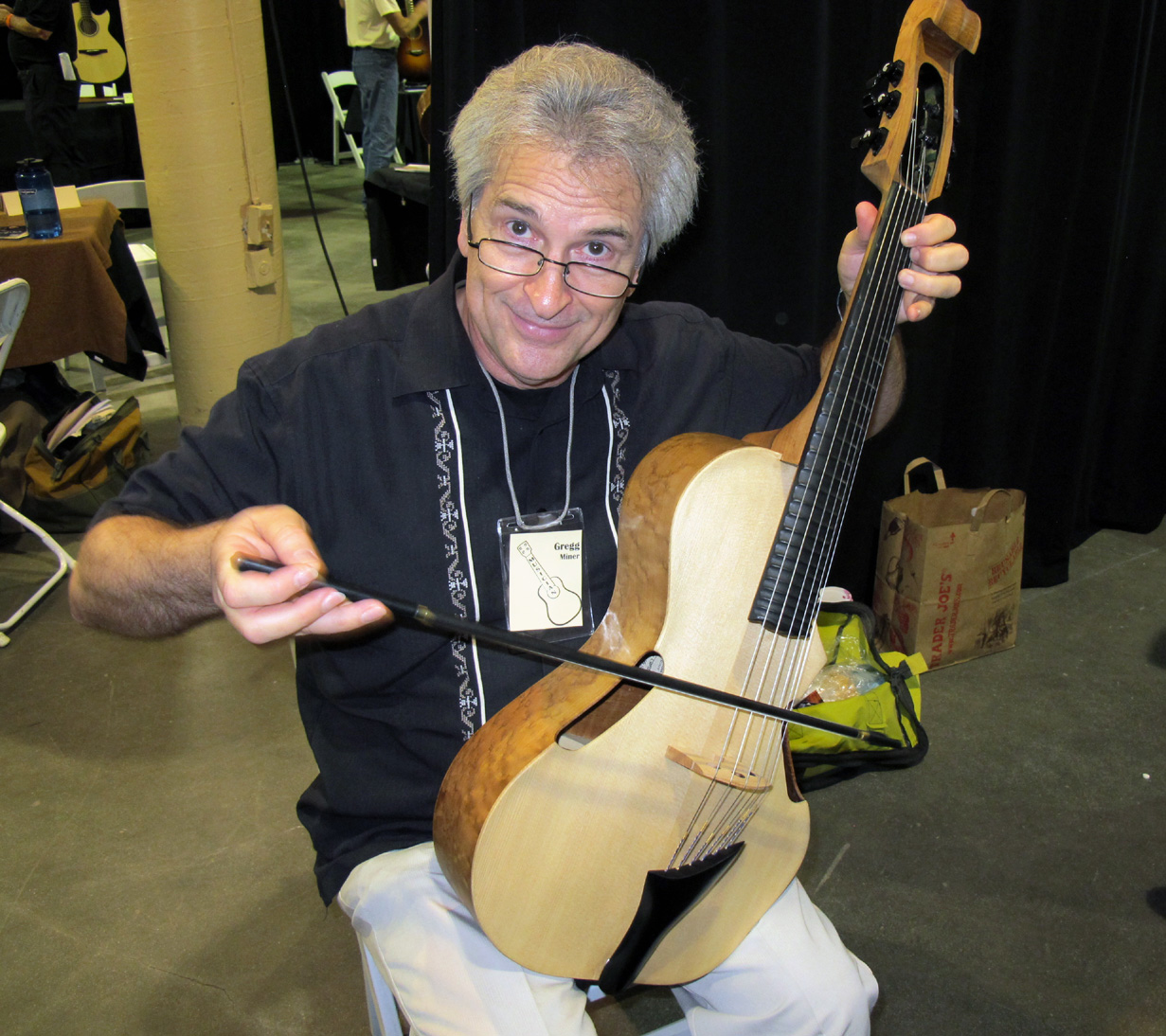 I think that does it for harp guitars at the show, but there were plenty of wonderful guitars.  Of course, I’m always seeking out the unusual, so had to try these new Arpeggione-inspired “TogaMan” GuitarViols made by Jonathan Wilson.  Very nicely designed and built; he taught me how to get some sound out of it pretty quickly. 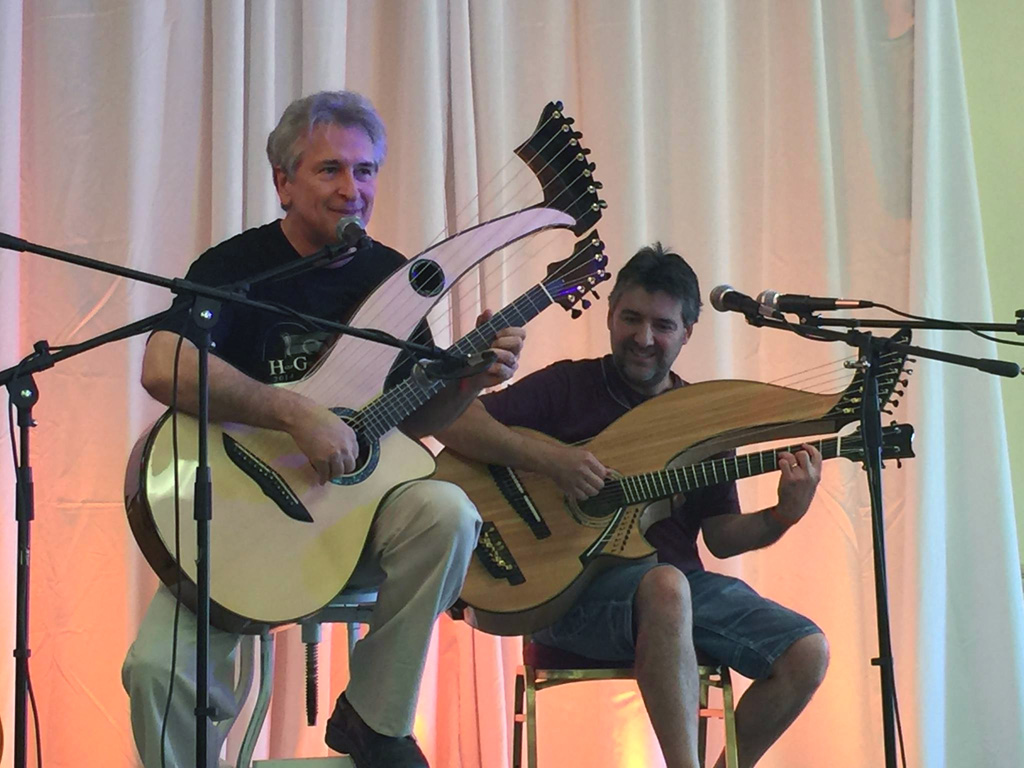 On to the show.  This was held behind a curtain in the second (not unquiet) building for overflow builders and other vendors.  200 chairs were set up and guitarists played on a small stage here throughout the weekend.

There was a lot of interest (how often do 6-stringers get to hear this many different harp guitarists?), but very light, albeit enthusiastic, attendance.

We were pretty much left to our own devices, but put on a nice, interesting 90-minute show I think.

Here, Claude and I are trying to (quickly) dial in the rather complicated P.A.  I then opened with a demo of “Why You Too Need a Harp Guitar” on Kathy’s new one, which she had just done a quick nut dress on for me.  Then a couple tunes on SB’s old Merrill #1 and my Noble harp-uke. 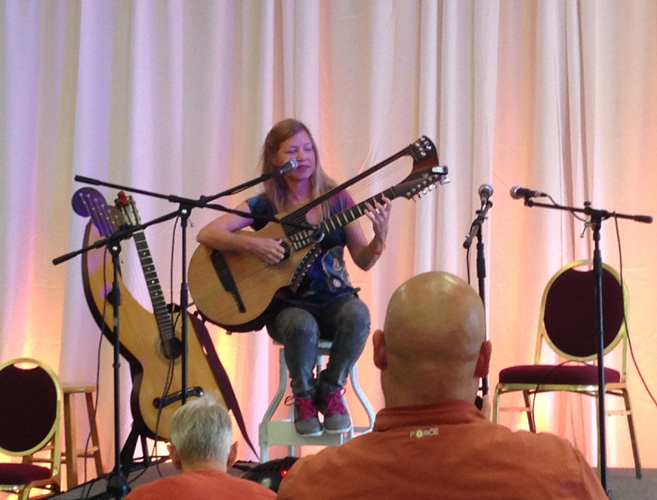 Next up was Muriel with a tune on the Brunner, then her 21-string Doolin.  Luke came up and disassembled and reassembled his HG with all 21 strings still in near-perfect tune!

The Powell brothers followed, playing their own instruments (not unsurprisingly), and then Kinloch Nelson played another of their instruments.

Here’s Kinloch (one of our Features at the Harp Guitar Gathering in just ONE WEEK!) with the other Brunner: 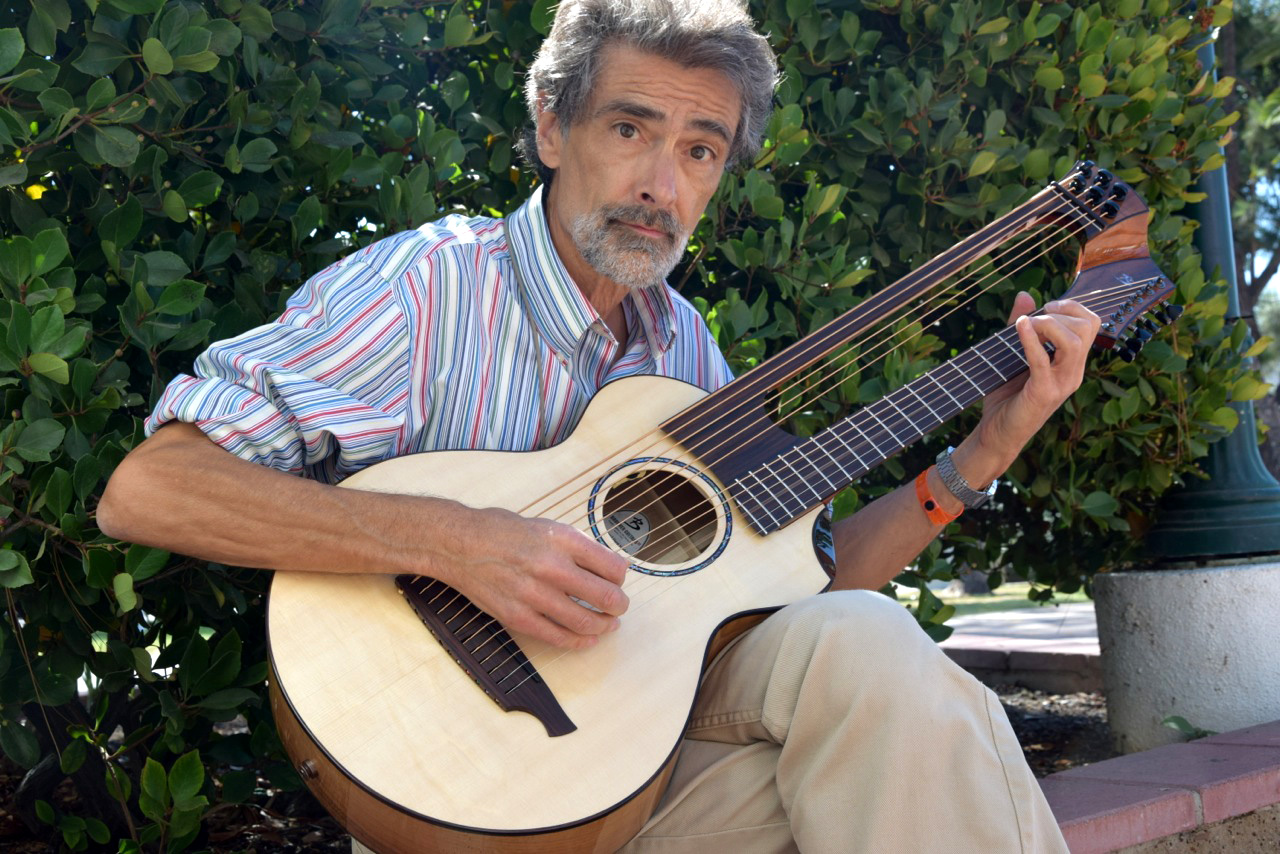 Again, I was sorry not to have included Thierry and Jim Worland (with their instruments) in the show. 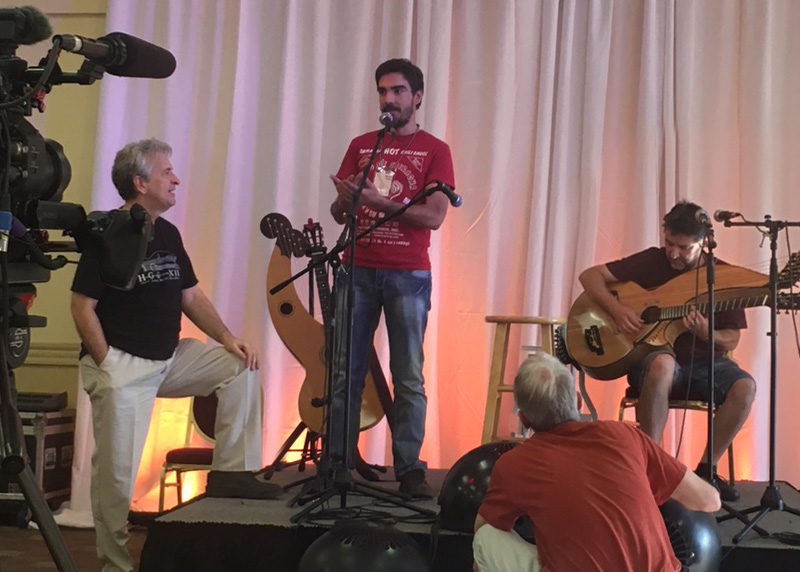 With the small audience reduced to a few dedicated souls, Michel and Claude closed it out.

But Claude – now apparently a licensed and registered “Guitar God” – appears to have had better luck at Sunday night’s show (Muriel also did a show Sat eve).  The promoter said he stole the show (this from two 6-string guitar heroes).

Dare I say the harp guitar once again rules the day?

This is the closest a major guitar show has ever been to L.A.  So I had a few visitors bookending the event (but not Kinloch and Linda Manzer, as he had mis-mapquested my zip code by a good hundred miles…D’oh!). 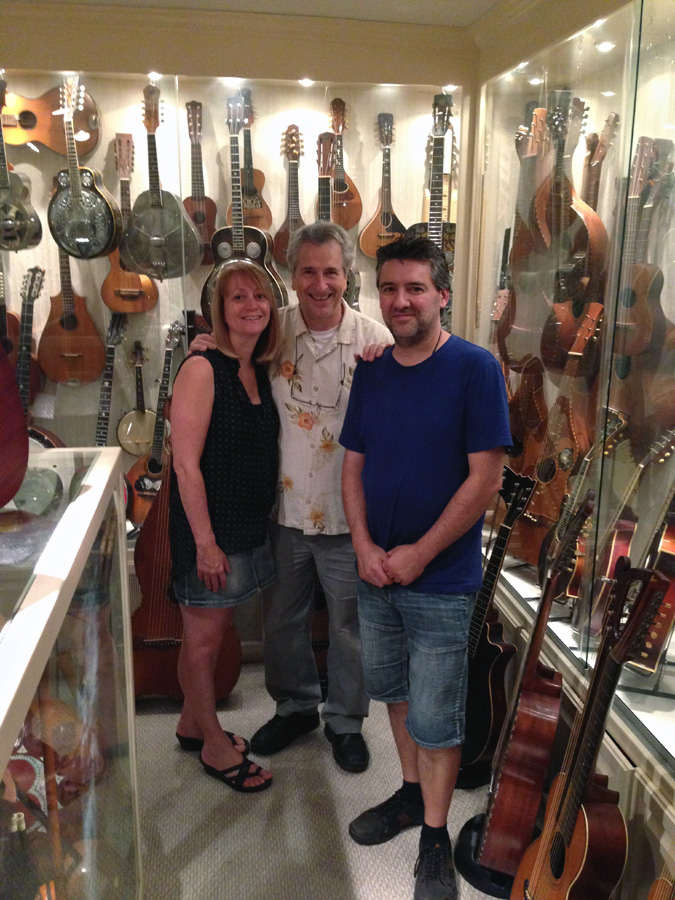 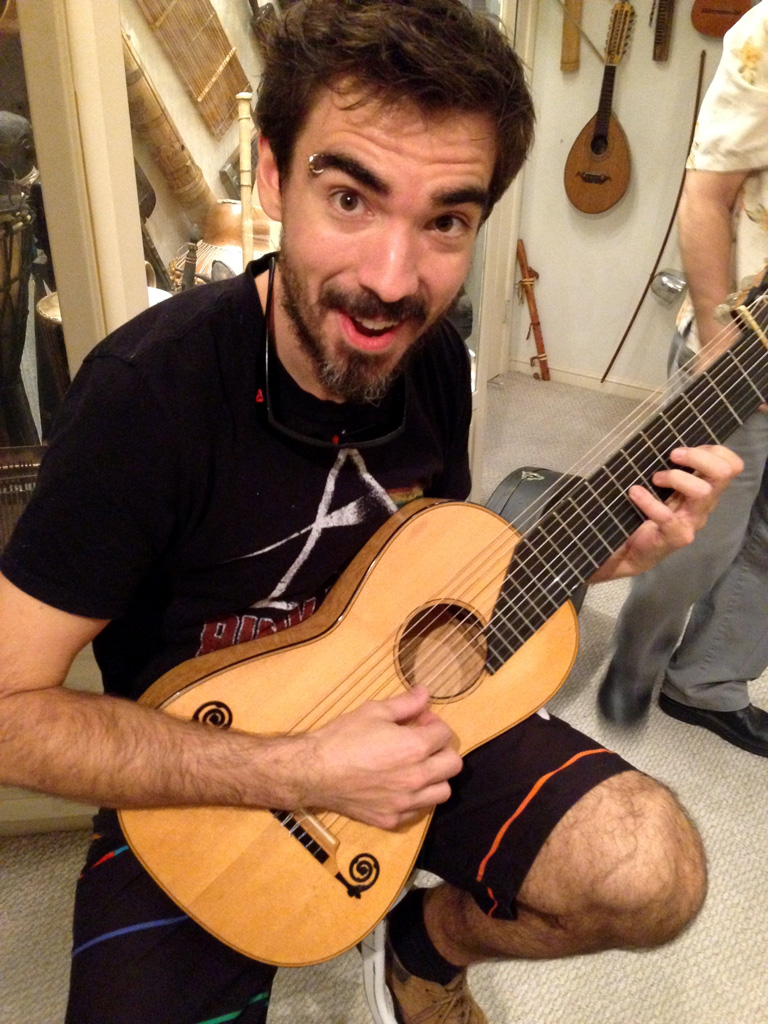 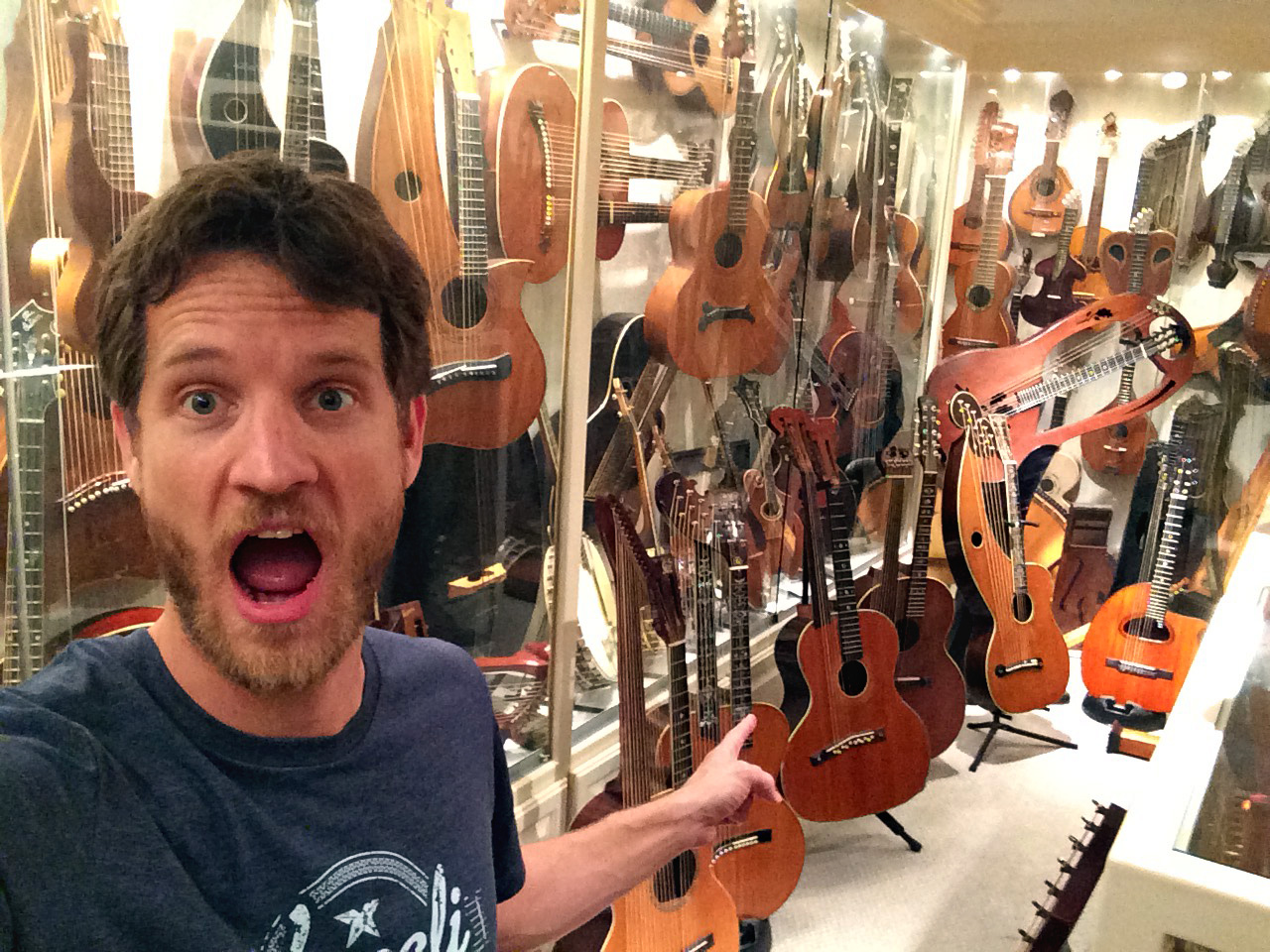 A couple days after the show, the Powells stopped by (it had been awhile).  Dave took this unauthorized selfie with a seemingly endless chorus line of harp guitars behind him. 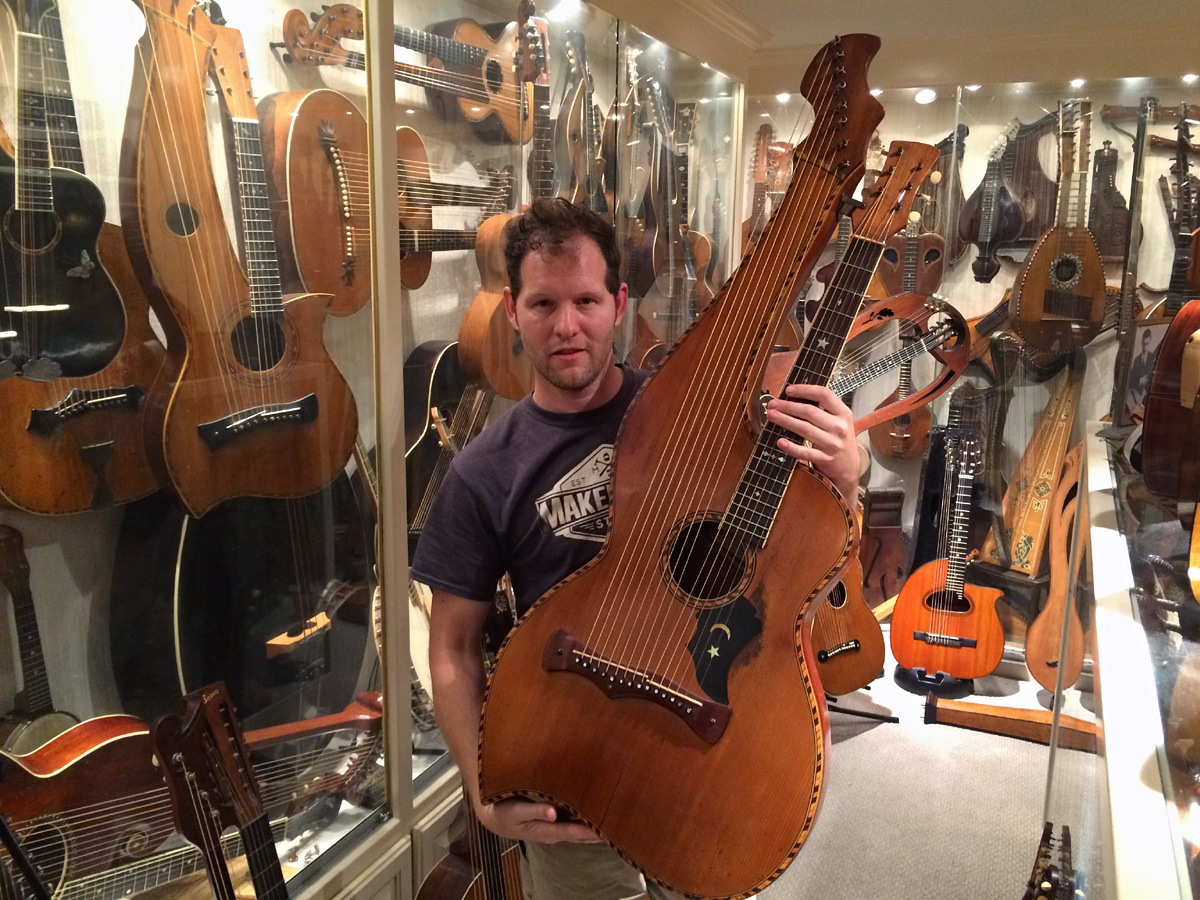 Tone, a fairly normal-sized human, is dwarfed by the largest Knutsen ever found.  Standard scale, but 19″ wide with a record 8 subs.   Actually, I better go check if it’s still there…

Jaci and I got a huge kick out of the Tonemobile – for their long trips they had built-in bunk beds…too hilarious! 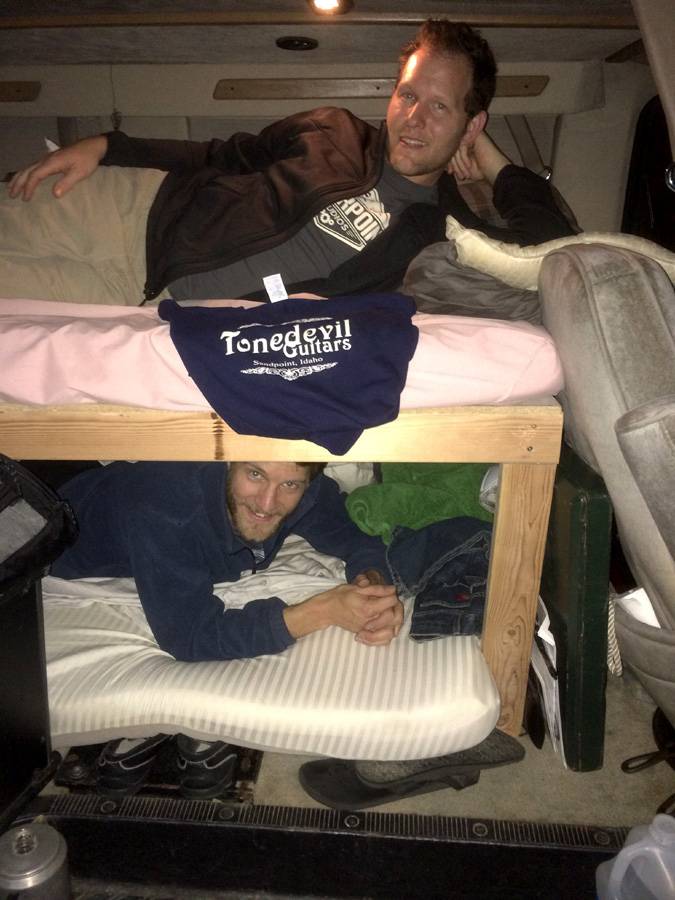 And so regretfully my extended SBAIC adventure came to an end, as the boys continued theirs.  They drove off in the dark towards Arizona (to visit family), after which they planned to cross the border for some Mexican dentistry for Tone (if that isn’t a scenario ripe for comedy and tragedy, I don’t know what is).

Sadly, they won’t be making the Gathering this year, but they promise to see us next year, should they make it back in one piece (well two individual pieces). 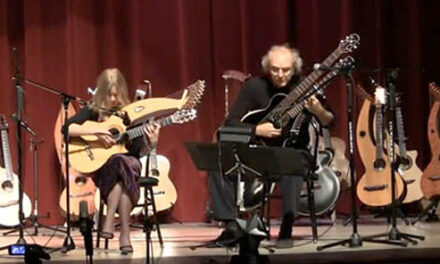 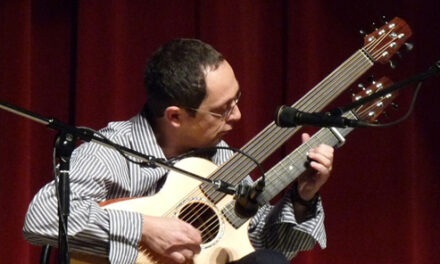 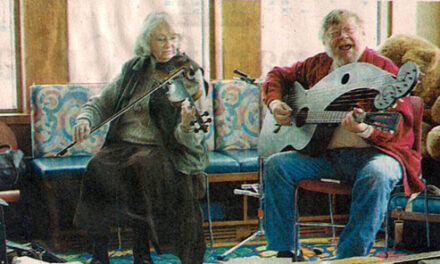