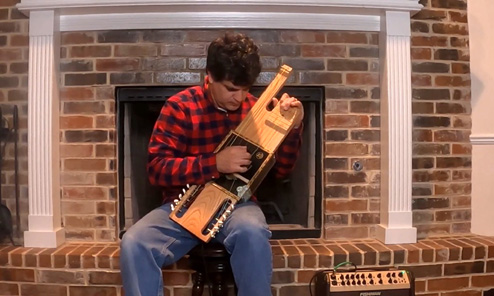 I’ve been meaning to do a little story on Rich Eberlen’s “guitar conversion” inventions for years, but just never got around to it. His latest project inspired me to do so now, as I was just so captivated by it. The name alone is worth the headline: the “cigar box Stoessel lute”! 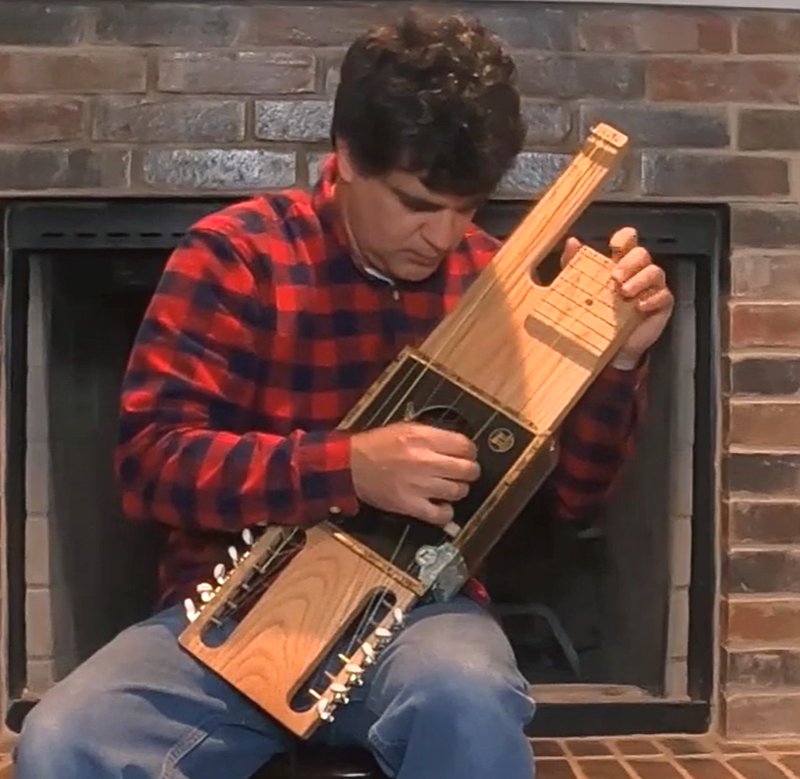 But what is it?  In this case, a cousin to the harp guitar…

But I’m getting ahead of myself. Rich runs Fretboardexplorer.com in Texas and has been buying harp guitar sub-bass strings from me for some time for his various projects. He’s productionized these over the years and sells them on his web site.

There’s his Solene (a Chapman Stick type thing) and his devices for altering the tuning (and playing) of standard guitars – the String Jack and String Rack: 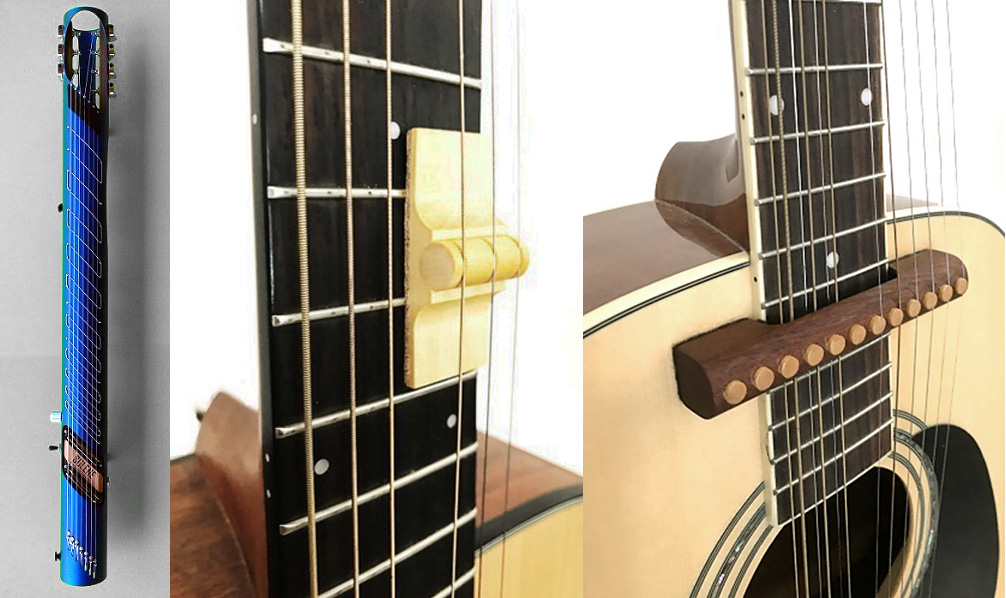 He also has four configurations of a “Harp Guitar Kit:” 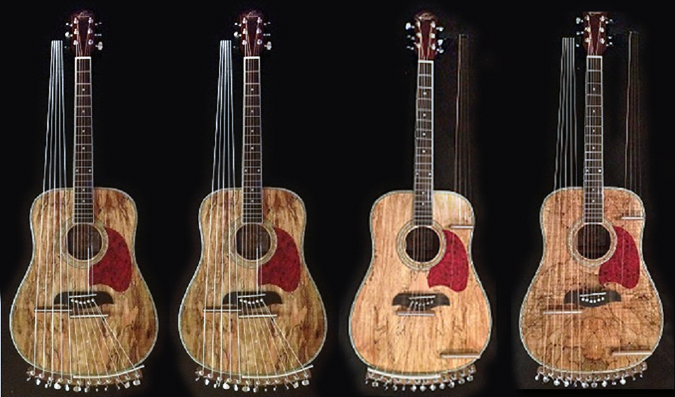 Some time ago, he streamlined the harp guitar idea into his simple but effective clamp-on “Harp Rail.” This adds instant sub-basses to most any guitar: 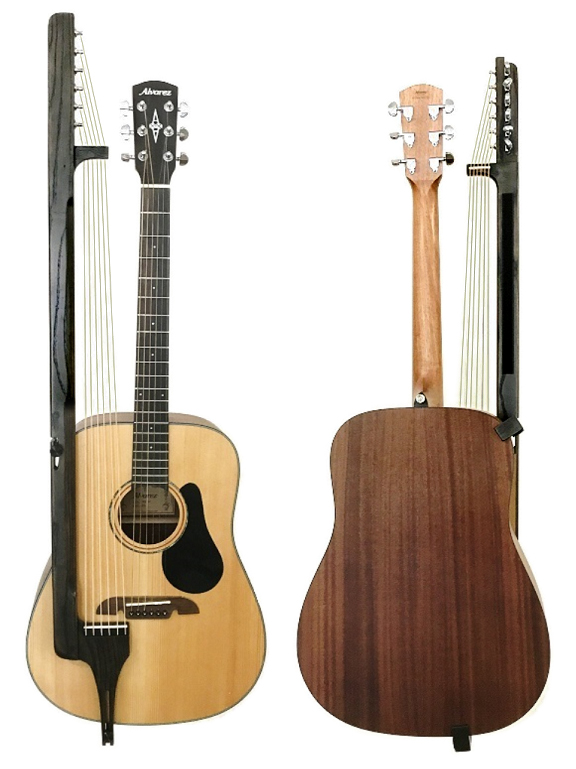 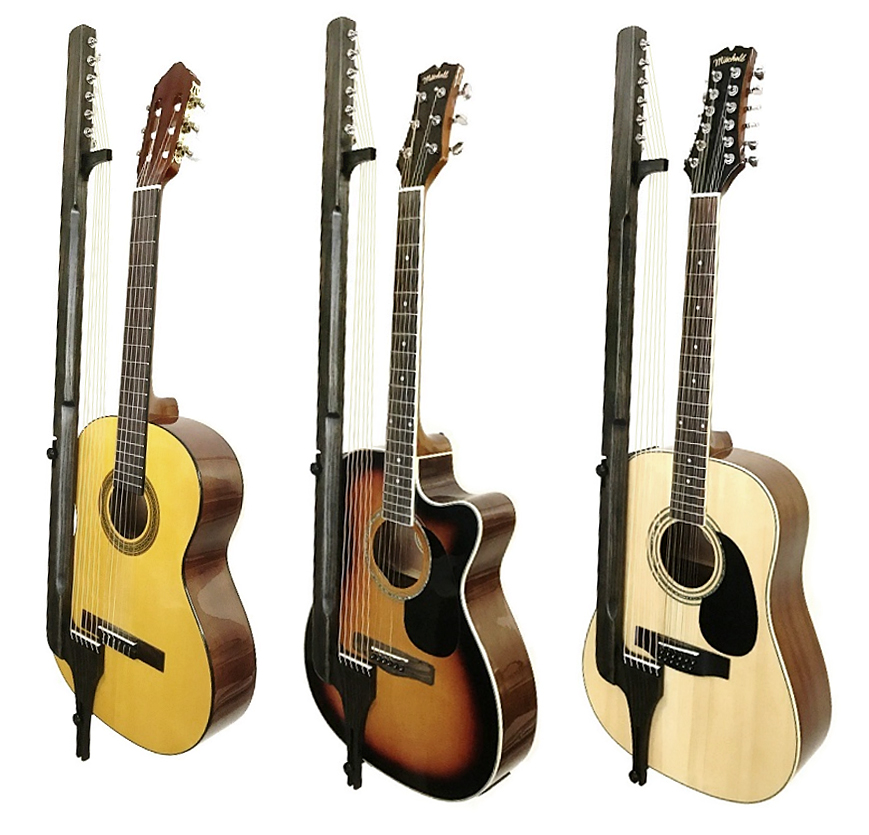 During the pandemic lock down Rich has found time to finish some projects that he’d had on the back burner. One he calls the “Treble Rail,” seen below attached to a classical guitar. It’s much like the bass Harp Rail and attaches on the opposite side. Rather than just providing super-trebles, he has six long nylon strings over a floating bridge. This then provides different tuned notes on both sides of the bridge so each string can be played on either side. The opposite space can also be used to bend the strings, like playing a miniature koto: 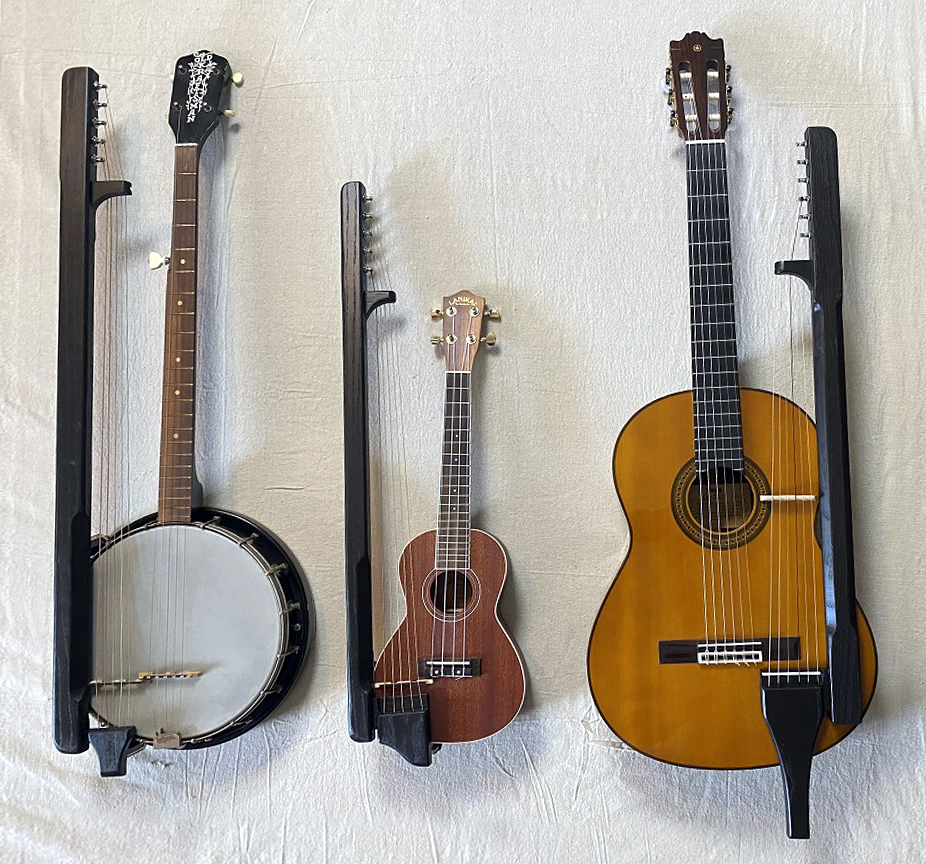 Rich has also finished his project of adapting the Harp Rail to the banjo and ukulele. The rails for both instruments have five standard acoustic guitar bass strings. For the harp ukulele, he found that using a banjo bridge couples the string’s vibration to the soundboard efficiently.

And now – his latest project: a “cigar box” version of a Stoessel Lute! He says he first learned of the Stoessel Lute a couple of years ago from my minermusic.com article. Around that time he was tinkering with building cigar box guitars and wondered if it was possible to build a Stoessel Lute. He just finished it and made a video of a little tune he wrote for it.

Above is an original Stoessel basslaute and below is Rich’s variant. It uses the same ingenious tuning in thirds. As owners of these unique instruments (or builders, like Benoit Meulle-Stef) have learned, this tuning consisting entirely of alternating major and minor thirds is a very cool idea. The other even more unique feature of this remarkable invention by Georg Stoessel is the fretboard, which is laid out as on a lute or zither, but fingered 90 degrees out. Again, it’s natural and comfortable (but yes, as you’ve already noticed, only first position is available…).

Of Stoessel’s five main variants (he actually built hundreds of experimental variants, all of which were destroyed), he put diapason (open) strings on two of them. On the bass, they provide bass and chords to the right of the fretboard, as in a concert zither.

Being familiar with harp guitars, Rich chose to switch the floating strings to that configuration for his standard Stoessel lute tuning of G, Bb, D, F, A, C and E. He tuned the five subs to D, G, A, Bb and C.

Oh, and he plugged it in. Check out Rich’s video of the first amplified cigar box Stoessel lute. I love the little Blues bend he does, especially as this is not – as you can see – a harp guitar, but something a little different. Indeed, he’s playing lovely and authentic contemporary Stoessel lute (now there’s a sentence I never once predicted I might have cause to ever say!).

Rich, who is also a talented musician, says that he has a few more projects to finish. So be on the lookout for more of his YouTube videos demonstrating his inventions! 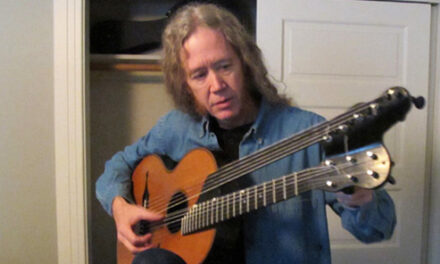