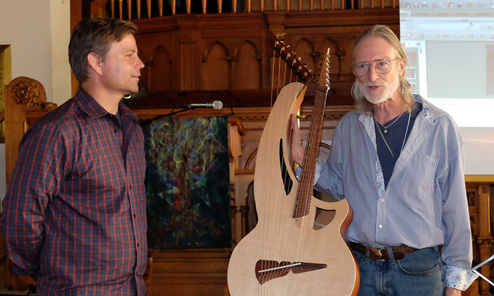 Continuing the coverage of the 14th Harp Guitar Gathering…

We wrapped up the long-awaited harp guitar debut of Don Ross, and began our Luthier Panel, something we have done every single year since HGG1.  We had two last-minute trip cancellations (Duane Noble and Max Monterosso) which gave us the opportunity to include some new faces. 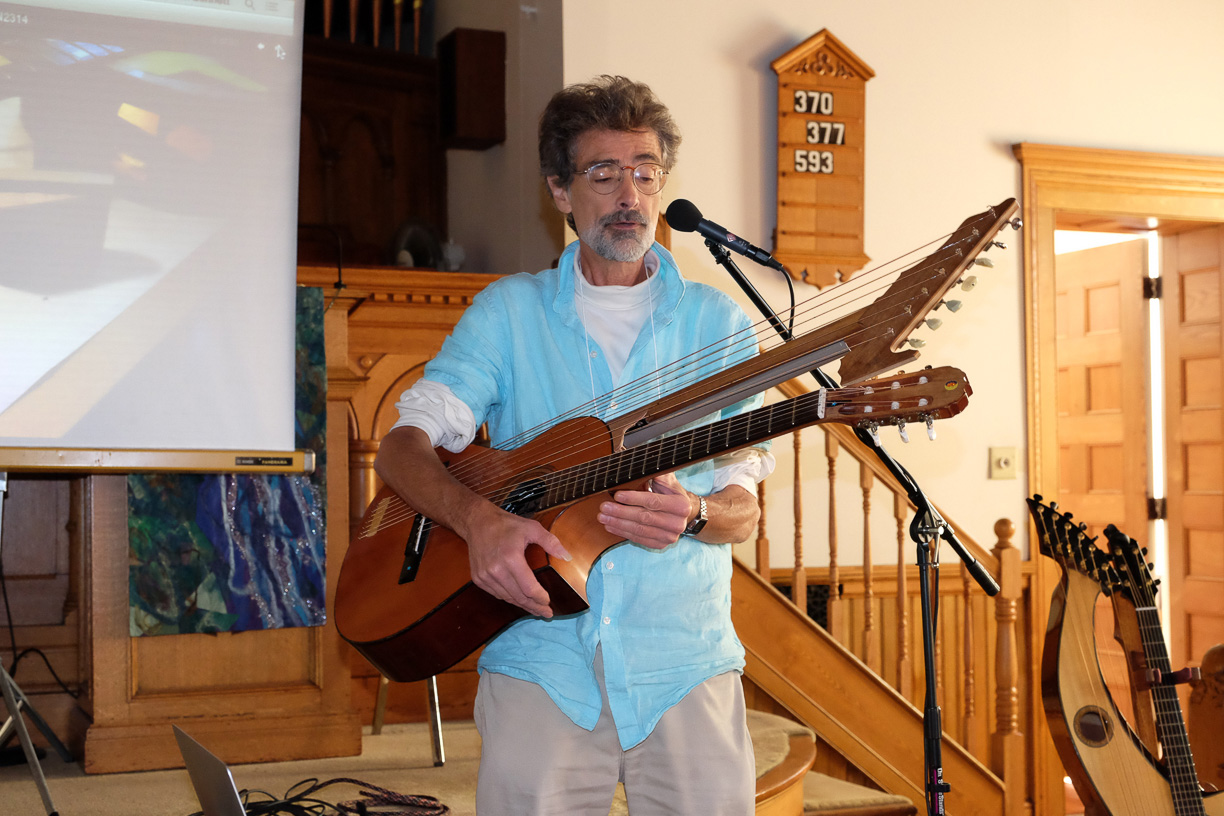 Kinloch Nelson?  I thought he was a player…

Correct, and apparently still too cheap to buy an instrument.  Or maybe he’s just too tickled with his custom harp guitar to switch!  It was a beat-up classical guitar once destined for the trashcan that he Frankensteined in truly frightening ways to create a steel string harp guitar.  It actually sounds great and is technically fully functional.  I think it’s wonderful, though it certainly wouldn’t win any beauty contests. 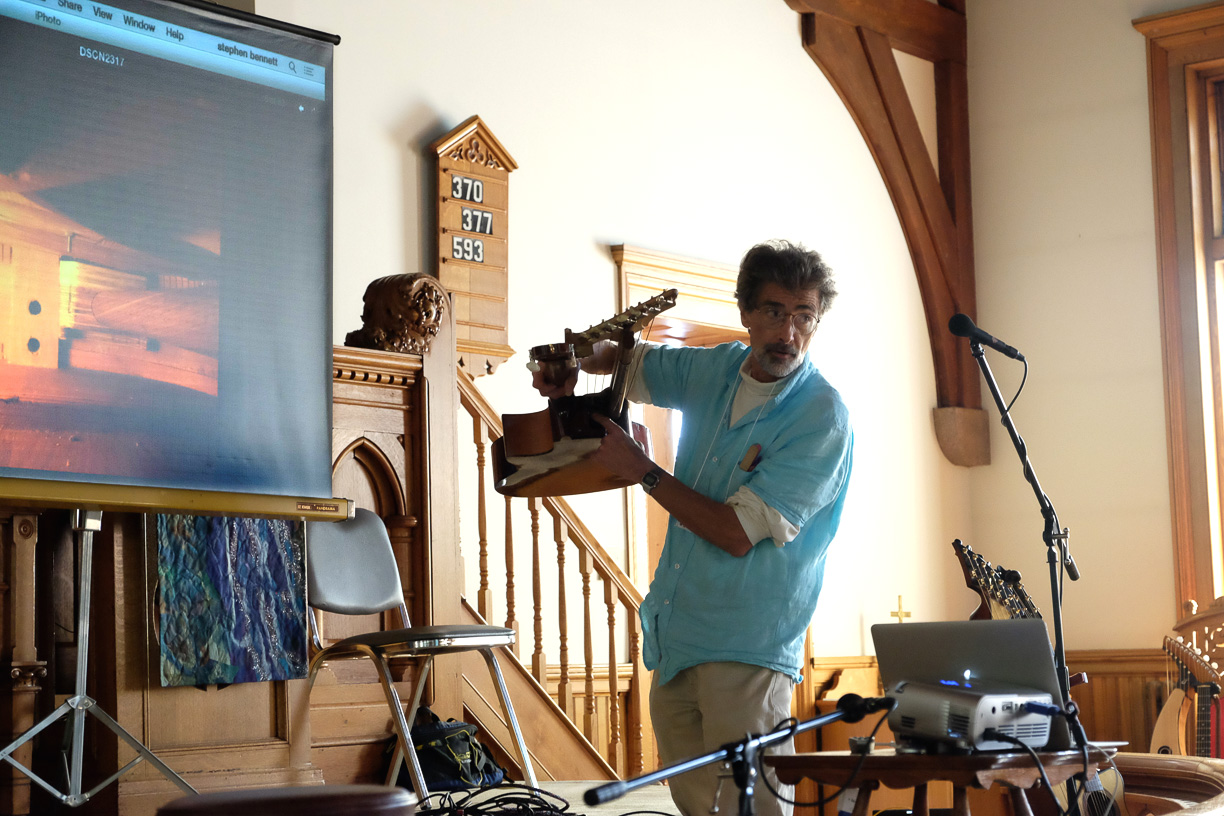 Kinloch took us through the concept and construction through a series of slides.  These are duplicated on his web article if anyone wants to continue the tradition.  As the photos showed the work becoming more and more invasive, the audience sat spellbound, the professional builders, including host Benoit Meulle-Stef, horror-struck.  But wait’ll he played it in that evening’s concert! 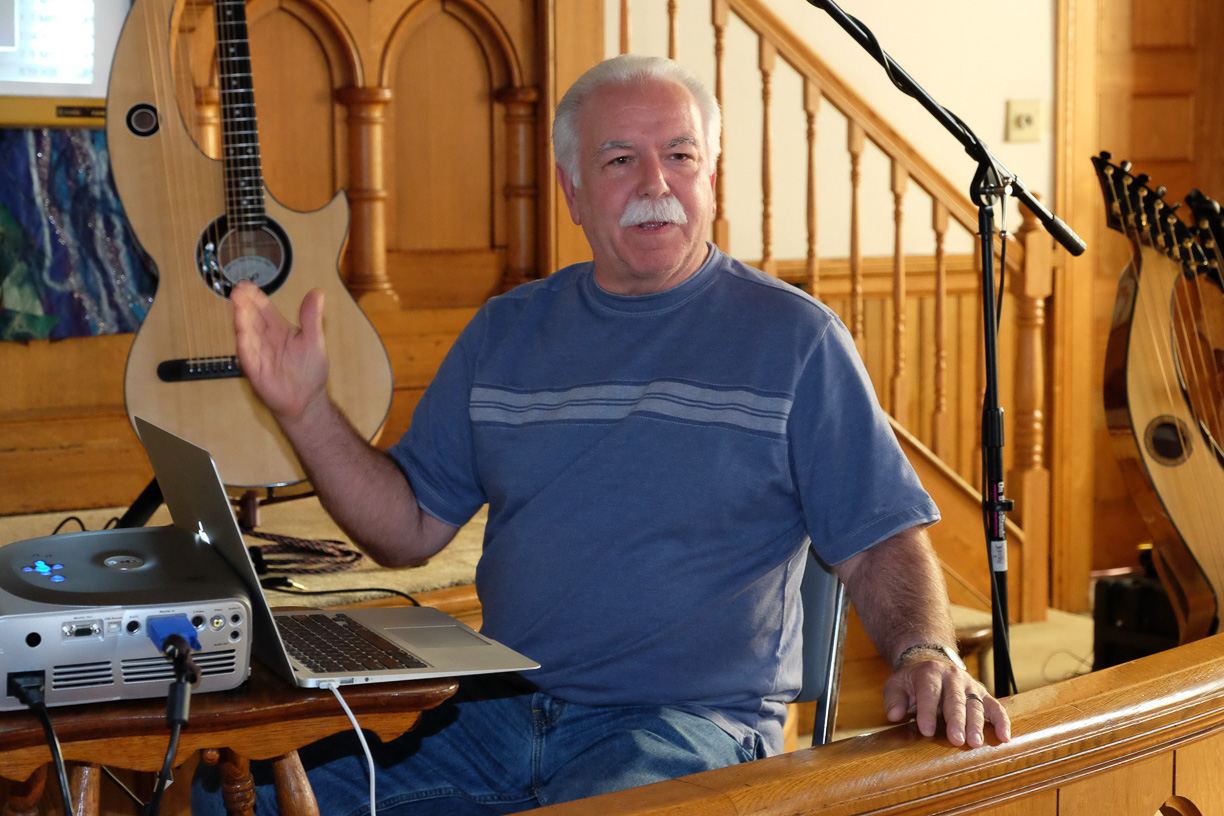 Benoit was in safer territory inviting Michael Schreiner to present.  We’ve been bugging Michael to get on stage ever since he built his first harp guitar a few years ago.  He does them rarely, just for his own enjoyment.  He never intends to sell them – and in fact, doesn’t want to – but nevertheless does, as they’re great! 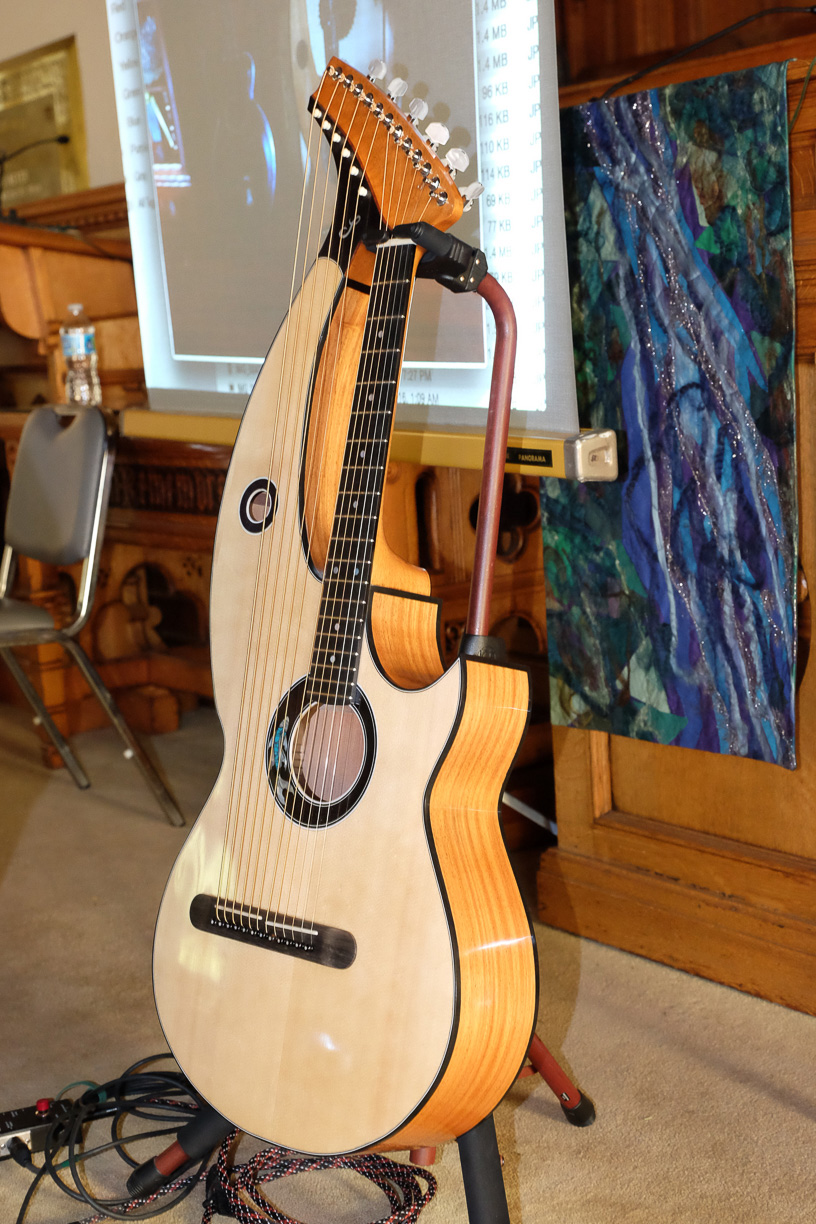 He sold the latest at the end of the Gathering to newcomer Matt Farr, who had spent the weekend exploring all his harp guitar budget options. 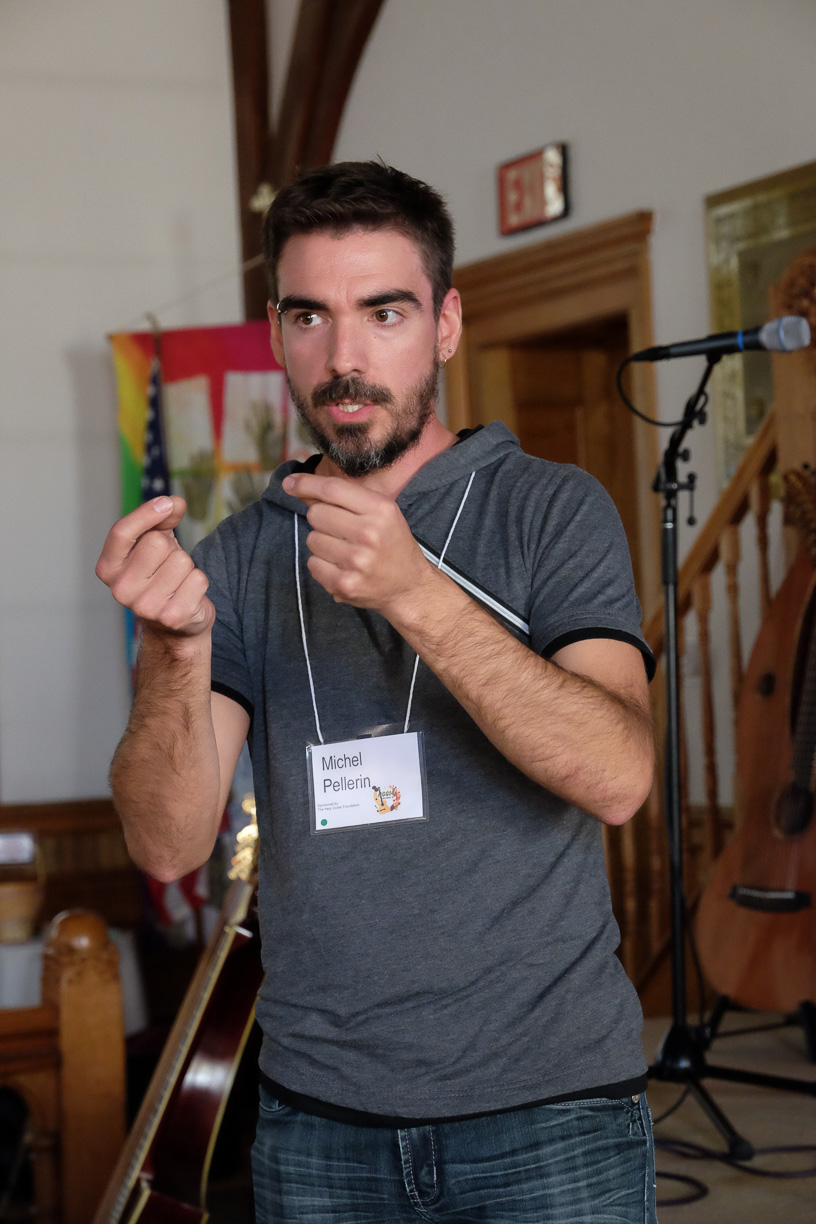 Michel Pellerin from Canada brought his whole family this year.  He’s become a regular, and a very popular builder in the high end of the custom harp guitar market. 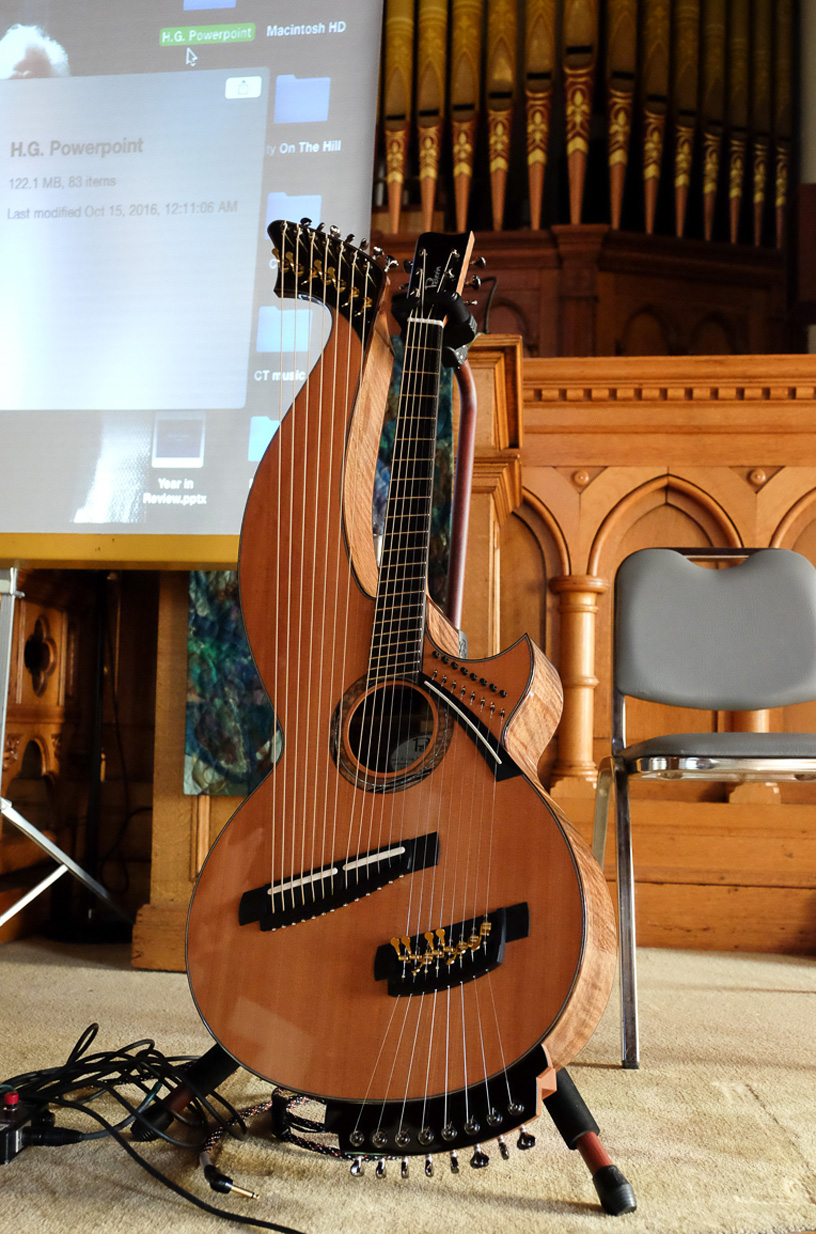 The latest is a stunner in every way. 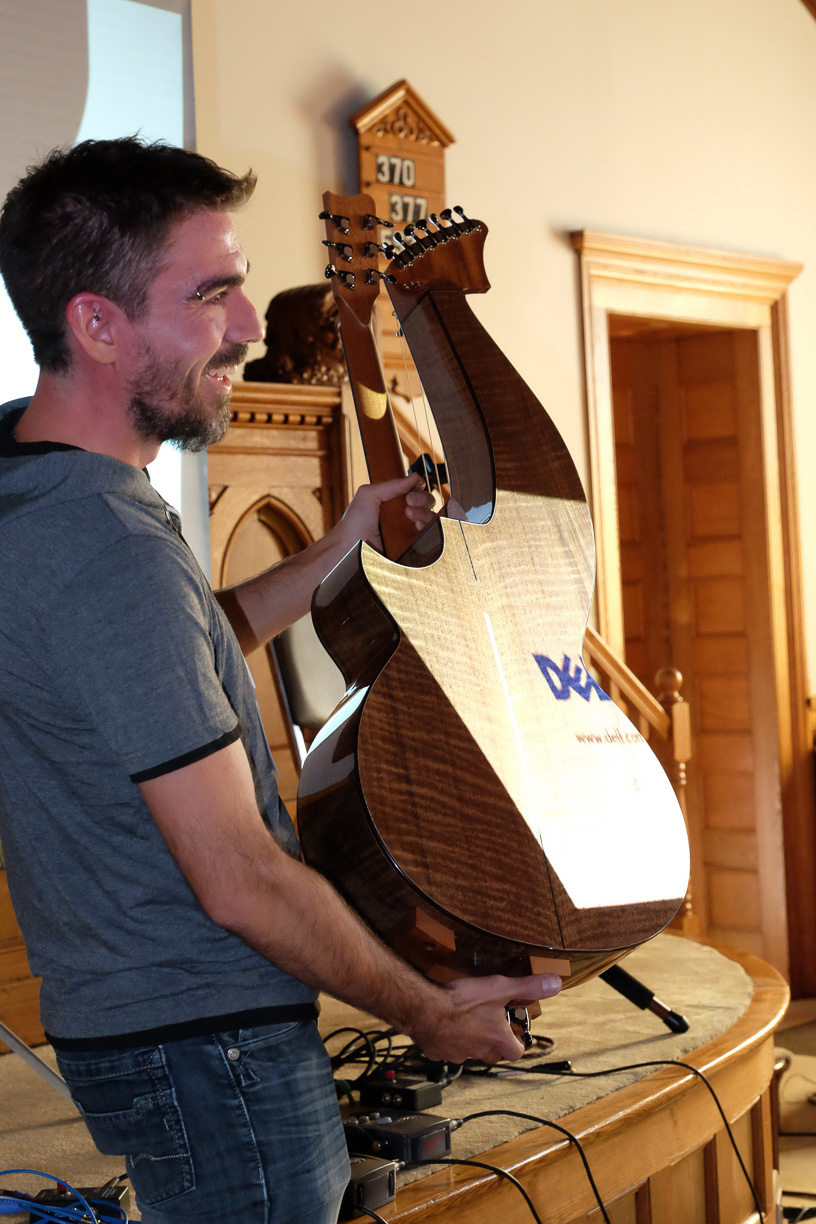 Unfortunately, we forgot to turn off our Dell projector which kept disrupting Michel’s demonstration with an unasked-for logo, though he started laughing along with us. 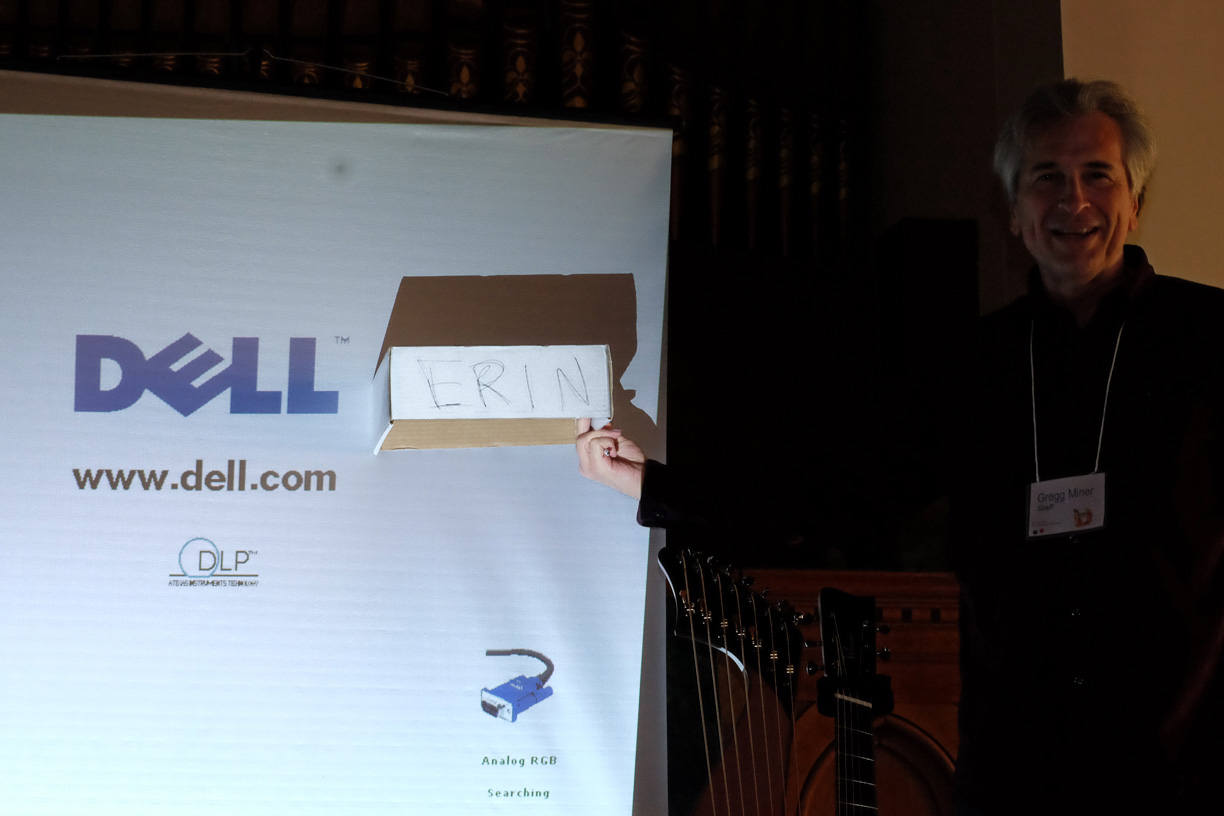 I had just a few seconds to run out and create an impromptu announcement for his proposed new harp guitar line. 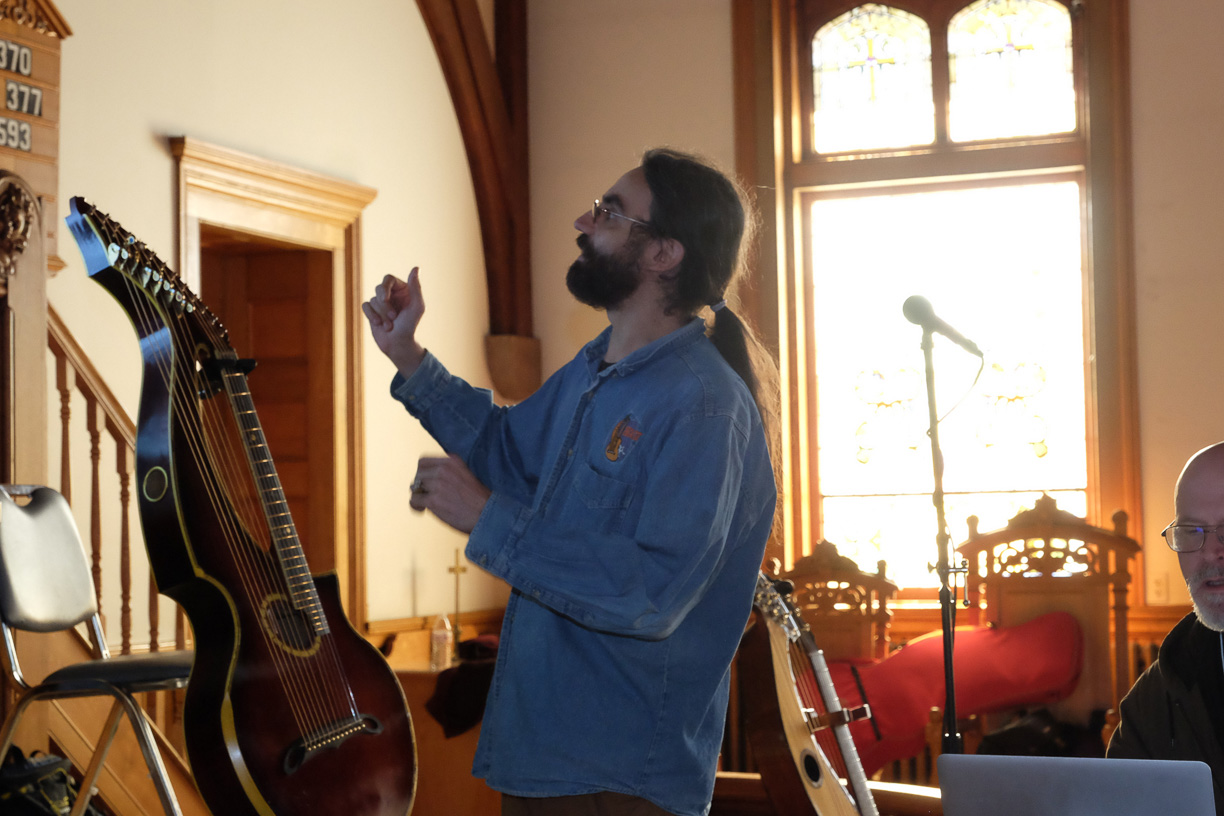 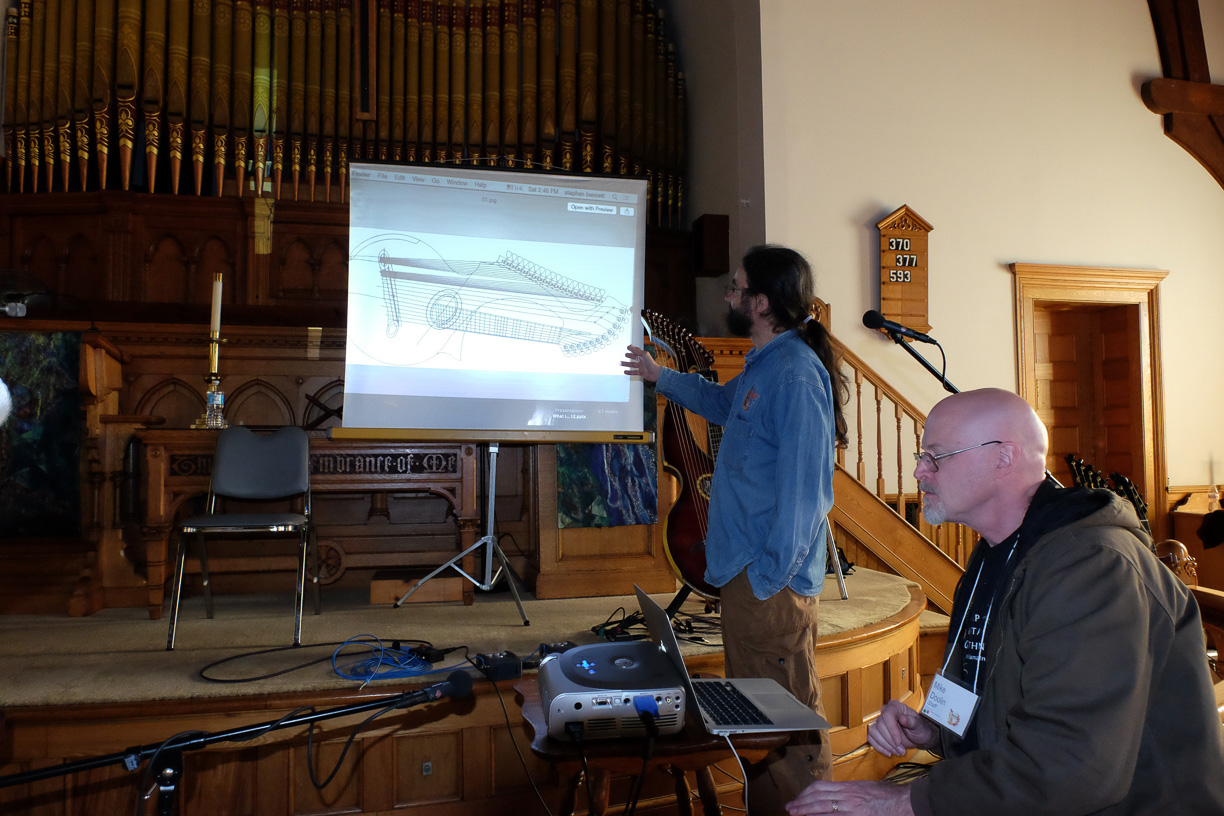 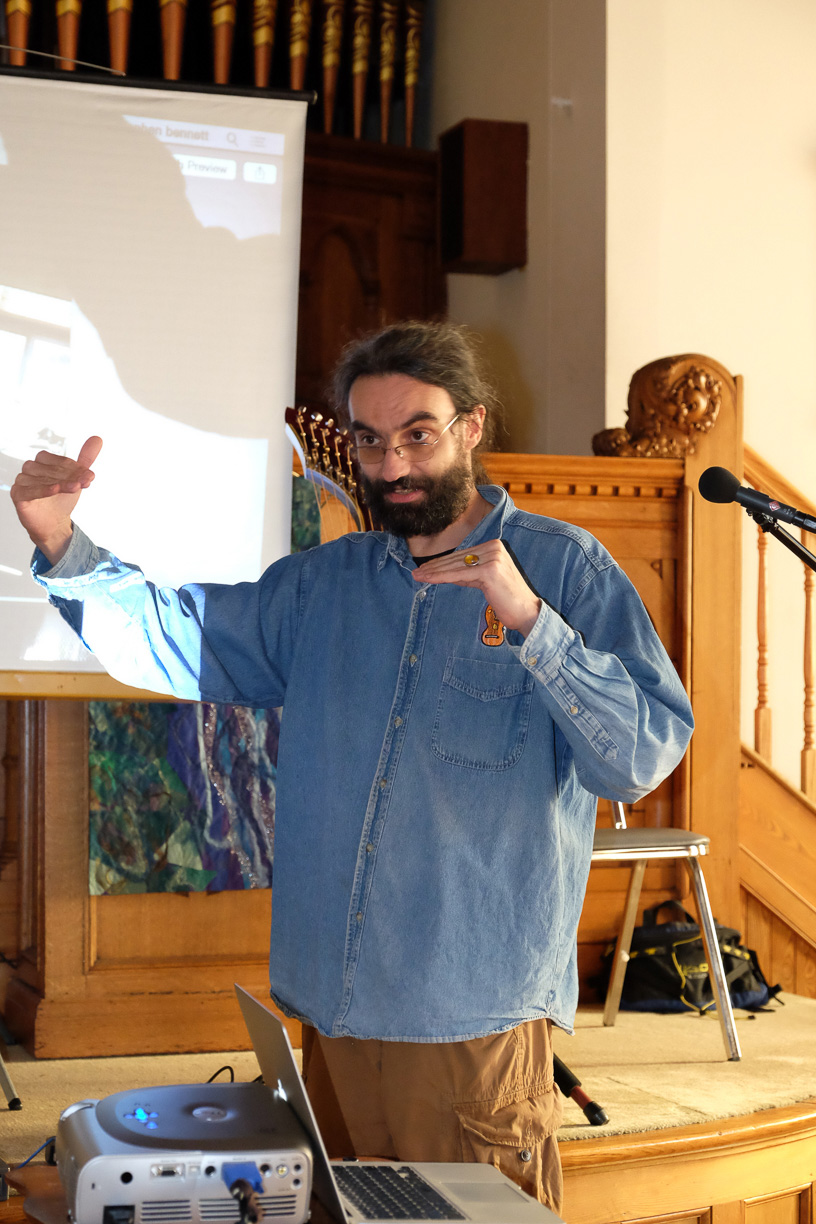 Always animated and excited about his work, Ben is. 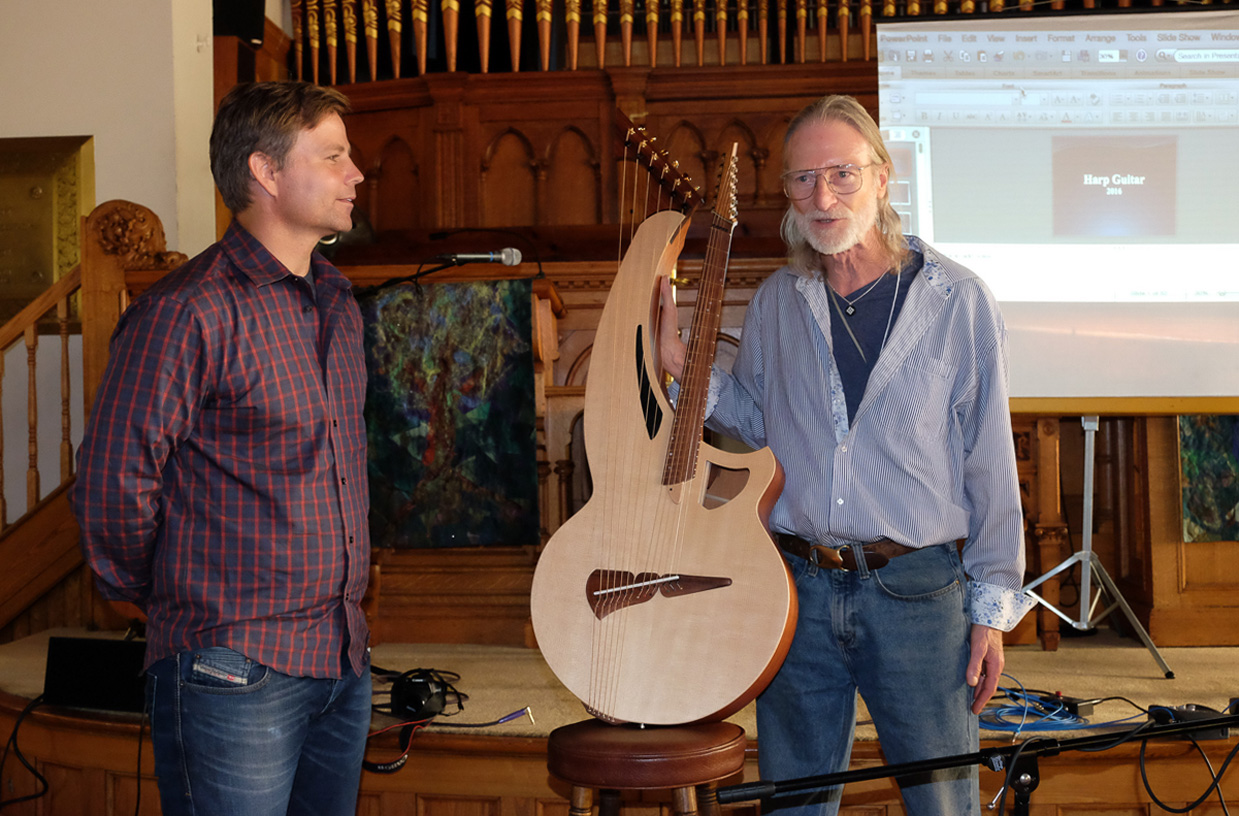 A total surprise and treat this year was the inclusion of Steve Klein.  We literally didn’t know if he was coming until he showed up with Klein Community web site creator Wilson Schuneman just as Friday night’s dinner started.  Though we had been hearing rumors, no one expected that the new Klein acoustic harp guitar prototype would be finished!  I gave a teaser about this joint project with Dyer Harp Guitars  in my April blog (that’s co-owner Scott Holloway beaming proudly above).  I don’t see the full story posted yet, so will “nutshell” it here.

The story goes that circa 1993 Michael Hedges and Steve Klein were collaborating on a contemporary version of the Dyer Harp Guitar that Michael had been playing live and in studio.  Those designs were dropped in favor of the Electric Harp Guitar that we’re all familiar with – and that might’ve been the end of the story.  But after a chance meeting at NAMM less than a year ago, Steve, Scott and “New” Dyer builder Jim Worland got excited about resurrecting the project.  Steve got out his original plans, gave them a slight tweak and that’s what he showed me last April.  The plans included all the internal three-dimensional bracing and baffling.  The headstock would be Steve’s recent modern design with its futuristic tuners.

Under Steve’s direction and daily iPhone back and forth with Jim and Scott, Jim built it (Steve’s luthier partner Steve Kauffman did the bridge).  Needless to say, you had to be there for Steve’s explanation of what it is and why.  Stay tuned at Klein Community for additional news. 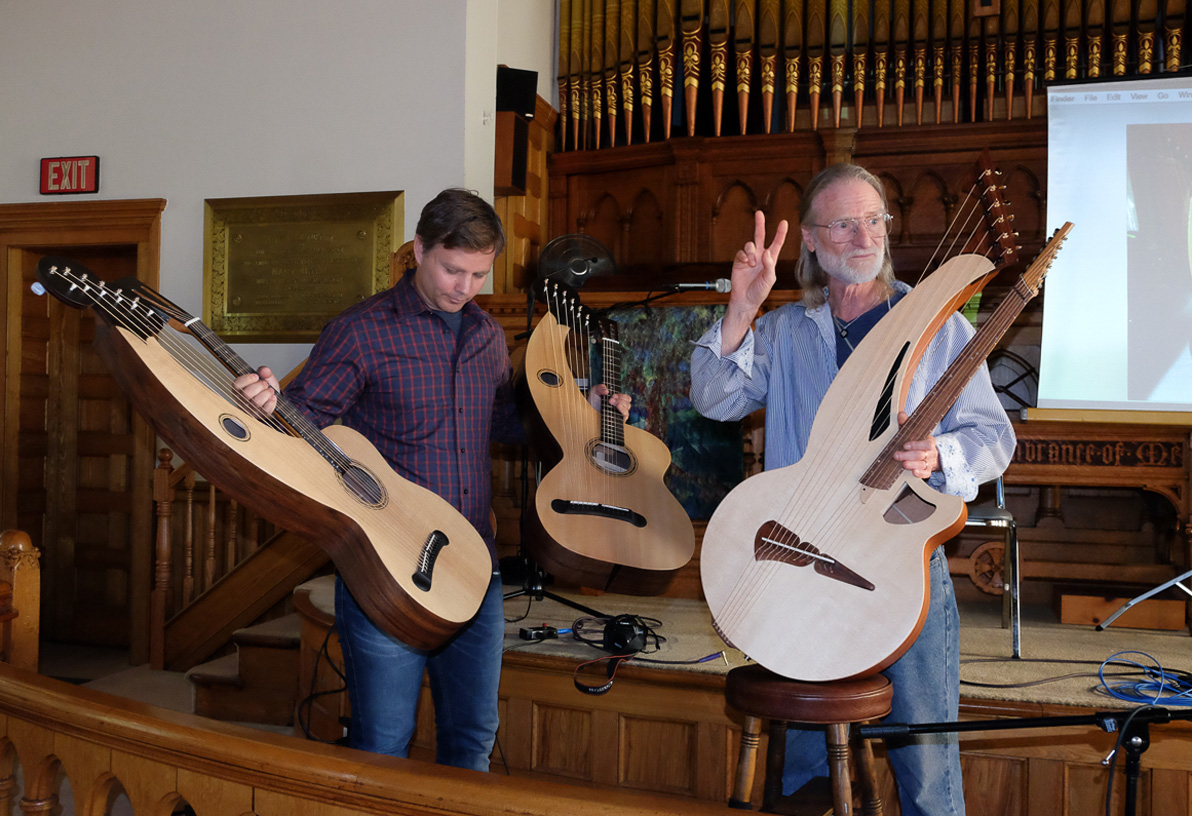 Next, Scott (who had only arrived that day) brought out two essentially identical Worland-built Dyers, one with their standard bracing and one braced by Steve.  Again, they had let me show these two tops in my April blog (I think you’ll be able to tell which is which!). 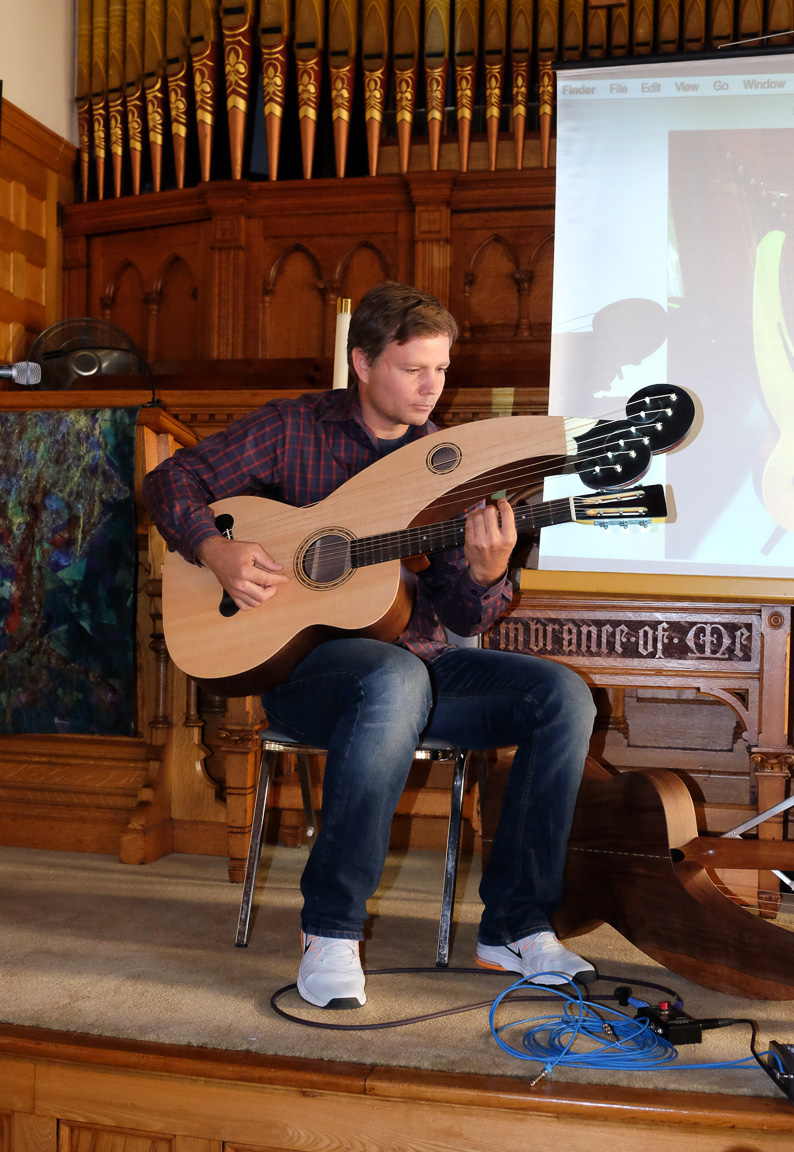 Scott played each so we could hear a tone comparison… 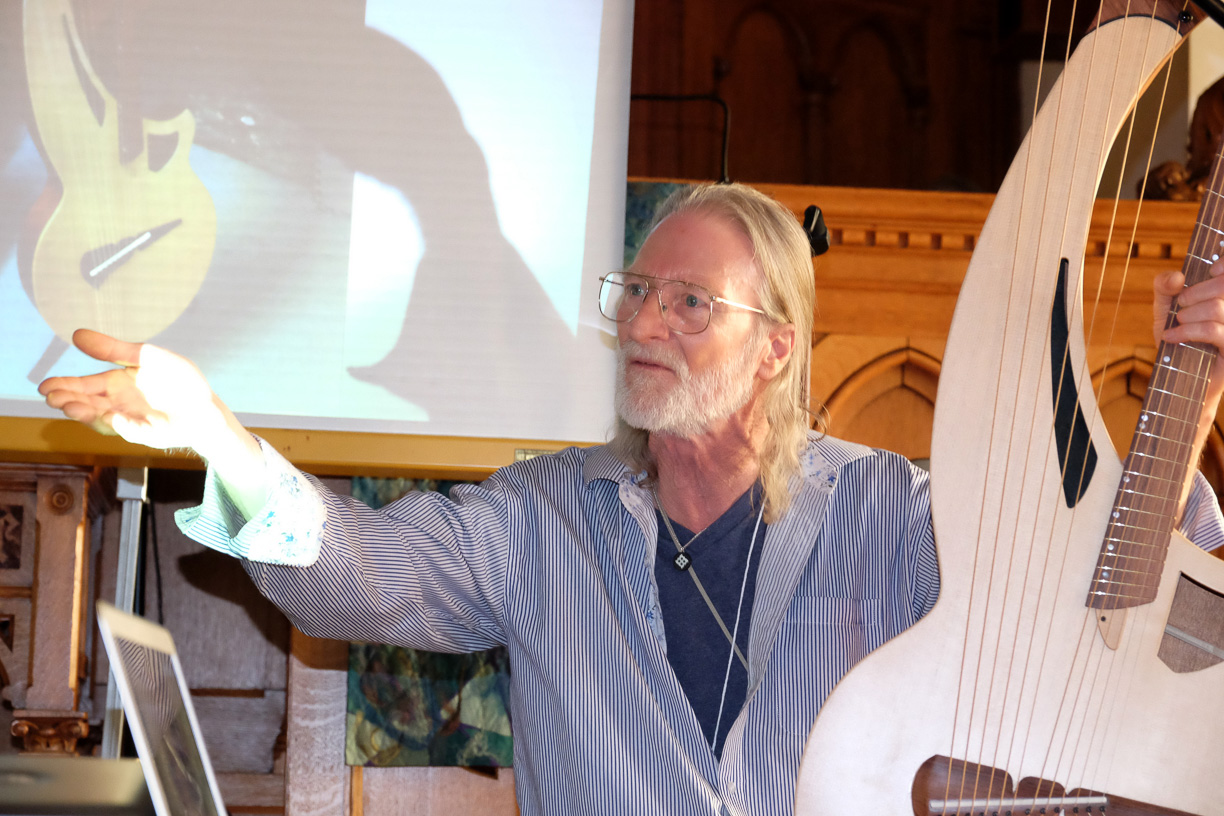 …while Steve narrated and discussed with the audience.  The votes were split somewhere down the middle as to which listeners preferred.  Again, for this, you had to be there (and why weren’t you?!). 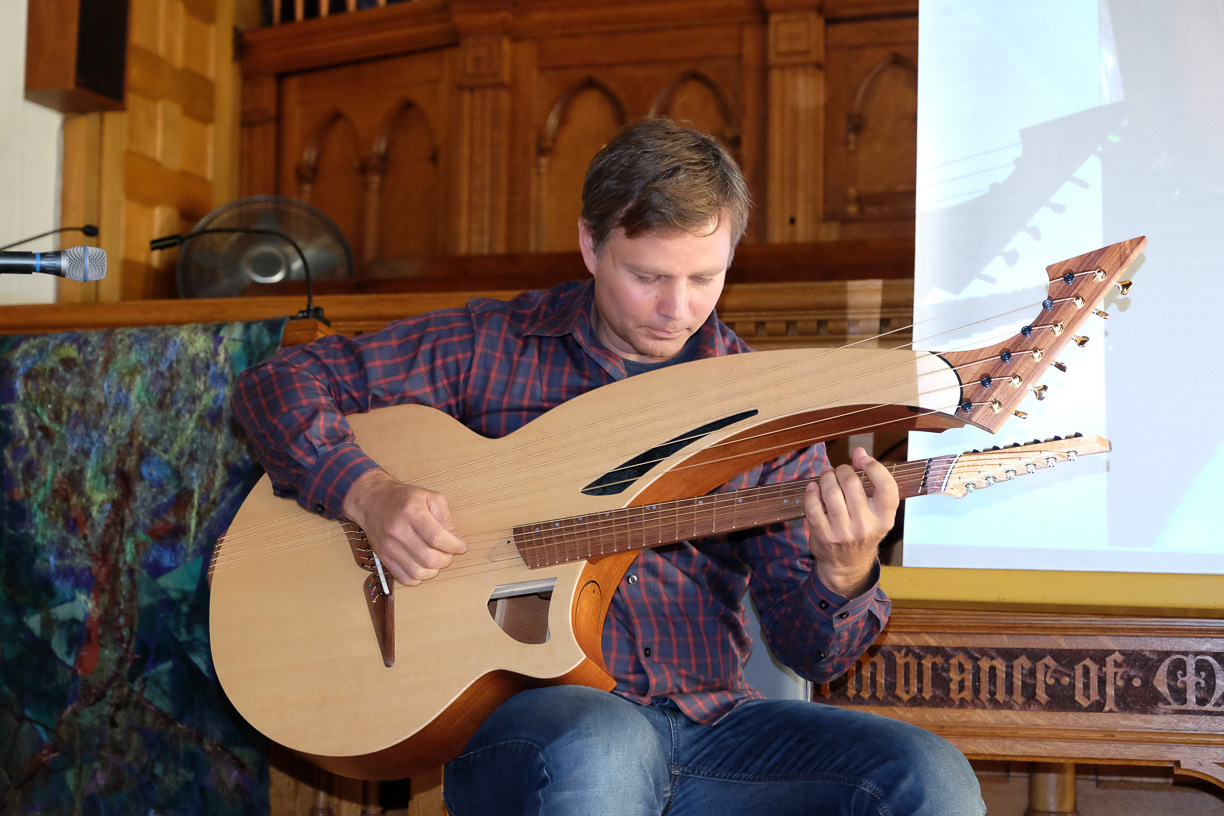 Finally, Scott played for us the…well, I don’t actually know what they’re going to call it!  I’ll leave that for the official release.

But while you ponder that, we’re going to take a step back and immerse ourselves in the harp guitar’s past when subs were fewer and “early romantic guitar” music held sway… 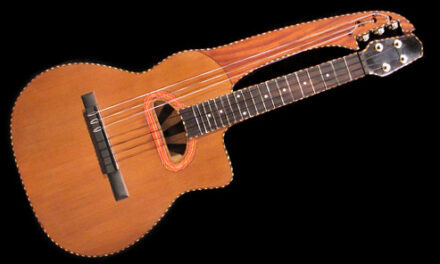 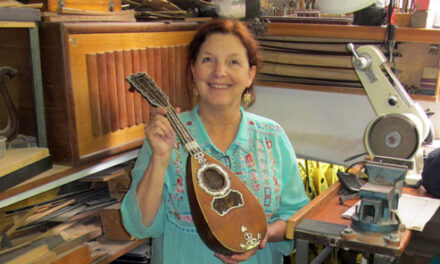 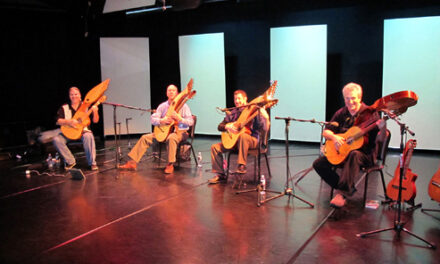 Artistry of the Harp Guitar