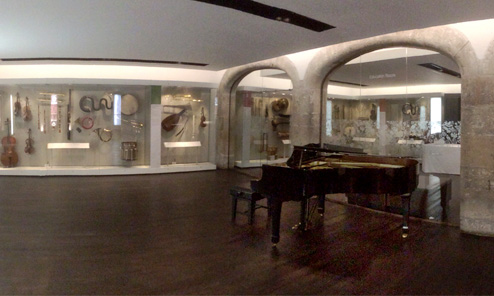 After my quick introduction to this year’s Summer Adventure Double Header, we begin with a 12-hour transatlantic flight from Los Angeles to Amsterdam (nice airport!), then a quick hop to Edinburgh.  My wife Jaci and I were headed there for a joint meeting of the European Galpin Society and the American Musical Instrument Society. 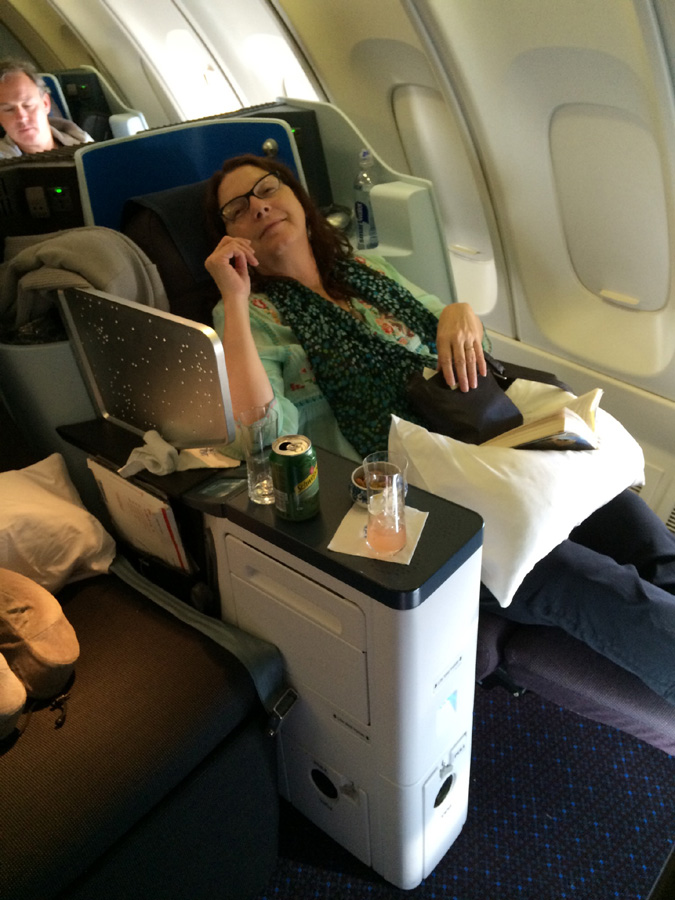 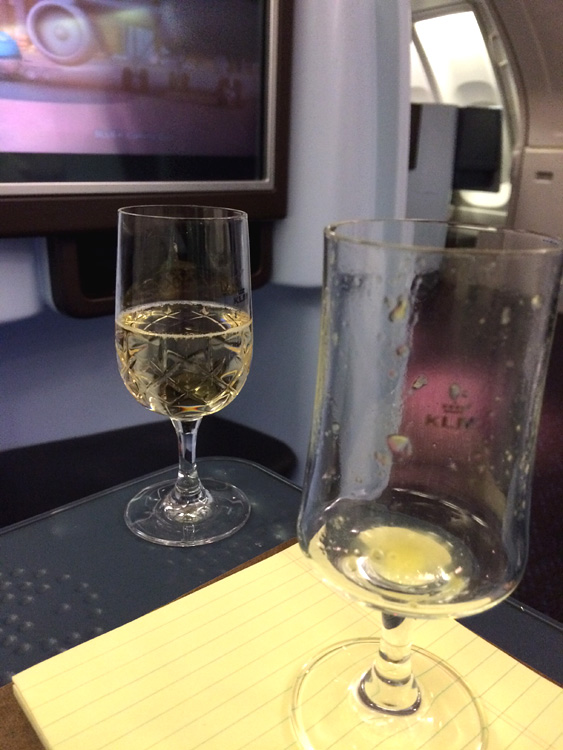 For the first time ever, we finally had enough Chase VISA miles to upgrade to business class for the round trip.  That’s a new mandate! The second we sat down in our own private KLM quarters, they were hovering over us with champagne and continued to stuff us with food and drink the moment we would pop up from our fully prone positions.  Jaci managed to sleep; I did not (memo to self: bring padding for hips and other sensitive spots).  So it didn’t solve the jet lag problem but definitely helped. 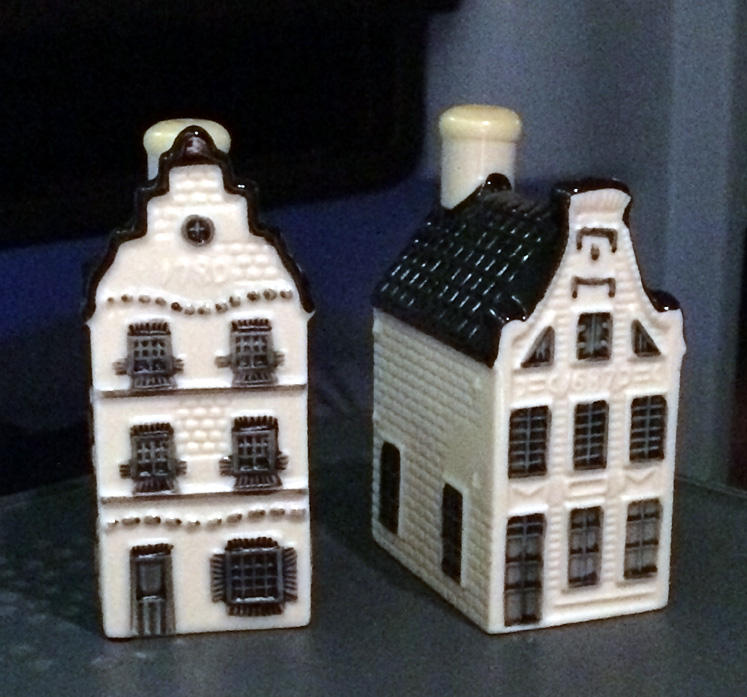 We even got little ceramic souvenir Dutch house bottles filled with jenever liquor to collect and trade with our (business class) friends.

A 30-minute cab ride to the city with a local whose brogue was so thick we might as well have been in a foreign land, and we were pulling up to our digs for the week, Pollock Halls. 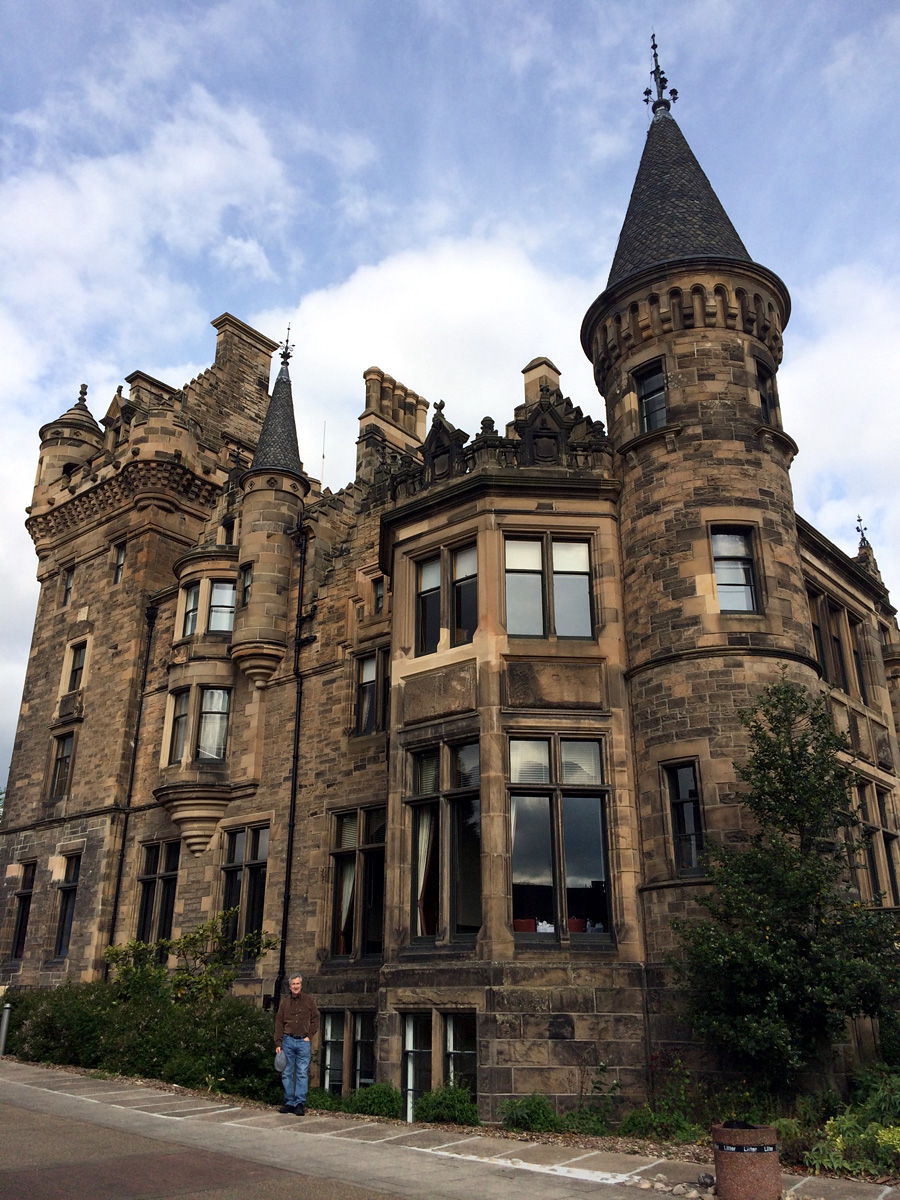 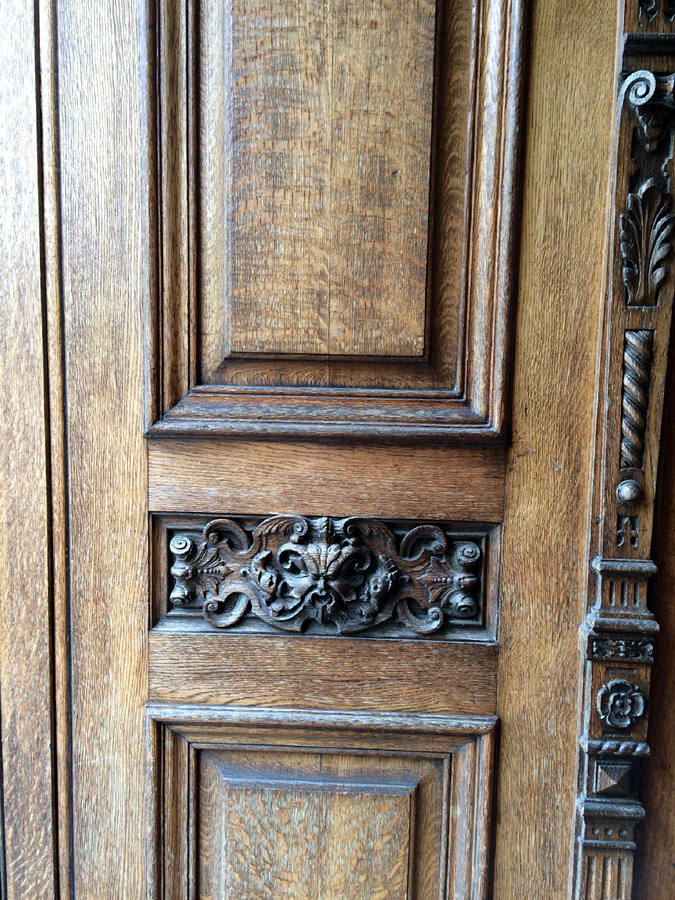 Alas, this was not our building, but a wonderful leftover from a hundred years ago.  Rattling the front doorknob (and taking our first official “interesting door” photo), we could only press our noses to the glass and drool with envy at our imagined stay within.

Our assigned part of the campus was modern and wholly unexciting, but as college dorms go, it was pretty comfortable.  Or would be.  The en suite, 2 single beds room we had been assigned was just large enough for us to enter with our luggage, but not close the door.  It was like Groucho’s Night at the Opera stateroom – it was us or the luggage.  Part of that was my fault; I had brought my giant empty guitar flight case (to quote Chico from another Marx Bros film, “That’s-a okay – we fill it up before-a we leave.”).  Then bad luck turned into good after we discovered a non-functioning toilet and had to change rooms.  Our next was twice as big, with a balcony and incredible view of adjacent Arthur’s Seat. 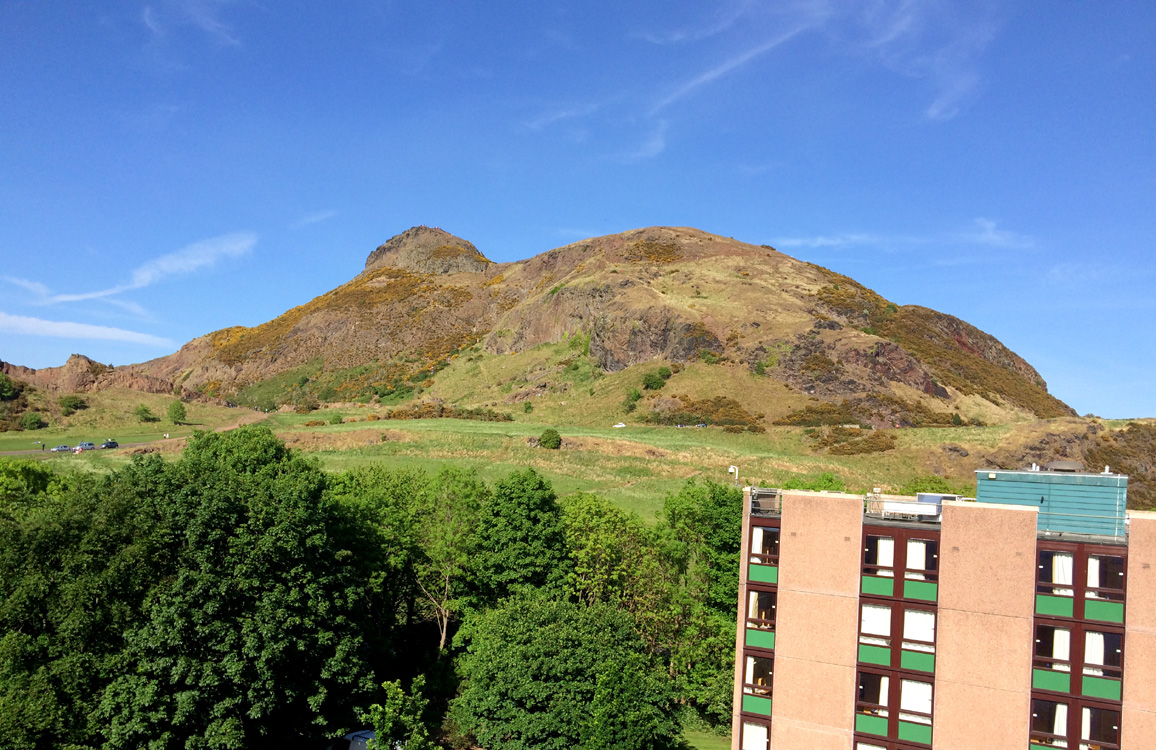 From dawn (5 am) to dusk (9 pm), it was never without its hikers, whether beautifully sunlit or mysteriously wrapped in fog. 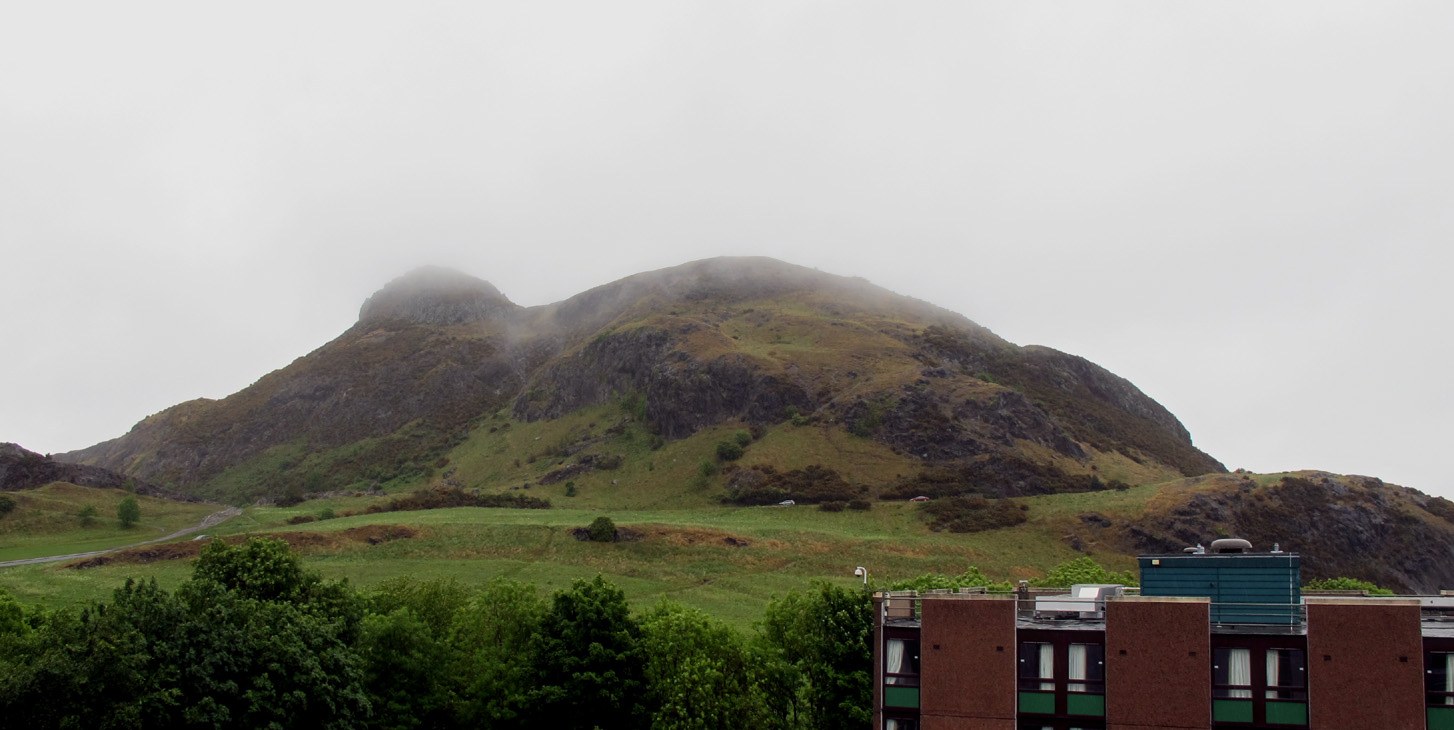 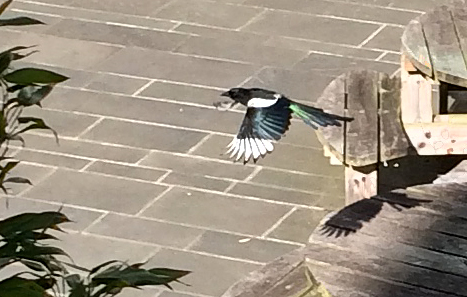 Outside on the grounds, we were immediately greeted by a Eurasian magpie, a beautiful crow-sized bird whose striking black and white coloration masks iridescent blue and green feathers on its wings and tail.  Jaci managed to snag it mid-flight with her phone.  I don’t remember these from our previous trip, but we’d see many during the week.

We shortly met up with several fellow AMIS members and began the 20-minute walk to St. Cecilia’s Hall, the brand new home for the Musical Instrument Museums Edinburgh collection.  Lagging further and further behind the group (AMIS members of every age seem to have evolved into “power walkers”), we had to finally stop and hail a cab.  At this point, Jaci’s 0% cartilage knees are simply no longer hill or cobblestone-resilient.  We’d be spending a fair amount on taxis for the duration (but beating all our friends to our destinations!). 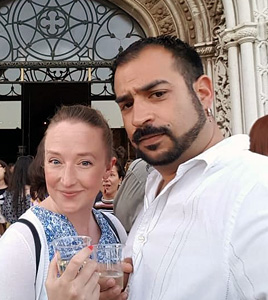 The event was hosted again by the Museum staff, and here I must pause to thank them for this epic and largely unrewarding task.  The legendary Prof Arnold Myers has since retired, but was instrumental (last time for that pun, I promise) in arranging a special Glasgow trip for us, among his many volunteerisms. Darryl Martin has taken over as Principal Curator and has done so admirably (though he admitted he misses “playing with the toys” – the reason we all get into this, right?!).

The complicated event was organized by curatorial staff including Jenny Nex and couple-of-the-year Sarah Deters & Jonathan Santa Maria Bouquet (right).  Most of all, a grateful thank you to Sarah who surely deserves a bonus, if not a year’s paid vacation (pub crawling can only take one so far).

I had to wait until another time when the gallery was cleared out to take this poor iPhone pan photo.

The new exhibit space was laid out in four large separate rooms, with a much more modern look than its previous home.  As classy (and necessary) as it is, I dearly miss the cramped, cluttered large wooden musty cases of the old hall (now empty).  If I could have that whole room disassembled and shipped here, I would!  You’ll see more of the museum (and AMIS gang) shortly.

Next: Playing hooky with assorted birds of prey 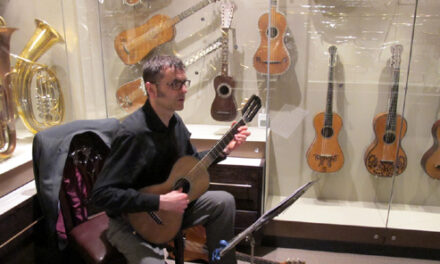 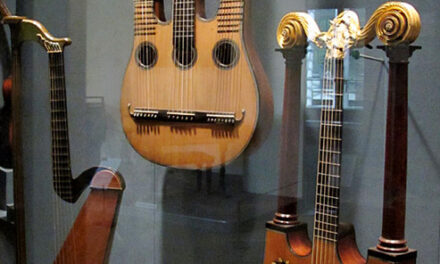 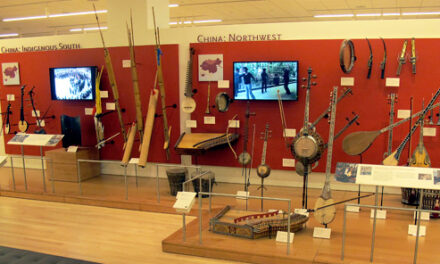 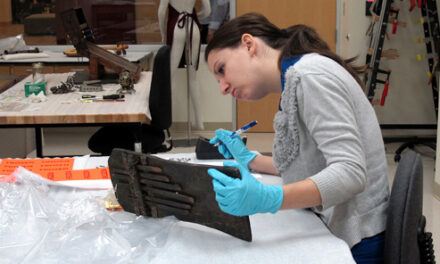