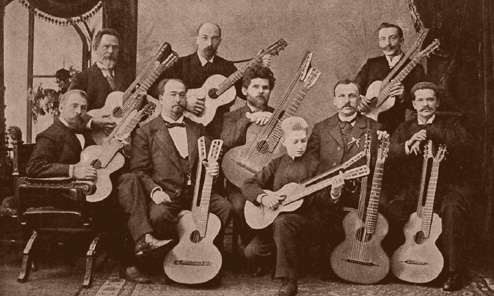 Once again, I find my music desk backlogged with towering piles of new information and images of Russian harp guitarists. In the past our Harp Guitar Gathering friend Oleg Timofeyev donated rare material and information. Lately, another new friend, Ilya Kryzhanovsky, has been bitten by the harp guitar bug and is sending me new material and links weekly.

His latest find is a real treasure; all one has to do is look at this image (How many times have I said how ubiquitous and normal harp guitars were at the turn of the last century?!). But unlike a lot of unlabeled historical images, this one comes with a great new tale. 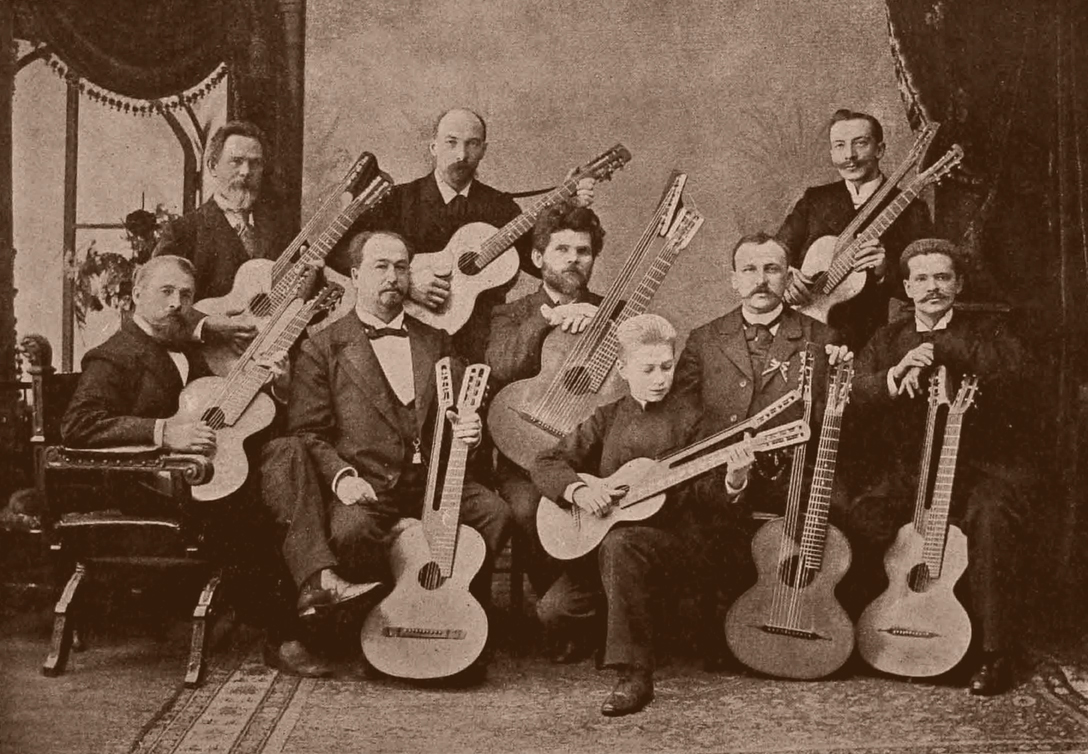 I’ll return to the instruments at the close of this article. The story comes courtesy of Ukraine Victor Tavrovskiy who started the monumental project “Guitarists and Composers: illustrated Biographic Encyclopedic Vocabulary” in 2001, which then expanded into the mind-boggling classical guitarist site “The History of the Guitar as Reflected in its Personalities.” Victor kindly supplied the images and all information came from his web site. (I did a Google Translate clean-up, and wrote a new article paraphrasing details from his. Ilya provided the particular name transliterations and spellings for this article.) 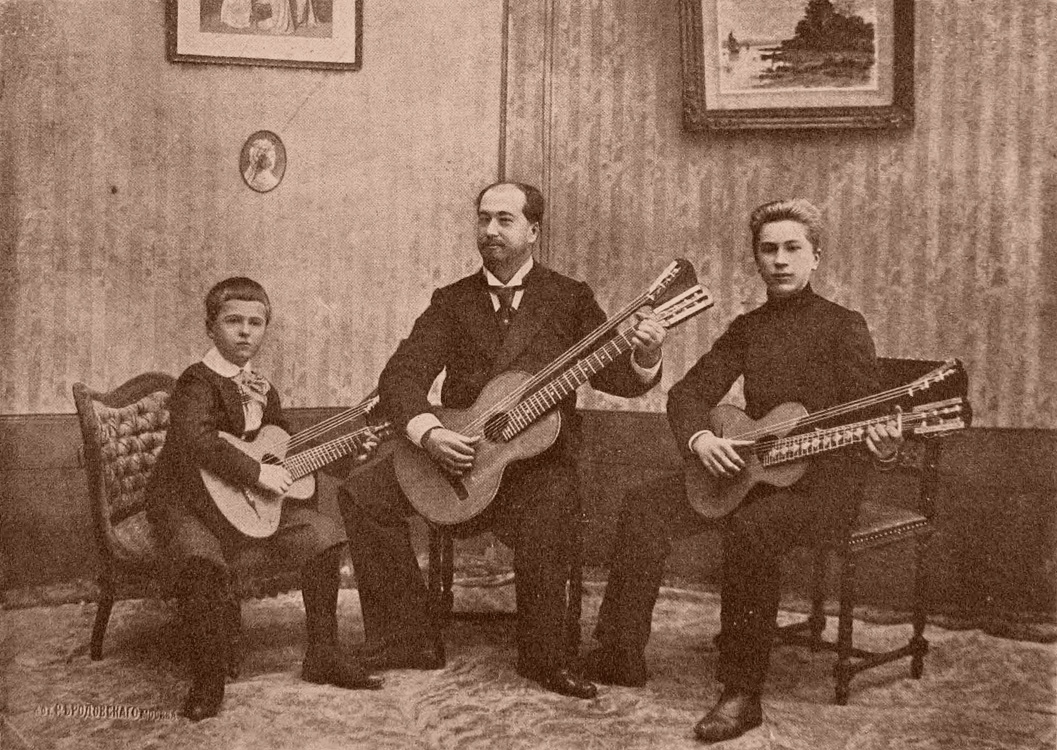 Born in Moscow in 1850, Zayaitskiy had a long and varied career in the city as a doctor of medical sciences, specializing in gynecology. Though he loved music and singing since childhood, he struggled to play the piano, even with his good musical ear. It took him another couple of decades to return to music – when he realized at the age of 44 that his instrument was the guitar – specifically, the Russian 7-string guitar (tuned to open G).

He fell absolutely in love with it, and as a medical doctor, saw additional value, writing, “Music should play a high role in a person’s life. It ennobles the soul and heart, distracts from everyday worries, and guitar music, in addition, acts as a medicine for the nervous system – as the best sedative that I often experience myself. By a different comparison, guitar music is hashish, bromine, morphine – but does not have the harmful effect on the body as the above poisons have.” Indeed! 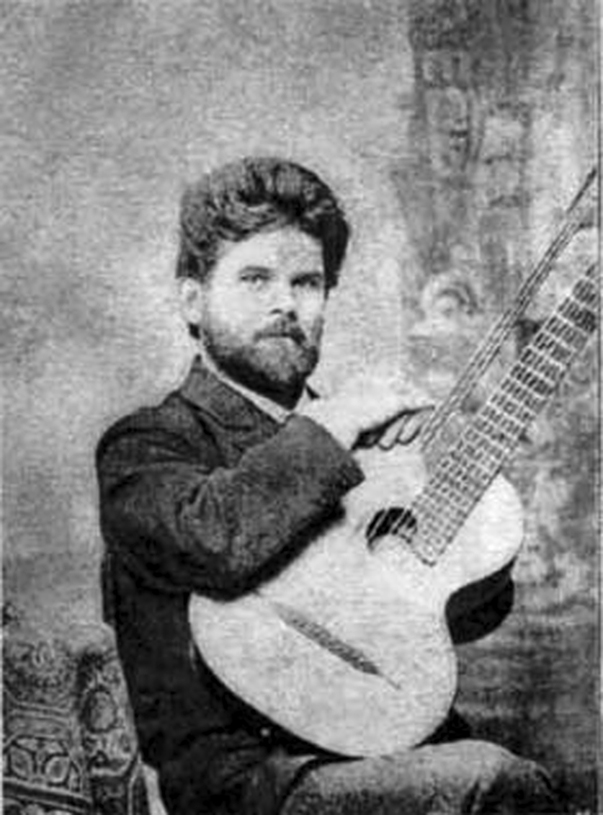 Zayaitskiy became one of the seven-string guitar’s most devoted ambassadors, with a remarkable set of achievements occurring after only five years of amateur playing. He soon befriended the great Moscow guitarist A. P. Soloviyov (at left), and put his musician friend up in his own home for several years. Here, under the leadership of Soloviyov, an informal circle of guitarists was formed to meet Zayaitskiy’s objectives “to talk about the guitar, exchange musical thoughts and impressions, and to perform different pieces on one or more guitars.”

Twice a year the talented group would put on a concert for guests arranged by Zayaitskiy in his Moscow apartment’s “concert hall.” A copy of the program for their morning concert of December 27th, 1899 was sent by Zayaitskiy to his new friends at Der Guitarrefreund, with the magazine including it in the events section the following year. 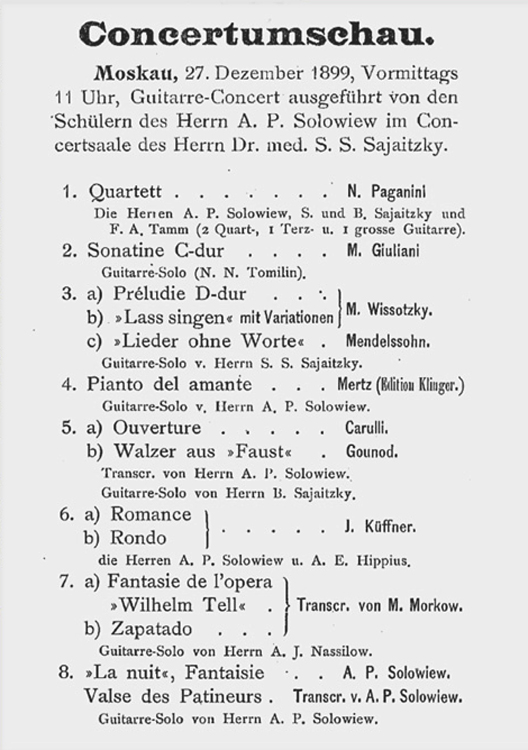 The repertoire consisted of pieces by the previous period of “Early Romantic” guitar composers – Paganini, Giuliani, Mertz and Carulli, with new guitar transcriptions and one composition by Soloviyov.

Soloviyov appears to have been very grateful and generous to his patron, opening the program with a quartet that included himself alongside Zayaitskiy and his older son, Boris. This was followed by solo spots (and one duo) by both of the Zayaitskiys and two other members, with Soloviyov (naturally) closing the program.

Though Zayaitskiy had only been playing for some five years – and his son probably less – they were well thought of. Moscow’s other top guitarist V. A. Rusanov managed to compliment the elder Zayaitskiy, saying “(His) playing was distinguished by softness and sincerity, particularly in pieces requiring expressiveness and a calm pace.” Rusanov seemed more impressed with his son, saying “His playing is easy and free; all sorts of touches, trills, tremolo, glissandos, legato, and natural harmonics amaze with their purity and finish.” 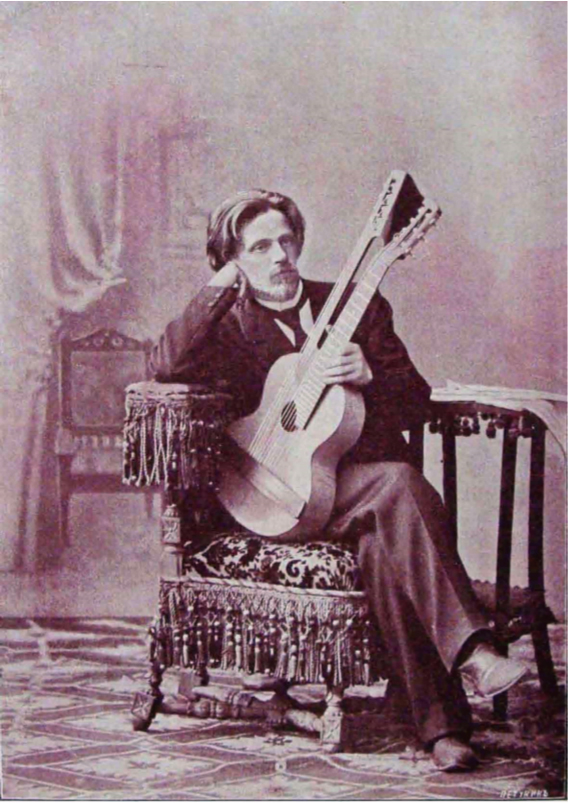 Above: V. A. Rusanov of Moscow, like most aspiring to virtuosity, played the harp guitar version of the Russian seven-string guitar.

In 1899, history was made when the “International Union of Guitarists” was formed in Munich. Zayaitskiy prepared an abstract on the status of guitar music in Russia that was read at their first meeting in September and subsequently published in their magazine Der Guitarrefreund in 1900.

That same year, at Zayaitskiy’s urging, Russia formerly joined the International Union of Guitarists, with himself elected as their representative. (The others to join with him were his son Boris, A. P. Soloviyov, V. A. Rusanov and A. E. Gippius). From Zayaitskiy’s efforts, other branches of the International Union of Guitarists were soon opened in Kursk, Uralsk, Kiev and Tyumen.

In 1902, Zayaitskiy self-published 1,200 copies of the book International Union of Guitarists, which was sent free of charge to guitar lovers. It was filled with biographies and portraits of prominent Russian and European guitarists and composers (including those in this article). He created it with the active participation of V.A. Rusanov, who wrote a significant portion of the biographical essays and authored the majority of the notes.

Perhaps Zayaitskiy’s most important goal was to “to reconcile the supporters of seven-string and six-string guitars.” Indeed, both had become the two main branches of this next phase of the “classical guitar”- but they were separated by a strict stringing and tuning difference. Perhaps Zayaitskiy helped bridge this gap, for soon, both six- and seven-string guitars were offered side by side in catalogs of both German and Russian musical instrument manufacturers and firms. Published music was similarly shared, and guitarists could play the repertoire on the instrument and tuning of their choice. 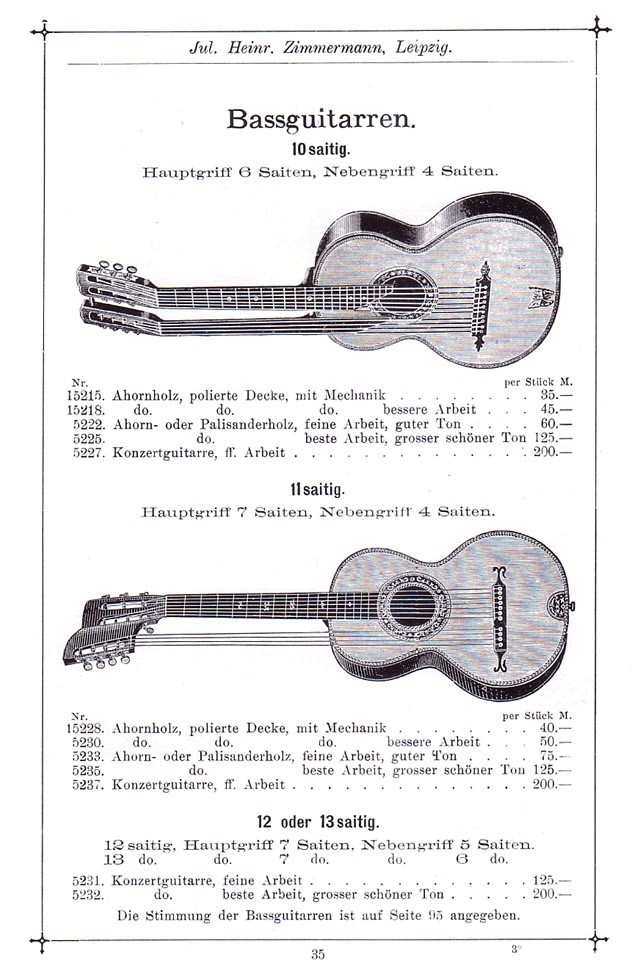 c.1900 Zimmermann Leipzig catalog. Their St. Petersburg catalog from a few years later similarly offers guitars with both 6 and 7 strings on the neck.

As you can see from these images, many – certainly those who were most serious about the instrument – chose the harp guitar variant of their nation’s seven-string.

Let’s return again to the Moscow’s new guitar club and the remarkable photograph likely taken in Zayaitskiy’s home. All but one guitarist plays a harp guitar version of the Russian seven-string guitar. All have three or four basses, with Soloviyov having five. His instrument is curious as its bridge has a deliberate gap between the first three basses and the last two – perhaps meant as a visual and “touch” aide for rapid thumb maneuvering after playing his original 3-bass instrument for so long (as seen in his solo image above; I would surmise that he retained the tuning of those three while adding on two additional strings.

Nowhere does author Victor Tavrovskiy mention “harp guitars” or even floating strings, which is not all that surprising. Again, these instruments were simply the “norm.” Even today, they are all seen as essentially seven-string (on the neck) guitars, the floating basses of varying number being an unspoken “given,” an “addition” that doesn’t merit any particular detail or discussion. This is the opposite of the case of American harp guitars like the more distinctive Knutsens, Dyers and Gibsons, that begged to be noticed and commented on (then and now).

At our Harp Guitar Gatherings, the participants and public have been treated to performances that demonstrate this slightly different variant of European and American harp guitars, i.e.: the Russian “harp guitar.” Not just from one, but three of these players: Oleg Timofeyev, both solo and with partner Vadim Kolpakov, and another occasional Oleg partner, John Schneiderman.

With the Russian guitar’s lowest note on the neck a D rather than E, its “sub-bass” tuning developed differently. It was not only re-entrant (the first bass string higher than the neck’s D), but John Schneiderman theorized that it was also non-linear, not as published in historical catalogs. His reasoning – from study of the scores and dedicated performance practice – is that it makes much more sense (for the thumb and the brain) to have the extra (four) basses paired as adjacent tonics and fifths. With the low strings on the neck, John has three tonic/fifth pairs, thus:

John says he’s finally convinced his occasional partner Oleg Timofeyev of this, the latter having also found some historical evidence for John’s theory. Still, Oleg points out that this option would not have been as common, that “F” was a little used bass note and a final clue that the individual sub-bass nuts on these instruments were arranged linearly (which doesn’t preclude changing tunings around, and was a design feature likely borrowed from Schrammelgitarres, but is worth mentioning). Interesting to weigh all this! Thanks to John, I’ve updated this site’s Historical and Modern Tunings page with all of the known Russian harp guitar tunings (including his extrapolated tuning for Soloviyov as discussed above)

As with Viennese guitars and harp guitars, there are also terz and quart tunings, i.e.: a minor third and a fourth above standard. While it may seem strange that a higher-pitched instrument would still require bass strings, harp guitar variants of the two were indeed built and had added value. John Schneiderman says “I have found a number of Russian scores that use additional basses on the quart guitar, and have also found a few examples of European terz parts with additional basses as well.” No surviving examples of these instruments are known, so John had a reproduction 11-string quart built by luthier Jan Tulacek, and has a ordered a terz Viennese version as well. Zayaitskiy’s two boys clearly have much smaller instruments, and John believes they are quart-size. Perhaps Dad wanted the family trio to be able to play trios with the full range and tonality of standard, terz and quart tunings. 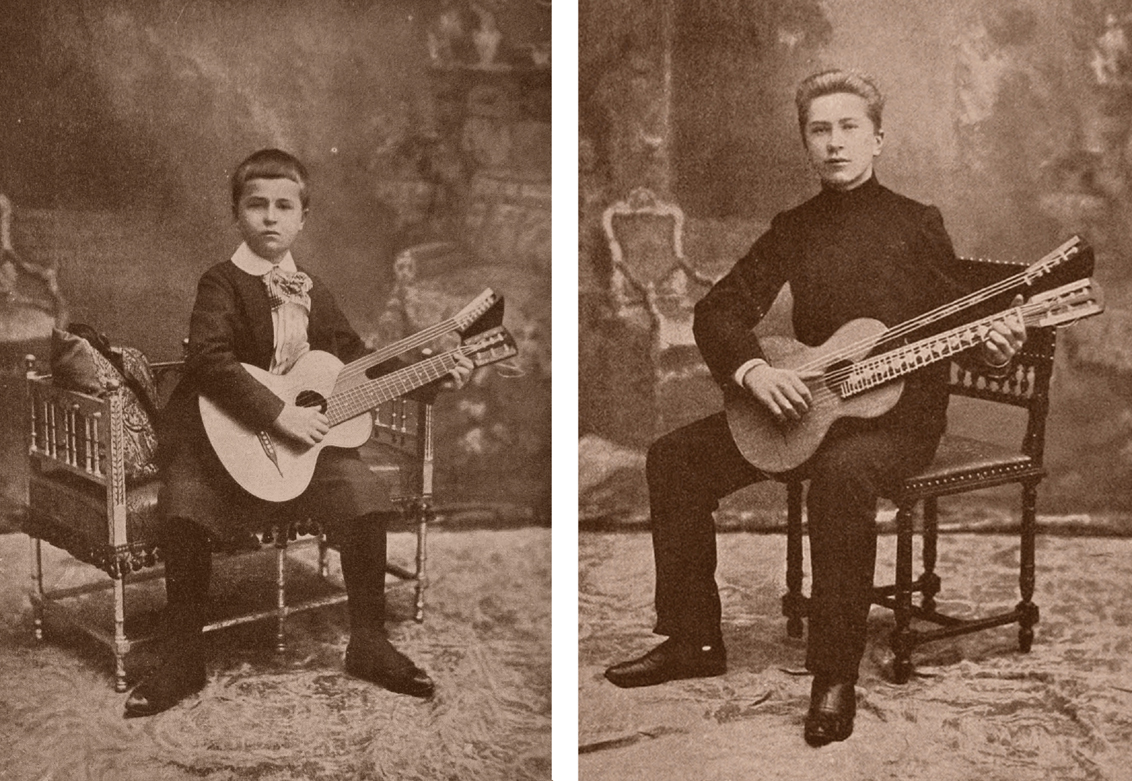 S.S. Zayaitskiy’s children (he also had two daughters): Sergey (left) with a 4-bass instrument and Boris with 3 basses. Both are small instruments. Note the unusual decorated fretboard of Boris’.

The elder Sergey passed away in 1910, ending his guitar activities much too soon. Nothing much is known of Boris, but the younger Sergey became a well-known playwright, humorist, poet and writer, with a number of successful plays and novels.

I’m not much up on Russian literature, but I would love to find that set of Zayaitskiy harp guitars! 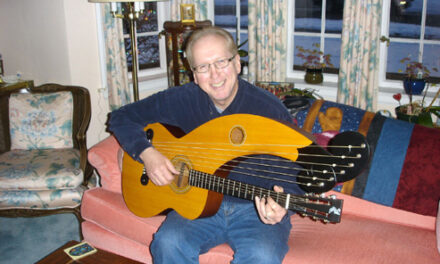 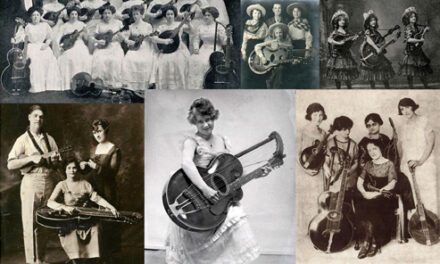