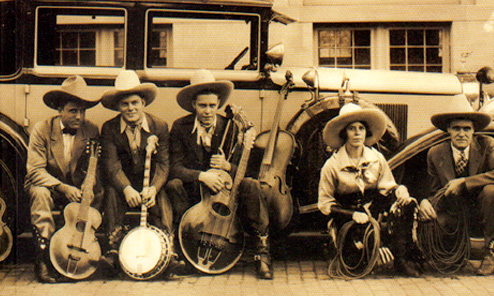 This is a fun one!

My friend Joe Morgan spotted the intriguing cover of this book one day…The Oklahoma Cowboy Band, from 2008, one in the increasingly fascinating “Images of America” series.

Who were they?  And what was a Gibson harp guitar doing in a Country and Western group?!

The latter question is never addressed in the book (despite the many of images of it), nor it seems, during the band’s heyday.  It was apparently just one of the countless guitars, mandolins, banjos and fiddles passed around by the many group members over their ten-year career.

It all sprang from a small group of amateur musicians in and around the town of Ripley, Oklahoma who got together for dances and jam sessions in the early 1920s.  When an impromptu request to appear on the new radio station in Bristow came up, local cowboy legend Bill McGinty was asked to lend his name to the group, and Billy McGinty’s Cowboy Band was born.

McGinty was well regarded as one of Teddy Roosevelt’s Rough Riders in the Spanish-American War, and later was both a working cowboy and a performing cowboy – bronco-busting to the world’s record in Buffalo Bill’s Wild West Show.  By 1925, he had retired from that life and settled in Ripley.  Though McGinty was neither a player nor singer, he was – excuse the pun – effectively roped into the new band for his name recognition.  He would be the band’s namesake and announcer, with the occasional rope trick thrown in for good measure.

McGinty is seated at left, Otto Gray on the right.  This is probably the earliest photo with the Gibson Style U – the fellow holding it is Nealy Huff.

McGinty soon dropped out, but his friend Otto Gray, another former cowboy and later businessman/farmer in nearby Stillwater, took over as bandleader and manager.  The name was thus changed to “Otto Gray and His Oklahoma Cowboys.”  Like McGinty, he neither sang nor played an instrument beyond some occasional guitar chords, but M.C.’d and did rope tricks – as did his wife, Florence (“Mommie”), who also sang the group’s melancholic songs.

Under Gray’s leadership, the group flourished, becoming quite successful on record and in vaudeville, touring extensively in a series of increasingly elaborate automobiles (Cadillacs and others) customized with loudspeakers, steer horns and even a cowcatcher!  Ultimately, they were heard nationwide on over some 130 radio stations.  Apparently the first country western band to dress up as cowboys – as the original members all were actual cowboys – they were the first such “Country and Western” group to perform on radio, making the cover of Billboard in 1931, and were soon imitated everywhere.

Band members came and went, especially when the group began travelling extensively.  Everyone played multiple instruments, including Owen Gray, the leader’s young 6’4” son, who with his parents would remain the only core member of the group (not counting Rex, the “wonder dog”) until its disbandment in 1936 (that’s Owen with the harp guitar in the previous three photos). They started out with generic guitars and mandolins, but soon – undoubtedly thanks to their rapid success – were using various Gibson instruments, along with at one point a Lyon & Healy mandocello and a National tri-cone guitar (which had only just been invented).  By this time in history, secondhand Gibson harp guitars were probably a dime a dozen, so perhaps the group picked one up for its visual stage presence.  It certainly doesn’t seem like it would have been a staple in old-time fiddle bands!  Though, who knows?  On this site’s Iconography pages one can find plenty of rural musicians with harp guitars, including the originally-expensive Gibsons – enough to suggest that once mandolin orchestra players started dumping them, they became affordable used guitars for those looking for something a little more flamboyant!

Wanting to discuss its anomalous appearance with the book’s author, Carla S. Chlouber, I was saddened to learn that she had passed away five years ago, soon after her remarkable book was published.  It remains a delight, and includes scores of photos of the band throughout its many incarnations, including numerous images with the harp guitar, which are shown here.

A fiddler named Johnny Bennett was in the group for a couple of years and seems to have briefly appropriated the Gibson, even painting (?) his name on it.

…but the Cowboys had done it eighty years earlier!

There is a wonderful 2-part video on YouTube of a rare c.1929 film of the group in action.  The harp guitar is not present, but you can see them doing their cowboy comedy, instrumental trick-playing, and, well…who doesn’t love a vaudeville act that includes a live skunk?! 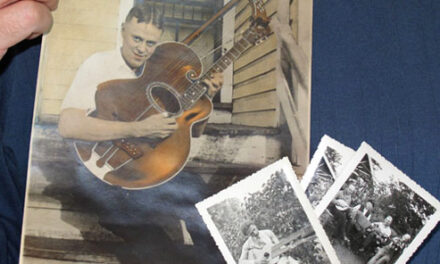 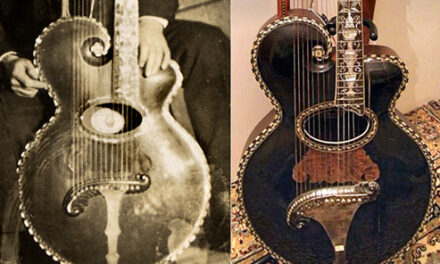 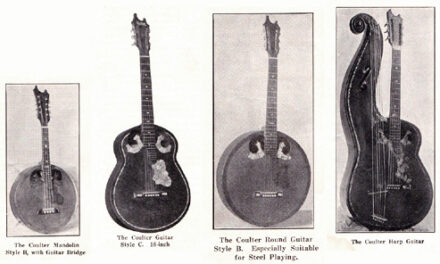 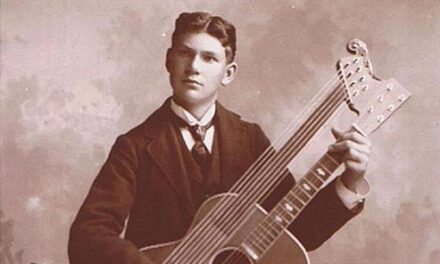