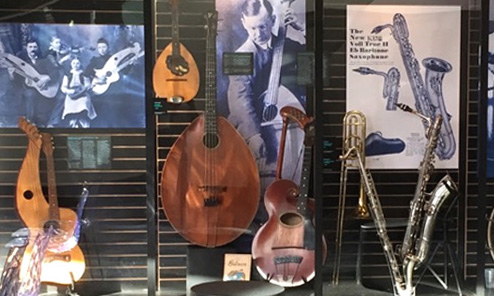 This is going to be just a quick blog on this year’s NAMM in Anaheim, as my visit was very short (I actually now skip it most years).  I showed up at the crack o’ dawn last Saturday morning in order to “take a meeting” with the staff of the Carlsbad, CA Museum of Making Music.  Alert readers will recall that this is where we’re holding the Harp Guitar Gathering two years from now (this year we’re in Milford, CT, the honorable Stephen Bennett presiding, Jeff Martin probably not attending). 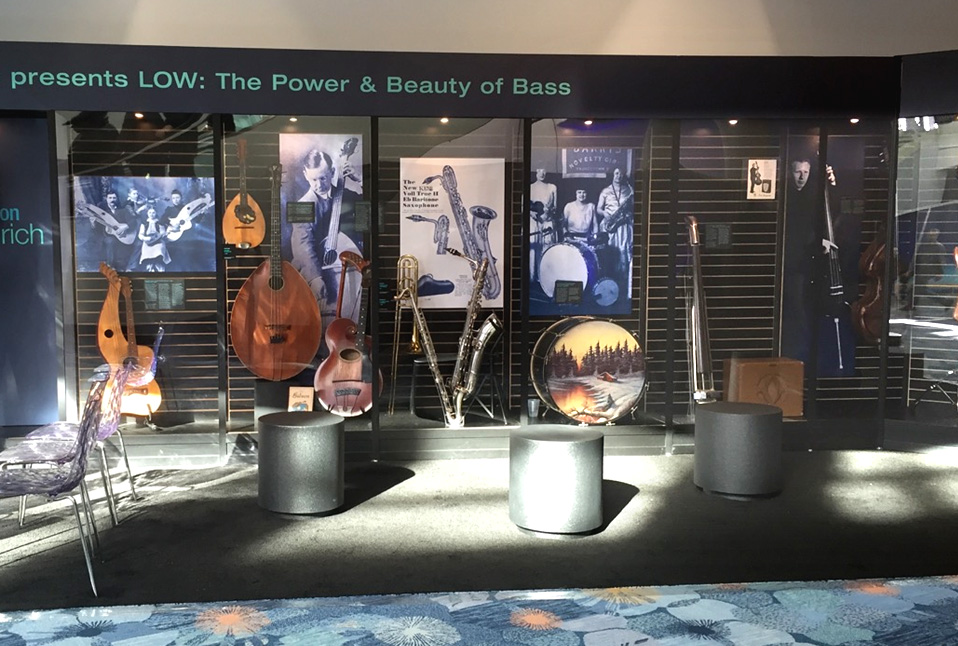 The doors hadn’t opened, so we met in front of their lobby exhibit – an excerpt of their currently-running special exhibit “Low: The Power & Beauty of Bass.”  The meeting went great (all I can say is we’re cooking up a little surprise for HGG15 attendees…).

NAMM remains a highly entertaining musical version of Comic-Con – with hilariously outlandish heavy metal costumes in place of superheroes and Star Wars characters.  The difference being that this is their normal attire. Hard to believe in this day and age, but there it is.  I apologize for not taking more photos.  Mercifully, the “man-bun” does not yet seem to have reached the event.

And I forgot my earplugs (the only thing that enabled me to stay a full day on previous visits). 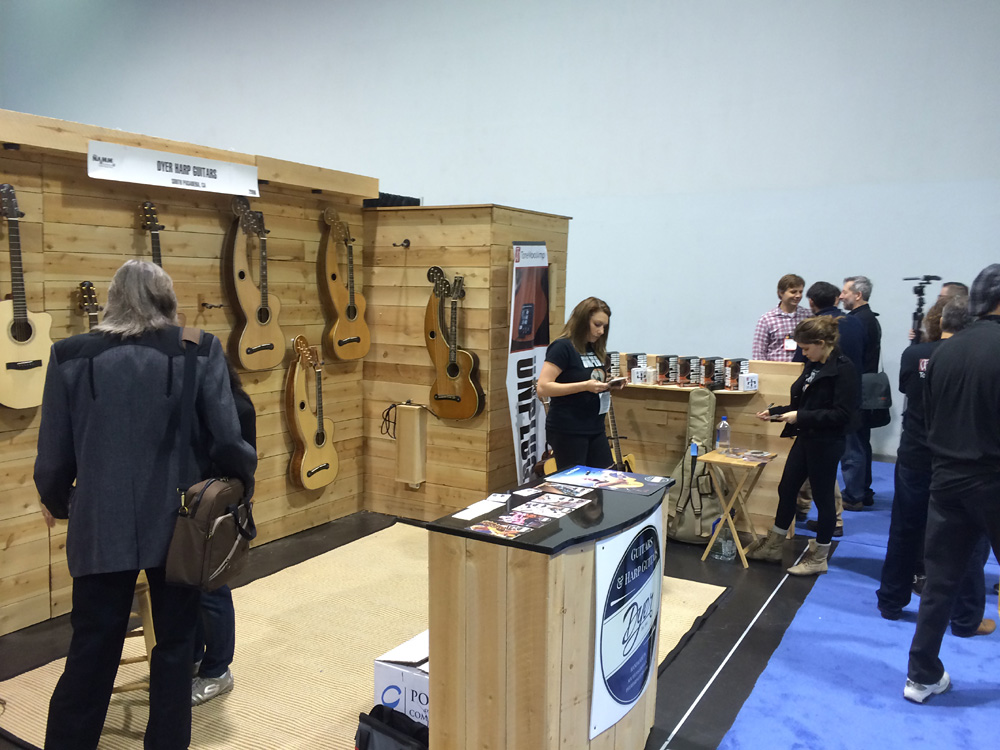 Poor Scott Holloway (at rear) found himself in a new spot on the back wall upstairs smack in the middle of drum and electric guitar and bass dealers.  Each one simultaneously demoing their instruments.  It wasn’t so much a “wall of sound” as a “barrage of mud.”  Andy McKee and others gamely played the wonderful new Dyer instruments for the onlookers, musical challenges I’m glad I wasn’t around to witness.  Fortunately Scott had a tiny sound-dampening booth to try out instruments. 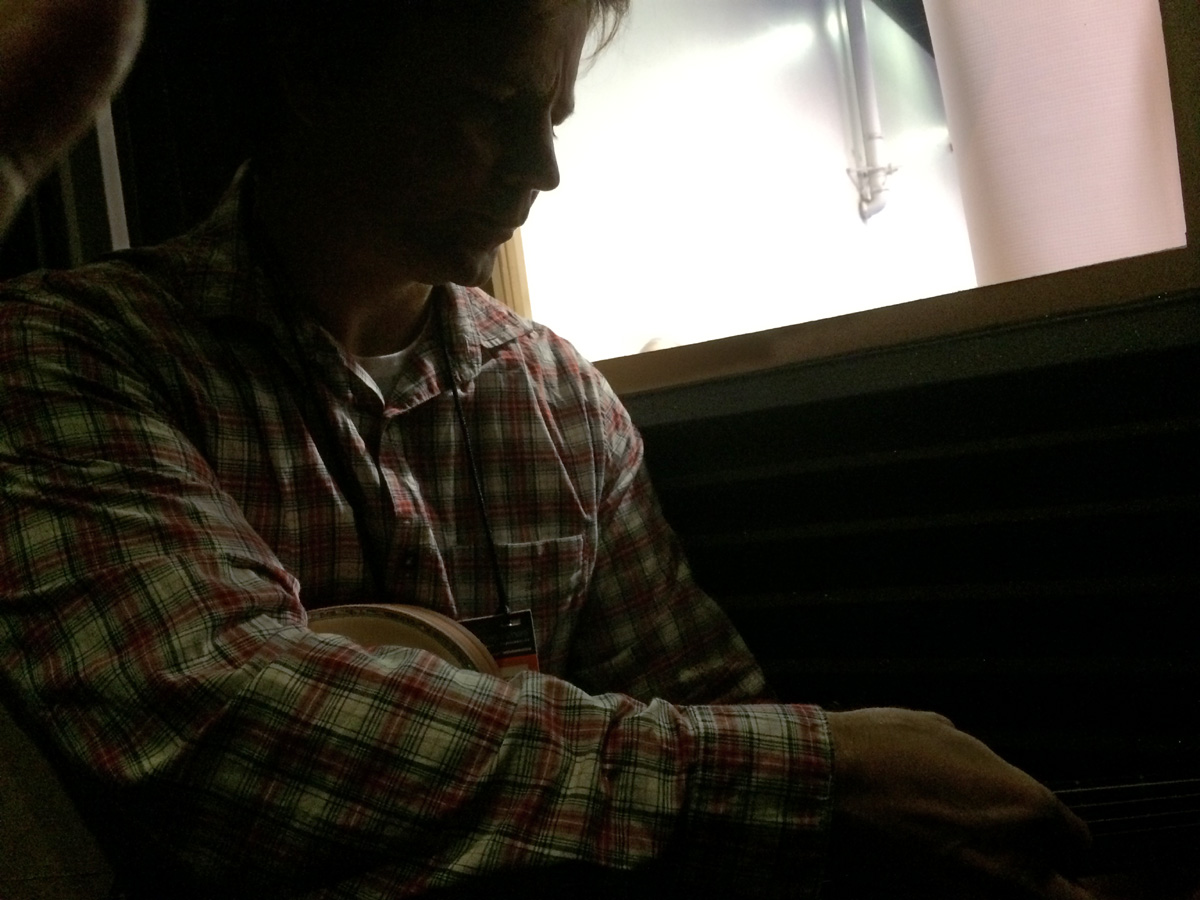 We went in there for a (highly intimate) demo of this new ToneWoodAmp invention he’s raving about (their company was sharing his booth space).  Installed on the back of a harp guitar via a magnet (one affixed inside the instrument) it made it almost twice as loud while adding a heavy dose of reverb (all manner of effects are available).  I need to give it another try in normal conditions, as the “auditorium-in-the-soundhole” effect was a bit disorienting. 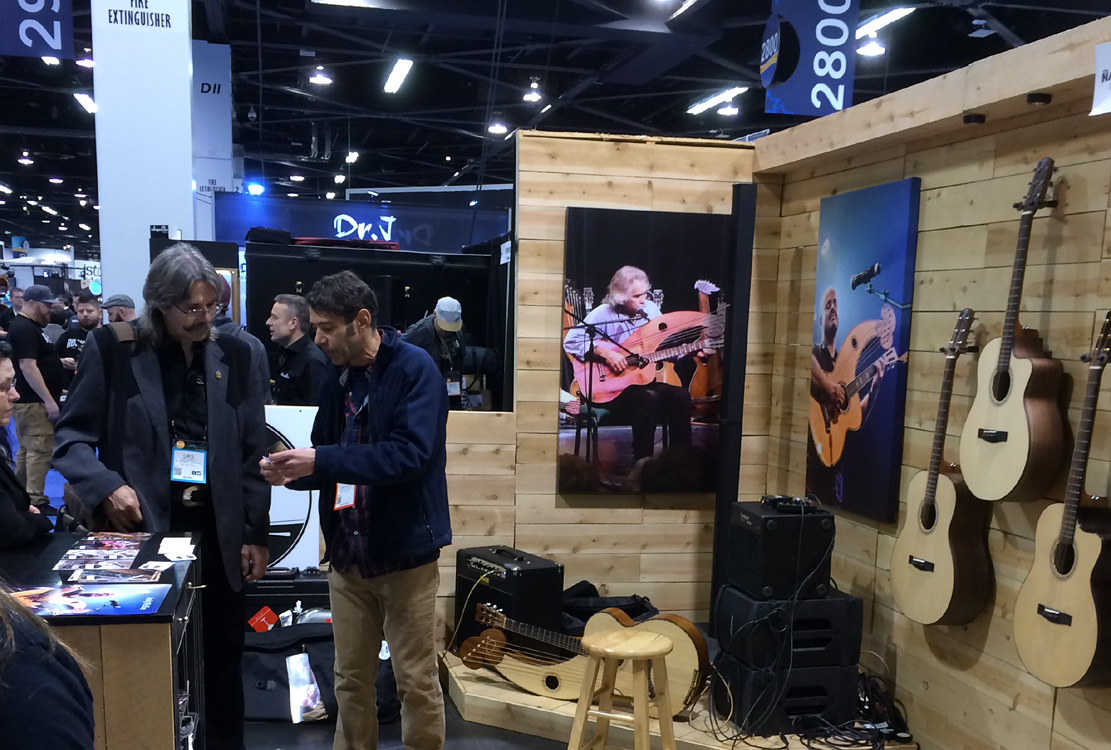 There’s Dyer partner and builder Jim Worland on the right…

Their latest Style 8 has impossibly killer koa on the back and sides (image on their site).  Fortunately I had seen, heard and played the brand new Dyer baritone at Scott’s last month.  A home run – and everything Andy McKee says it is. 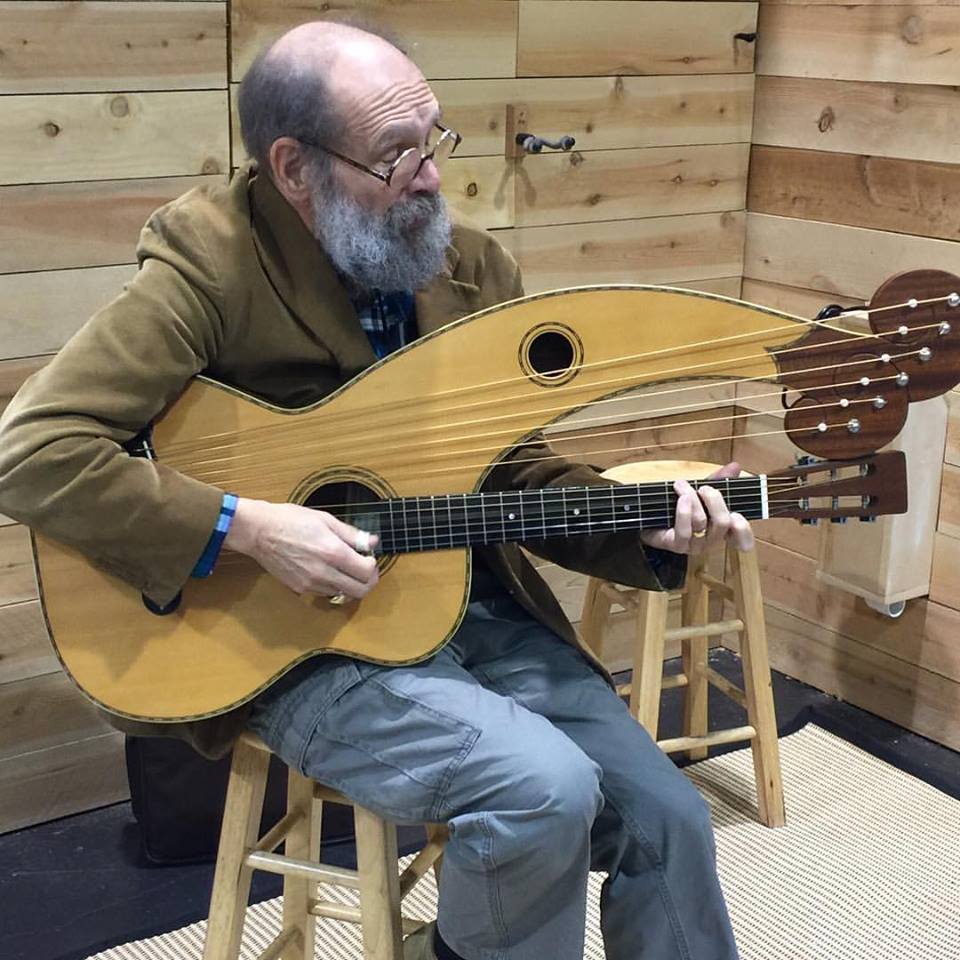 I strolled through barely 10% of the halls and aisles on this visit; I just wasn’t enjoying it as I have sporadically in the past.  So many friends and dealers were absent (plus a couple no longer with us).  Nor could I stick around to try and locate those I knew were there during the weekend – fellow harp guitarists Andy McKee, Don Alder and Muriel Anderson, for example.  I also missed connecting with famed luthier Steve Klein (whom I’ve never met) and Tim Bertsch, who recently sent me his new CD played on a killer Knutsen harp guitar.  Here he is at NAMM playing his Emerald.

There were more ukulele dealers than ever before, but seemingly fewer acoustic guitar dealers (and everything looked so dang glossy).  Nothing remotely caught my attention beyond the new modern n’goni booth, and again, the ambient noise kinda killed that buzz for me. 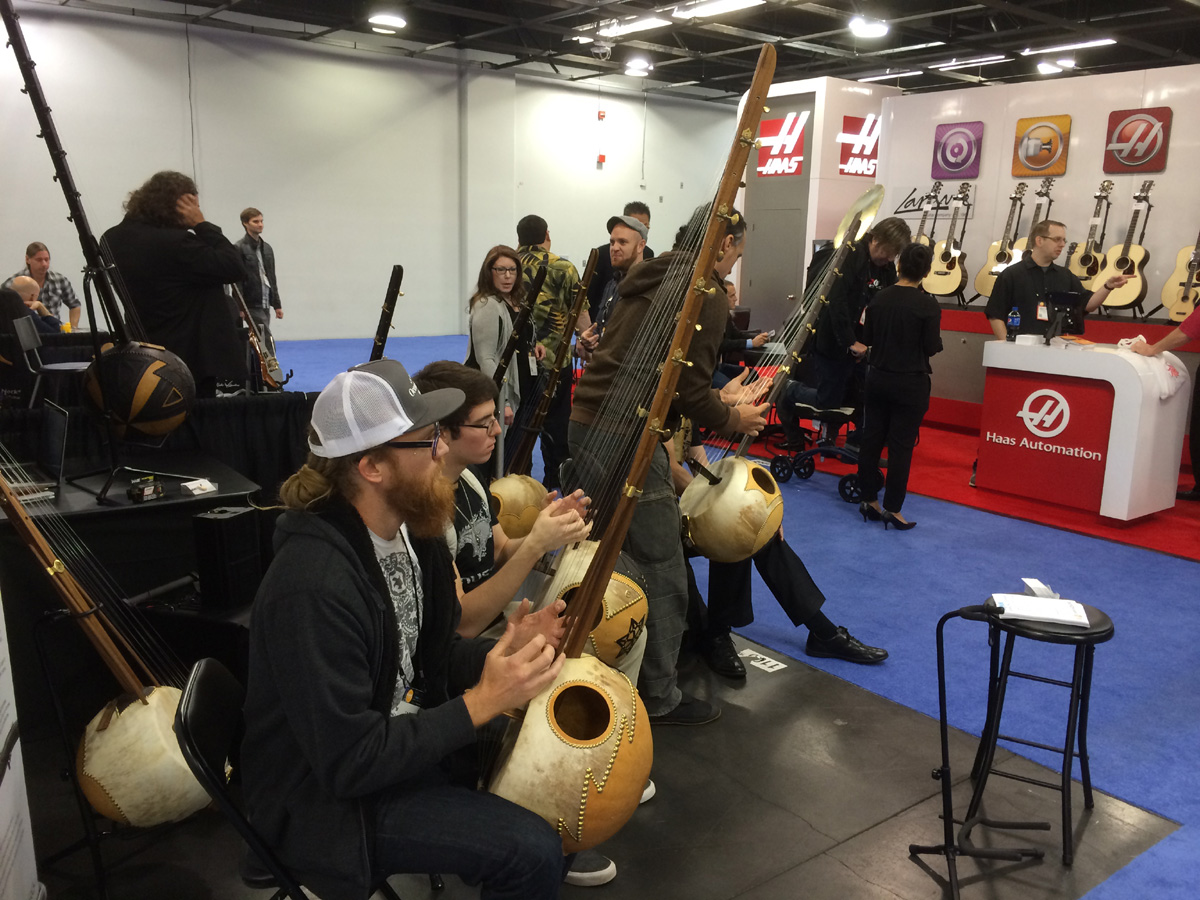 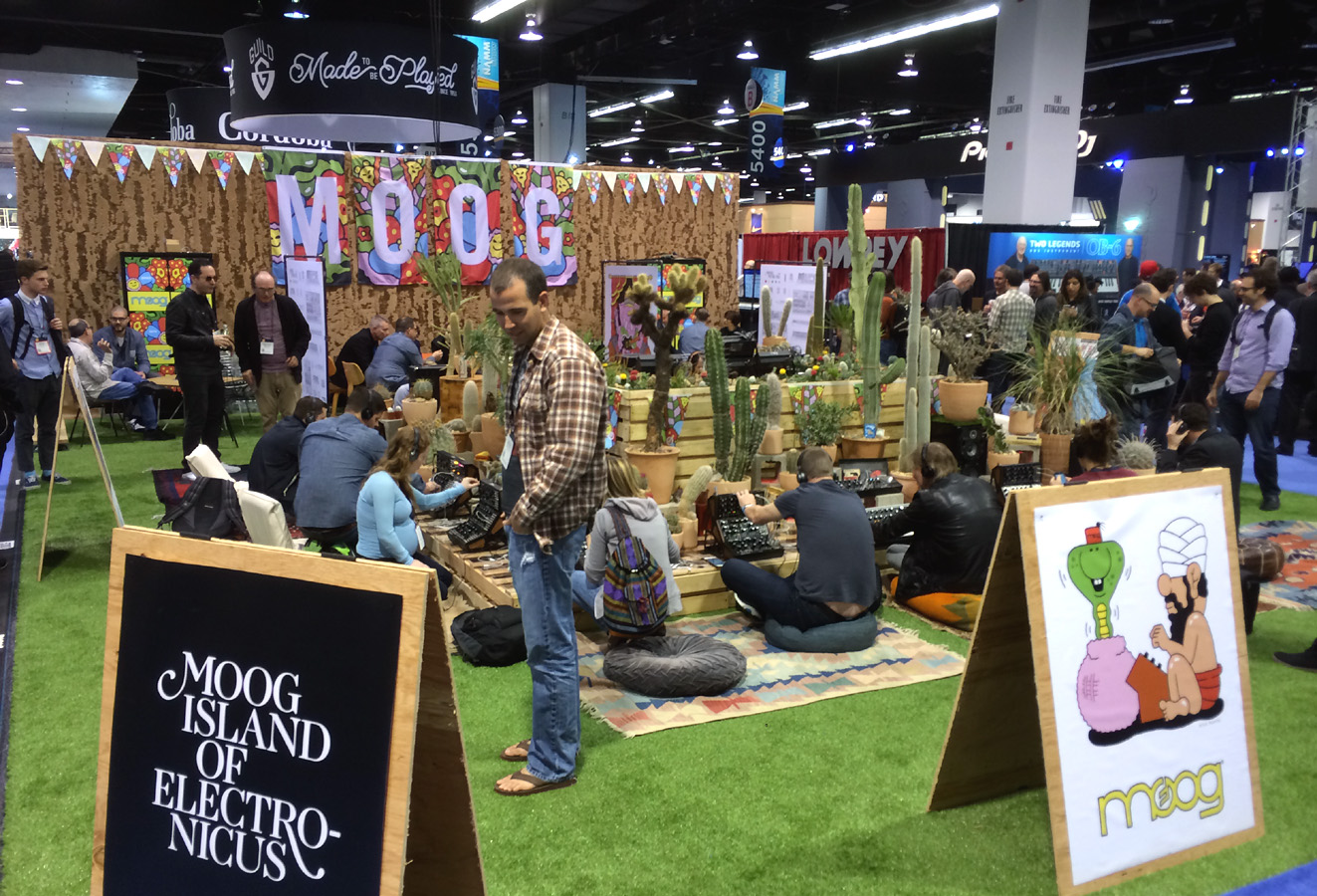 I didn’t know Moog was back, and they certainly had the hippest booth!

Wish I had more to show you, but I had to bail (and couldn’t take much more).  NAMM fans can undoubtedly find much more goings on at many other web sites. 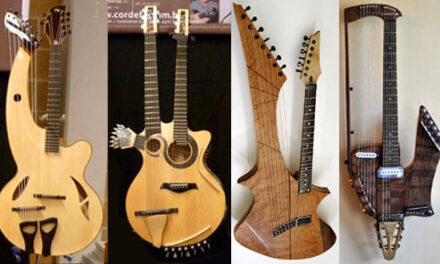 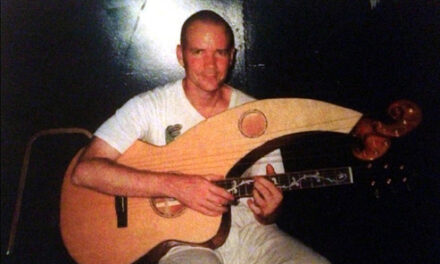 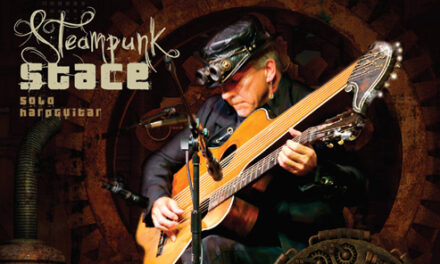