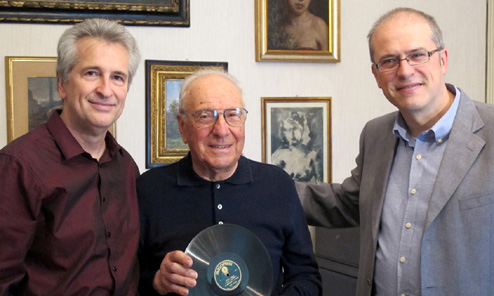 Our traveler’s luck held out once again and our entire trip – both in Genoa and next in France – served up beautiful sunny temperate weather.  Unfortunately, the previous day’s strolls and luthier visits were pretty much the last time I would see the Italian sun…for I was ostensibly in Genoa to work and not play!

As you may recall, three years ago (for our second visit to Genoa in 2012) Franco Ghisalberti had organized a wonderful public presentation on Pasquale Taraffo.  Franco was – and remains – determined to remind his fellow citizens of the importance and uniqueness of the legendary Genoese harp guitarist.

Many of us took part, including Beppe Gambetta, the Genova Mandolin Orchestra conducted by Eliano Calamaro, and professional classical guitarist Fabrizio Giudice, whom I had very briefly met and spoken with on our first 2010 trip’s public harp guitar display.  After the 2012 meeting, again with too little time available, Fabrizio shared with me a couple of very specific techniques he knew about that Taraffo used.  I was fascinated and made a mental note of it.

In November 2013 – after a brief attempt to present Taraffo’s music via another guitarist (whose sole work remains archived on the site) – Franco organized a small public demonstration for Fabrizio to play and discuss what he had learned of Taraffo’s repertoire and techniques.  I had already had something similar percolating in my head, and when I viewed Franco’s DVD of the event, I understood (even without actually comprehending a single word) that this was what I needed to somehow archive and share with guitarists everywhere.

And so we would!  I was here in Genoa in May 2015 to meet Franco, Fabrizio and a small team of volunteers to create footage for a new bilingual documentary.

A bit about Fabrizio: Some of you may remember that he had previously attempted to disseminate Taraffo’s arrangements in the first (and only, to date) folio some years ago.  It was arranged only for 6-string guitar, as Fabrizio (and the intended audience) played only that standard instrument.

Ironically, since that project was completed, Fabrizio – a virtuoso 6-string classical player – has become quite a capable harp guitarist, able to play some of Taraffo’s music on 3- or 4-bass instruments.  Notwithstanding, the techniques he would be sharing are mostly specific to just the right hand on the neck strings.

To save on costs (most of the budget will be spent on editing back here at home), we set up in Franco’s partially-vacated living room, Jaci helping me come up with three different “sets.”  Franco’s friend Paolo shot in a simple 2-camera video format.  To communicate between me, Franco, Fabrizio, Jaci, and Paolo required at times up to three translators – professional Bernard Patrick (an Italian-speaking ex-Brit), neighbor Luca, and later Chiara.

Fabrizio and I waiting with bated breath for Bernard to untangle a particularly vexing translation.

It was all, as you can imagine, a bit challenging.  Fabrizio and I could understand each other some when discussing guitar and musical topics, and I tried to incorporate as much natural back-and-forth conversation as I could.  For the end result, the audience will hear me speaking English, then Fabrizio and Franco speaking Italian, with our respective language sub-titles inserted underneath.

Poor Jaci had planned to go sightseeing for the day, but I was forced to draft her into performing simultaneous duties as director of photography, set dresser, costumer, script supervisor, grip and propmaster.  Good thing she works in Hollywood.  Having earlier created our rough outline (which Franco and Fabrizio had agreed to) I got ensnared in the role of writer and director.  Despite our advance brainstorming, however, there was no way I could really prepare until I had met with Fabrizio and talked at length through an interpreter about his knowledge, suggestions, abilities and viewpoints.  This we finally did Tuesday afternoon, the day before the shoot, and it went extremely well.  It gave me a warm dose of confidence and a flurry of ideas – all I would need was a month or so to formulate them into a workable documentary structure and script.

While Franco paced his apartments, pulling his hair out, Bernard was assuring him that I had everything all worked out.  Somehow, I managed to organize and storyboard the whole thing in my head that night while I lay paralyzed in bed.  At dawn, I stumbled to Franco’s computer, where for the next couple hours I succeeded in frantically typing up a working “script” for us.

Still jet-lagged, and with barely two brain cells to rub together, I got through it, and Franco was a fine sport!  The crux of the project – the guitar technique demonstrations by Fabrizio (discussed and performed after playing the 78 record of Taraffo performing the exact same part) were captured much as we had envisioned.  Mission accomplished!

We even pulled off a quickly-rehearsed experimental duet of Genoese gut-strung harp guitar-meets-American steel-string harp guitar performing a Taraffo composition.  I’m now starting to go through the “dailies” and anxious to see this project through.

Our “stars.”  Videography is complete!

Next: A final day in Genoa to rest, recover and visit 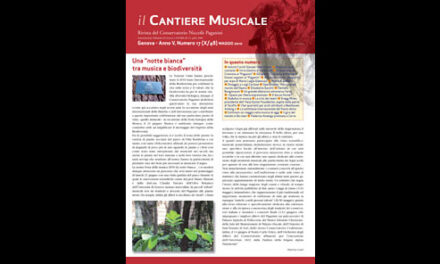